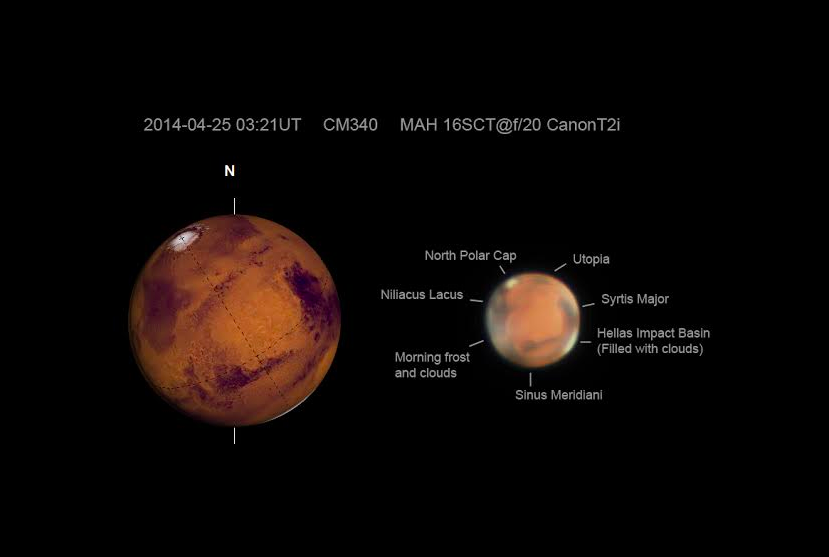 Several factors recently converged to allow for a decent picture of Mars to be taken at the Mary Aloysia Hardey Observatory.  Better sky conditions, software, hardware and refined imaging procedures all helped attain this image. Most importantly, Mars finally presented an interesting and feature-rich side Earthward during this session. Most features on Mars’s have Latin names but there are exceptions.

Some highlights from this Mars picture are:

Near the South Pole is a huge impact basin named Hellas. Hellas is Greek for ‘Greece’ and was formed by an asteroid impact 4 billion years ago. It is 1400 miles in diameter and is the largest impact crater visible from Earth. This lowland is often filled with white clouds and can be mistaken for the south polar ice cap. Originally it had me fooled too, but I confirmed the white feature in this image was clouds. I confirmed this by researching images taken by others on this date, and from using Mars maps like the one to the left.

Also identified were ground frosts and clouds on the morning left-most limb of Mars.

Syrtis Major is the most prominent feature on Mars. It resembles an upside-down continent of Africa when seen near the center of Mars’s disk. It is near the planet’s right limb and is setting as seen from Earth in this view.

Sinus Meridiani is my favorite feature on Mars. It looks like a spoon and is sometimes referred to as the eye of Mars.

It is summer in the northern hemisphere of Mars. The north polar ice cap is shrinking as water and carbon dioxide ice gets exposed to sunlight.

Although I am very pleased with this picture of Mars, I think even more detailed images are possible with practice.