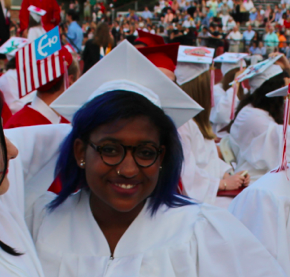 “This is your final warning!” “This is a War Cry!”

It is virtually impossible to feel safe in our modern society, as a Black person. The year may as well be 1954, because the paranoia of being gunned down at any moment, for anything as “wild” as playing your music too loud (while simultaneously black) or walking down the street (while black) seems to be just enough to deserve death.

My name is Alleyha Dannett, I am a graduate of Greenwich High School’s Class of 2014, and I am livid and afraid.

Living in an affluent, predominantly white and conservative town, is frightening when you are young, black,(female) and liberal. The fact that I live in a town where many people think that the Trayvon Martin verdict was truly just, is positively terrifying. I am the minority racially, and because I am not affluent nor a man, my voice is that much less important/heard. I am afraid for my life, and the lives of my brothers, and mother, and cousins. Because how am I to know that I may not be the next Renisha McBride? An injured black woman who went knocked on a stranger’s door after a car accident and was shot down through said door? How am I to know that my brother will not be executed on sight for walking through a “white area” while Black, therefore instantly making him a suspicious person?

As tragic and heartbreaking as it has been to lose one of the greatest creative minds and performers of our time, Robin Williams, the fact that mainstream media outlets would rather cover that repeatedly, and shed no light on the plight of the Black American in Ferguson, Missouri, is degrading and insulting.

Michael Brown was an unarmed black teenager who was supposed to be starting college, but instead was murdered by the Ferguson Police Department. That is a fact.

The protesters demanding Justice have, for the grand majority, been peaceful. That is also a fact.

Other than a water bottle and a brick being thrown, the police have been unprovoked by the citizens of these quiet neighborhoods, where they (the citizens) are now actually being attacked (I am Mike Brown, Live from Ferguson, MO) with everything from tear gas canisters, to rubber bullets, to smoke grenades to ear piercing sirens by police geared up in SWAT Team uniforms.

These people are unarmed, not dangerous, and as a matter of fact, breaking absolutely no laws. Which begs the question, who is in need of this level of protection? As in, who is it that the Ferguson Police are protecting, and from what/whom exactly? From the angered, though unarmed, people who are neither violent nor provoking violence, but are merely demanding justice for a brutally slain teenager?

According to the New York Times, the name of the officer who killed Michael will not be released because “the officer required protection after numerous death threats had been made”, but of course it’s completely acceptable to turn this calm area into a regular war zone, complete with tanks and automatic weapons.

The wife of Ferguson’s Chief of Police allegedly called Black people, “feral”, which is rather confusing when Ferguson is a mostly black town, with majority white politicians and police officers, who incited and have continued the abuse on said so called “savage” people. The vicious, bloodthirsty, menacing, and ever so predatory people in this situation are not the ones with their hands in the air, and smoke in their lungs.

And this is more than just an extensive police brutality issue with total lack of regard for the personal property, let alone well being; it has transformed into a Reproductive Justice issue as well.

Black Women in particular are legitimately wary of having children due to the incessant attack on Black Americans. No one wants to bring a child into this world if they are paranoid that their child will shot in the face before they even get to turn nine (The Tragic Story of Donale Maiden Jr: An American Tale of Gun Violence), let alone get to graduate high school, or go to college. No one.  How am I supposed to feel like a human, let alone a person of value, if my choice of childbearing is inherently taken away from me by the institutionalized racism and bias against Black people, and the laws enforcing and legitimizing said views? I personally do not want children, but in the case that when I am older and accomplished I might. There should be nothing and no one stopping me, especially not fear of Police Brutality.

How am I also supposed to feel like a person who matters as a young Black woman, when the news outlets seem to only choose pictures that are the most alarming, “thuggish”, or promote the worst of Black stereotypes. Choosing pictures that have marijuana, alcohol, or perhaps an inappropriate hand signal like the “peace sign”, over pictures of volunteering, receiving diplomas, or generally anything that does not reinforce our institutionalized and subconscious racial bias.

As far as I am concerned, I am Mike Brown, I am Trayvon, I am Renisha. Until the plight of and brutality against Black people, especially that of Black women, gets its day in the sun, I am unequivocally in solidarity and support of not only my brothers and sisters in Ferguson, but wherever it happens next. Because, truth be told, it’s scary being Black.