The event was hosted by the Greenwich League of Women Voters, and was also attended by state senator Scott Frantz. 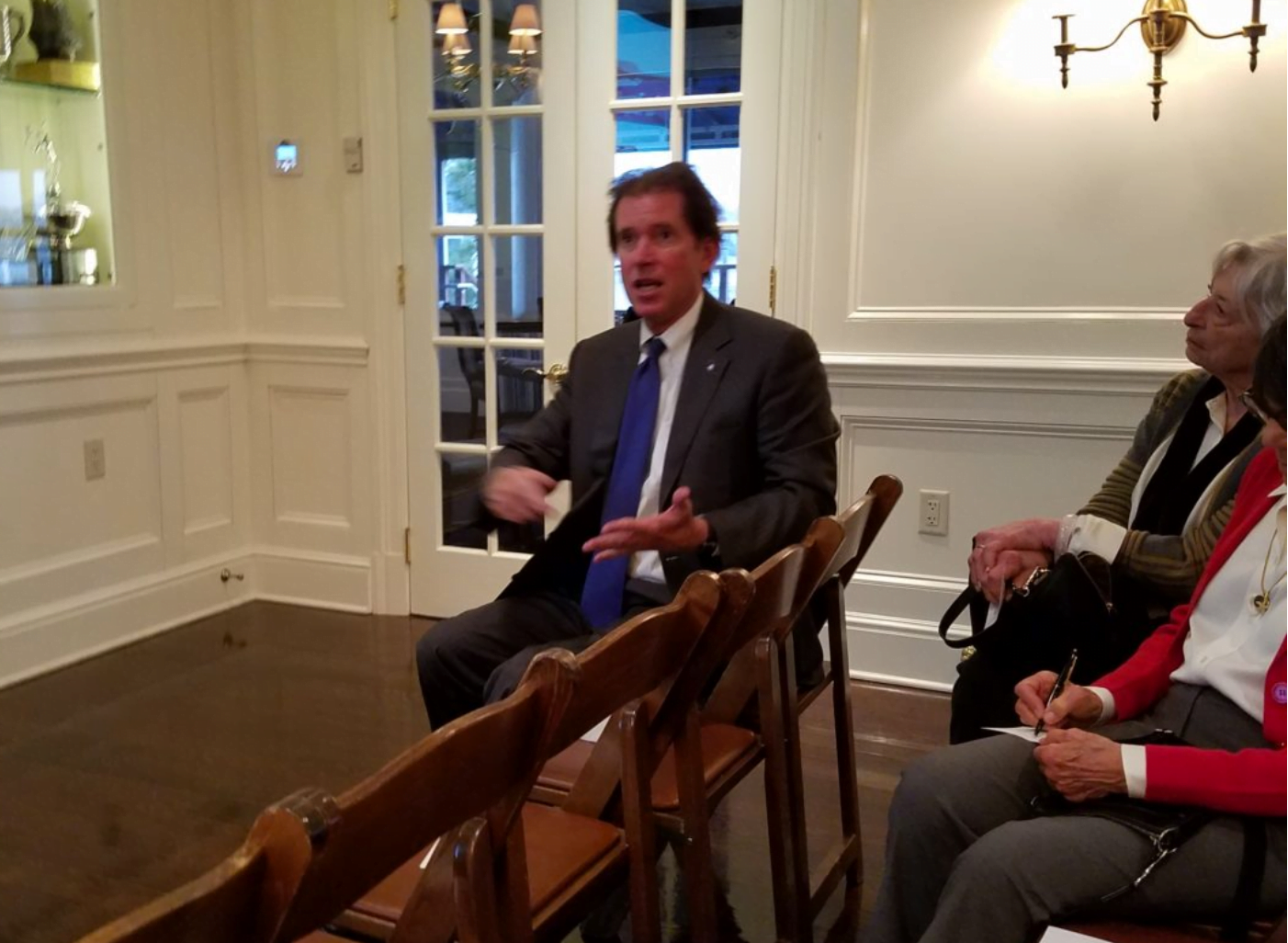 Scott Frantz was present at the event (Photo: Joshua Littman)

Mr. Cameron served on the CT Metro-North Rail Commuter Council for 19 years, and founded the Commuter Action Group in 2013, which is an organization which advocates for Metro-North commuters.

The situation that Cameron laid out in his presentation was, to be blunt, dire. 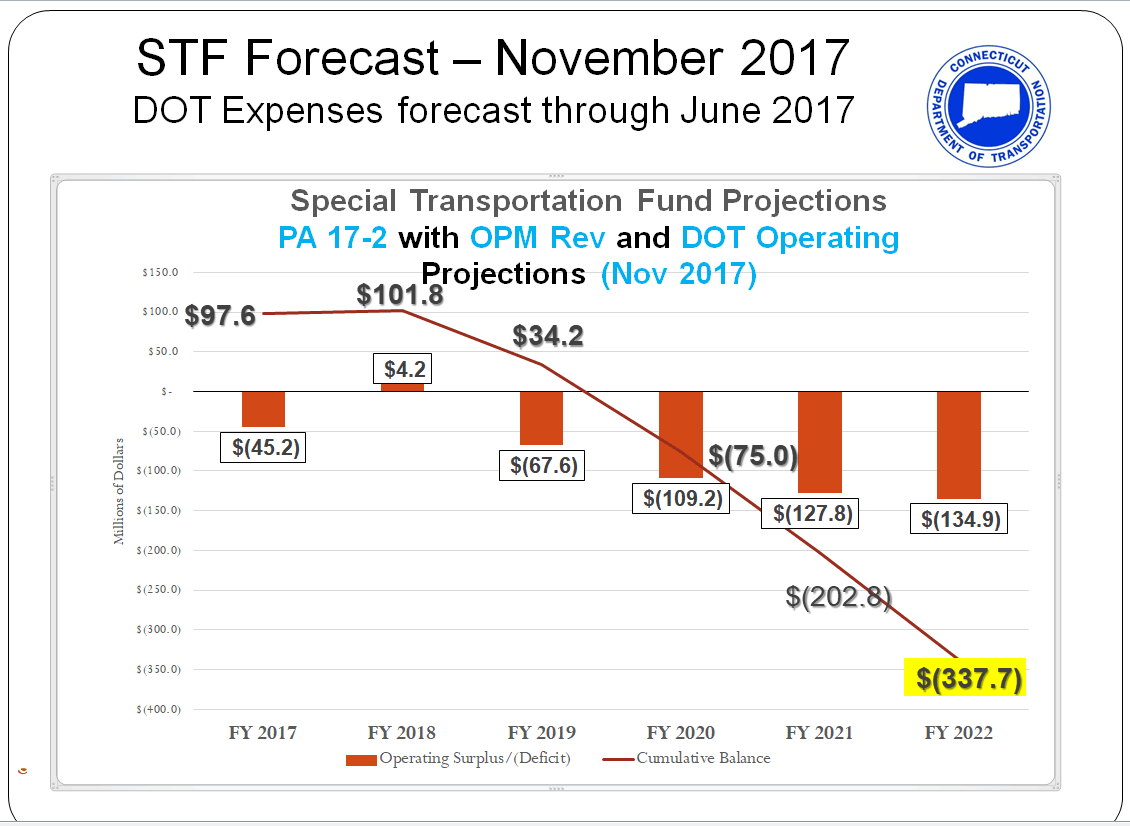 The Special Transportation Fund is running out of money (Credit: Jim Cameron)

Transit in Connecticut is funded by the government’s Special Transportation Fund. However, like everything else in the Connecticut government, it is running out of money. It is estimated that the STF will be in deficit by 2019, and being in the red by as much as $337.7 million by 2022.

Cameron said there are a multitude of reasons why the STF is in dire straits financially.

One is that gas tax revenues are down due to a combination of more fuel-efficient cars and more electric cars on the roads. Combined with the gas tax remaining static after being cut by 14 cents in 1997, this has led to a lot of lost revenue.

Cameron also claims that the STF has been used as a “piggy bank” by the state government to plug holes in the state’s budget.

He said $400 million has been taken from the STF funds over the past decade, in addition to $3.4 billion in lost revenue from the cuts of ’97. There will be a referendum on installing a “lock box” on STF voting in November (which would prevent its money from being used on anything besides what it’s supposed to).

If the Special Transportation Fund is in the red, this presents yet another headache for Hartford as the state is unable to get more bonding from Wall Street, for transportation or otherwise. Not only that, but $4.3 billion worth of projects to improve and repair our infrastructure would be frozen. However, the Department of Transportation can only raise money for the STF in two ways: increasing revenues (such as via hiking fares), or cutting spending and services. Anything else must come from the legislature.

If the DOT is forced to cut spending, it will adversely affect the state in a number of ways.

One of the cuts on the line is the branch lines for Metro-North, such as to New Canaan and Danbury. Were these services to be cut, and to only operate in the AM/PM rush hours, it would be detrimental for these communities, leading to more traffic on the Merritt Parkway and I-95, and less mobility for those without cars (which often includes some of the most essential workers, like shopworkers, house cleaners, and restaurant staff).

Not only that, but as land without access to consistent Metro-North service is less desirable for developers, this would cause property values to go down, which, in turn, would lead to taxes in these communities going up.

So, there are many problems. Are there any solutions?

Cameron stated that while none of the solutions to the state’s transportation crisis will be popular, it would be far preferable to increase revenues than to solely rely on cutting spending to the degree needed to avoid a deficit.

This includes solutions such as restoring the gas tax to pre-1997 levels (which could be phased in at 2 cents per year for seven years, rather than all at once), as well as a tax on vehicle miles traveled (an idea which state legislators said was dead on arrival).

Tolls on CT Highways
One such solution that he voiced his support for is one that has been a rather contentious issue as of late: the reintroduction of tolls on the highways.

Connecticut has been without highway tolls since 1983, and much debate has been made over the possibility of reintroducing them in order to help fix the state’s transportation funding crisis.

Critics argue that tolls are another burden on Connecticut taxpayers, and worry that the revenue raised from the tolls will be miss-spent.

Cameron emphatically argued against a variety of tolling myths. For example, the idea that the federal government would not allow us to implement them (false), or that we should only toll out of state vehicles (which is unconstitutional).

Perhaps the greatest myth about tolling would be the idea that tolls are yet another tax.

As Cameron emphatically argued, tolls are not taxes. They are user fees. People only pay the tolls if they drive on the highways, just like how people only pay rail fares if you ride the train.

Plus, as Cameron joked, aren’t we kind of paying tolls already? 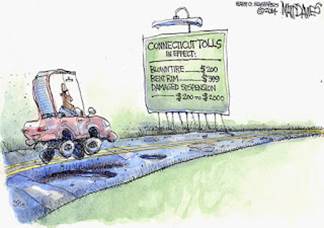