Memorial Day is a day to remember the veterans of all wars, especially those who gave the ultimate sacrifice in defense of the nation.

This weekend we honor every American who has fallen in every war. Yet this year, I reflect upon the first war: The American Revolution. Without it, there would be no nation to live in, or defend. When people think of the American Revolution, they think of the Boston Massacre, the dumping of tea into Boston Harbor, the Battle of Lexington and Concord or the Battle of Bunker Hill.

Moving out of Massachusetts, and into New York and New Jersey, they think of the disastrous Battle of Long Island and Harlem Heights in 1776, or the Crossing of the Delaware, Battle of Princeton, etc., until the final surrender of the British at the Siege of Yorktown, Virginia in 1781. 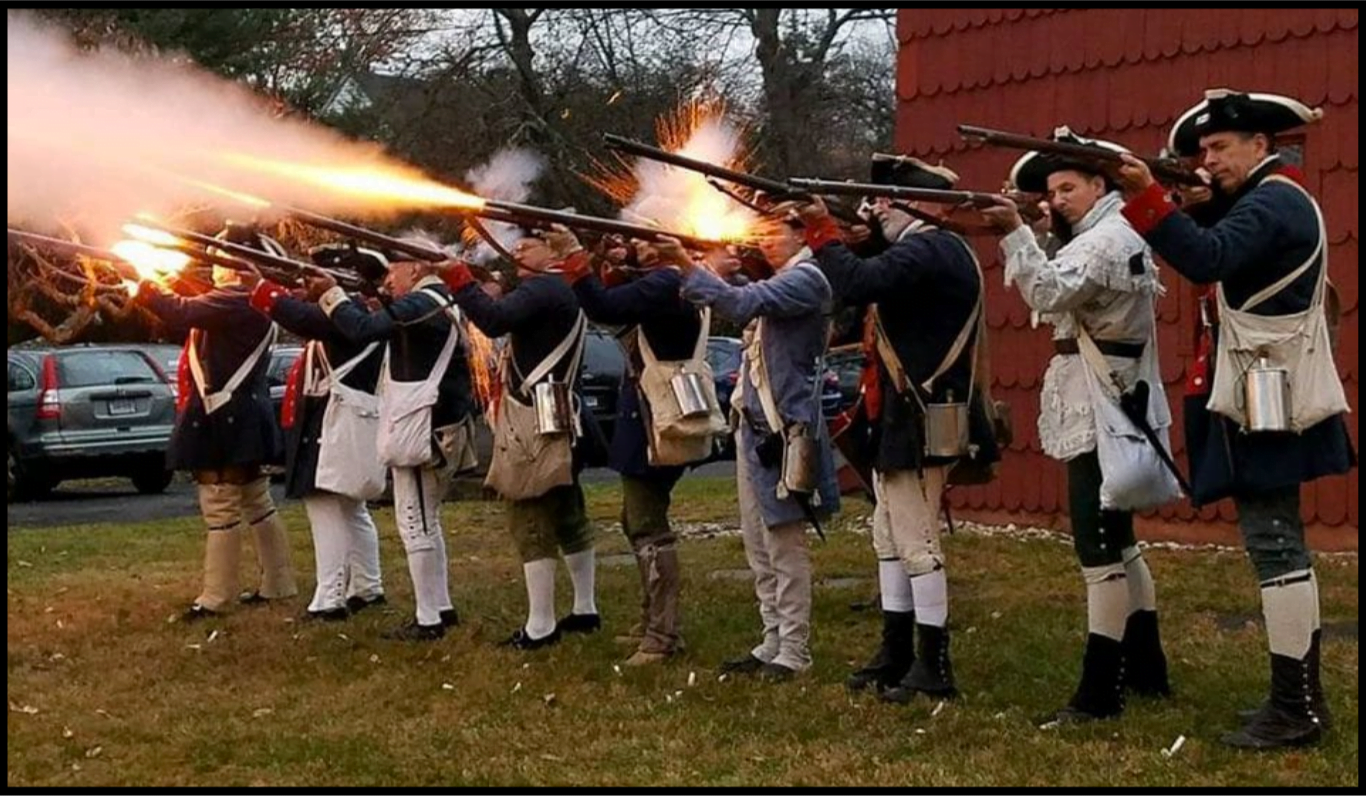 Yet the American Revolution was fought everywhere and by everyone. It was not just a war of distant battles, it entered the front yard and front door of every family and home in America. The British had good cause to be concerned with the nearby farming community of Greenwich. As seen from town reimbursements form 1777-1780, there was much activity within Greenwich to procure bullets, muskets, cannon and provisions for soldiers and the town defense. On February 3, 1777, a bill of £1 12s with £5 interest, was paid to Peter Mead, Esq. for covering the cost of bullets and muskets that he had loaned to the town for 21 months. The same month, in anticipation of using these guns and having them ready, the town paid Jonathan Reynolds £31 3s for making 344 dozen (4,128) musket cartridges and casting musket balls. The number of guns and ammunition must not have been enough because on March 16, 1778, a bill was paid to Captain Abraham Mead for the balance due to him plus £15 York money for the purchase of arms for the town. Two days later, a bill was paid of £1 to Richard Mead for carting in lead. The following month on April 17th , Jonathan Hubbard, Jr. was paid £1 15s 7p for making bullets. Here we see one man procuring the lead, another making bullets, all which were necessary to make sure the muskets loaned from Peter Mead could perform their duty. Powder must have been in low quantity because on May 4th , a bill of £7 1s was paid to Captain Sylvanus Mead for going to New Haven to procure powder and using his own horses and wagon to do it.

In June the town borrowed from Joseph Ferris £100 in cash for a “fitting use” and the record in the town books has it earmarked as “artillery expenses.” In November the town paid back Lieutenant Benjamin Mead, Jr. £1 13s 4p in cash which he loaned to the town for artillery. To move and place the cannon was a difficult task, and as a result the town reimbursed Jesse Hallock £1 7s for renting his horse for seven days to move the cannon into strategic defensive positions, such as will be seen at Chimney Corner.

Once in place they needed to be maintained and kept, which was the work of Gershom Lockwood III and Joshua Heusted who were reimbursed 7 shillings, and £1 15s respectively. The British must have been watching closely because what happened just a few months after Greenwich worked so diligently to prepare for its defense? General Tryon raided the town on February 26, 1779. Five months later the General made a second raid up the Gold Coast to stamp out all known patriot activity, but primarily to rid the country side just north of his base in New York City, of arms and ammunition. In his second raid, he burned Norwalk and Fairfield and then made it all the way to Ridgefield where he was met by patriot militia and regulars under the command of General Wooster (who was mortally wounded in that battle), and Benedict Arnold, then still loyal to the American cause. Stamford was never burned – and no one knows why (but there is a curious gravestone in Northfield Cemetery on Franklin Street and North Street that said it was because of Elizabeth Nichols, wife of John Scofield. The newer gravestone probably from the 1930’s, simply says, “She saved Stamford from being burned by the British – 1779”).

After General Tryon made his destructive 1779 raid into Greenwich which led to General Israel Putnam’s daring ride down the Great Hill to rally troops in Stamford, the people of Greenwich continued to fight British tyranny. As Spencer Percival Mead relates in his history book of the town, Captain Andrew Mead and Elnathan Close, with a large company of men, went aboard their whale-boats and sailed silently to Ferry Point, Long Island. It was there that they seized upon a small store vessel and brought the ship off with them back to Greenwich. They anchored her safe and sound at Chimney Corner within Indian Harbor. Whatever was aboard this small vessel was valuable enough for the British to pursue the Greenwich men with great haste. To the dismay of the British, the cannon which had been procured by the town and placed strategically overlooking the harbor were waiting for them. The cannon began firing upon the British vessel, after which, several men on the shore also began to fire their muskets at will. The first shot struck the vessel’s deck and wounded a dog (as it was assumed for they shortly thereafter heard a sudden yelping aboard that ship). After intense fire from the Greenwich men, the British gave up and sailed away back to Long Island. 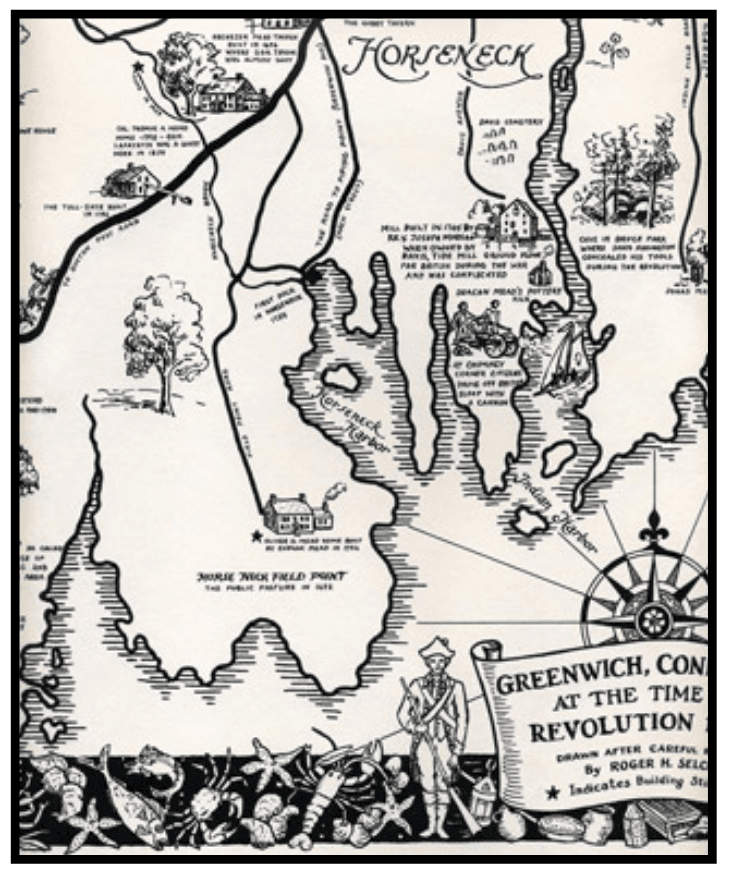 The Greenwich Historical map showing the skirmish at Chimney Corner

Spencer Percival Mead relates another story in his book, that a group of half a dozen Greenwich men resolved that the vehemently pro-British New York Newspaper, the Rivington Press, should be stopped. Captain Andrew Mead and Peter Mead led the expedition, and right underneath British eyes in the heavily guarded city of New York, destroyed the printing press and bagged the type. They threw the bags of type over the backs of their horses and made it safely back to Greenwich. It was here in town that the type was fully destroyed, save for a few pieces the veterans saved to spell each of their names and keep as a memento of their daring adventure.

The war was complex. Loyalties were constantly shifting and spies were everywhere; and because the British vastly outnumbered the American army, and were much more disciplined and well equipped, Americans soon had to turn to guerilla style warfare. They could not beat the British head on, so daily life often witnessed innumerable raids, plundering, pillaging and killing. It is difficult to fully measure and appreciate how much our forefathers endured and sacrifice to establish this nation. Besides the sacrifice of providing arms and men, those soldiers had families. With men on the battle field, farms were neglected and life became much harder in an already difficult agrarian world. Besides seeing reimbursements for weapons on the town records, there are also entries such as with Titus Mead who was paid £75 for supplying soldiers’ families with necessary supplies. There is another entry concerning my seventh-great Grandfather, Ezekiel Finch (buried in the Finch Family Cemetery on the Polo Grounds). He was reimbursed £89 12s for supplying the family of John Rundle. Rachel Finch, Ezekiel’s daughter, had married John Rundle some years before the Revolution, at Ezekiel’s House. John Rundle was part of a select group of highly trained men who fought at the Battle of Stony Point, under the command of Brigadier General “Mad Anthony” Wayne. It was a daring night assault. Fifteen were killed, including John Rundle, and 83 were wounded. His death left Rachel Finch Rundle a young widow with children.

The hardship and sacrifice of the countless mothers and young children at home is often forgotten in older history books, and it yet this hardship was everywhere across the nation. Often we think of the sacrifice of the soldiers, but that is onlypart of the story, the family also makes great sacrifices to their personal lives and happiness when soldiers are off fighting. So this weekend, while we enjoy our family, friends, good weather and good barbeque. Remember the foundation which Greenwich stands upon and which is cemented by the hardship, sacrifice and honor of our forefathers. This Memorial Day, remember all who have fallen in the defense of American freedom, and perhaps this year particularly remember the daring and courageous feats of courage and strength of the forefathers of the town of Greenwich who fought to create a new nation. Their legacy to us is something that can never be repaid. The least we can do is honor them, their lives and their memory.

We will never forget. 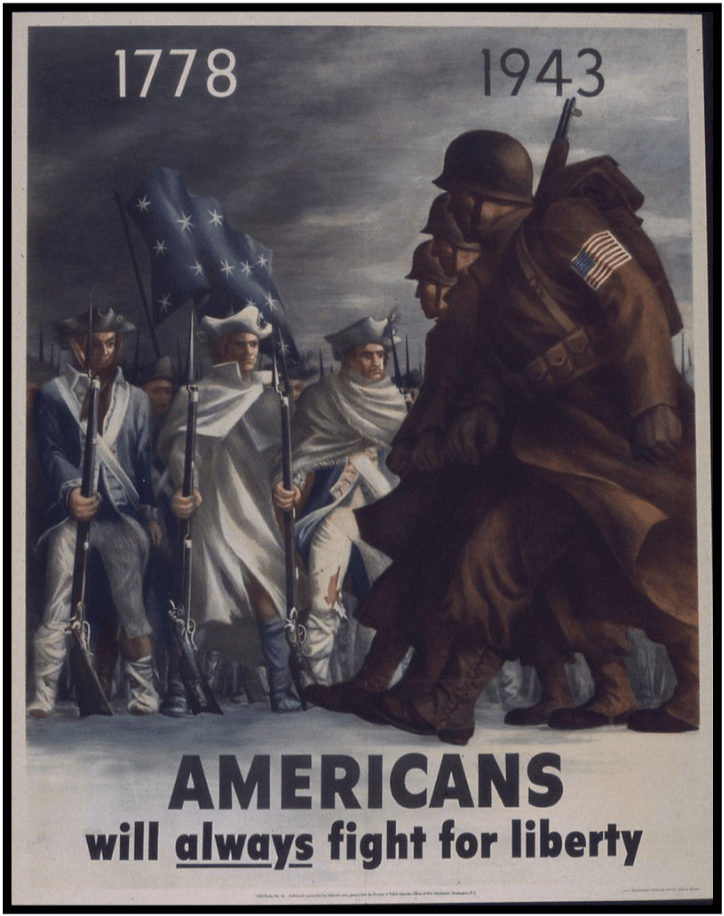