George Chmielowiec, 93, was 18 when he spied his future wife across the room at a house party in Harrison, NY.

One of the couple’s many milestones came in 1950 when they agreed to change their family name from Chmielowiec to Chelwick. 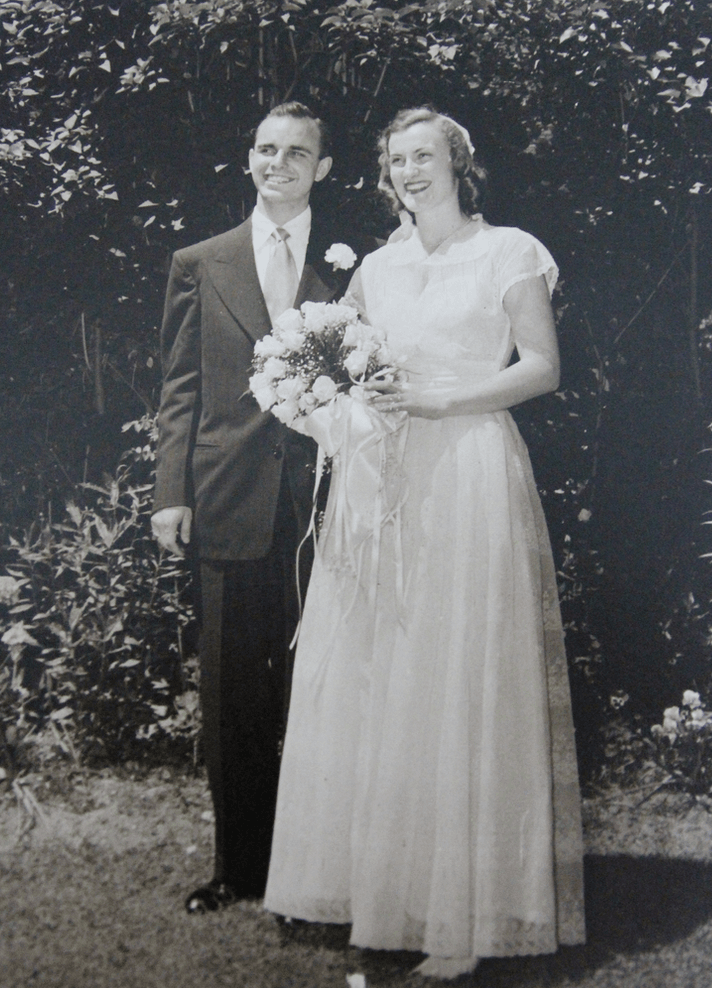 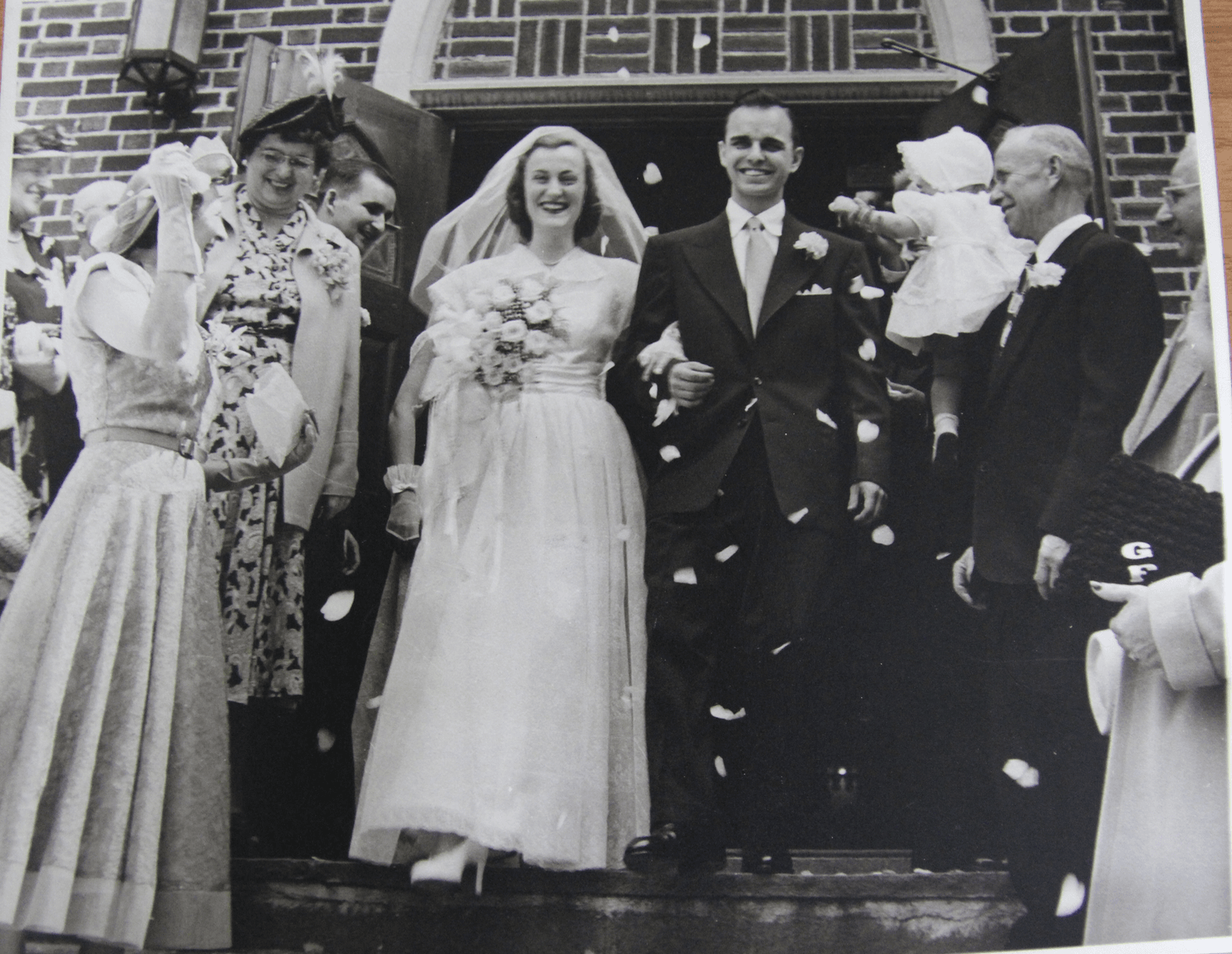 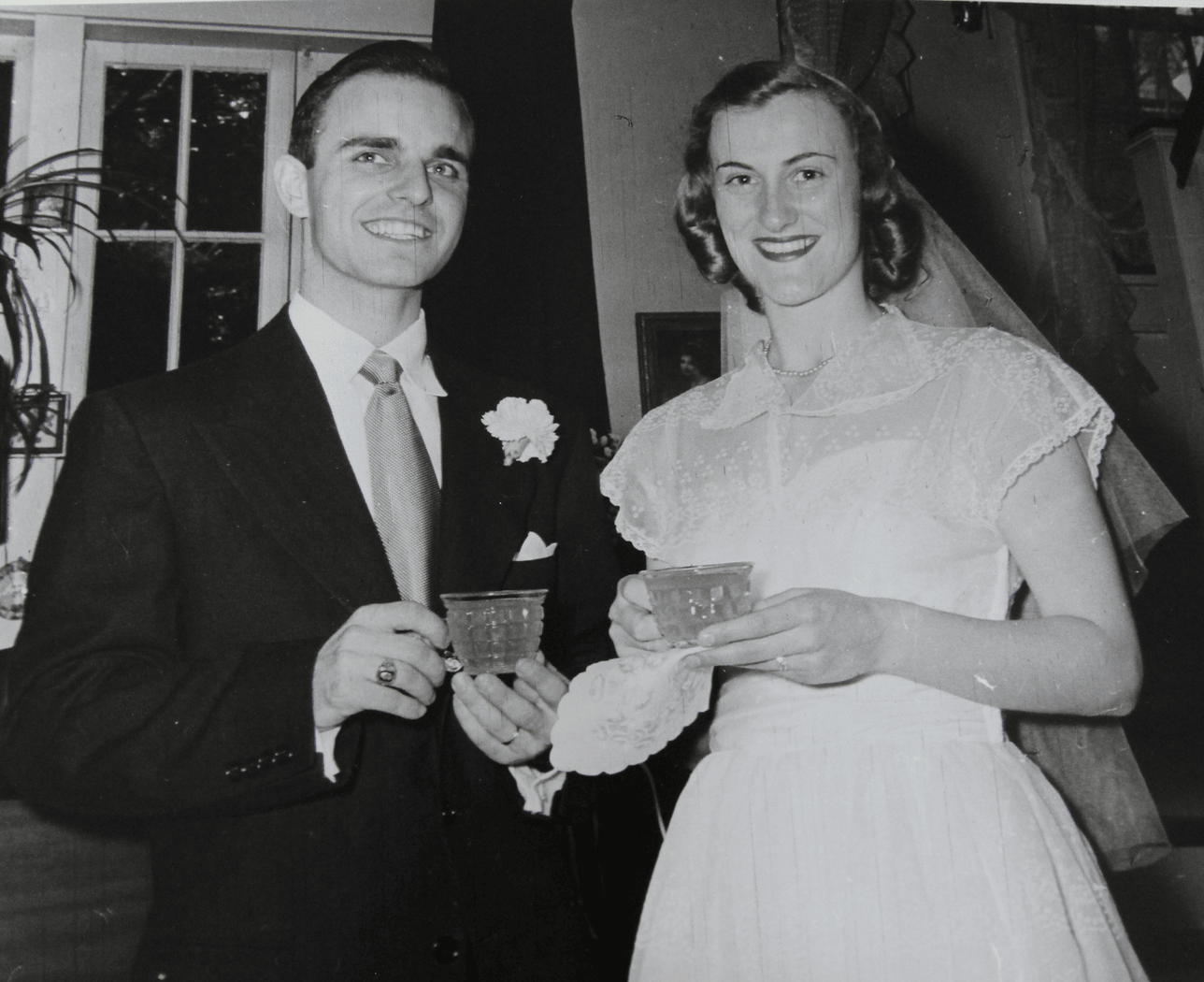 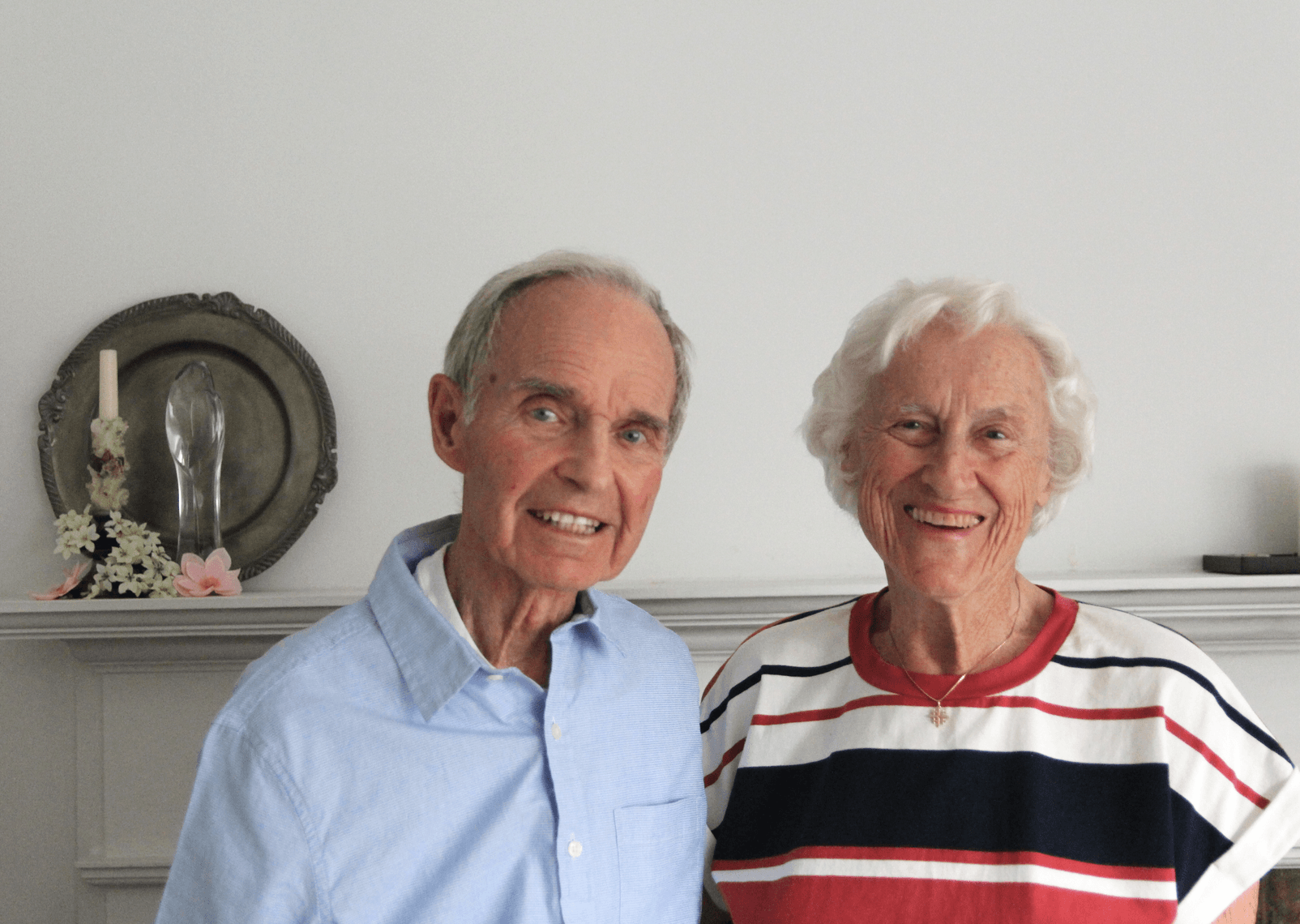 George Chmielowiec, 93, was 18 when he spied his future wife across the room at a house party in Harrison, NY.

One of the couple’s many milestones came in 1950 when they agreed to change their family name from Chmielowiec to Chelwick.

This month they celebrated their 70th wedding anniversary with a small gathering at the Milbrook Club where Nancy enjoys regular rounds of golf.

Nancy and George both recall the night they met.

“Back then you’d get together in group parties and George was at a lot of parties I went to,” Nancy said as she and George sat beside each other in the living room of their tidy central Greenwich home they purchased in 1966.

George’s family had moved from Byram to Rye and George was taking the train to from Harrison to Greenwich to finish at Greenwich High School.

“So his new friends in Rye came to a party that my friends in Harrison were having,” Nancy recalled. “That’s how we met. Because as I was walking down the stairs to the basement where the party was and he noticed me.”

“My family owned a house in Byram and we moved to Rye and so I became friendly with the young men in the neighborhood,” George recalled. “That night at the party I said, ‘That’s an interesting looking gal. I’ve got to get to know her.'”

Nancy recalled making just about the same remark to her friends. “Neither of us knew that both of us said the same thing,” she said.

“She was the girl with the most beautiful hair,” George recalled.

“I had long hair below shoulder length,” Nancy said. “He was voted Class Brother. That’s because he was the good guy.”

George asked Nancy had their first date on Halloween.

“At that time there was a radio show ‘Haunted House,’ and they had the program from a house in Cos Cob. So he took me on a date there and we rode the bus from Harrison to Cos Cob,” Nancy said.

Then, when George turned 18, after graduating GHS, he was inducted into the Army Air Force.

“When George went into the service I was still in high school. I still went out on dates and to parties. I don’t know what he did in the service. That was his business. But we corresponded,” Nancy recalled.

“We thought the war was going to end soon, but it didn’t,” he said.

The 18-year-old boys in George’s class in the Army Air Force were told there wasn’t a need for pilots. Instead went through different tests to determine his placement and ended up being part of the Ground Control Approach, stationed in Manila in the Philippines.

Ground Control Approach, or GCA for short, was a service provided by air-traffic controllers where they guided aircraft to a safe landing, including in poor weather conditions, based on primary radar images.

“Instead of shooting down people and killing people, his job saved many of our young men who were coming back from POW camps,” Nancy said.

“The pilots only had their instruments to see, so we talked to them and they paid attention on how to descend. Especially when there was rain storms and fog. We talked them in,” George recalled.

While George was away, Nancy graduated from high school in Harrison.

“When he came back from the service I had graduated high school, and gone to college, and he went to work,” Nancy said.

Nancy attended Pennsylvania College for Women, which is now Chatham College in Pittsburgh.

She said by the time she returned from college she and George were a serious couple.

That said, the couple did wait for Nancy to turn 21. George was 23.

“You had to be 21 years old or have parent consent,” she said. “I turned 21 in May and we got married in June at Sacred Heart Church in Byram. Father Dillon officiated.”

“We were happy and giggled through the whole service,” Nancy recalled. For their honeymoon the couple went tent camping in Cape Cod.

When they were ready to start their family, the decision to change Chmielowiec to Chelwick made for easier pronunciation.

“When he worked at the bank, they put the long Polish name on the plate people had difficulty knowing what to call him,” Nancy said.

“I said when I get pregnant if you’re serious about changing the name let’s do it before the first baby is born. It’ll be easier for them,” Nancy recalled.

George said the name change didn’t bother his father. In fact the name had presented its challenges to the family starting when Mr. Chmielowiec Sr came through Ellis Island and a clerk misspelled it. It took a year and a half to straighten it out so it was legally Chmielowiec.

Besides, George said, many of his Chmielowiec relatives had already changed their names.

“Chelwick is basically taking half of the letters out of Chmielowiec,” Nancy said.

George and Nancy were both very involved in raising their three boys. Every year they took the boys tent camping to the spot by the beach in Dennisport on Cape Cod where they’d honeymooned.

Over the years the couple donated many hours volunteering in Greenwich. 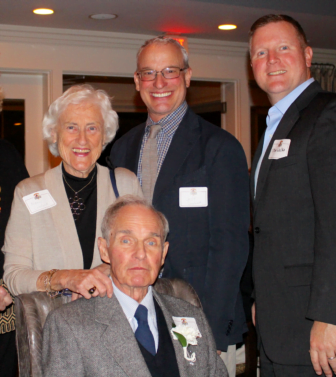 George volunteered with the Boy Scouts for over 50 years. He was also a member of the RMA and president of the Byram Rotary.

But what many know him best for is volunteering to film Greenwich High School football games, which he did from 1970-2012, filming a total of about 500 games from Boston to Florida.

In fact he was inducted into the GHS Sports Hall of Fame in 2016.

Nancy who taught first grade at Parkway School for several years and then was an active substitute teacher, has volunteered at Greenwich Hospital’s gift shop for over 30 years.

“We volunteer to keep out of mischief,” George joked. “I was born in Greenwich and want to give back. I was on the RTM for almost 35 years.”

George worked full time for Putnam Trust from 1946 to 1986, moving with them when they changed locations from Greenwich Avenue to Mason Street, and rising to become Senior Vice President in charge of the Mortgage and Loan Department.

“He started out in on the job training program and went to night school college at Pace and NYU through a veterans program,” Nancy said.

“I worked my way from the ground up,” George said. “They finally put me at the window serving customers in the savings department.”

George vividly recalled one incident at the bank. “A woman came up and scowled at me. She knit her brow and practically snarled at me. Then she ran over to the officer’s desk and pointed at me. Then, after she left the officer doubled over laughing. Apparently the woman had said, ‘How dare you have someone so young handling my accounts?’ I told the officer to ask her, ‘Where was she when they sent me overseas?'”

Another time George waited on a customer, a Polish man who was a professor. “I said thank you in Polish and he was very offended. He said, ‘That’s a peasant dialect!’ He was quite hoity-toity.”

Over the years, George and Nancy worked their way toward owning their home in central Greenwich.

They lived briefly in Harrison and then moved to veterans housing on Cross Lane in Cos Cob.

“They were individual houses – very small,” Nancy recalled. “We had two bedrooms, a living room, and a very small kitchen and bathroom with a stall shower and a kerosene heater.”

They bought their first house in Byram in 1960. It was a Cape at the corner of Sherman and Byram Rd, which is now a two-family house. “Our boys got to the point we needed more space,” Nancy explained.

The three boys all started at the Byram School. In 1966 when the Chelwicks moved to central Greenwich, near Greenwich High School, the oldest, George junior  was starting high school.

“We call him Chip,” Nancy said of George Junior.

“He’s a chip off the old block,” George said.

“When we moved here in 1966 Chip was starting high school at the old high school, which is not town hall. Tom started at Central and Jeff went to Julian Curtiss,” Nancy said.

George and Nancy, who are featured in a book called ‘I like Being Married’ by Michael Leach, agreed there is no secret to a successful marriage of as many years as theirs, but that it is important to be flexible during different phases.

“I don’t want to be smug – that we’re married 70 years. We’re just damn lucky. There’s no secret,” George said. “I’m far from knowing it all. Men make enough mistakes in this world, in this life.”

“It’s about compromising most of the time,” Nancy said of their long marriage. “Sometimes giving in to the other person.”

“You have to be flexible,” Nancy replied