Women Build, an affinity group of Habitat for Humanity of Coastal Fairfield County, held its third annual fun fundraiser, “She Nailed It” on Wednesday night at the Eastern Greenwich Civic Center.

The goal was raise funds for Women Build’s 15th home in Fairfield County. Most homes constructed to date have been located in Bridgeport.

While many prizes were offered, teams were really competing to win the coveted “bedazzled hammer” and the bragging rights it bestows. Last year’s winner, team Googley-Eyes defended their title and received their second golden hammers.

Stuart Adelberg, director of Habitat for Humanity of Southern New England, told the crowd he was “uncharacteristically speechless.” 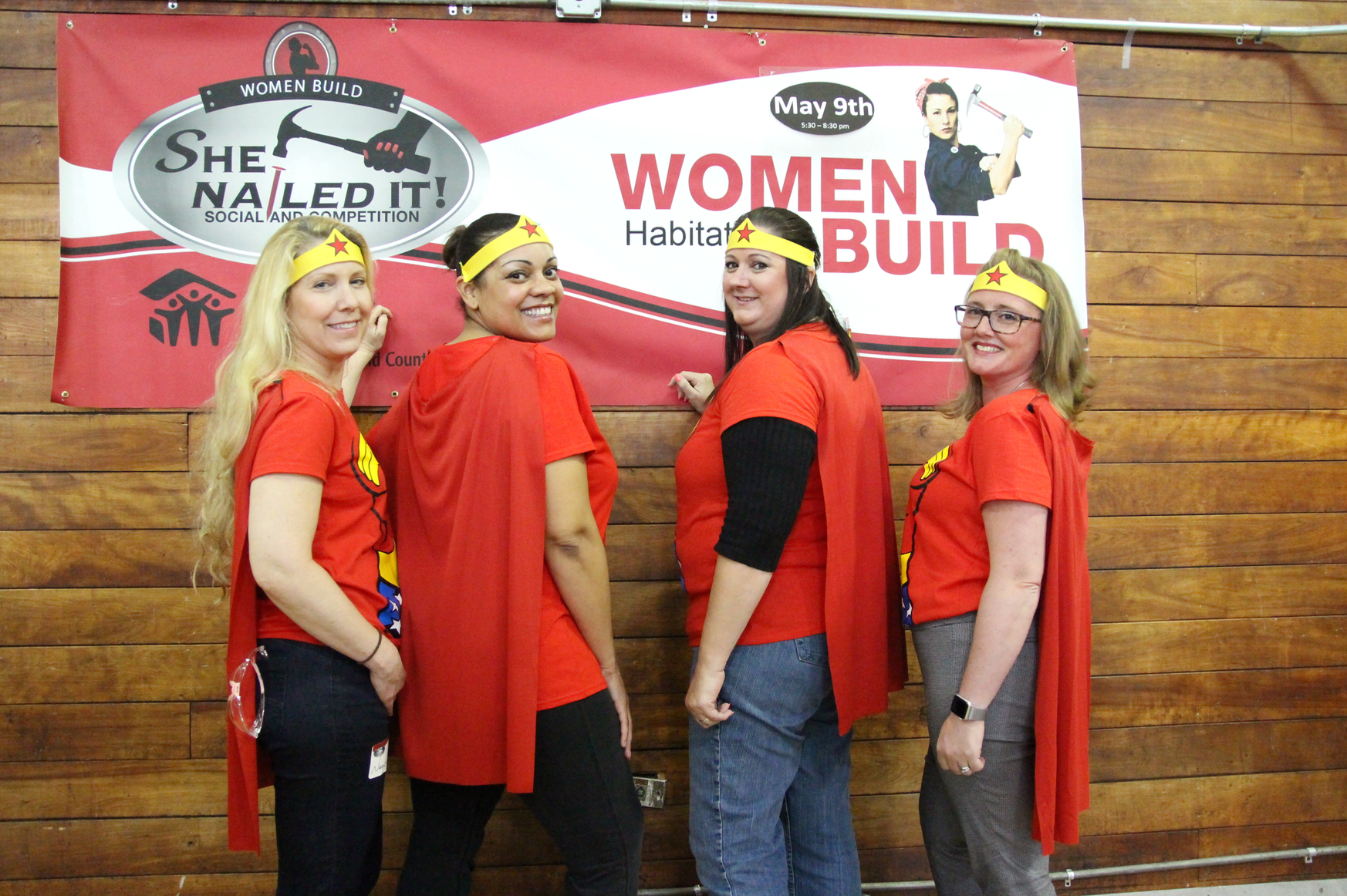 Nancy March, Ericka Lyons, Dee Ahern and Tricia Zawel, a team from UPS out of Waterbury at the She Nailed It fundraiser at Eastern Greenwich Civic Center. May 9, 2018 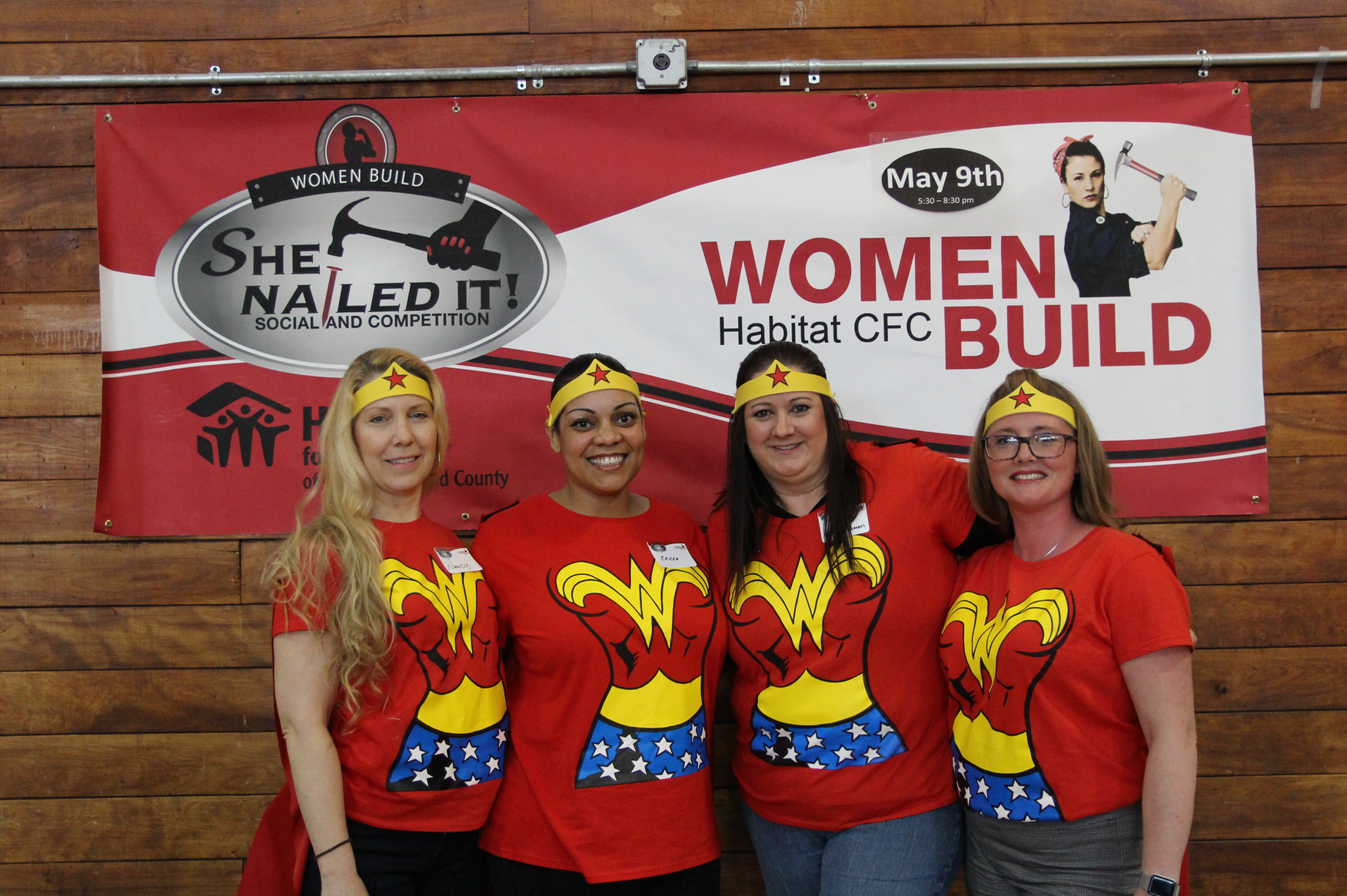 Nancy March, Ericka Lyons, Dee Ahern and Tricia Zawel, a team from UPS out of Waterbury at the She Nailed It fundraiser at Eastern Greenwich Civic Center. May 9, 2018

“Too many people lack a place to live,” he said. “Everyone deserves a safe, stable place to live. That is what we’re about.”

“Our mission is serious, but at this event people don’t take themselves too seriously,” Adelberg said with a nod to the all-women teams and their costumes. “The competition is tongue in cheek, as is the bravado.”

“Enthusiasm and hard work are all that is necessary to be a part of Women Build,” Adelberg continued, adding, “People respond to Habitat for Humanity, and who doesn’t want to help the good cause?”

Lorrie Stapleton, one of the organizers of the event said, “This is my baby. It’s so close to my heart.”

Stapleton said that in the event’s first two years, teams who were raising a lot of money weren’t necessarily winning the competition, so this year they broke out a separate competition for the top two fundraising teams, and called it the Habitat Hammering Angels.

The top two fundraising teams turned out to be the “Power of Four,” and “We don’t screw up, We just nail it.” 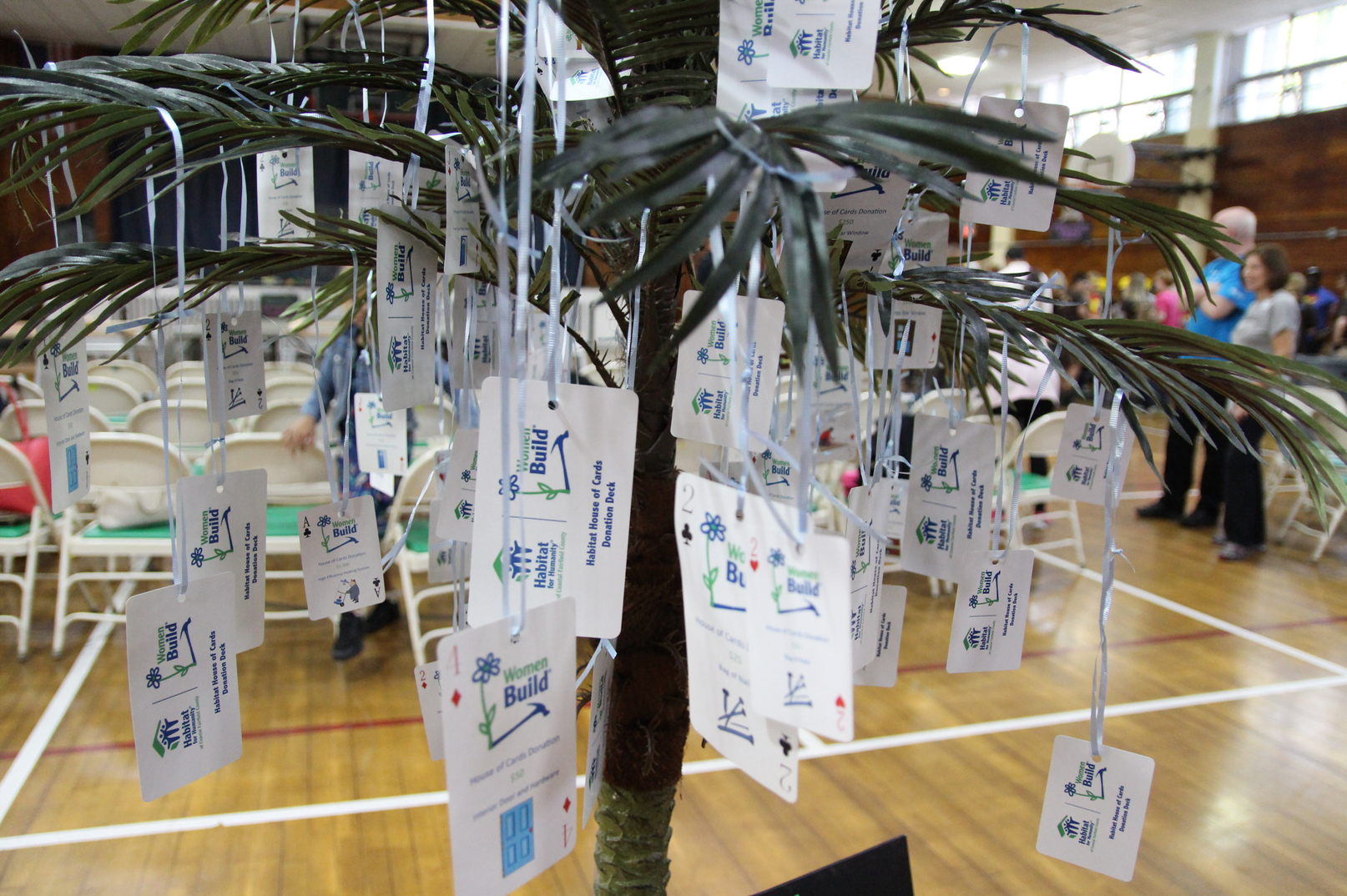 The giving tree was dedicated to the Gomez-Ortiz family who have special needs and found themselves without a safe, stable home. Mr. Gomez-Ortiz described the response of Habitat for Humanity as tremendous and described being treated like family. 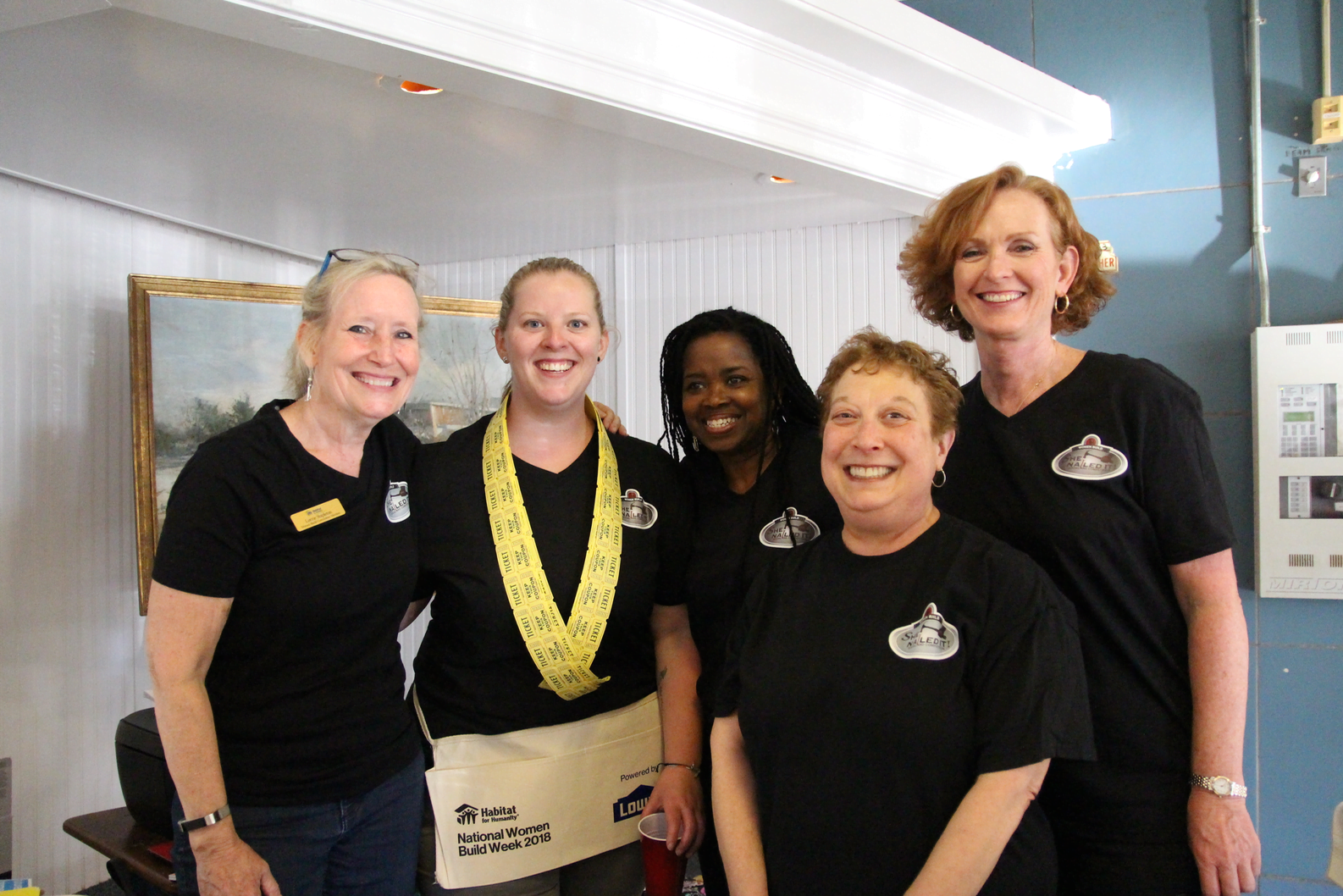 Lorrie Stapleton and volunteers at the She Nailed it fundraiser, May 9, 2018

Proceeds from a ‘giving tree’ prominently displayed at the entrance went to help fund building a house for the Gomez-Ortiz family of Bridgeport, who shared their gratitude to Habitat for Humanity for treating them like family.

José Gomez-Ortiz said that being selected by Habitat for Humanity was like a dream come true.

He said that as soon as he reached out to Habitat for Humanity, they responded.

Mr. Gomez-Ortiz, who has Type 2 Diabetes, said he’d lost a leg and seven fingers and had been praying for help.

Families selected by Habitat for Humanity are required to give back 500 hours of sweat equity. In return they get a home and a 0 percent interest mortgage.

Dozens of teams participated in Wednesday night’s competition rooted on their teams who competed to see who could hammer the most nails into a piece of wood in two minutes.  Some companies, such as UPS and Synchrony, had multiple teams competing, including Wonder Women from Waterbury, who were excited to participate after having heard how awesome the event was from UPS teams last year.

Melinda Pecora, from Greenwich was joined by  Deirdre Hopkins, Victoria Cappiali, and Kathy Bennett, said, “I love Habitat for Humanity and what they do for the communities they service.”

Shelly Cryer, in a team of mothers of her sixth grade daughter’s friends, the Hammerheads, said, “It’s fun to see the girls watching their moms come together for a cause they care about.”

The members of the Googly Eyes, the returning winner from last year, said they had met while volunteering at Habitat for Humanity and decided to compete as a team this in the “She Nailed It” fundraiser. 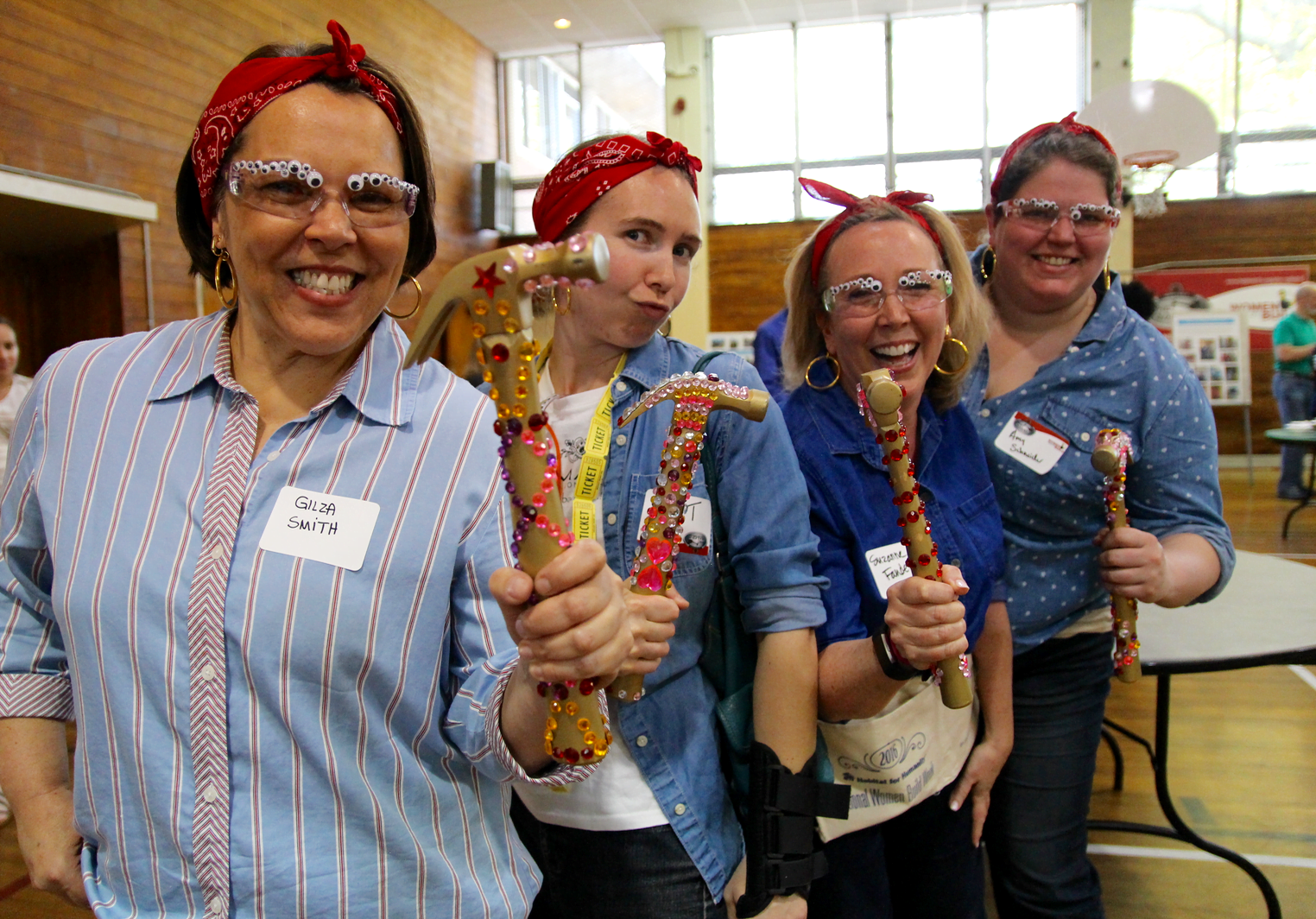 2017 She Nailed It Champions Team Googley-Eyes were back to try again in 2018. Left to right: Gilza Smith, Cat Edwards, Suzanne Fendel and Amy Schneider.

This year’s fundraiser was co-sponsored by Greenwich Parks and Recreation Dept and Garden Catering.

The program turns blighted properties into quality homes and transforms struggling families into tax-paying homeowners and valued members of our shared community.

Women Build empowers women to make a difference by learning new skills and using them to build homes for those in need. 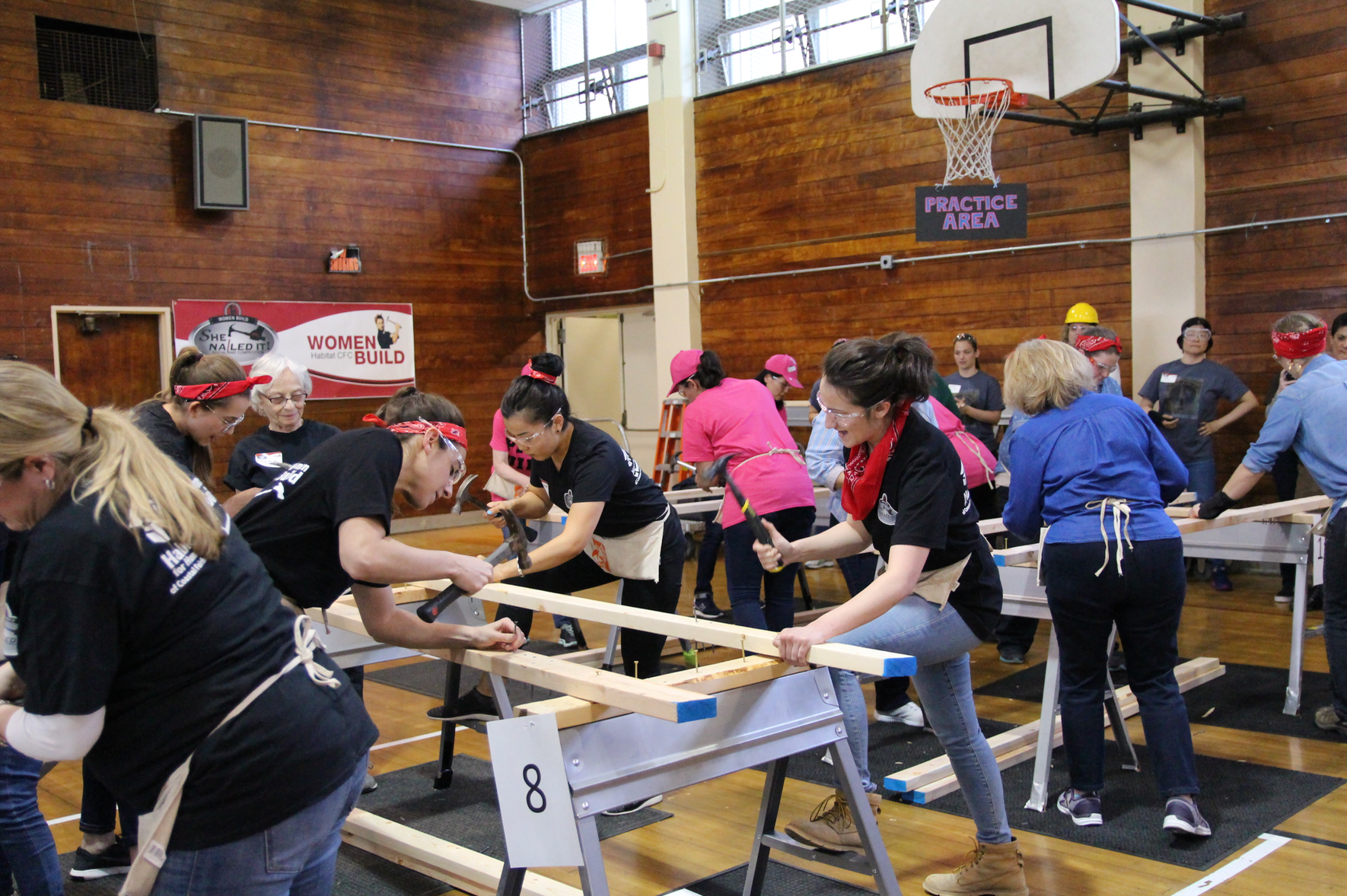 The sound of the hammering was almost deafening on May 9, 2018 at Eastern Greenwich Civic Center. Photo: Leslie Yager 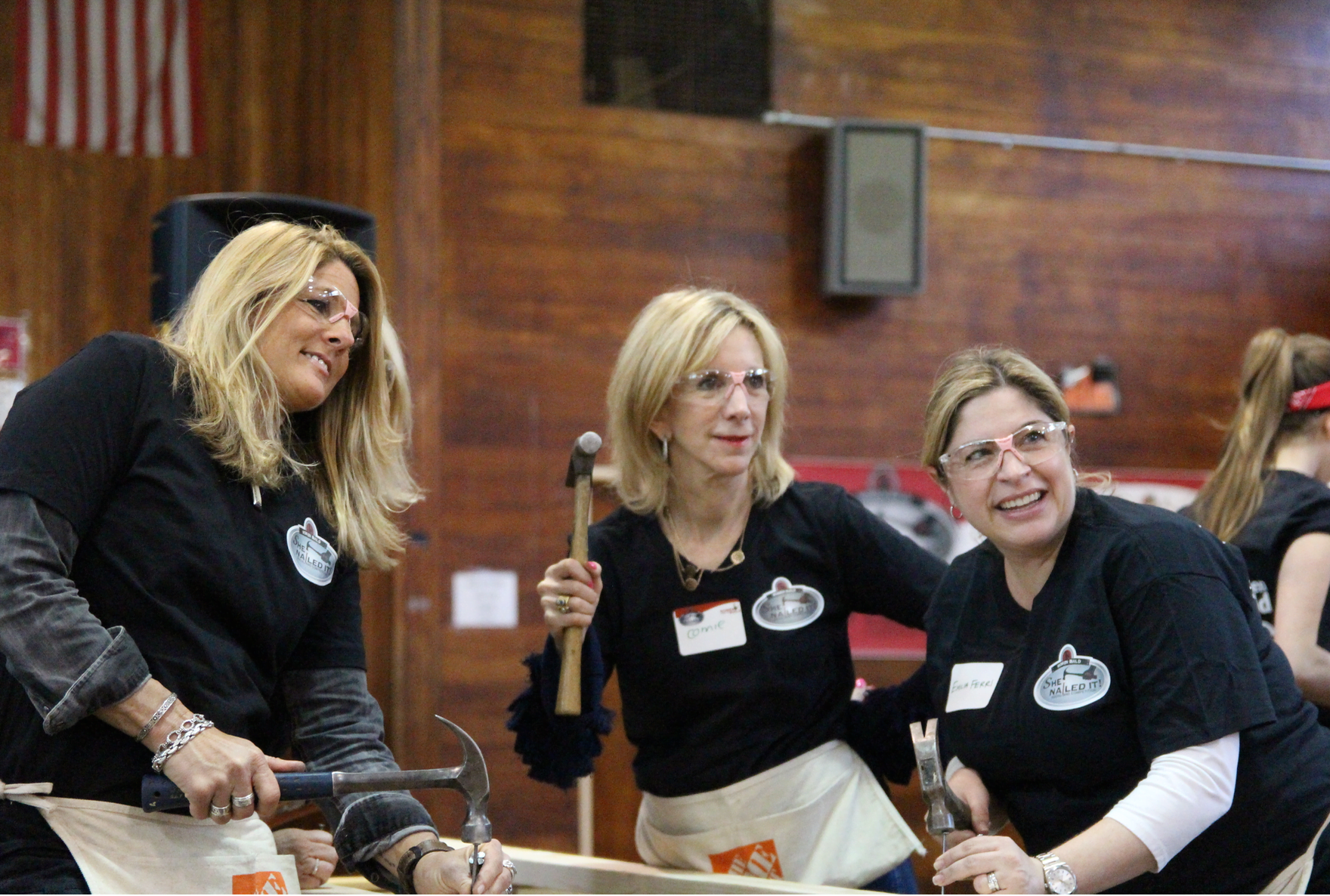 Teams also received credit for their applause and fanfare. May 9, 2018 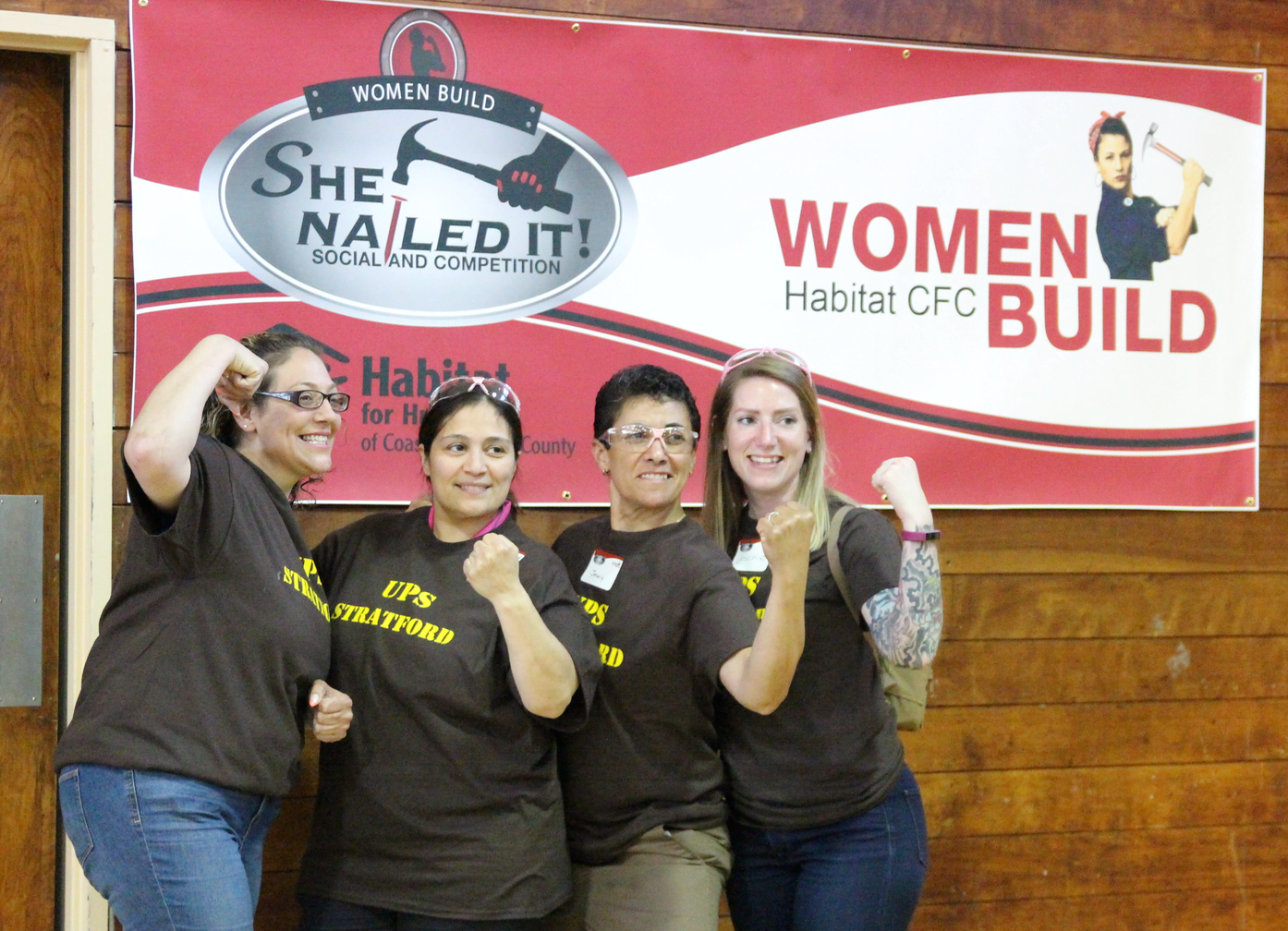 One of several teams from UPS at She Nailed It competition, May 9, 2018 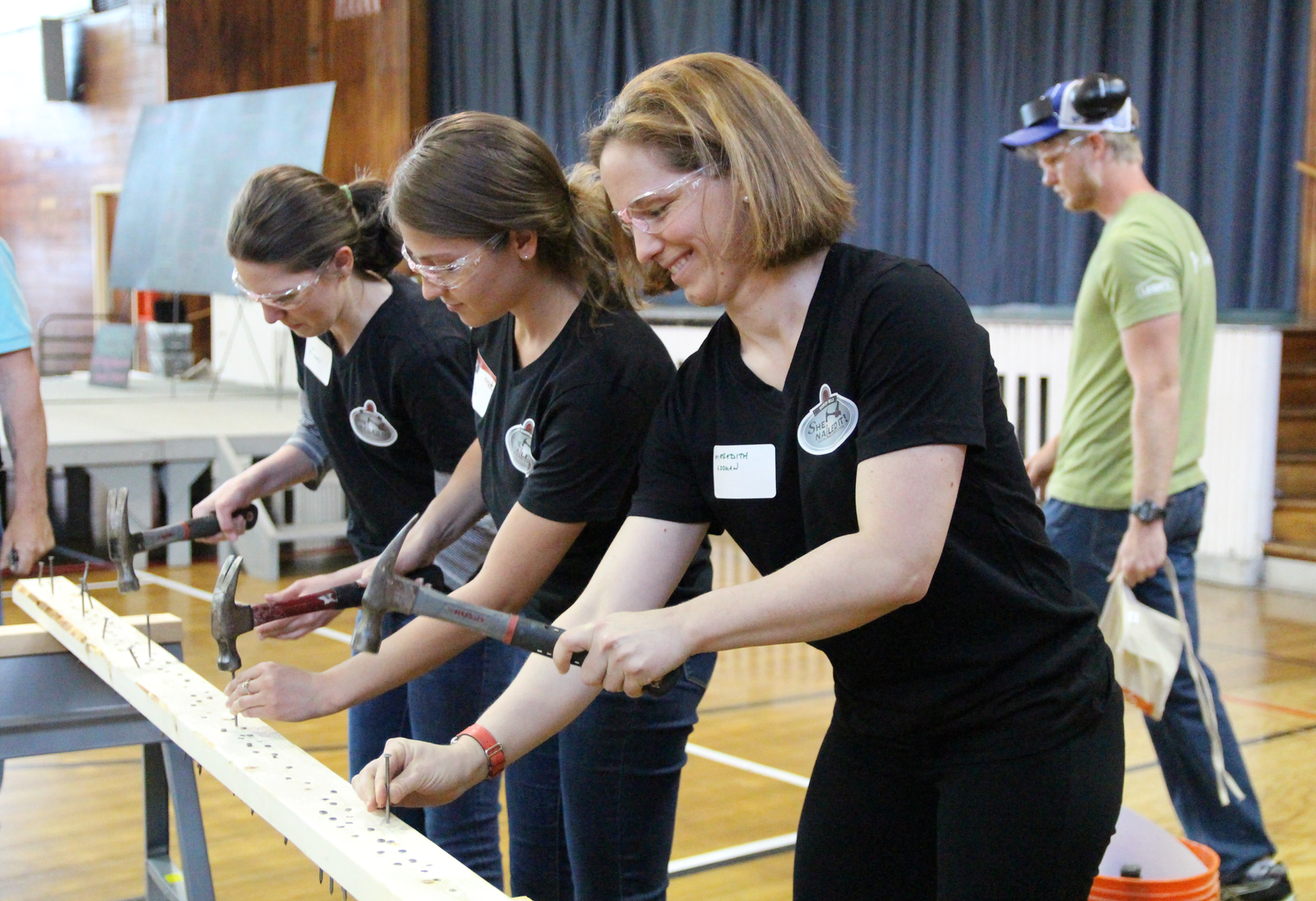 Teams had an opportunity for a little practice before the She Nailed It fundraiser on May 9, 2018 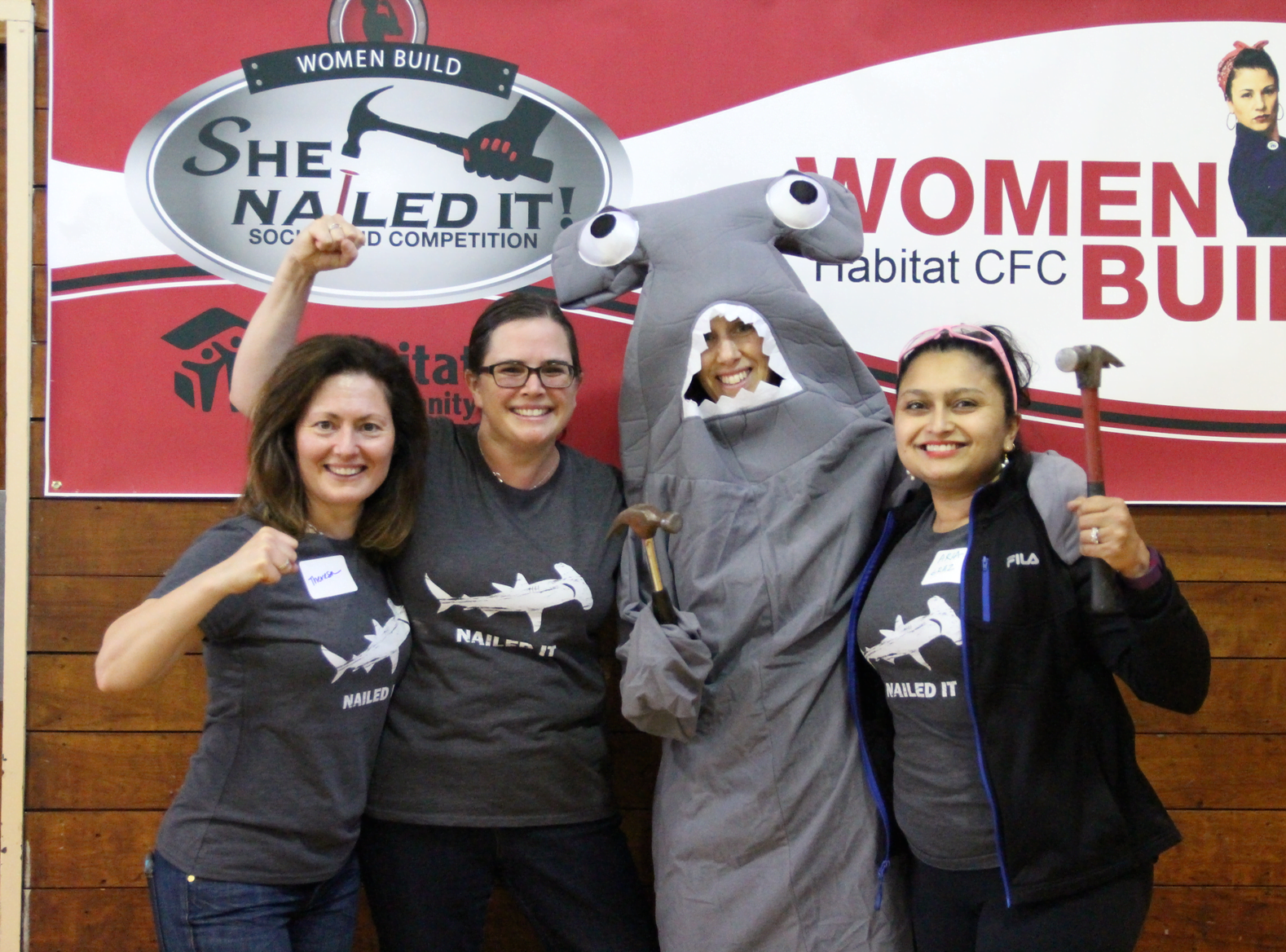 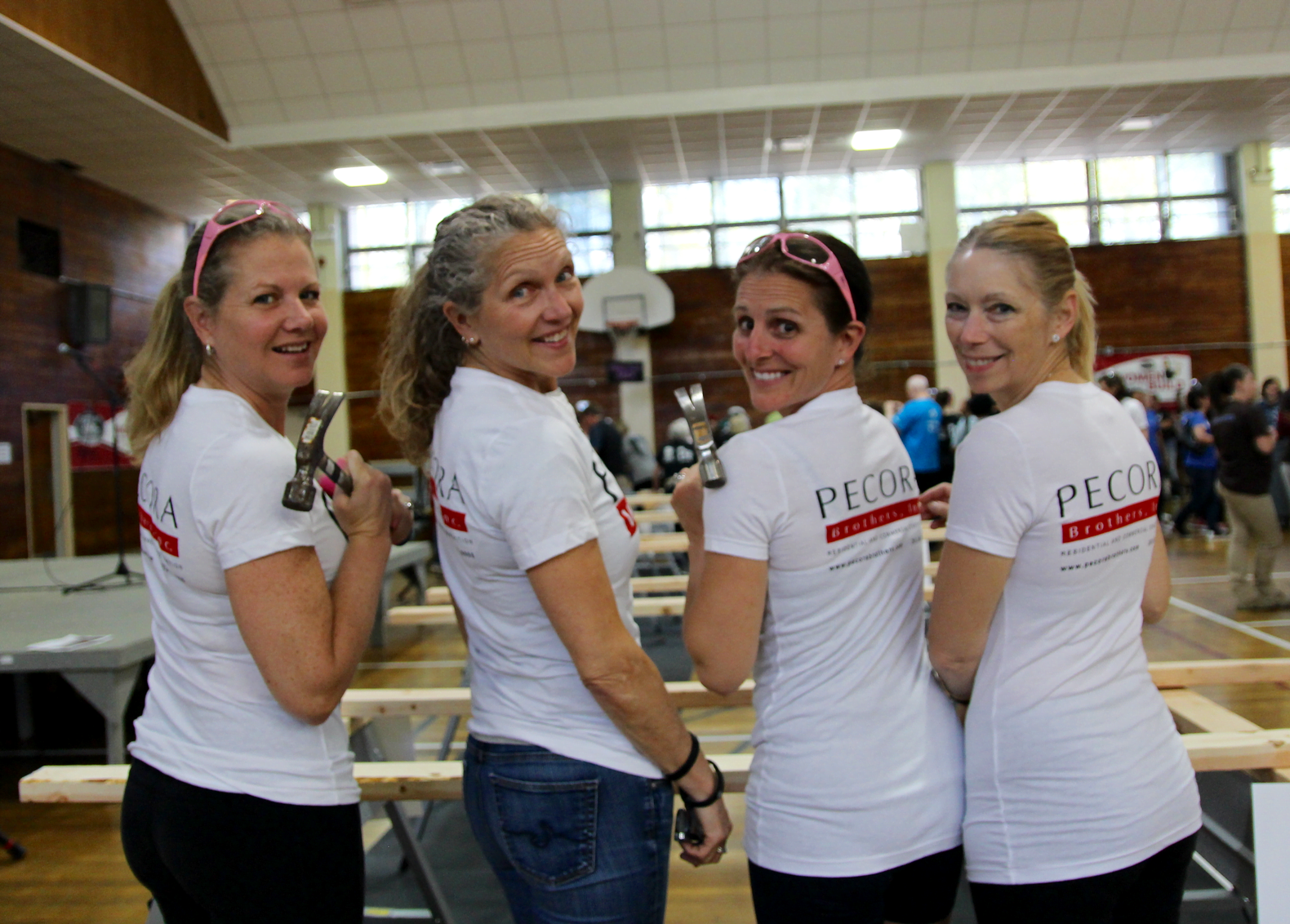 Team Pecora. Left to right: Melinda Pecora, Deirdre Hopkins, Victoria Cappiali, and Kathy Bennett at the She Nailed It fundraiser at Eastern Greenwich Civic Center. May 9, 2018. 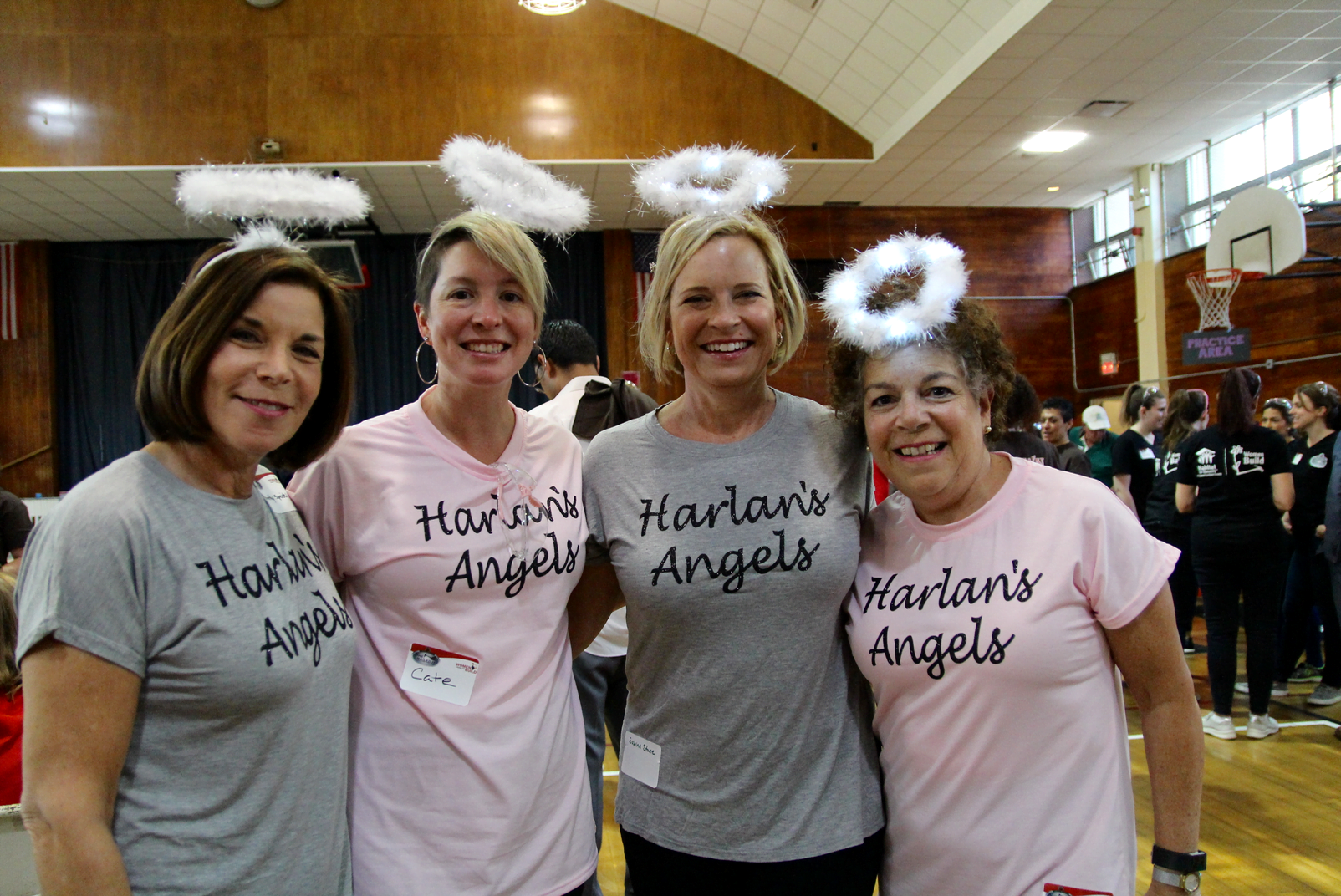 Harlan’s Angels from Halstead New England, a building materials business in Norwalk said their boss is a huge supporter of Habitat for Humanity and that they participated in a Women Build event in February. 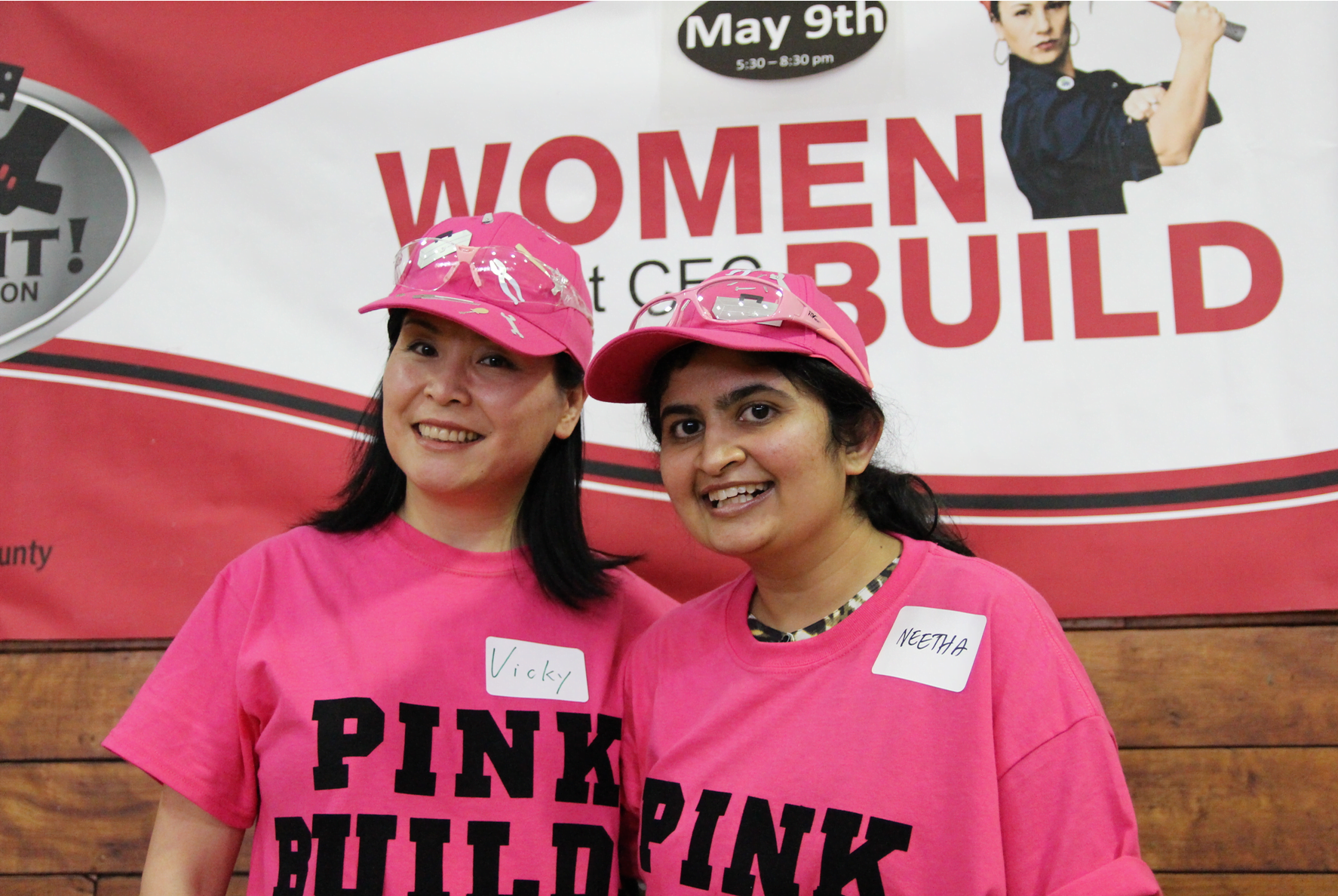 Vicky and Neetha from Synchron, a financial services company, said they were named “Pink Builds” because women can build too. “Having more women in the trades is good too,” Neetha said. 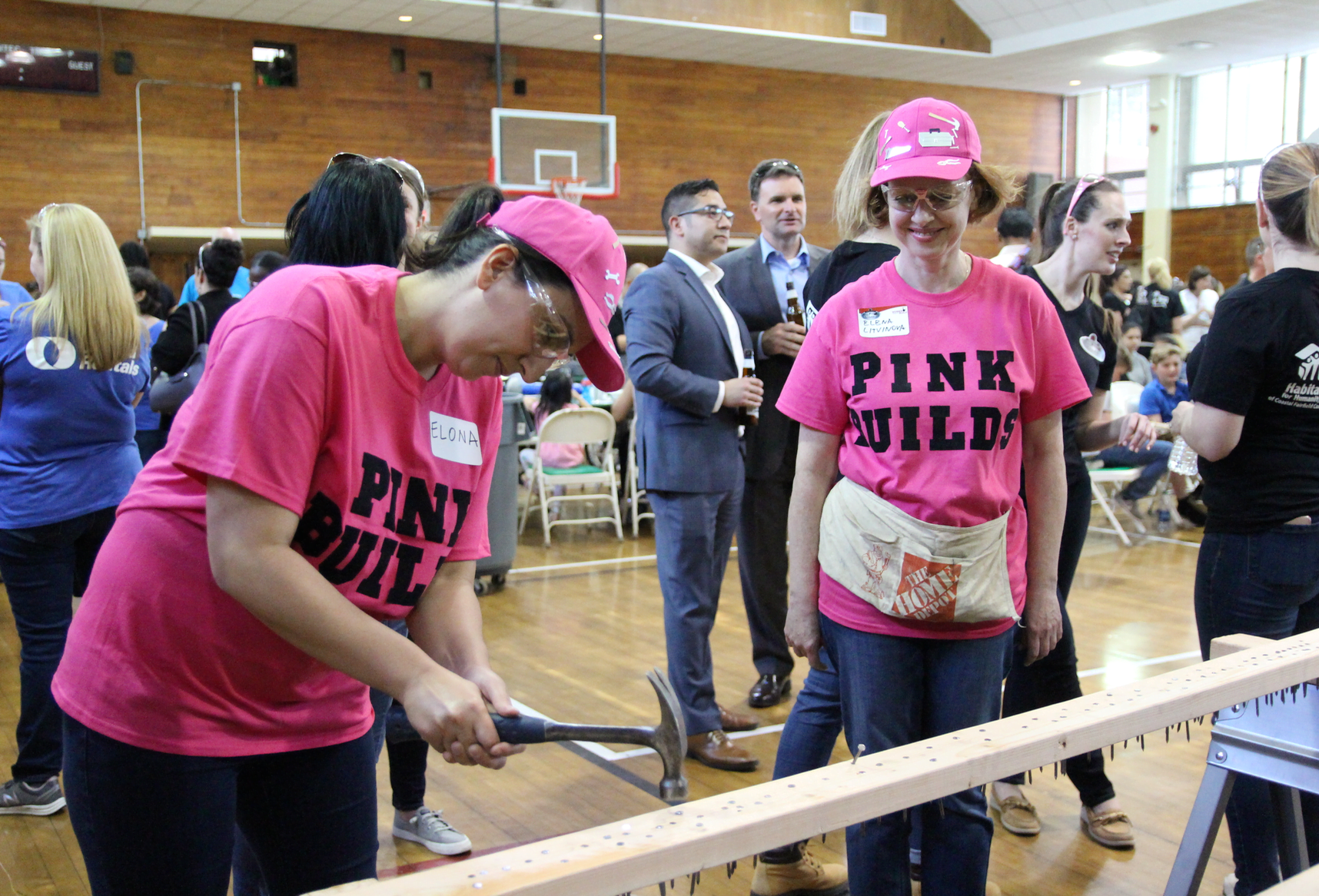 Members of Pink Builds had a bit of practice time before the She Nailed It fundraiser on May 9, 2018 at Eastern Greenwich Civic Center. 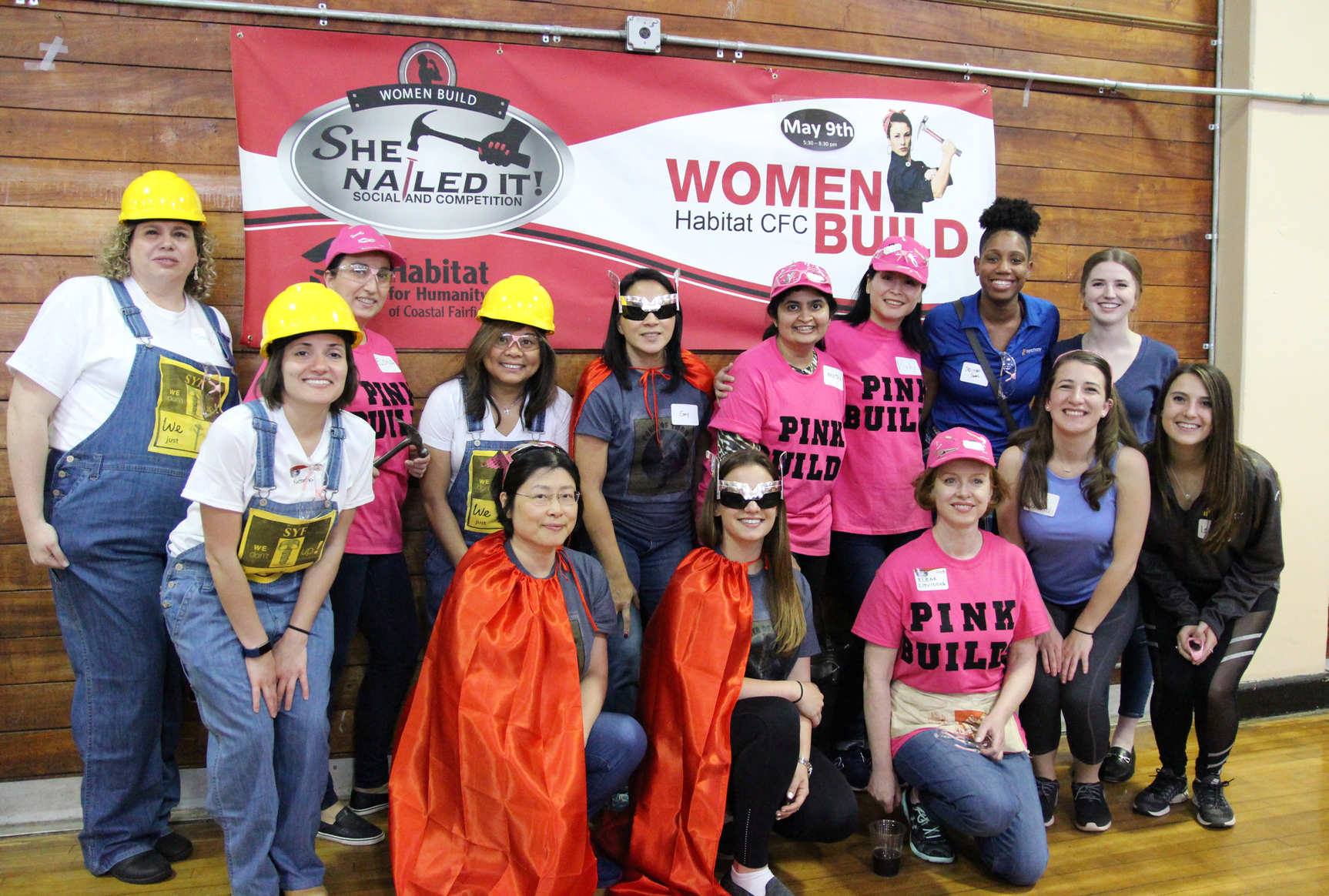 Synchrony sent several teams to compete in the third annual She Nailed It fundraiser at Eastern Greenwich Civic Center. May 9, 2018 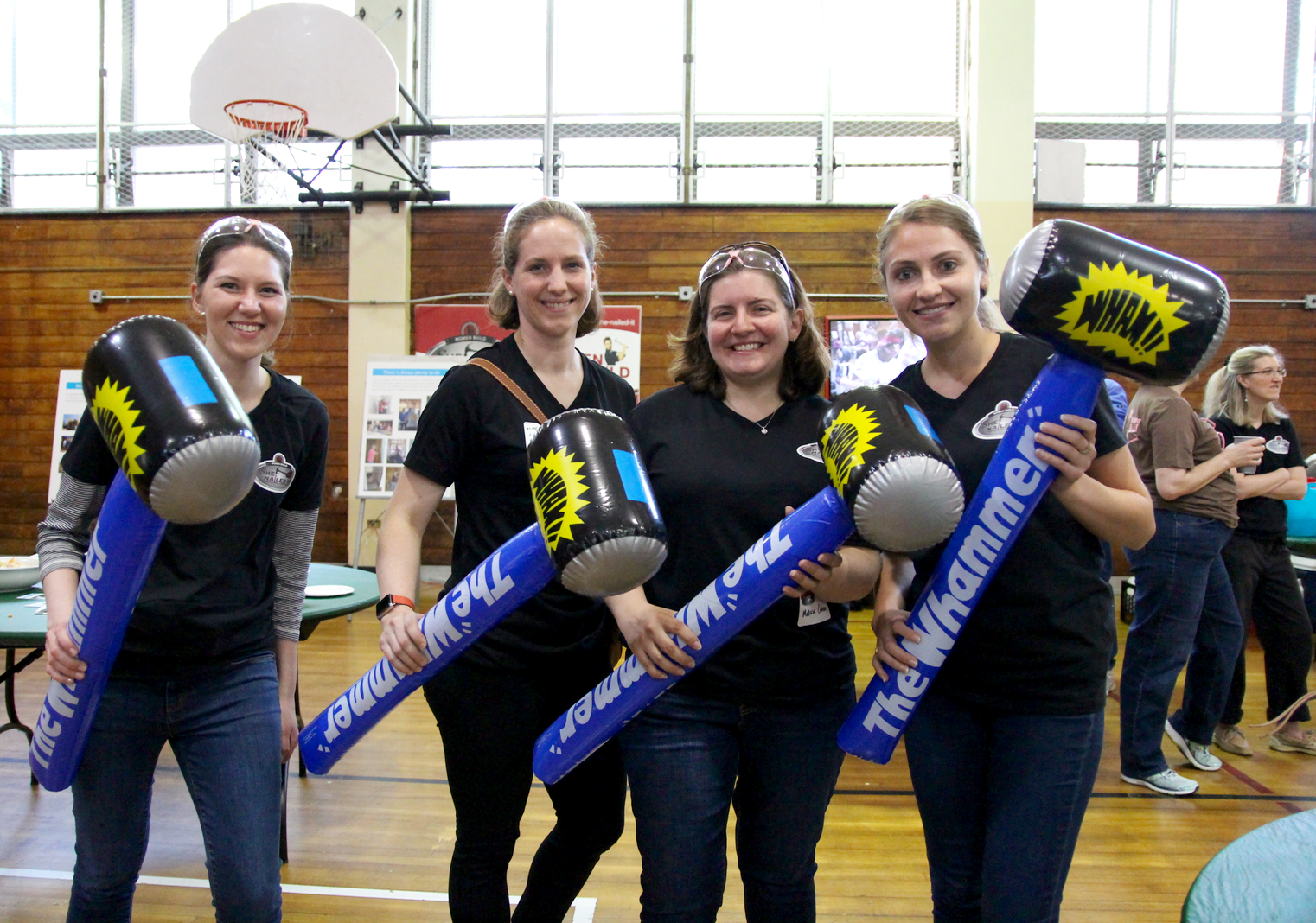 A team representing General Electric out of Norwalk were eager to compete at the third annual She Nailed It fundraiser. May 9, 2018