Author and history teacher Michael Belanger believes that the personal is the universal. Whether he is using stories of past Greenwich residents to teach about the Great Depression or  carefully editing a student’s short story, it’s clear that he pays attention to the details.

This belief extends to his writing. In his novel The History of Jane Doe, the story of three teenagers in a rural Connecticut town explores universal themes of love, loss, and friendship. The book jumps back and forth in time as history buff Raymond Green intertwines the strange past of his town with the history of his relationship with a girl, Jane Doe.

His novel is inspired by his experiences from high school, his study of history in college, and his day-to-day interactions with teenagers as a history teacher. The book has already received a rave review from Kirkus Reviews and been featured on Buzzfeed Books.

Belanger believes there’s something particularly important and relevant about the coming-of-age story.

“We’re all coming of age all the time. There’s no end to the rites of passages in life,” he said.

Through his book, he wants people to learn the importance of getting help and being there for each other. “One of the things that inspired me the most is that we are all going through challenging times. We often don’t know the strategies for dealing with them,” he said.

At his book launch, Belanger spoke with the unlikely combination of earnestness and wry humor that characterizes the book. “When you have a full time job, it is very hard to find the time to write. But there was an urgency to this story that I hadn’t experienced before,” he said.

“I was also trying to not go to the gym,” he added. 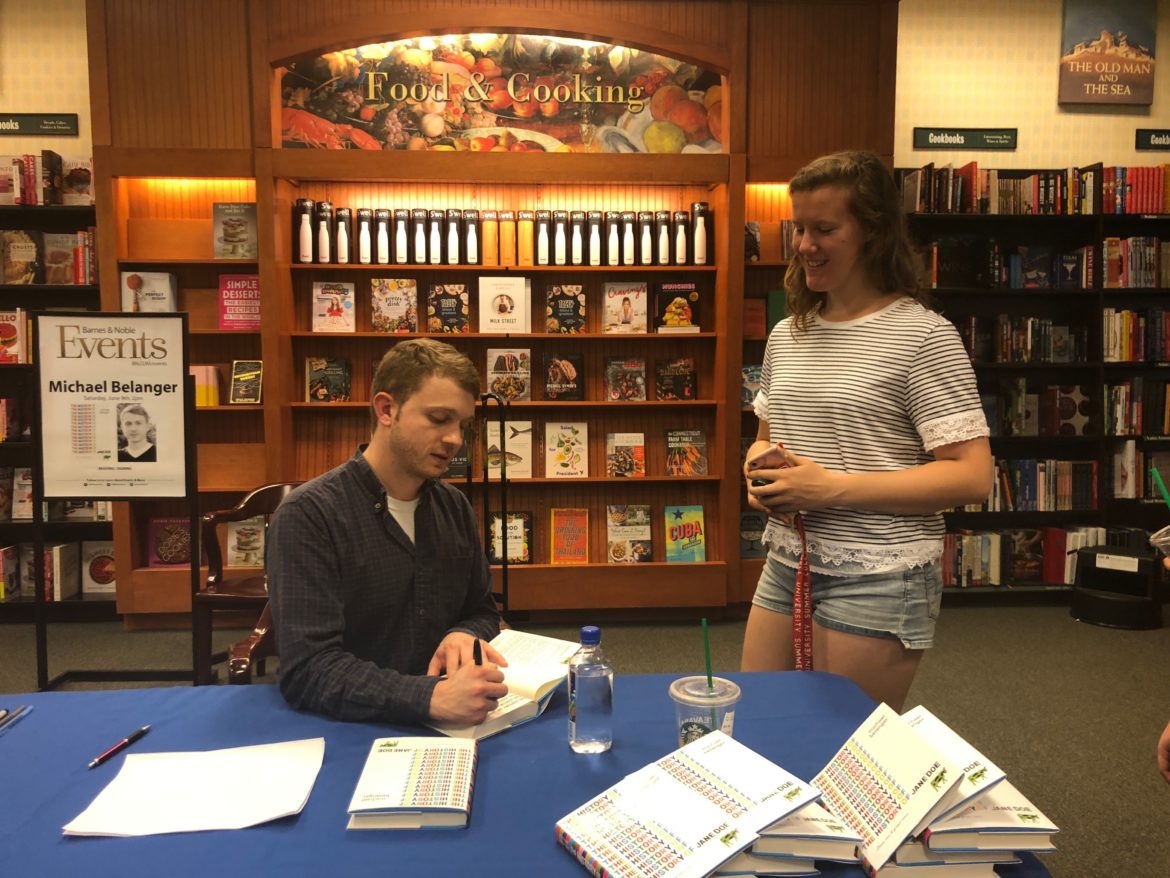 As an Innovation Lab teacher and advisor to The Greenwitch literary magazine, Belanger has mentored many young writers.

“Mr. Belanger was probably the main reason I started writing,” said one of his students, Emanuel Martinez. “He’s the one teacher who helped me realize that writing could be more than a hobby. I began to see myself as a passionate writer and creator.”

Gabriella Mendoza, a freshman staff member of The Greenwitch, said, “His experience in the industry has made him very insightful and he’s such a great and kind person. He gave me faith in what I was writing, writing that I thought was nothing special.”

Belanger is particularly inspiring to students because he is a real-life example of a successful writer.

“I’ve always seen a career as a novelist on the same level as an actress or singer, as not something that normal people go and do,” said student Gracie McCooe. “But seeing my teacher and role model write an amazing book has made a career in writing seem possible. I’m so proud and excited for him.”

Belanger would come to the high school early to work on his novel. Many of his colleagues have known him throughout the process of writing The History of Jane Doe.

“It has been very exciting to watch one of my colleagues become a writer and to wonder at the miracle of the thought process that went into this book,” said English teacher Ellen Johnsmeyer. “I can’t believe that this was all in his head.”

Innovation lab teacher Jessica Von Brachel said, “When I first started working with him five years ago, he told me that he was a writer and he’s written two novels but they haven’t been published. It’s been so exciting to see him succeed.”

“Not only do I love his book, but my daughter loves it too,” she added.

Belanger’s fiancé, Emily Hernberg, was the first reader of The History of Jane Doe.

“One thing that people should know about the writing process is that it’s never done,” she said. “You just have to keep going, keep revising. It’s a frustrating but rewarding process.”

Belanger is already working on another book. “I thought I’d feel able to breathe after this book but now I want a second book,” he said. “There’s no end, there’s only the horizon.”