Moving to Greenwich at age 14 from the Bronx, Greenwich’s Danny Morales experienced a bit of culture shock.

“Growing up in the Bronx and moving to Greenwich was a life changing experience,” said Morales. Almost 25 years later, he reflected on his boyhood and the role martial arts has played in his life. As a boy in the Bronx, he had been used to living among “thugs and killers” and started martial arts at age four, with his brother, nine years older, leading the way.

In Greenwich, Morales became “a bully’s bully.” He said that although he was the shortest boy in his grade, he found himself fighting the bullies at school – and winning.

At Central Middle School and later at Greenwich High School, Morales, who is Puerto Rican and speaks fluent Spanish, continued to fight.

“The Latinos would pick fights with me because they thought I was black,” he said.

“Once, at the bus stop in Stamford, they circled around me and were talking to each other in Spanish,” he recalled. “Then I spoke to them in Spanish.” Morales said that incident ended in the other boys wanting him to become part of their group.

“It became a race thing. …but I’m color blind. I hang out with everyone,” Morales said.

Morales  noticed something unique about the boys in Greenwich when he was a teen. “Here, you shake hands after your fight,” he said. 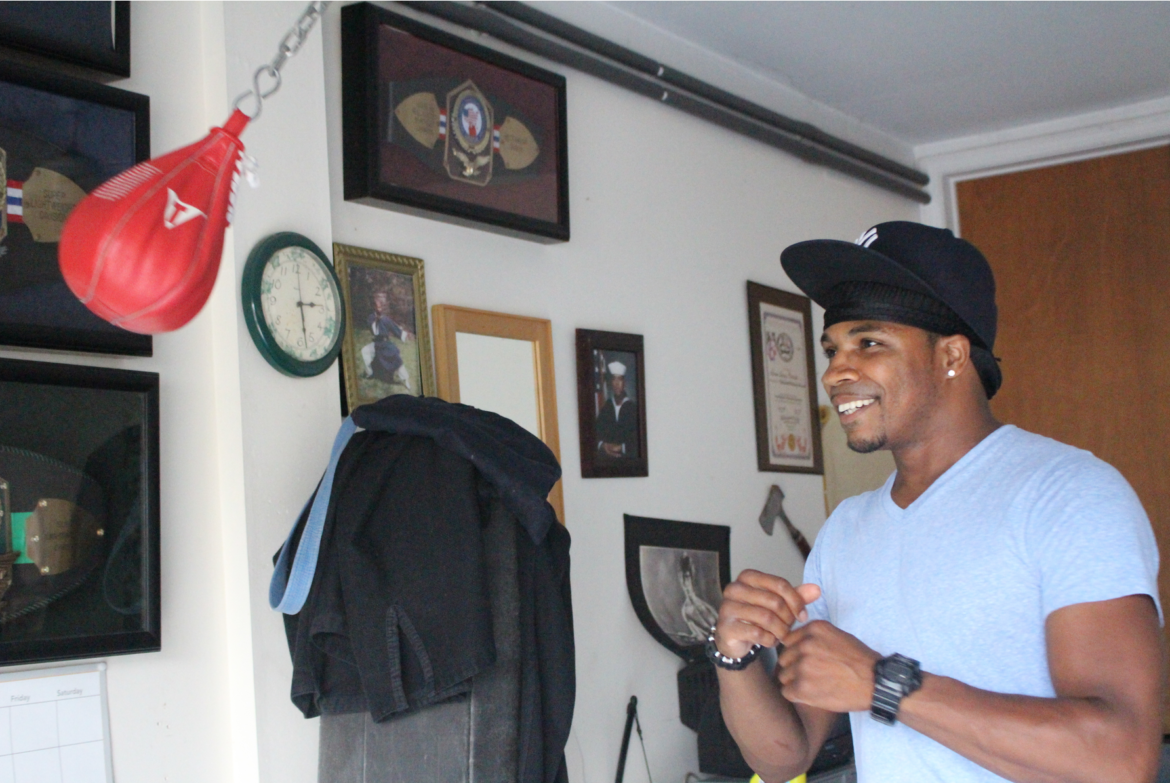 After his tumultuous teen years, which Morales said were rife with stupid decisions, fighting served as a ticket out. “Fighting was one of the only things I felt like I was really good at,” he said. “It was my outlet and my way to become successful.”

After graduating Greenwich High School in 1996, Morales headed to a small art school in Philadelphia. When he was home from college, he saw his friend John Harvey Taborda who had just opened his own taekwondo school, and he asked Morales to come and teach kickboxing.

“I remember thinking at the time that I knew how to train myself in kickboxing, but I didn’t know how to teach others,” Morales said. He called upon his older brother to show him how to actually teach kickboxing to others.

“Teaching was fun,” Morales said. “I was able to teach people how to do things that they thought they would never be able to do.”

As Morales began to teach others in kickboxing and martial arts, he also prepared for his own amateur and professional fights.  He traveled all over the United States, earning seven pro kickboxing wins and the ISKA title as a two-time United States World Champion.

“He was like a grandfather to me,” said Morales of his mentor. “We would train at the YMCA every weekday for three years straight, and he taught me everything he knew about boxing. If it wasn’t for him I wouldn’t be where I am with boxing or in life.”

When Santangelo retired from training, Morales wasn’t sure what his next direction would be or whether he would even continue with martial arts.

In a chance meeting, Danny’s younger brother connected him with Jiu-Jitsu Champion Daniel Gracie. Gracie needed a kickboxing and boxing trainer for himself, and Morales proved the ideal fit as his trainer for many years.

“Now I teach for Renzo Gracie, Daniel Gracie and Marcio Stambowsky,” Morales said. “And to think eight years ago I thought I was done with martial arts.”

Morales not only found the direction for his career and talents as a trainer, but he works with world famous jiu-jitsu and mixed martial arts coaches and fighters.

Living in Byram with his own family, which includes kids at New Lebanon and Greenwich High School, Morales said he is grateful his mother pulled up stakes in the Bronx all those years ago.

“Greenwich changed my life completely,” he said. “I love this town. I’ve received 110% support from this town.” 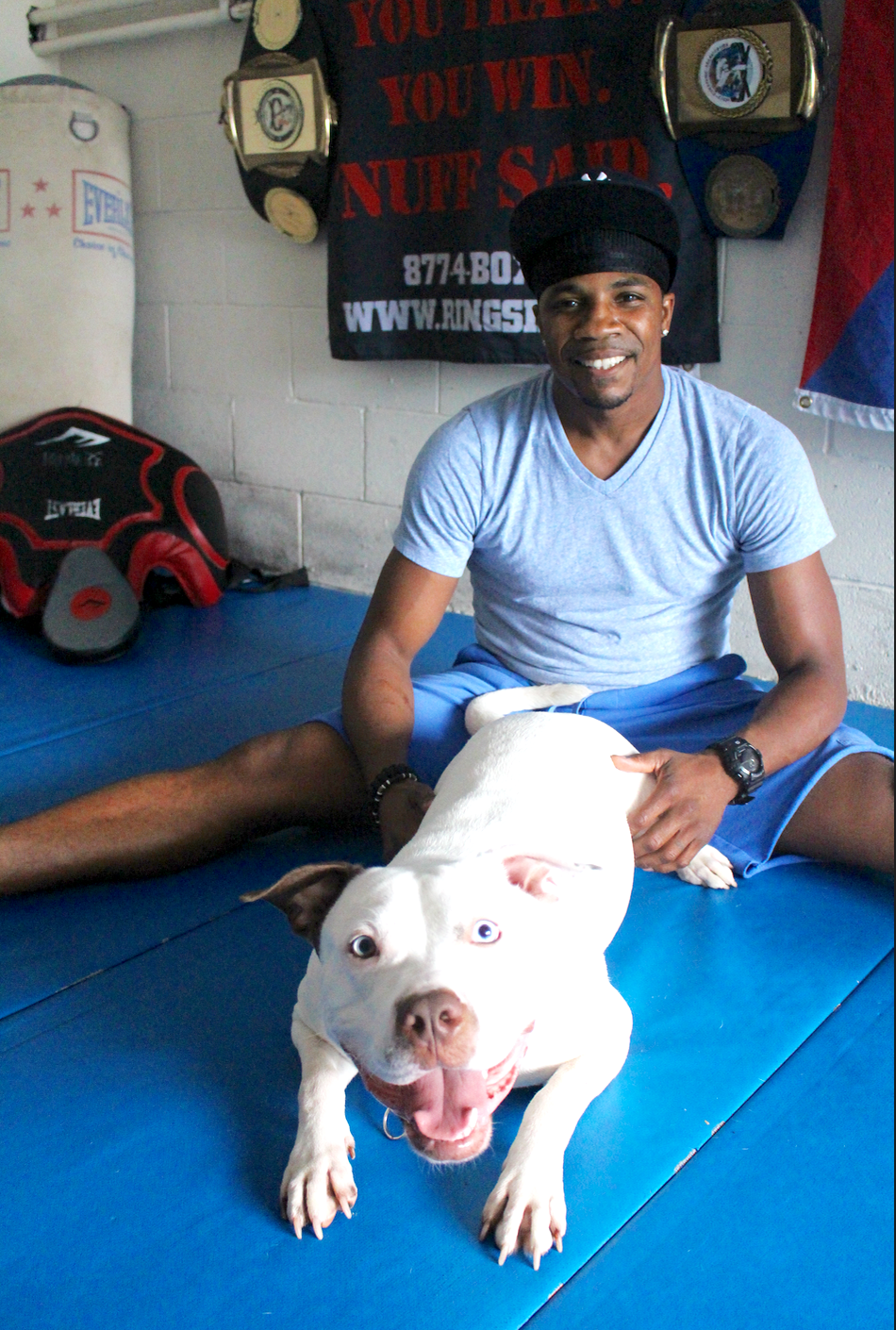 Danny Morales and his dog Zina, a beautiful white pit bull with one blue eye and one brown eye. Credit: Leslie Yager

Teaching remains Danny’s passion. In Greenwich, his private clients include athletes ranging from amateur and professional fighters, to police officers and triathletes.

Greenwich Police officer Alan Pesce said Danny recently encouraged him to compete in an amateur boxing event in Stamford. “He gave me the confidence to compete against a highly skilled opponent in a three round bout,” Officer Pesce said. “He is passionate about what he does and leads by example.”

Officer Alex Testani said Morales has been involved in the Greenwich Police women’s self-defense training for many years as a volunteer. Officer Testani, who also works with Morales to sharpen his own boxing and kickboxing skills, described his sessions as very focused.

“He addresses my weaknesses and helps me build those into strengths. He wants me to be a very well-rounded fighter, both on my feet and on the ground,” Officer Testani said. “He believes in me. He’s emotionally invested in what I’m trying to accomplish. I wouldn’t train with anyone else.”

Anja Krieger-Redwood began working with Morales in an attempt to branch out from the traditional Ironman routine.

“I came to Danny self-conscious about trying something new, and afraid of how slow I might be at picking up this whole kickboxing thing,” Krieger-Redwood said, adding that Morales’ patience and good humor helped her make a smooth transition to the sport.

“He brings a challenge and laughter to every session,” she said. “All while he’s paying attention to the details and building skills piece by piece.”