Did you know that the Bowman Observatory in front of Julian Curtiss School is open to the public on the 2nd and 4th Tuesday of the month when skies are clear? Tuesday, Feb. 11 is a 2nd Tuesday and the forecast is for clear skies. Rick Bria plans to open the observatory for stargazing from 7-9pm.

It’s school vacation week and if you’re looking for something cool to do with the kids, this is fun, educational and free!

In fact, if you’ve never visited the observatory, this is one of the best perks we have in Greenwich.

Rick Bria, who found his passion for astronomy at Greenwich High School back in the 70s, is the designated observatory keyholder and he is the ideal host on open telescope nights.

The Bowman Observatory, with its shiny new dome, turns 73 this year, and, like an heirloom passed from generation to generation, it has a unique story. Situated atop a small knoll outside Julian Curtiss School, the observatory, sited perfectly for star gazing, was constructed 1941 and the adjacent schoolhouse opened in 1946.

Owned by the Board of Education, the observatory is named after, Dr. J. Edgar Bowman, the Greenwich resident who donated the original telescope. The observatory itself was the brainchild of Alden Smith, the science teacher who nurtured the project from dream to reality.

When work began on the observatory in 1941, townspeople guessed it might be a silo or a fort for the war effort. Speculation may have continued for some time, considering the project seems to have stalled a while. In the spring of 1943, nearly two years after ground broke, Greenwich Time published a letter to the Board of Education from the Carpenters Local Union 196 offering their services, for free, to finish construction on the “telescope house.” The same article included the Board of Education’s reply declining the offer, indicating that “on the 15th of March, the Board of Estimate appropriated funds for the completion of the observatory, so your very kind offer is not necessary.”

Much has changed in the field of astronomy in 73 years and many telescopes are operated remotely.  Distant stars are often viewed on  computer monitors, but nothing replaces the anticipation of walking up the hill on a clear night to the Bowman Observatory. 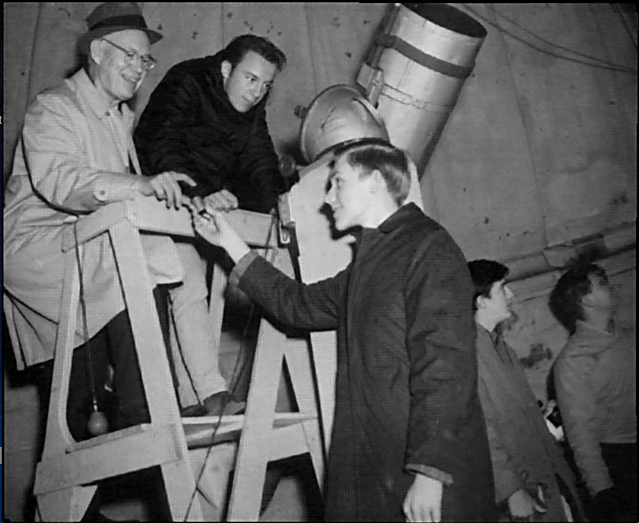 Inside the Bowman Observatory, 1968. Credit: Compass.