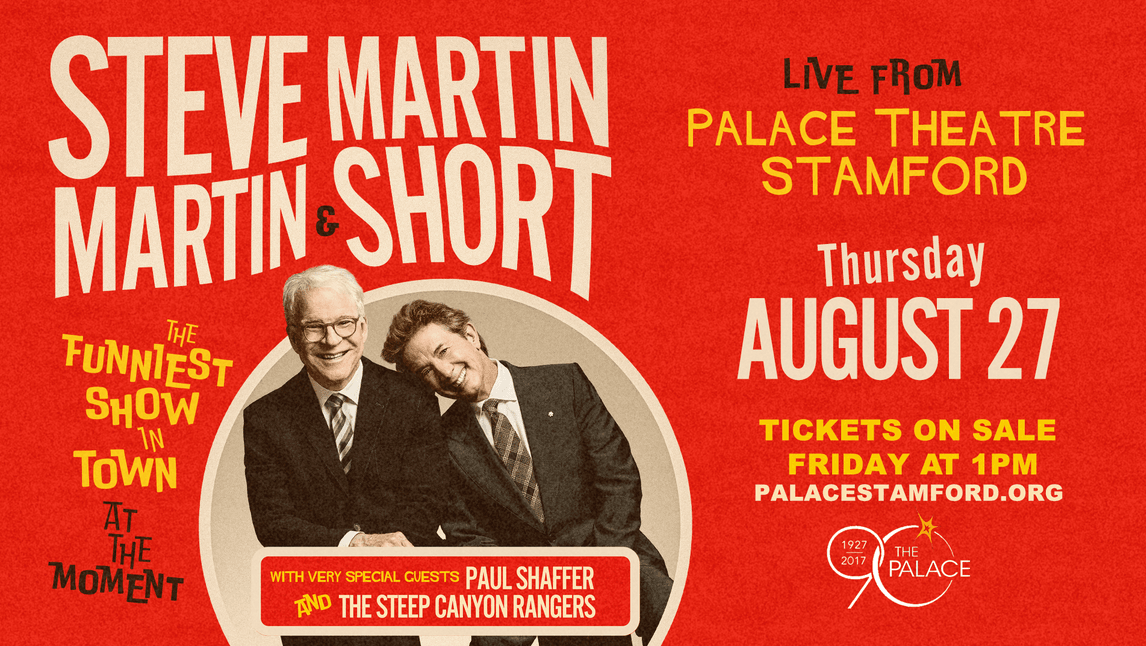 The Palace Theatre and Parachute Concerts announced on Tuesday that comedy legends Steve Martin & Martin Short will appear at The Palace Theatre in Stamford for one performance,  “The Funniest Show in Town at the Moment,” on Thursday, August 27, 2020 at 7:30 pm.

The duo will be joined on stage by former ‘Late Show with David Letterman’ bandleader Paul Shaffer and Grammy Award-winning bluegrass band The Steep Canyon Rangers.

Steve Martin and Martin Short’s “The Funniest Show in Town at the Moment” is a show that redefines the form in unexpected and profound ways, from two of the funniest, most influential and acclaimed talents of the past century.

Their humor is often subversive, but it is always a joyous self-deprecating romp from two comedy masters driven to make each other laugh as much as the audience. The jokes come at you at a rapid-firepace with little set-up and big punch lines as they mock Hollywood and the fickle nature of celebrity, but the comedy truly soars when they lovingly (and relentlessly) roast each other.

Martin and Short’s chemistry and timing on stage reflects a friendship forged over three decades which developed when they met for the first time on the set of the 1986 film “Three Amigos.” These two titans of comedy have been touring together since 2015, when they launched their first live show entitled “A Very Stupid Conversation.”

Steve Martin is one of the most well-known talents in entertainment. His work has earned him an Academy Award, five Grammy awards, an Emmy, the Mark Twain Award, and the Kennedy Center Honors. Martin began his career on “The Smothers Brothers Comedy Hour” for which he earned his first Emmy Award for Outstanding Writing Achievement in Comedy, Variety or Music. Martin shone as a stand-up on “The Tonight Show Starring Johnny Carson” and NBC’s “Saturday Night Live.” His films:
The Jerk, Planes, Trains & Automobiles, Roxanne, Parenthood, L.A. Story, Father of the Bride, and Bowfinger are all regarded as widely popular, timeless successes.

Martin Short, a celebrated comedian and actor, has won fans and accolades in television, film and theater since his breakout season on “Saturday Night Live” over 30 years ago. Short won his first Emmy in 1982 while working on Canada’s SCTV Comedy Network, which brought him to the attention of the producers of “SNL.” He became an “SNL” fan-favorite for his portrayal of characters such as Ed Grimley, lawyer Nathan Thurm and “legendary songwriter” Irving Cohen.

His films include: Three Amigos, Innerspace, Three Fugitives, Clifford, Pure Luck and “Tim Burton’s Mars Attacks. One of Short’s most memorable roles was in the remake of Father of the Bride as Franck the wedding planner, a role he reprised a few years later in Father of the Bride Part II.