On Thursday cast members from the King School’s production of The Laramie Project performed the first three lines, plus ten minutes from the third act of the play.

Brief as it was, it was a powerful reminder for everyone old enough to remember headlines following the torture and death of Matthew Shepard, an openly gay student who walked into a dive bar in Wyoming one night for a drink 20 years ago.

The audience however, was King School upper school students who weren’t even born when the violent anti-gay murder took place in 1998.

That said, the students are living a similar moment in history, with 11 lives taken in Pittsburgh at the Tree of Life synagogue just two weeks ago.

Leigh Fondakowski, head writer of The Laramie Project, who collaborated with King School on the production 11 years ago, returned on Thursday to speak to students.

Fondakowski said that after the brutal assault happened, and Matthew Shepard was left tied to a fence, his six day fight for life became a national news story that was covered by all major media outlets. 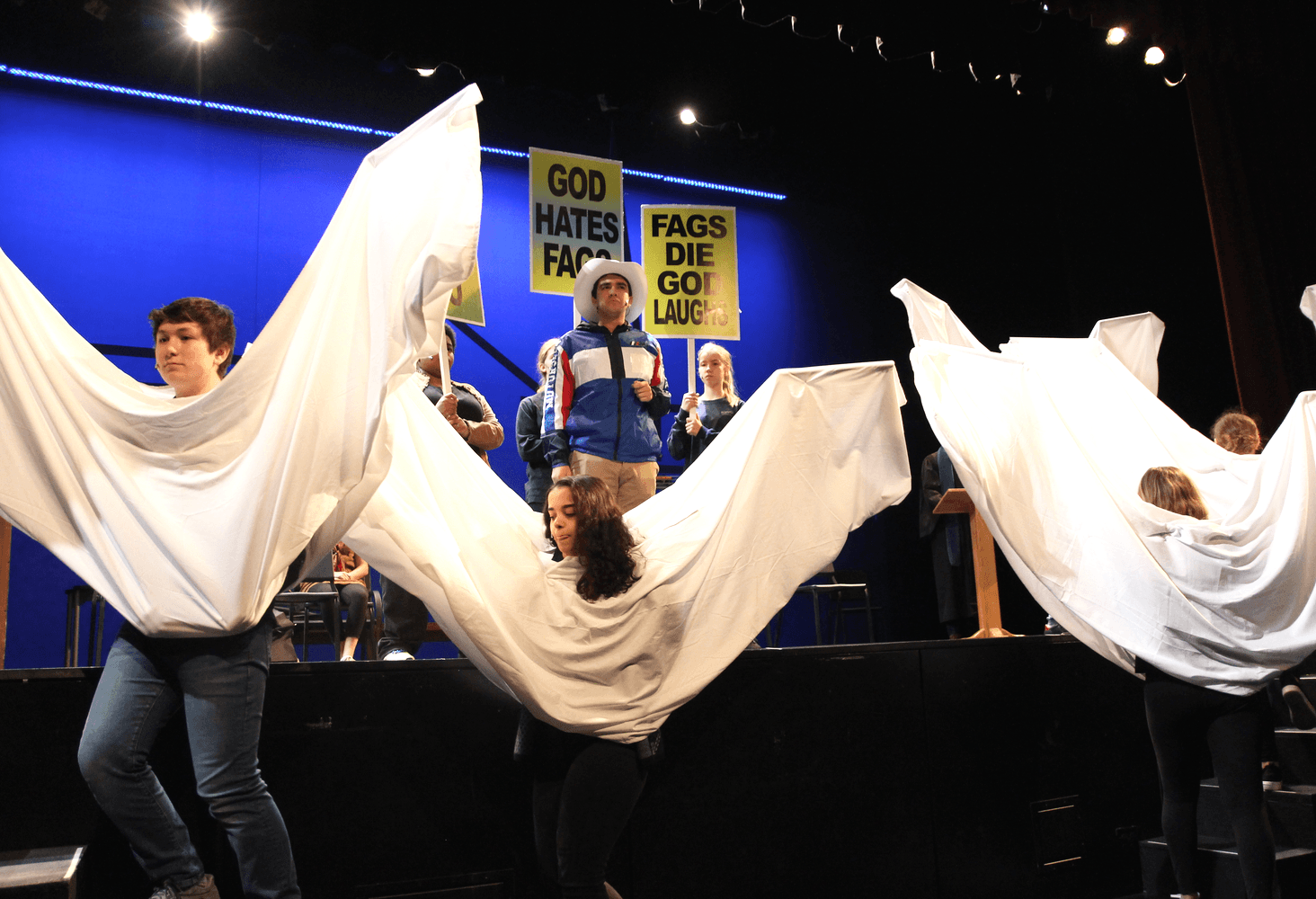 Where free speech and freedom of religion confront each other. When The Westboro Baptist Church members protested Matthew Shepard’s death because he was gay and Church members shouted slurs like “God Hates Fags,” the response from the LGBTQ community was to dress as Angels, with large wings. They blocked the protesters from view as the family of Matthew Shepard entered the courthouse for the trial of their son’s murder. The “angels” were provided earplugs to block out the shouts of protesters. Photo: Leslie Yager

“There was a groundswell of hope he would survive and it became a giant story,” Fondakowski said. “I was a young artist, 28 years old at the time, and I was working with the Tectonic Theater Project and our leader said, ‘Do we as artists have a role to play in this national conversation happening about hate?'”

Fondakowski said at the time they knew hundreds of gay people were killed every year, but Matthew Shepard’s murder was the first time the whole country stood up and said it should not have happened.

She said she was one of ten people who went to Wyoming to conduct interviews with Laramie residents, and later transcribed their interviews for a fast draft of a two-act play that ended with Matthew dying.

“We were wondering if that was the end of the story,” she recalled. “We decided to go back for the trial of Russell Henderson.” 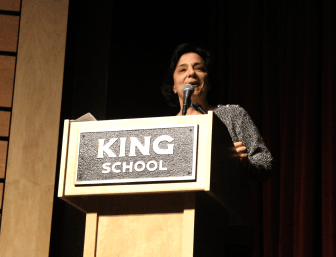 Dr. Jackie Martino, director of the Performing Arts department at King School, had directed students in the Laramie Project in its 2007.

“It was a play about a town in crisis,” Fondakowski said. “We returned for both trials of the perpetrators and documented what happened to the town as a result of this crime.”

Fondakowski said the play premiered in Denver and then went to New York where it was not successful and closed quickly after a poor New York Times review.

“Then HBO called,” she said.

“They wanted to make a movie based on the play,” Fondakowski continued. “They wanted movie stars to play the townspeople, which was counter-intuitive. We grappled with that.” 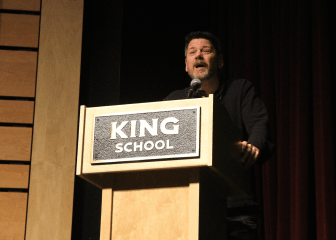 In the end Fondakowski said her group gave their blessing to HBO knowing that millions of people would see the film.

“We thought about gay kids sitting in their towns with no access to gay people, no access to a gay community of any kind, and that they might be touched by watching that HBO film. That was the deciding factor,” Fondakowski said.

The success of the HBO production led to many high schools and regional theater groups staging The Laramie Project.

“It’s taken on a life of its own,” Fondakowski said. “It’s a testament to the Shepard Foundation and Matthew’s parents getting anti-hate crime legislation passed in Congress.”

Even though in the intervening years since Shepard’s murder, gay marriage has become legal, Fondakowski said she is still struck by how much has not changed.

“This play should feel historical and outdated, but it still feels like it could happen again tomorrow or today,” she said.

King School’s Dr. Jackie Martino, who directed the Laramie Project at the school back in 2007, said she has been busy doing outreach with parents and faculty to prepare the students students.

“The school and community has been unbelievable supportive,” she said, adding the interment of Matthew Shepard’s ashes finally took place two weeks ago on Oct 26 at Washington National Cathedral.

“I had no idea his ashes were never laid to rest because the Shepards were worried people would defame his grave and that they had to carry that fear all those years,” Martino said.

The King School performing arts center is located at 1450 Newfield Avenue in Stamford. 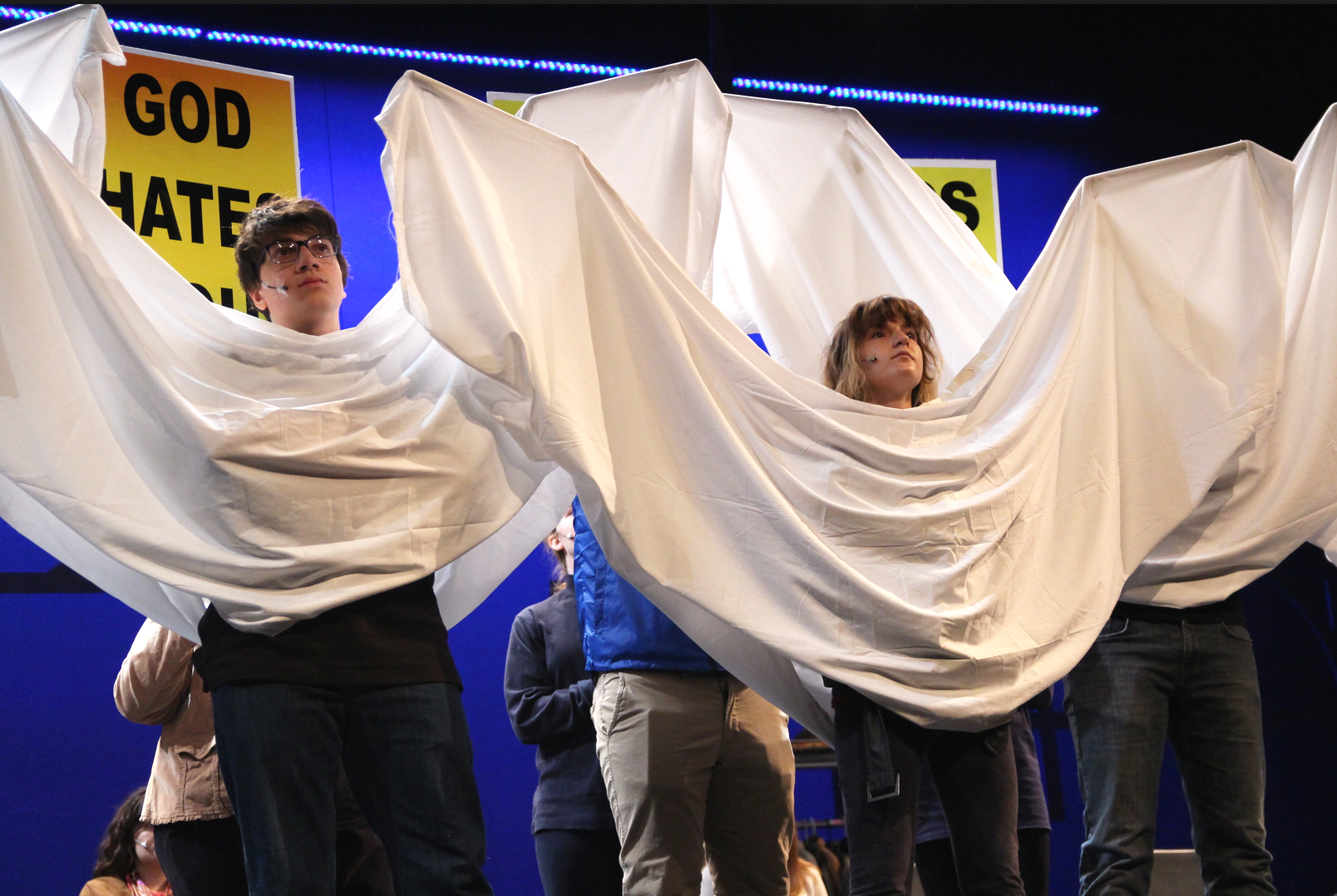 The view of Westboro Baptist Church protesters at Matthew Shepard’ funeral were blocked by members of the LGBTQ community with “angel wings” and earplugs. 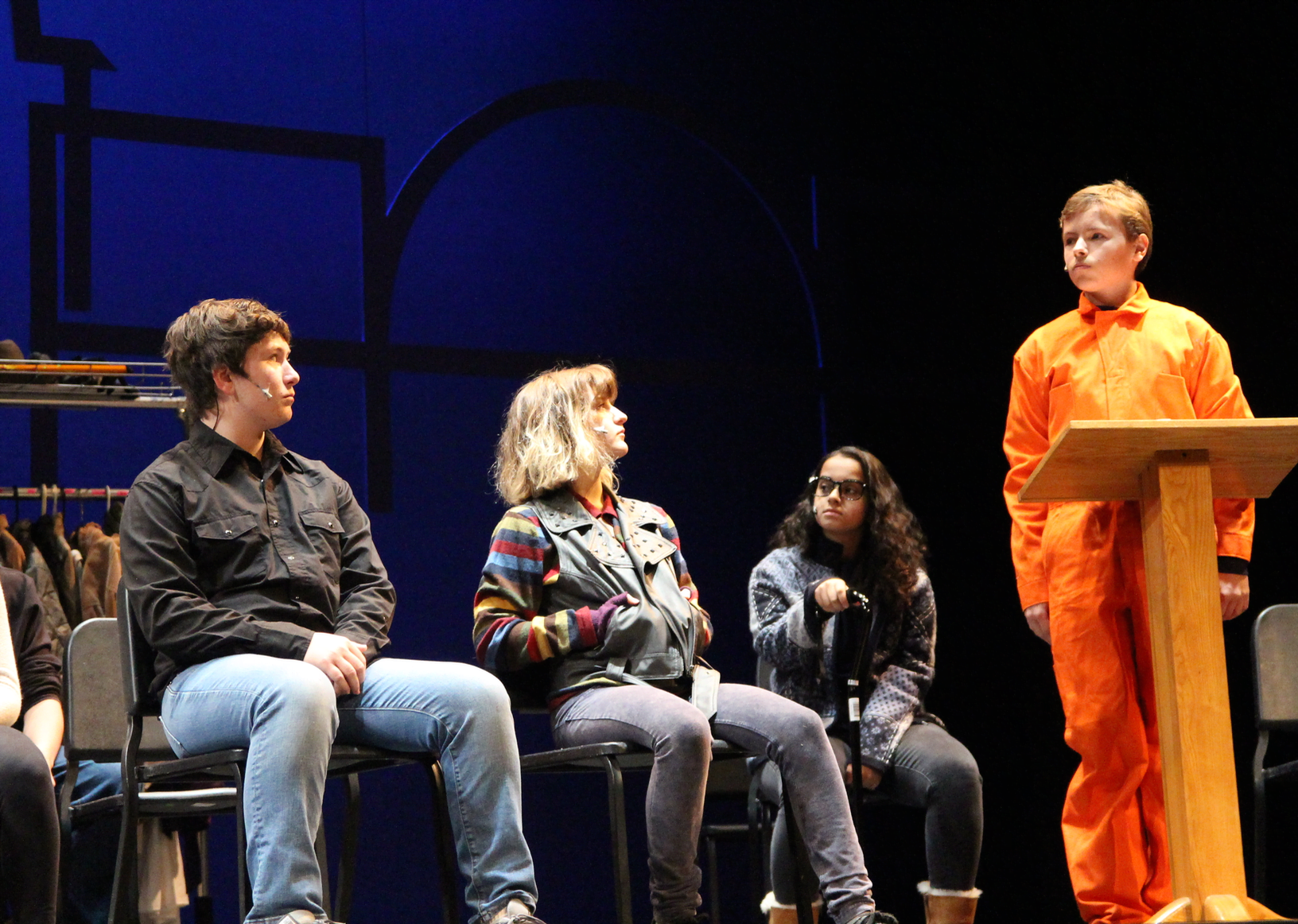 In a preview of King School’s production of The Laramie Project on Nov 15, one scene included words from Russell Henderson, who received two consecutive life sentences for his part in the murder of Matthew Shepard in 1998. Photo: Leslie Yager 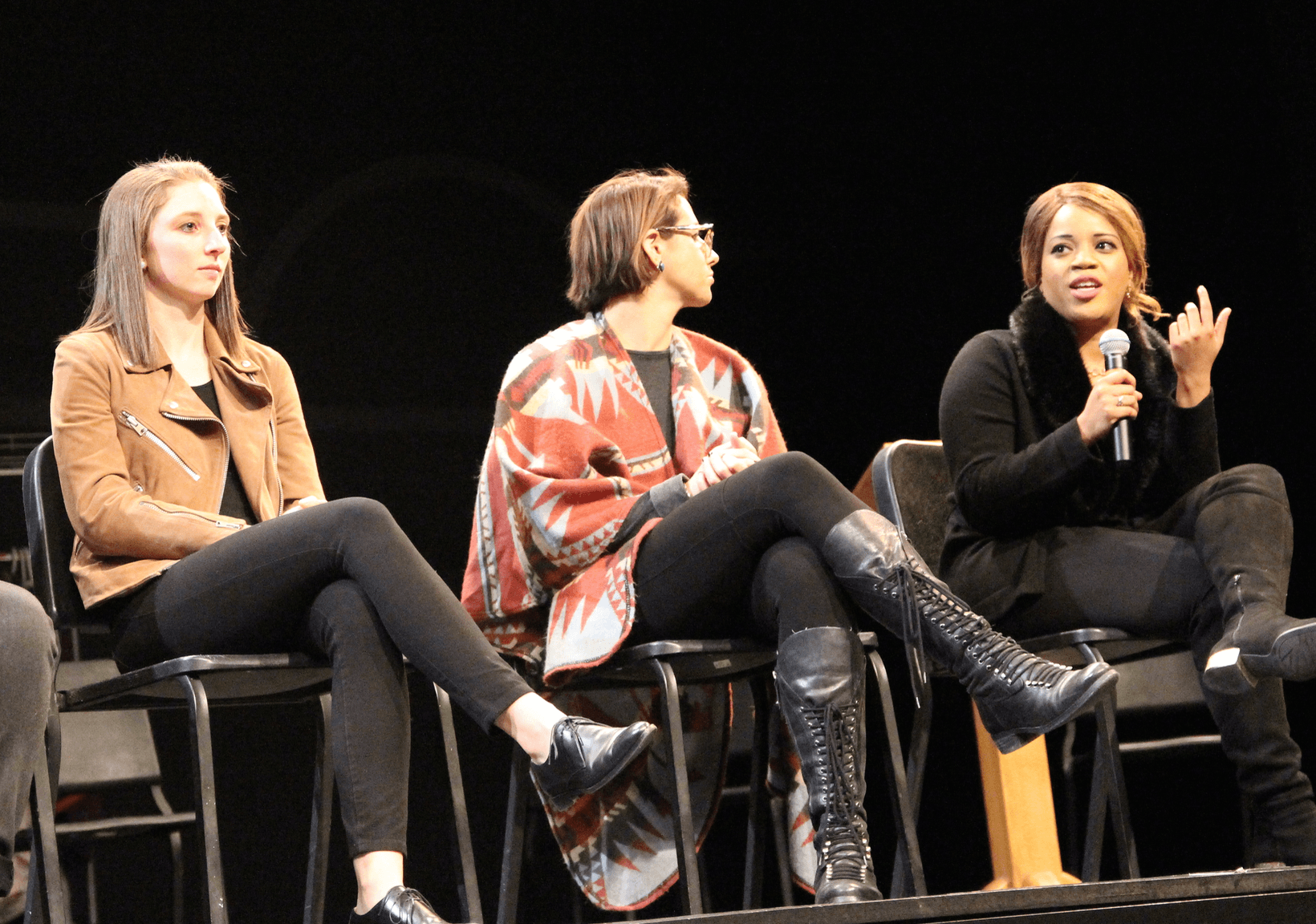 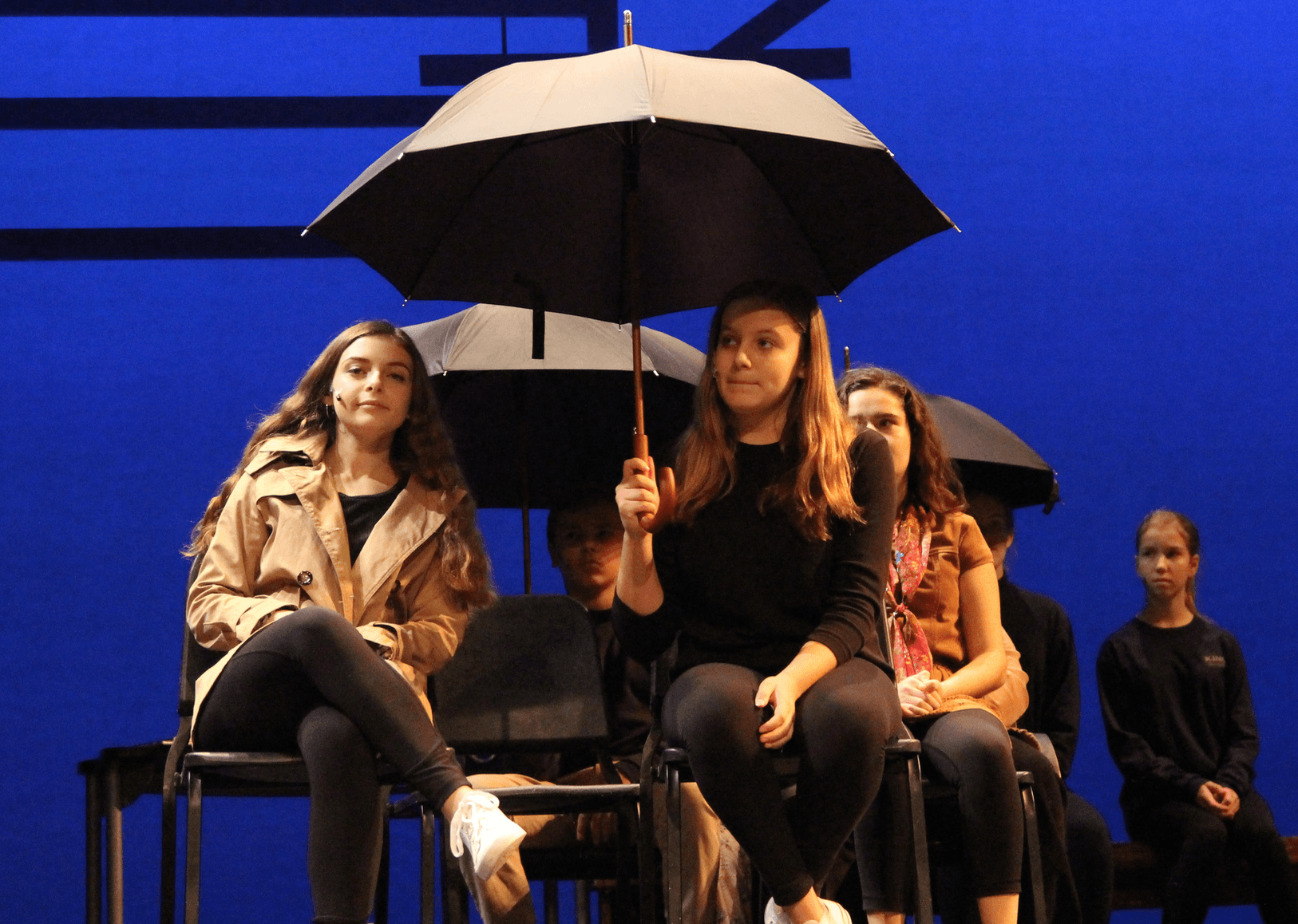 King School actors from The Laramie Project previewed a scene depicting the funeral for Matthew Shepard who was murdered by two homophobic men in 1998. Photo: Leslie Yager