The large granite mansion that lawyer, clergyman, and historian, the Rev. Dr. Francis Lister Hawks built in the late-1850s was first known as “Hawk’s Nest,” reflecting the name of its owner, local wildlife, and commanding location high on a hill overlooking Long Island Sound and the surrounding salt marsh, woods, farmland, and burgeoning village of Greenwich.

In 1858, the imposing private residence was purchased by wealthy merchant Robert Moffat Bruce, who, a half century later, deeded the property to the Town of Greenwich, stipulating that it be used as a “…museum for the use and benefit of the public.” In so doing, he also lent his name to what would become an enduring Greenwich cultural landmark, the Bruce Museum, established in 1912.

Opening on April 4, 2020, the exhibition House on the Hill: The Changing Face of the Bruce Museum will explore how the views of the Bruce Museum have transformed over time. Numerous historical images will show the evolution of the structure from its conversion from mansion to modern museum highlighting the intersections of art and science.

Some of these changes have been subtle, some have been profound. In the 1950s, the Museum was threatened by the planned route of the Connecticut Thruway (now incorporated into Interstate 95). The state compensated Greenwich for the lost parkland, and funds were used to construct a major addition to the Museum, which was unveiled in 1958.

The building was modified again in 1992-93, a renovation and expansion that allowed it to keep pace with both its foundational role in the community and museum standards of the day.

Helping tell the story of the Bruce Museum’s architectural history are quotes and citations from founding staff, community leaders, and visitors both young and old over the generations.

The exhibition will be on view in the Bantle Lecture Gallery through May 31, 2020, a moment in time that coincides with the next iteration of the changing face of the Bruce Museum: the July 2020 groundbreaking for the New Bruce addition, a transformative project that will expand the Museum from 30,000 square feet to more than 70,000 square feet, adding state-of-the-art exhibition galleries for art and science, new education spaces, and a restaurant, auditorium, and public spaces that will ensure the Museum remains a vibrant center for the Greenwich community. 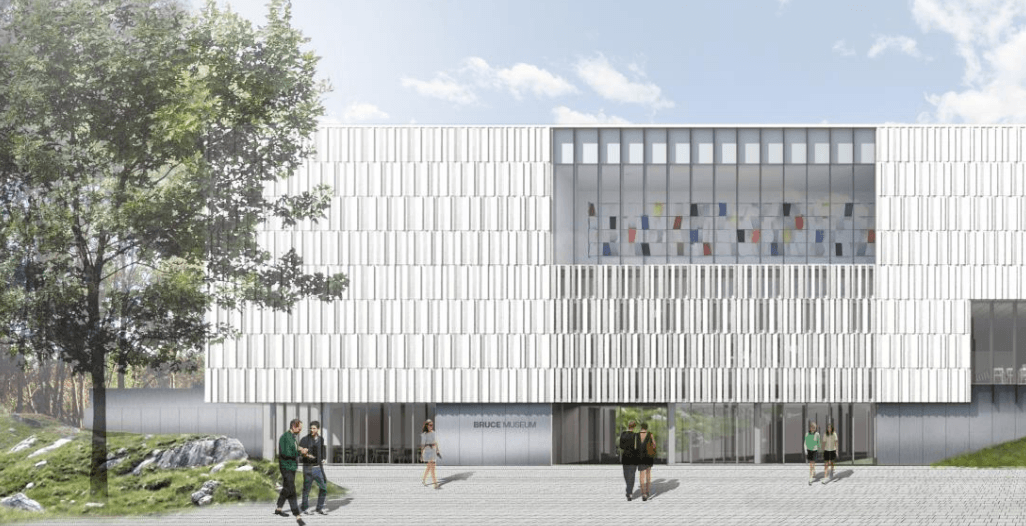 Designed by the New Orleans firm of EskewDumezRipple, the new addition to the Bruce Museum will house state-of-the-art exhibition, education, and community spaces.

The ambitious project to reimagine the Bruce has been proceeding in phases. A top-to-bottom renovation of the Museum’s changing gallery spaces, begun in September 2019, was completed on time to host the opening of major new exhibitions of art and science on February 1.

The current phase of the construction project is now under way: the renovation and reinvention of the permanent science gallery.

The centerpiece of the New Bruce is the William L. Richter Art Wing. Designed by the award-winning New Orleans firm of EskewDumezRipple, the three-story addition will open directly onto Bruce Park and feature a delicate striated façade of cast stone and glass inspired by the surfaces of Connecticut’s quarries and the rock outcrops of Bruce Park.

“As the Museum proceeds with its ambitious expansion plan, it is important to see the history of how we have arrived at this momentous occasion,” says Timothy Walsh, Collections Manager and, as the Museum’s archivist and resident historian, curator of the exhibition.

The Bruce Museum is grateful for exhibition support from Susan and Bill Mahoney, Heidi Brake Smith and Scott M. Smith, the Charles M. and Deborah G. Royce Exhibition Fund, and the Connecticut Office of the Arts. For more information about the Campaign for the New Bruce, visit NewBruce.org.