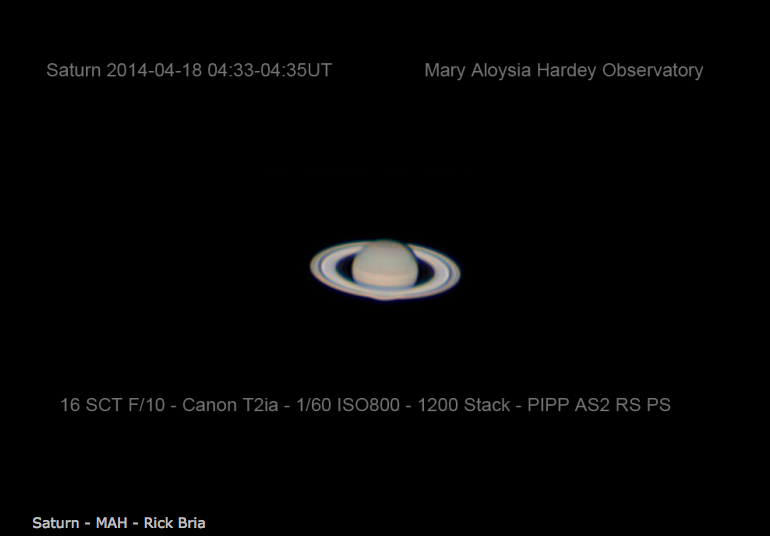 Saturn is close to Earth and opposite the Sun in May. In this case ‘close’ is a relative term as Saturn is nearly a billion miles away.

Positioned opposite the Sun, Saturn is well placed in our sky for viewing through a telescope. Saturn is famous for beautiful rings composed of countless ice particles orbiting the planet. It is thought the rings formed when a moon of Saturn broke apart.

A picture of Saturn taken at the Mary Aloysia Hardey Observatory on the morning of April 18, 2014 is attached. It is a 1200 image stack selected by software out of tens of thousands of images. This is a process called ‘Lucky Imaging’. It is when the best and clearest images are selected from a huge sample. As the upper atmospheric winds of Earth whip around and distort our view, most images of Saturn will be blurred to some extent, but some will be nearly perfect, those are the images selected by software and included in the final stack. This Saturn image stack was processed in Planetary Imaging Preprocessor (PIPP), AutoStakkert2 (AS2), RegiStax6 and Photoshop CS5.

Everyone’s invited to come check out the public observatory. Viewings are scheduled for the 2nd and 4th Tuesdays of every month, weather permitting.