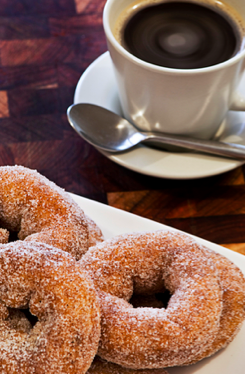 My daughter’s old tutor used to make homemade doughnuts. It was the firsttime that I had tasted the homemade ones. They taste so much better than the store bought or bakery ones, especially fresh and warm. Making them is not complicated, just a bit time consuming.

In medium-size bowl combine flour, baking powder, 1/2 teaspoon ground cinnamon, ground nutmeg, and kosher salt. Set aside. In a large-size bowl beat eggs with vanilla. Then beat in 2/3 cup sugar. Combine cream and melted butter and add alternately to egg mixture with dry ingredients. Blend lightly after each addition. Cover and place dough in fridge for at least 2 hours. Remove from fridge and roll out to 1/2 inch thickness on a lightly floured surface. Cut rounds with a doughnut cutter. Fry in oil (375 degrees) only a few at a time. Fry 1 minute on each side. Turn only once. Drain on paper towels. Add 1/2 cup sugar and 1 teaspoon ground cinnamon to paper bag and give a good shake to combine. Shake doughnuts, a few at a tine, in bag until coated. Serve warm. Makes about 1 dozen doughnuts.