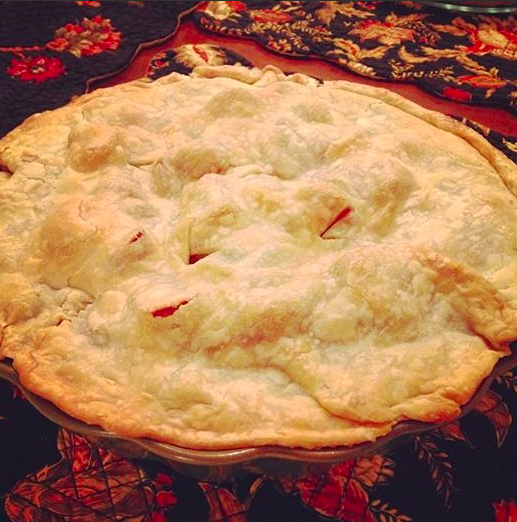 I’m all about rhubarb right now. I’ve been making rhubarb jam and now rhubarb pies. These pies are so easy to make and taste divine!

In a large-size bowl, combine strawberries, rhubarb, and lemon juice. In a medium-size bowl, combine sugar, flour, tapioca, eggs, kosher salt, and cinnamon. Stir sugar mixture into rhubarb mixture and set aside for 15 minutes. Preheat your oven to 400 degrees. Place 1 pie crust in an ungreased 9 inch glass or ceramic pie plate. Press crust firmly against sides and bottom. Spoon filling into crust-lined pie plate. Top with second crust. Wrap excess top crust under bottom crust edge, pressing edges together to seal. Flute edges. Cut slits or shapes in several places in top crust. Place in oven and bake for 15 minutes or until crust is light golden brown. Place cookie sheet on oven rack below pie in case of spillover. Reduce oven temperature to 350 degrees. Bake another 40 to 50 minutes longer or until golden brown.

Here is another recipe from Tiny New York Kitchen for crepes and berries. Why not make crepes with strawberries since they’re in season?