Unlike most local high schools, at Greenwich Academy students have their choice of three US history courses – AP US History, US History or US History/Civil Rights, which is increasingly popular.

History teacher Connie Blunden organized a trip to the deep south over spring vacation that allowed the girls, and some boys from Brunswick who also take the class, to venture through Georgia, Alabama and Tennessee to trace the footsteps of Martin Luther King. They started in Atlanta and ended in Memphis, Tennessee, which chronologically would be 1968, where Dr. King was assassinated.

Along the way, the students visited the Greyhound Bus Station in Montgomery, Alabama, which was the site of a violent attack on participants in the 1961 Freedom Ride. 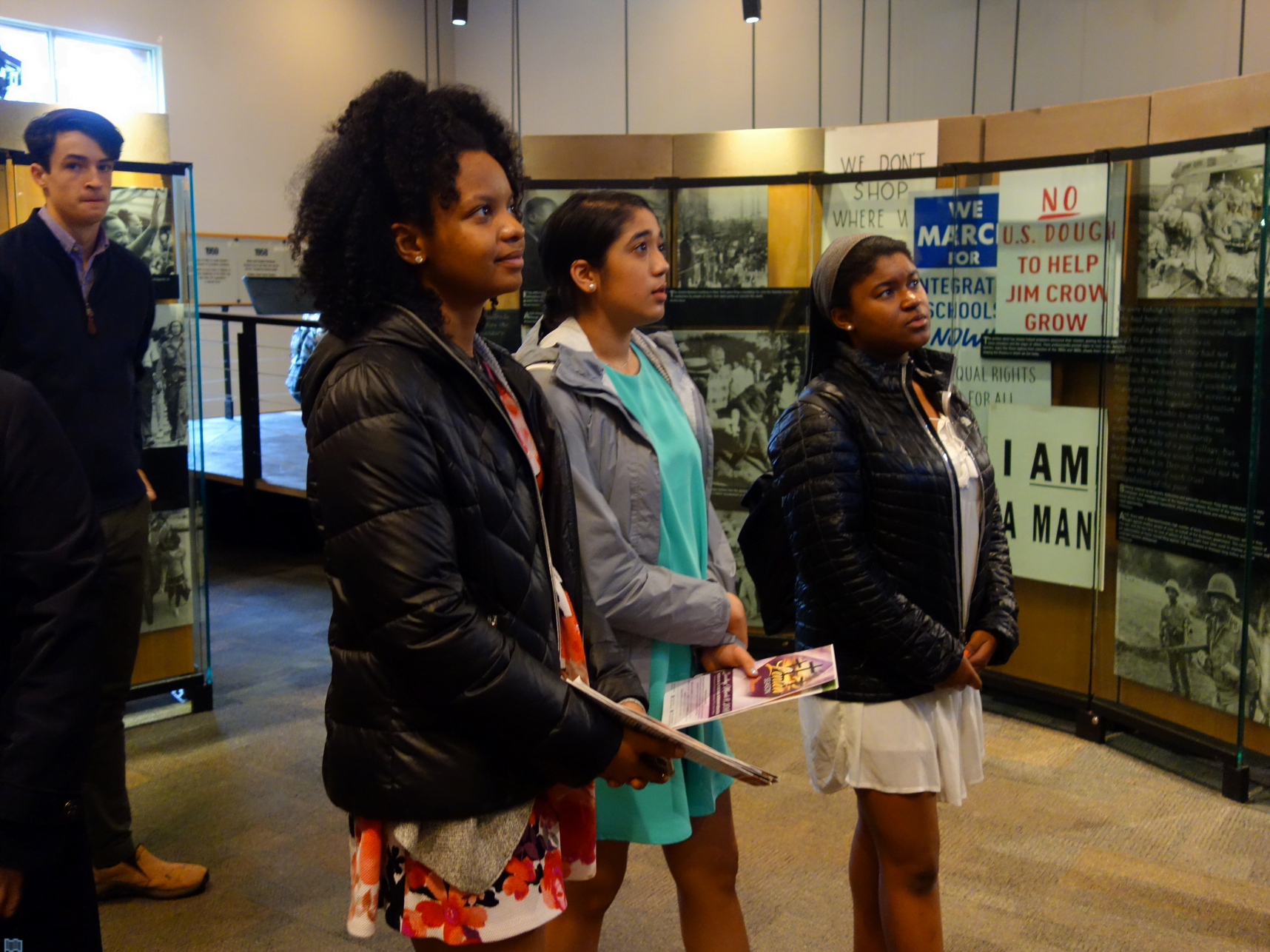 Greenwich Academy seniors Sara Poulard, Manveer Sandhu and Chandler Lane at the Greyhound Bus Station at 210 South Court Street in Montgomery, Alabama, which the site of a violent attack on participants in the 1961 Freedom Ride during the Civil Rights Movement.

GA senior Sara Poulard said that at the Greyhound Bus station, which has been preserved in time and turned into a museum, the original painted line dividing the races, remains in tact, symbolizing institutional racism.

“There was that dividing line in the 1960s that said who couldn’t use the bathroom and who couldn’t come in and have something to eat,” Sara said. “On one side of the line they were outside even if it was really hot, or if it was cold or raining. The children could smell the food inside, but they couldn’t have any. We really felt that separation.”

The students visited the Ebenezer Baptist Church in Atlanta, where Dr. King Senior, “Daddy King,” served as pastor at a time of Jim Crow segregation laws.

They walked in silence across the Edmund Pettus Bridge in Selma where on Bloody Sunday, March 7, 1965 civil rights marchers, including children, were attacked with rocks, bats and tear gas. 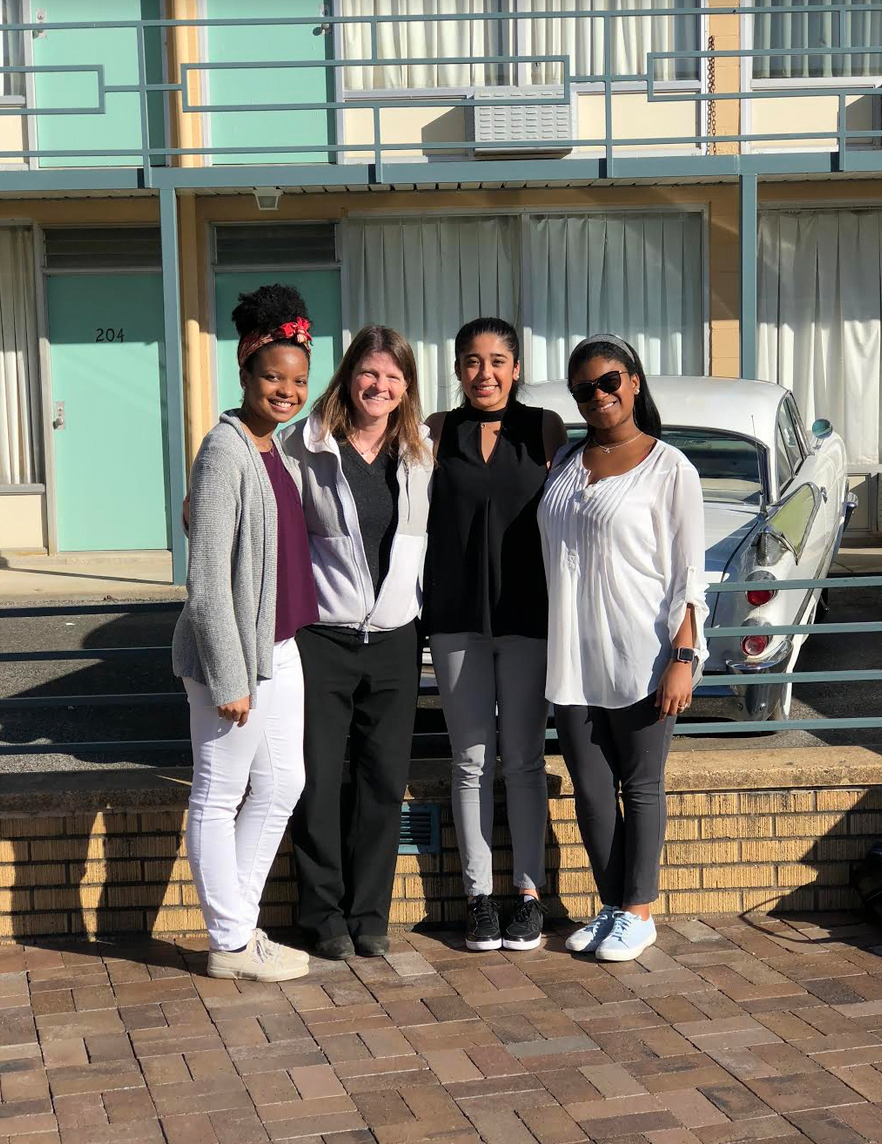 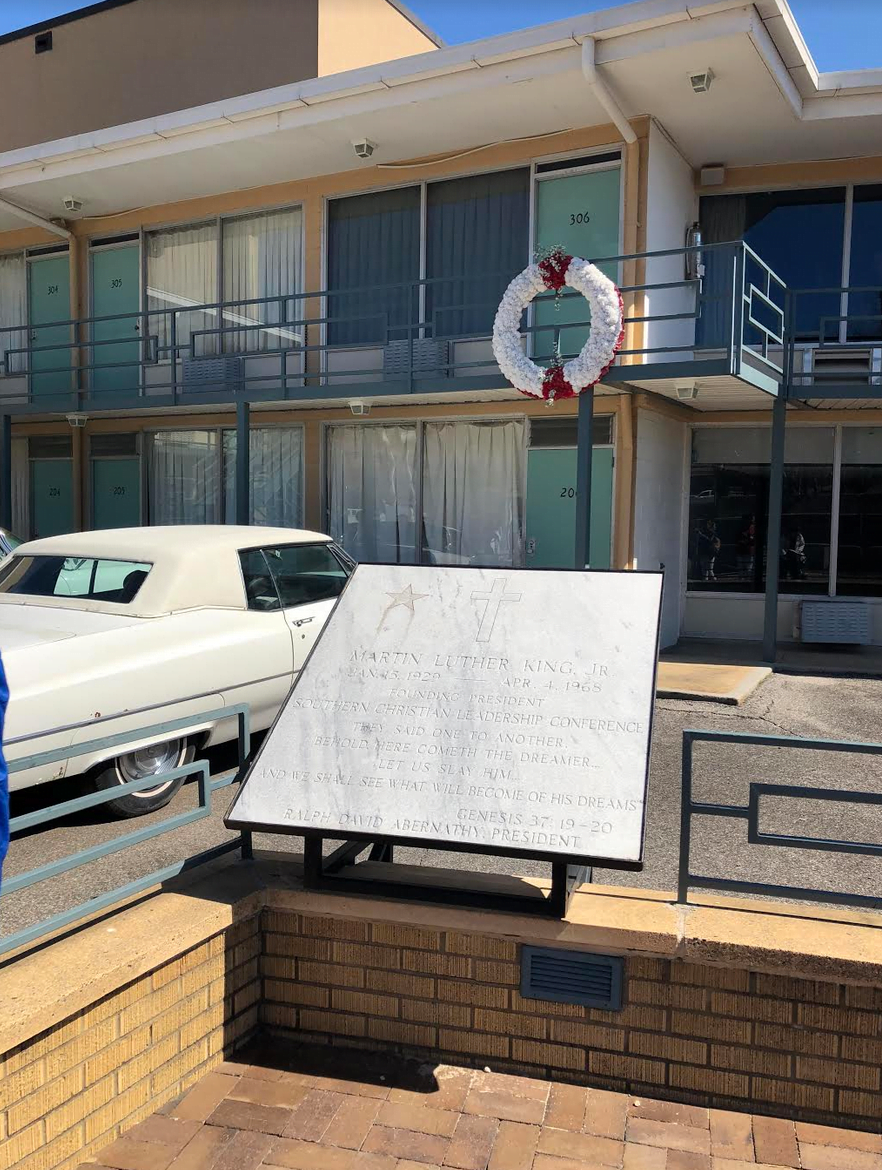 The spot where Martin Luther King was killed at the Lorraine Motel in Memphis, Tennessee. Contributed photo

They also visited the Lorraine Motel in Memphis where Dr. King was assassinated.

Along with Sara, seniors, Manveer Sandhu and Chandler Lane also completed the course as juniors but were invited to serve as chaperones this year.

“At Ebenezer Baptist Church the original small brick church is preserved,” Sara said. “In the church there was an audio recording of him giving a prayer. It was very impactful because we could close our eyes and feel his presence.” 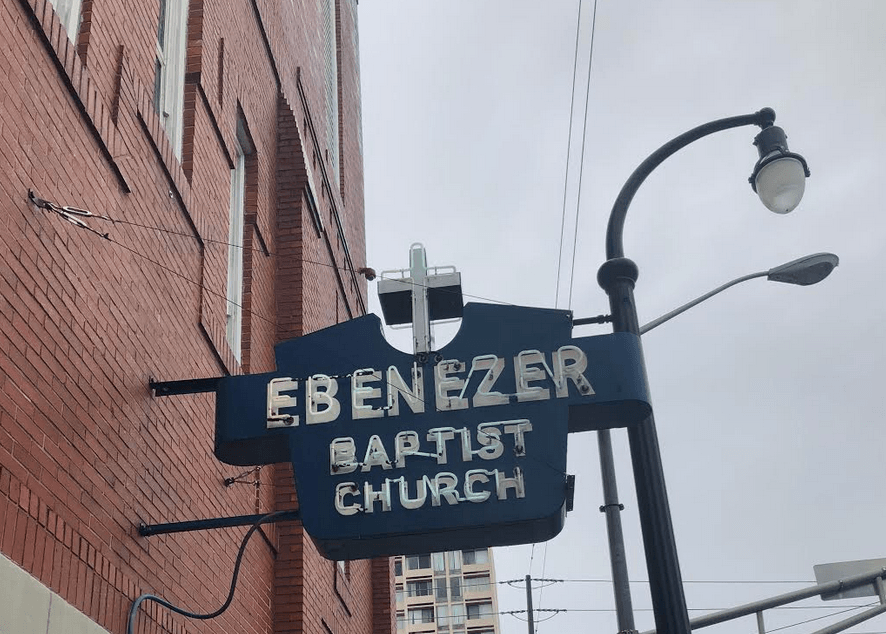 In fact, the three seniors all agreed that while their classroom civil rights class was their favorite in all their GA years, their trips to the south will be the source of vivid memories.

“When you’re there standing in the same spaces, it brings the history to life,” Sara said. “It makes the struggle for civil rights more real.”

“The south has a rich, but complicated history,” Manveer said. “To know something so hopeful and powerful came out of it is impactful.”

After the class and trips, all three girls described seeing the world through a different set of eyes. In fact, Chandler’s goal is to become an attorney.

“There’s a lot of injustice in the world that goes unnoticed or gets minimal attention because it usually involves people of color or poor people,” she said. “We learned about all the ways people are discriminated against and aren’t represented well. The legal system fails many people.”

As is often the case in high school, juniors stick with juniors and seniors stick with other seniors, but on the trip to the deep south, the girls said those boundaries came down.

“There was a lot of hugging, a lot of tears,” Chandler said. “We bound together as a community.”

As chaperones, the girls got to witness the juniors become overwhelmed with emotion, and react in small gestures they could relate to. 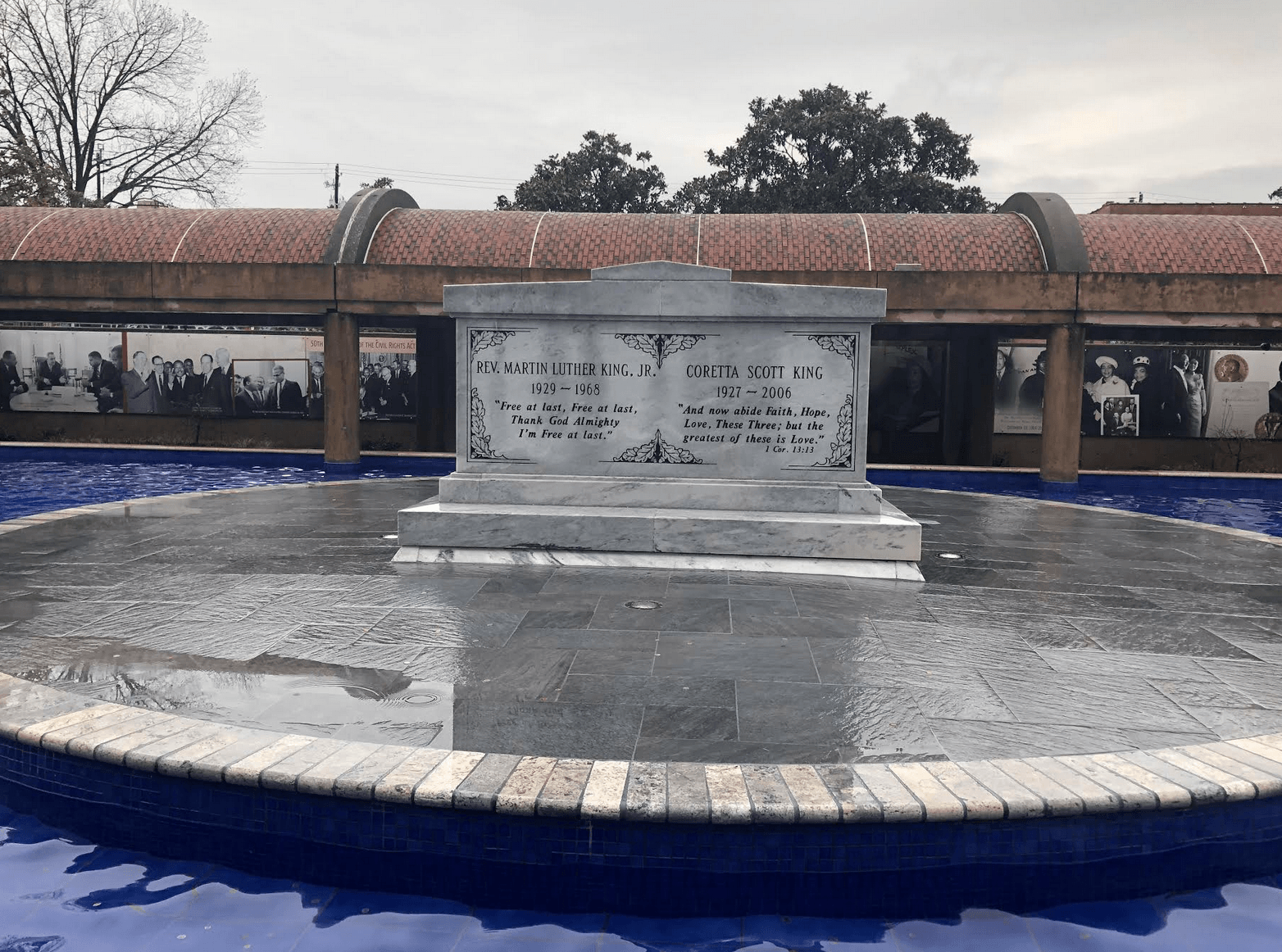 “One boy was so moved by the trip,” Sara said. “In Selma, a bouquet of flowers had fallen over. Three girls tried to put it up, but it fell again. The boy quietly went over when no one was looking and picked it back up and put it back in place.”

Along the way the students got to meet people who made a lasting impression. The coach bus driver, Miss Deborah, for example, got to know the students over the course of five days.

“The last night before going home, we came from a teary, emotional day in Memphis where we saw where Martin Luther King was shot. Miss Deborah made a speech about how much she loves us,” Manveer recalled. “She said she was so glad we were seeing her history.”

The girls said Miss Deborah told them they are the future, they are the change makers. “She said we can’t sit around and do nothing because the older generation still has a certain mentality,” Manveer continued. “We have to rise to the occasion. She emphasized focusing on the #MeToo movement, the Parkland shooting and March for Our Lives.”

At the Equal Justice Initiative, where a memorial to the 4,000 people who were lynched mostly in the deep south, the girls spoke to lawyers about success of the civil rights movement, but also about how much work remains.

“They talked to us about how slavery isn’t over. It has evolved into mass incarceration,” the girls said. “The museum is connected to the lynching memorial.”

The memorial connects slavery, lynching, Jim Crow and mass incarceration. She said the Equal Justice Initiative founder, attorney Brian Stevenson, along with his staff, did the painstaking work of going through records to identify the location of each of lynching that took place. At the memorial, the names of people who were lynched are engraved on eight foot sculptures that hang from the ceiling, symbolic of trees. 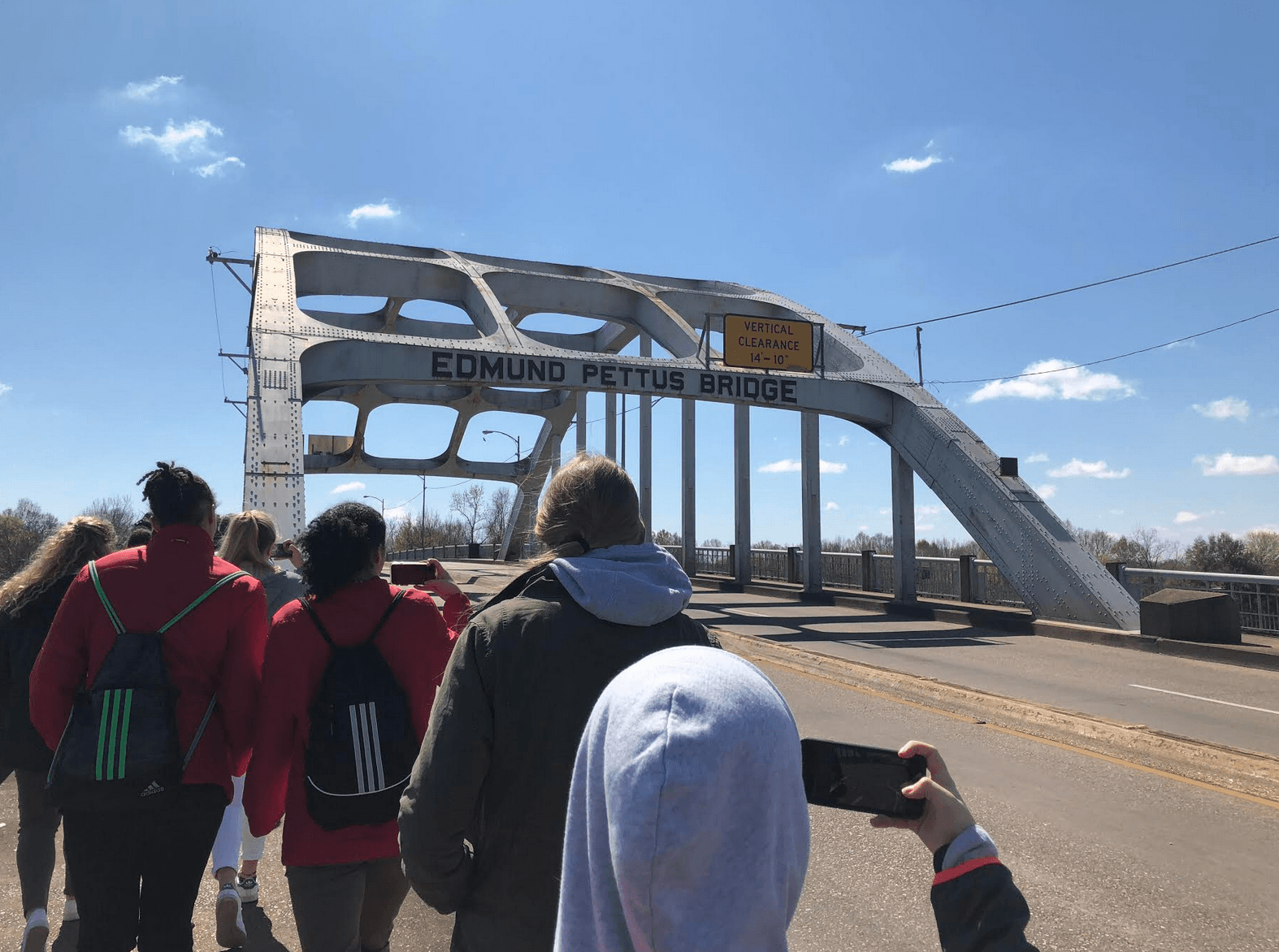 The students met civil rights activist Joanne Bland who was just 11 when she walked over the Edmund Pettus Bridge along with some 600 civil rights marchers heading east out of Selma.

They made it six blocks to the bridge, where state and local lawmen attacked them and drove them back into Selma.

“She told us that at first she was so excited because all the kids were excited,” Manveer said. “On Bloody Sunday, when they were attacked by dogs, horses, rocks and bats, she was so scared of going back again to try again. But she did go back and she was glad to finally be able to walk to Montgomery.”

History teacher Ms. Blunden said the GA girls learned that some of the sticks used to assault the civil rights marchers came from a nearby furniture factory. “They used table legs, and even attached sharp materials so that when they hit the person it was extra painful,” she said.

Manveer said Ms. Bland is often asked if it’s difficult to retell her story every day. “She said, ‘I do it for you kids, so it will never happen again.'”

At the Equal Justice Initiative, the girls met a man named Anthony Ray Hinton, an African American man from Alabama who was held on the state’s death row for 28 years after being wrongly convicted of the murders of two restaurant workers in Birmingham, Alabama in 1985.

Mr. Hinton, who was released seven years ago, shared his story with the students from Greenwich Academy.

“He had some sad parts of his story,” Sara said. “Right after he was released, he said he stepped outside with his niece. It was raining outside the jail. His niece said, ‘Let’s get in the car. You don’t want to get wet,’ and he said, ‘No, I want to feel the raindrops.’ He hadn’t experienced that in almost 30 years.”

Mr. Hinton now lives in freedom, sleeping on a king size bed, but in a fetal position, which carries over from all those years sleeping on a tiny prison cot.

“He told us that for his first year and a half in prison, he remained silent,” Manveer said of Mr. Hinton. “It wasn’t until a man in a cell next to him was crying that he spoke and asked him what was wrong. The man was on death row and was to die the next day.”

Ms. Fernandez Tearte recalled how Mr. Hinton passed the time in prison by inventing stories. “He’d create these stories,” she said. ‘Queen Elizabeth and I would have tea quite frequently,’ she quoted him saying. “He married Hallie Berry. And then someone else came along and he had to tell her.”

Ms. Blunden said her students describe visiting the places where historical events unfolded and hearing personal narratives as powerful. Also, once they’ve had time to reflect on the trip, they are struck by  how recent these events were.

“One student said to me, ‘This is the first time in my life I understand history is real and that I am living history,'” she said.

The girls’ other US History/Civil Rights teacher Savannah Strong said at the Lorraine Motel in Memphis, the girls emerged “totally charged” and that after the trip her class does a unit on mass incarceration.

They study Ghandi and understand the movement around decolonization in India which ended in 1947, and the partitioning of India and Pakistan.

“Martin Luther King draws from Ghandi,” Miss Strong, adding that her class also learns about forms of non non-violent protest, specifically Malcolm X and the Black Panther Movement in the context of the second amendment.

“We read the Black Panther manifesto, which takes direct language of the Declaration of Independence,” Strong said.

Her students learned about how in Oakland, California the Black Panthers attempted to combat police brutality.

“They’d get in their patrol cars and drive around Oakland and when they’d hear about an arrest they would radio other Black Panthers who would show up with their guns,” she said. “They’d stand at a far enough distance so they couldn’t be charged for obstructing an arrest. They made sure the arrest was peaceful.”

Miss Strong said her class is working on a unit on immigration, which like the second amendment, is a timely topic.

“It’s important to have an informed understanding of the history of immigration,” she said, adding that her students study Irish immigration and anti-Catholic narratives. “We looked at US policy and funding to Mexico’s southern border.”

She said that while it has not decreased, there has been an increased pressure on traditional migratory routes.

“Those routes were laid out with help and support, and relative safety. Now they can no longer travel those routes because of fear of being captured by law enforcement. So they’re getting pushed into more and more dangerous migratory routes.”

“Before teaching this class I didn’t like US history,” Miss Strong said. “But I agreed to teach it and realized the reason I didn’t like was I never saw myself reflected in the curriculum.”

Miss Strong said one of her goals is to make sure that each of my students can see themselves reflected in the curriculum.

“For a lot of my African-Americans in class, talking about blacks being subjugated and oppressed, gives more agency in the black experience. They can see themselves reflected in the curriculum.”

“I’m really proud of this class and its legacy,” she said. 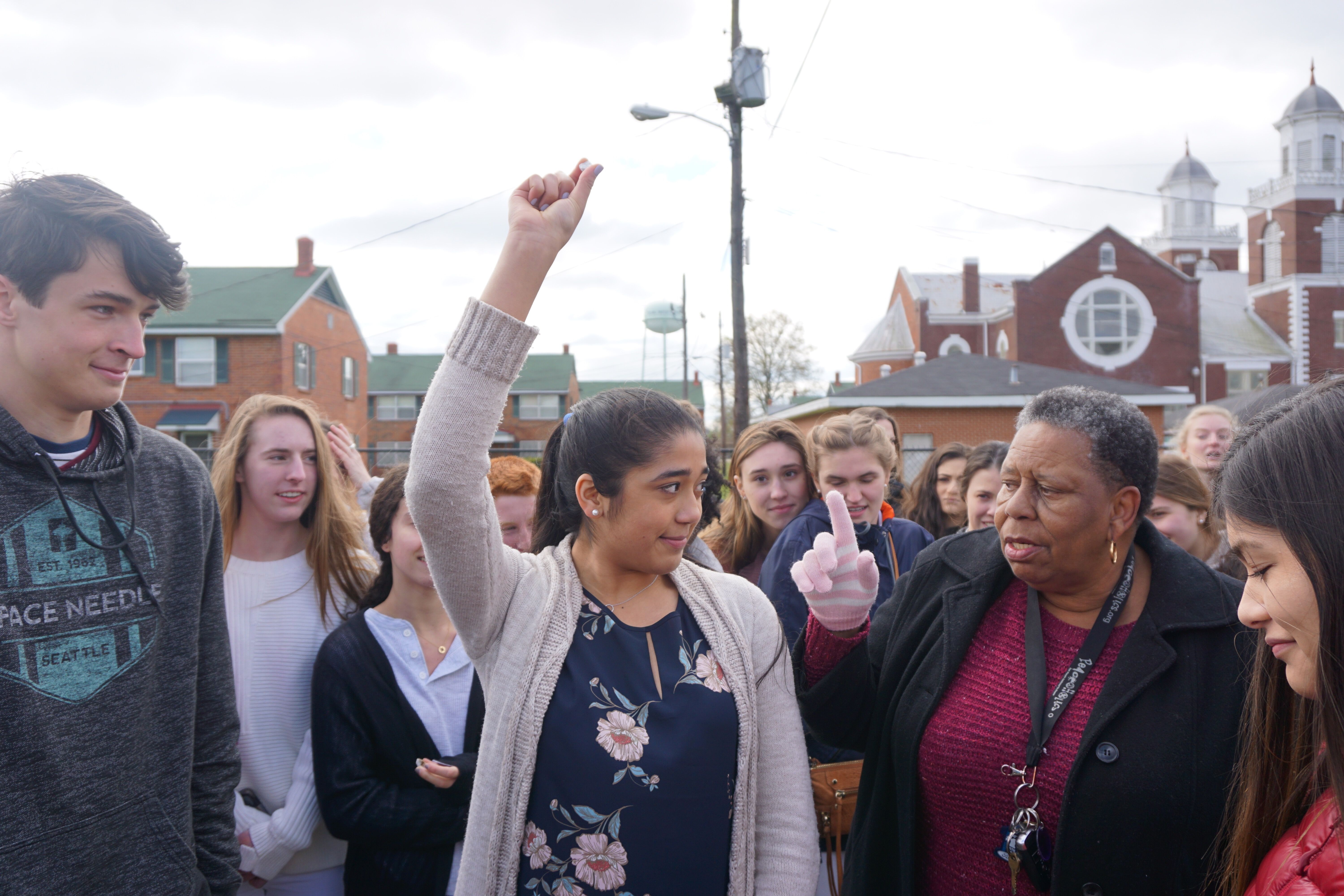 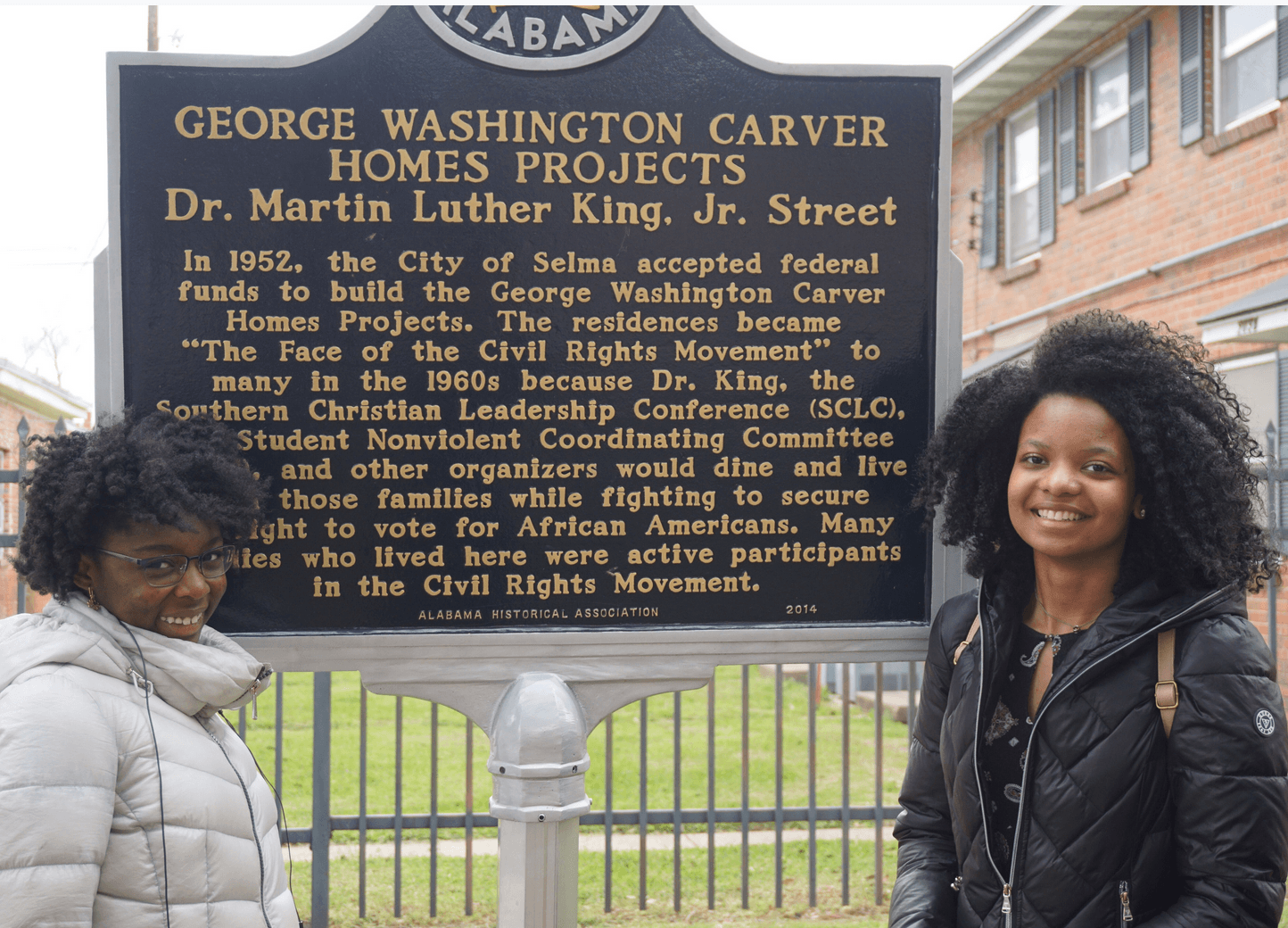 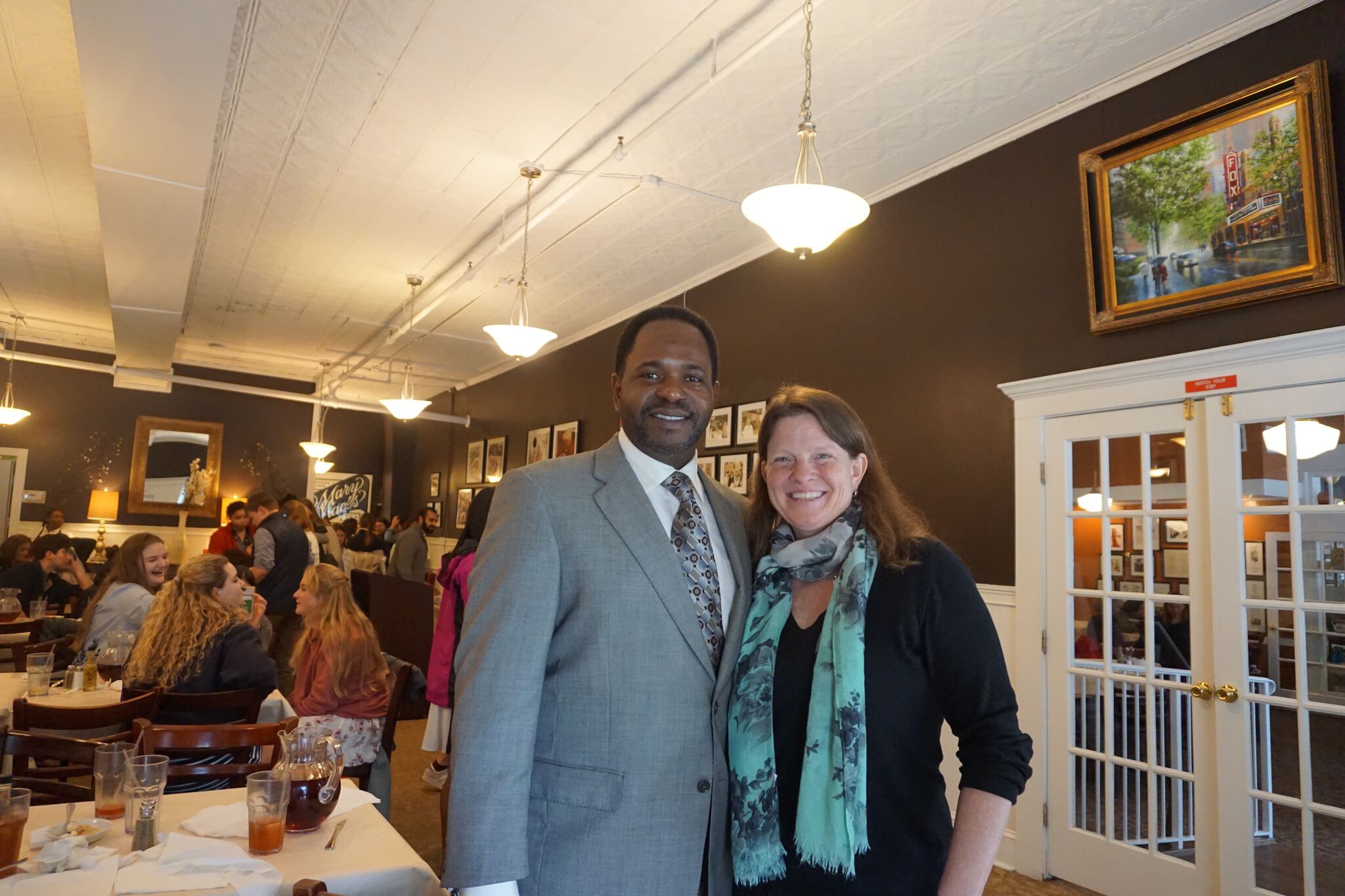 Teacher Connie Blunden with Stephon Ferguson, the only person authorized by the King family to publicly deliver the “I have a dream” speech. He is a non violence practitioner who works at King Center. Contributed photo 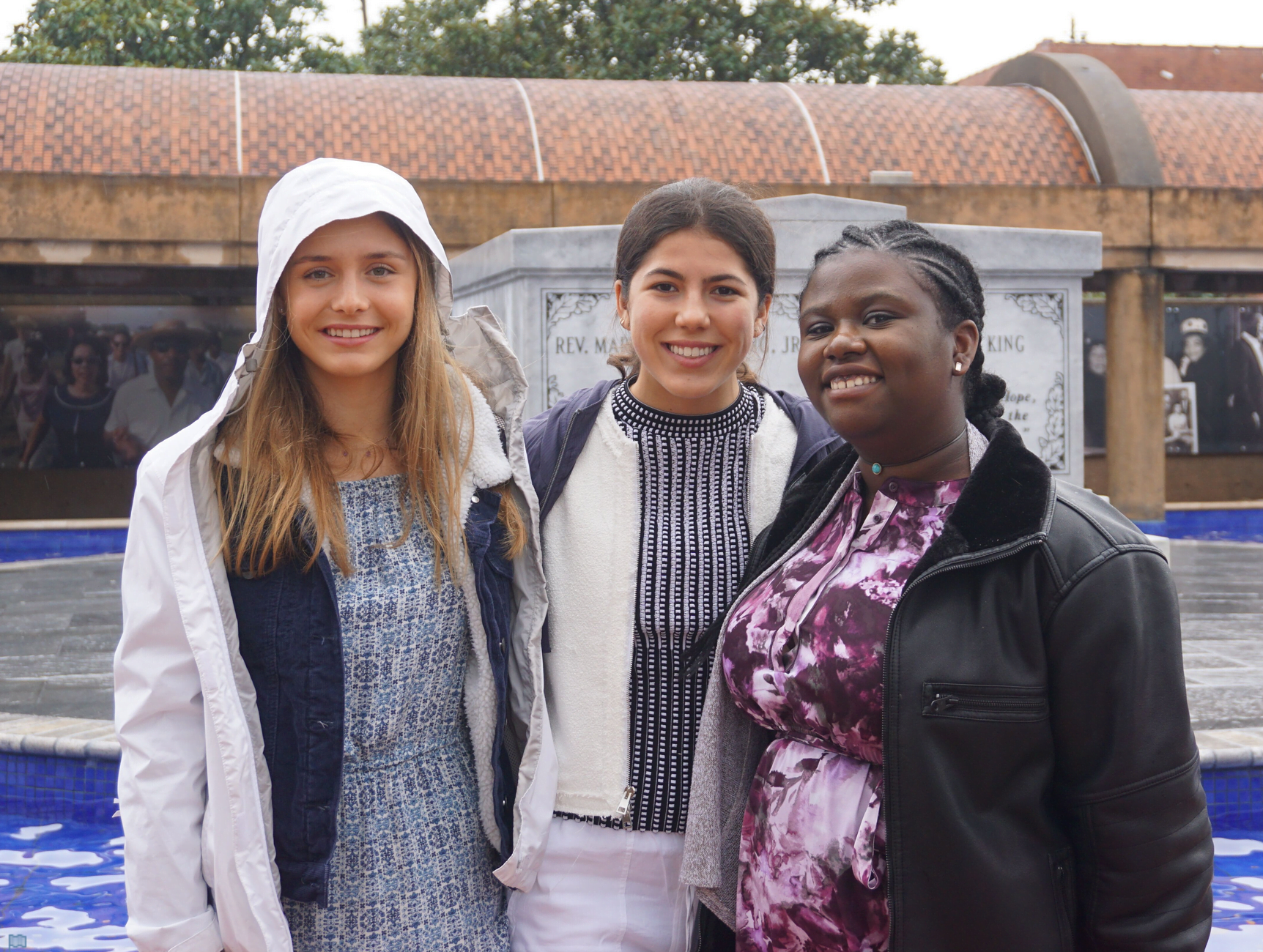 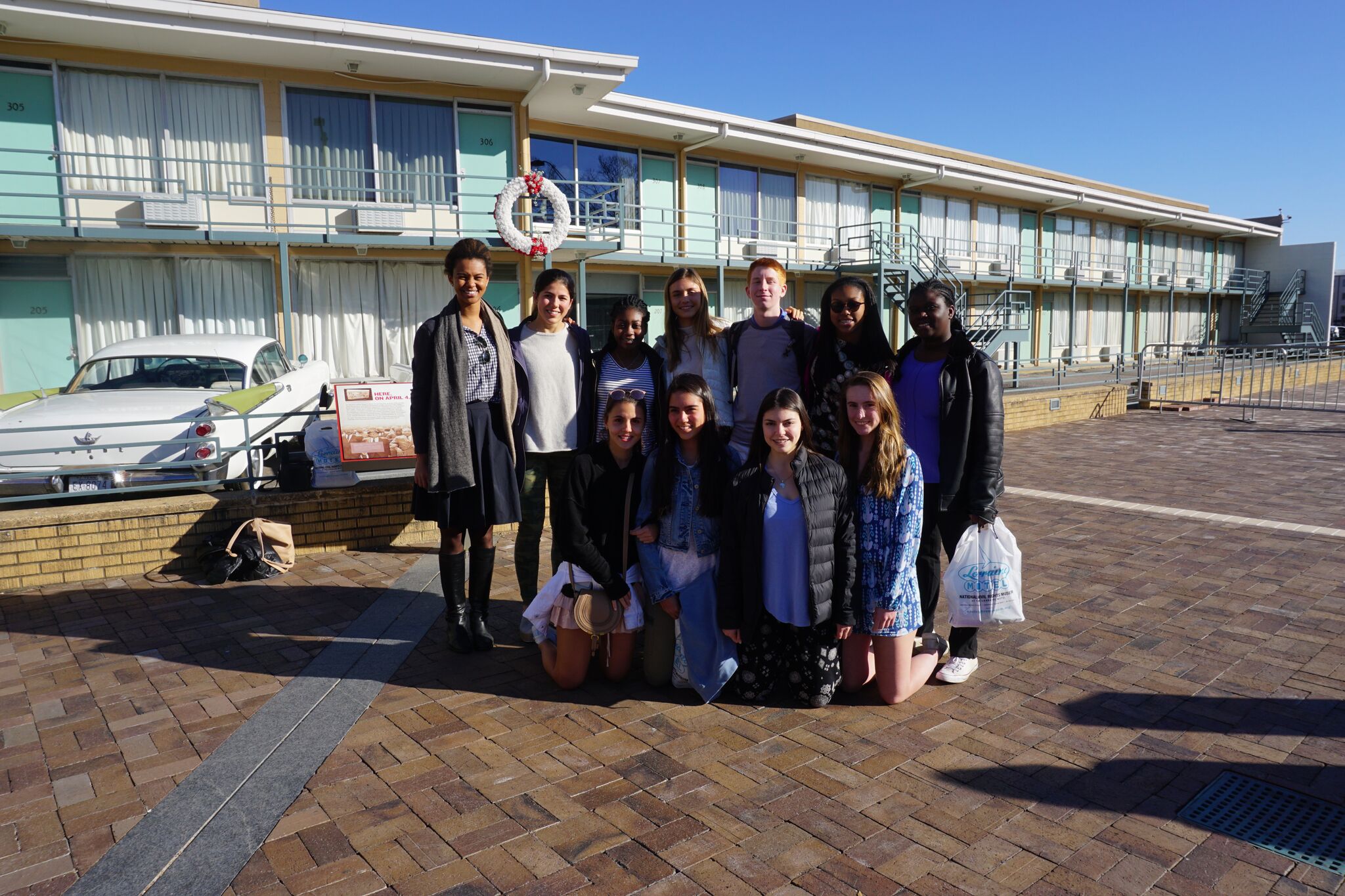 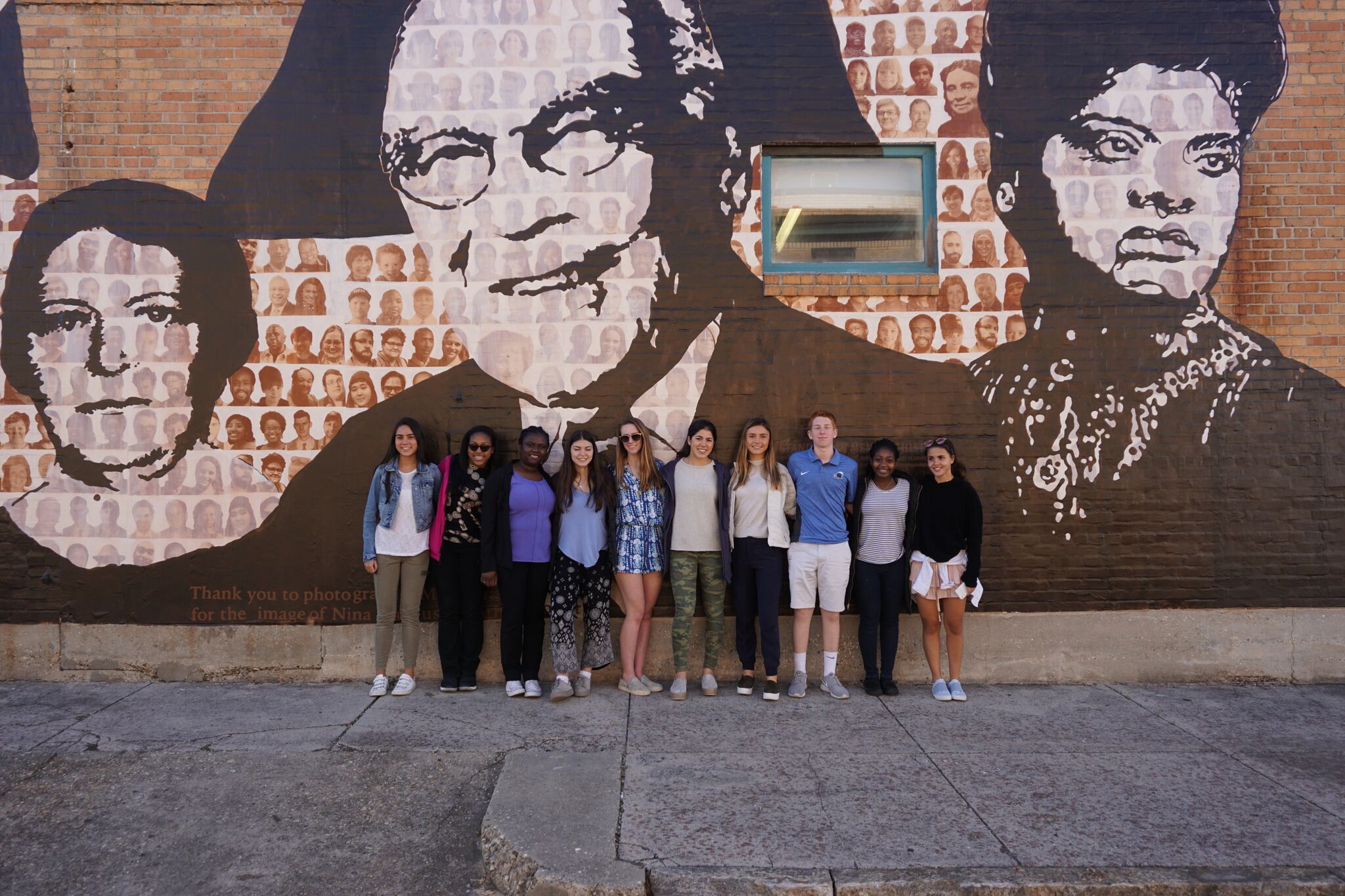 A mural across the street from the Lorraine Motel in Memphis, TN