At Old Greenwich School on Friday, students performed The Wizard of Oz, in what all hope will become an annual tradition.

Before the curtain went up, a special ceremony was conducted to dedicate the stage to a beloved teacher.

As the loss weighed heavy, the entire community attended the service for Mr. Gasparino on Nov. 13, 2017. In order to accommodate the lost day of school, a day was added to the calendar at Old Greenwich School.

On Friday The Frank Gasparino Performing Arts Stage was dedicated. Among the audience were Mr. Gasparino’s father,
sons, wife, and sister.

“It is apropos we kick off our first performance after
dedicating this stage to a man who loved music, his students and this school,” said Principal Jen Bencivengo. “Beginning today – all productions performed in this venue will be on the Frank Gasparino Performing Arts Stage.”

Ms. Bencivengo announced that there will be a plaque on the wall nearest the stage that will say, “The Frank Gasparino Performing Arts Stage.”

Students were drawn to Gasparino, who loved the Beatles and often had their music playing in his classroom. Ms. Bencivengo read a quote from John Lennon:

“You may say I’m a dreamer, but I’m not the only one. I hope someday you’ll join us. And the world will live as one.”

Also, Bencivengo said a scholarship fund has been created by Mr. Gasparino’s father Martin Gasparino for graduating Old Greenwich School alumni who have overcome adversity in any respect to succeed and flourish. “Much like you will see happen as we make our way to Kansas in just a few minutes,” Bencivengo noted. 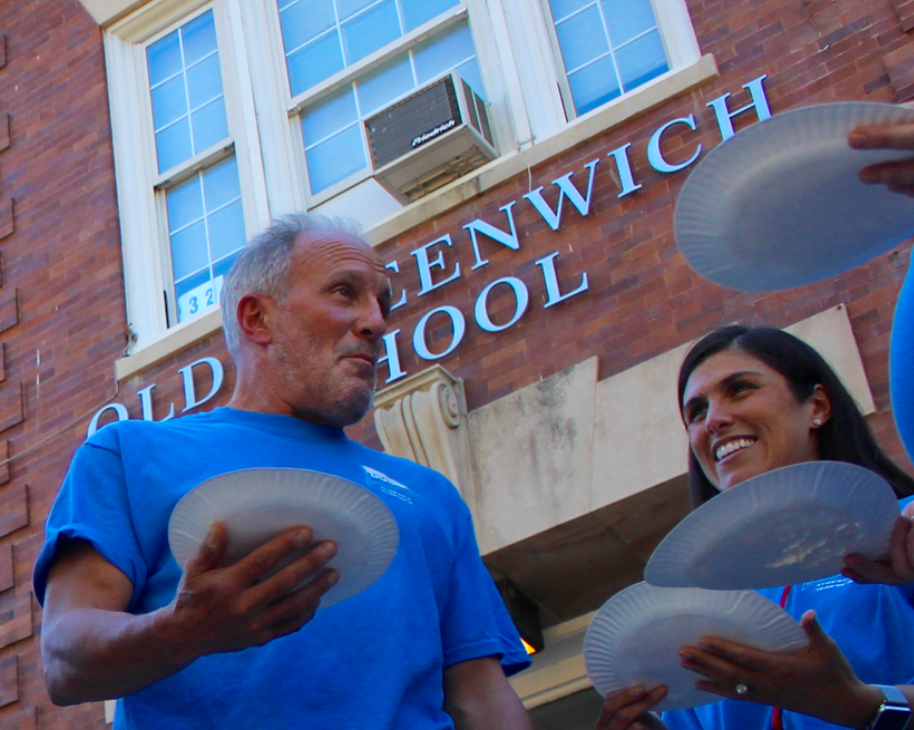 Frank Gasparino prepared to throw a pie, and get pied in a fundraiser on the front steps of Old Greenwich School. Sept. 22, 2017