By Leslie Yager
Grim Reaper Day took place at Greenwich High School on Tuesday with 42 students playing the role of “ghosts” throughout the day.

The program was an effort of the Outreach Club, which sponsors alcohol-free events with a goal of keeping kids safe in Greenwich, but was open to anyone pledging to remain silent the entire school day and forgo the use of their cell phone. 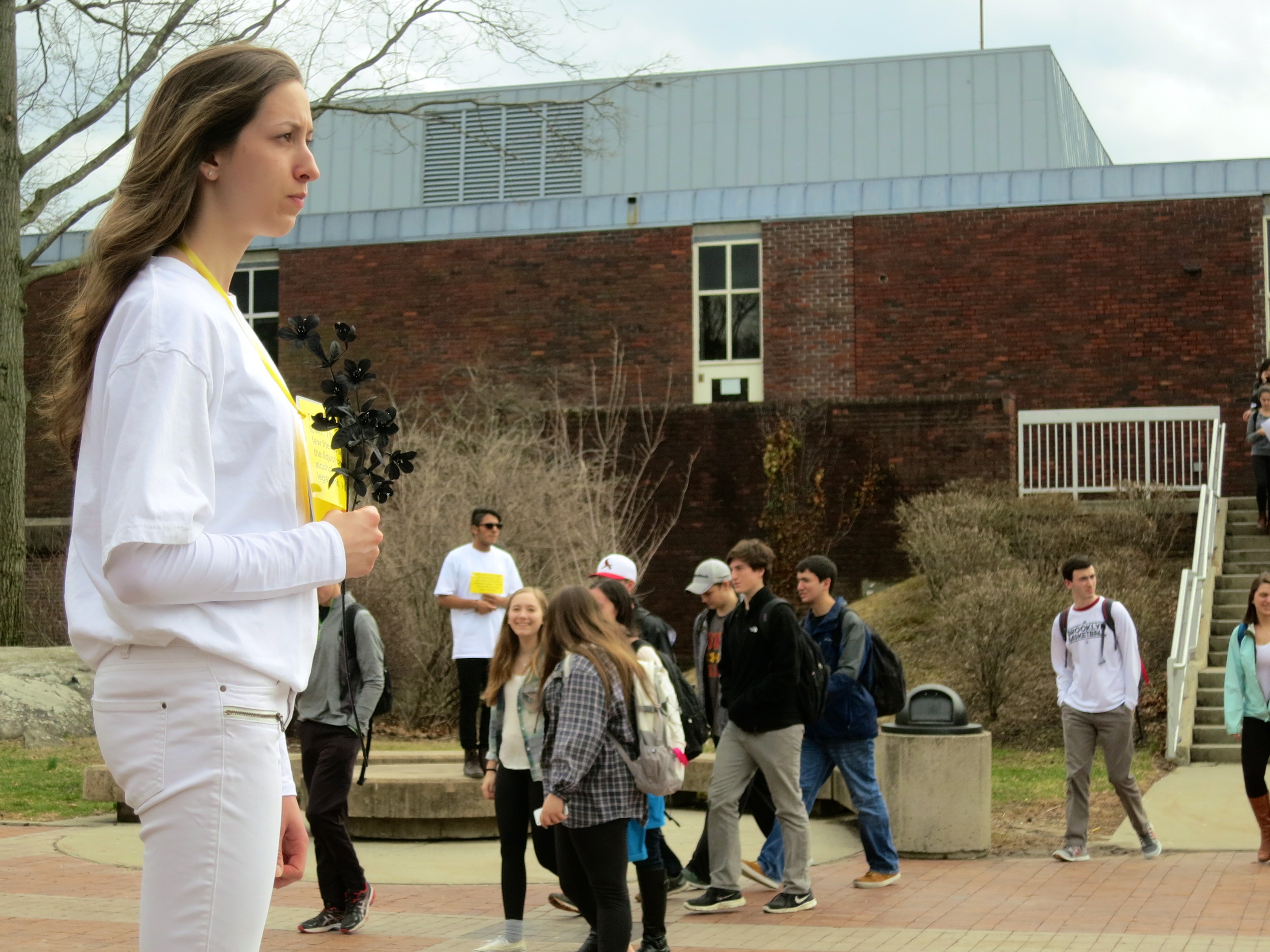 About a half hour before the chaotic school dismissal, a few students were milling around the GHS entrance. Junior, Caysy Livia, said when she realized the placards were indeed true stories of deaths caused by risky behavior she was surprised, but dubious. “It doesn’t really change the way people behave,” Livia said.

Livia’s friend, Leo Lertora, who is a senior at Arch School said he wasn’t familiar with Grim Reaper Day. After Livia explained the premise, Lertora wondered why the event was limited to GHS.

“At Arch, we meet during the school week for boys group therapy and girls group therapy and talk about whatever, but talk a lot especially about drugs, so I don’t know why they only do this at GHS and not at Arch (Arch School) or CLP (Community Learning Program).” 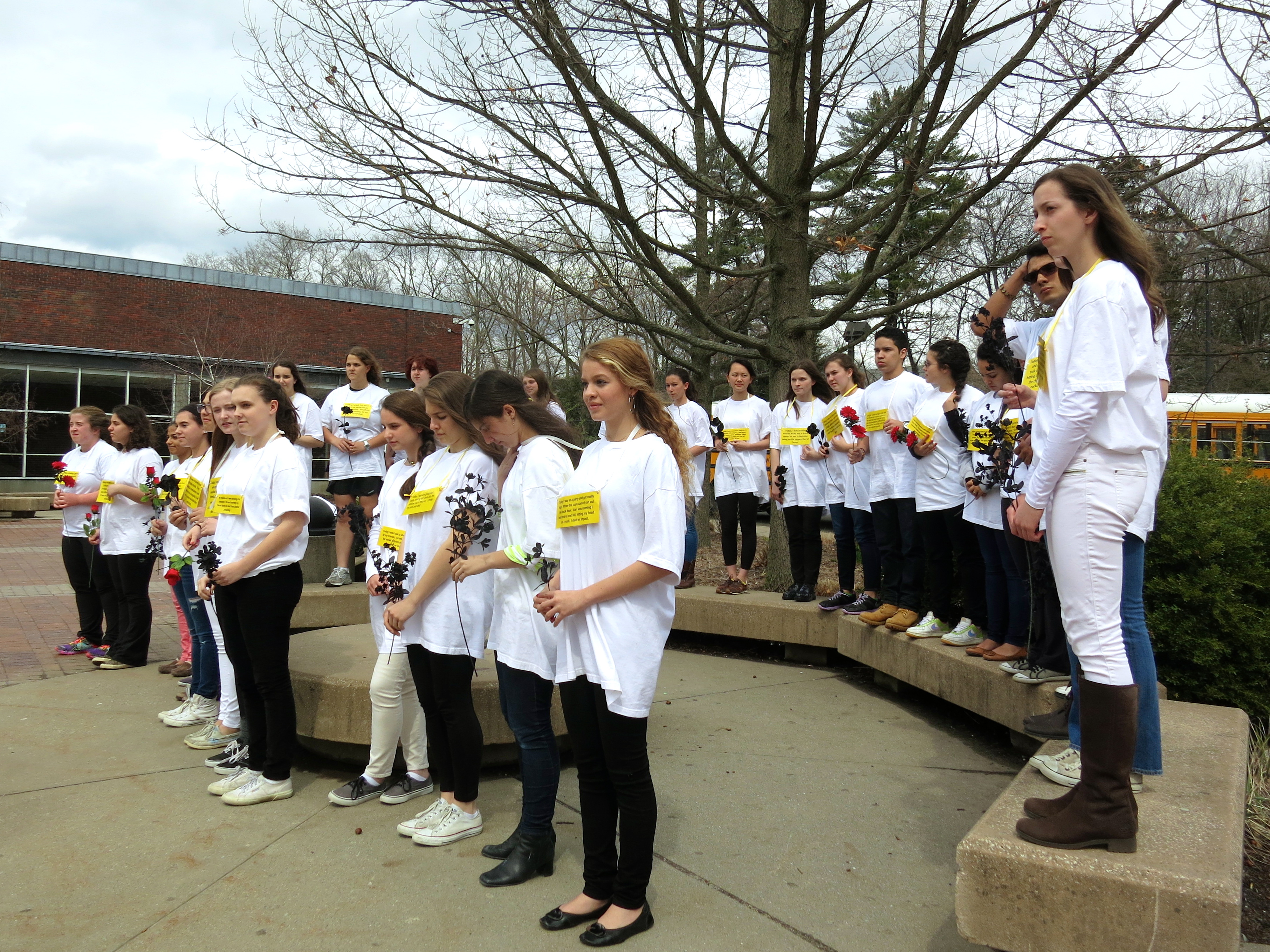 Just before dismissal time the 42 ghosts arranged themselves in silence on the cement tables and benches outside the glass corridor, each in a white t-shirt with large yellow placard printed with the story of their death hanging from a lanyard from their necks.

The stories were not fiction. As 2,600 students streamed past the somber “ghosts,” several shared their reflections with Greenwich Free Press when asked.

Three juniors who stood apart from the “ghosts,” shared their candid impressions of the Grim Reaper concept.

Matt Strati, Jason Capozza and Carlos Fernandez were of like minds.

“This probably won’t change anything,” said Strati. “People still think it won’t happen to them.” 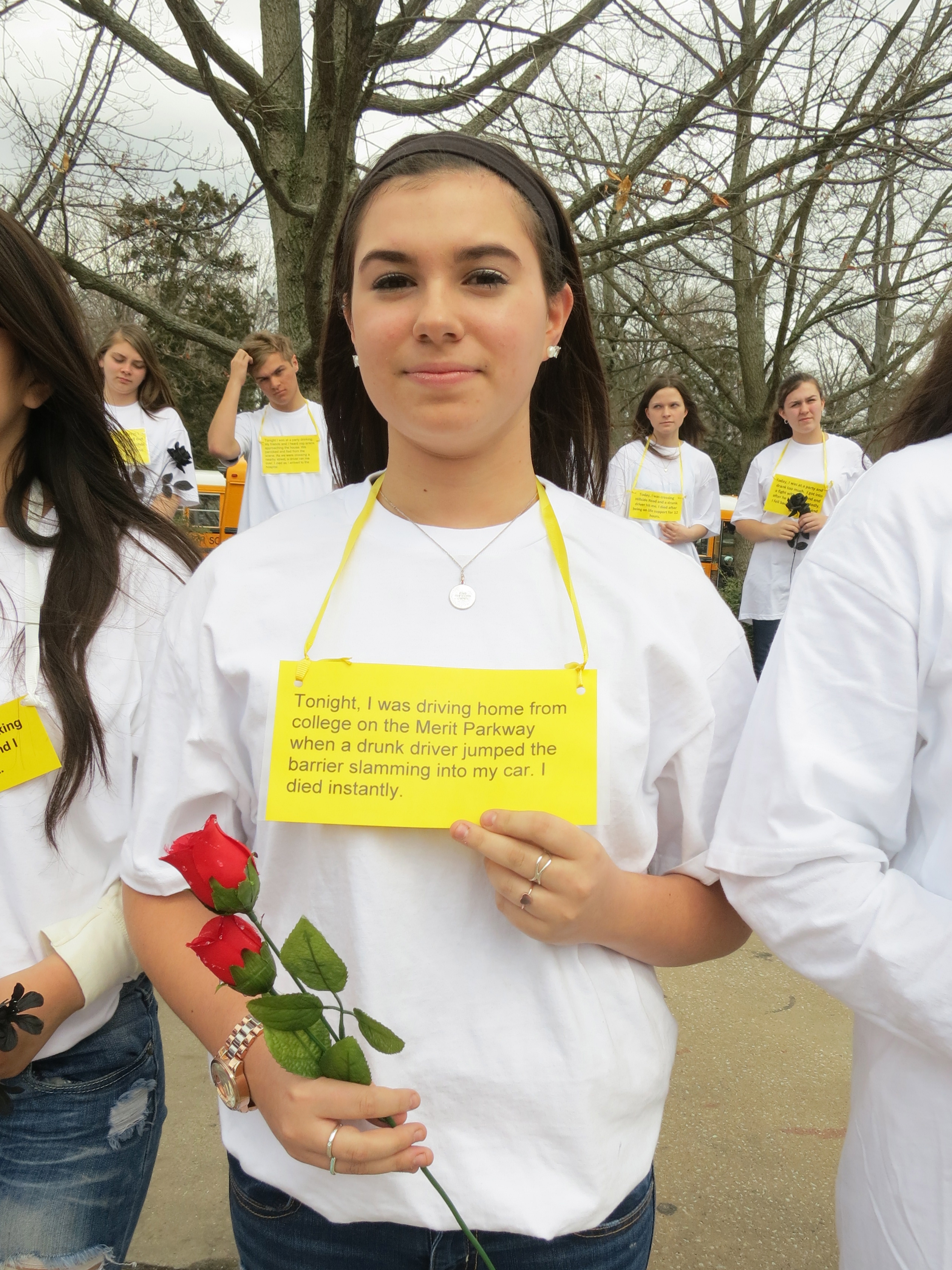 Nodding in agreement, Fernandez said, “Nothing’s going to change. Everyone thinks it won’t happen to them. They’ll still drink and drive because they think they’re invincible.”

“It’s amazing how many people drink and drive,” said Capozza. “They should do this in middle schools because nothing is going to change here. Hopefully it will, but probably not.” 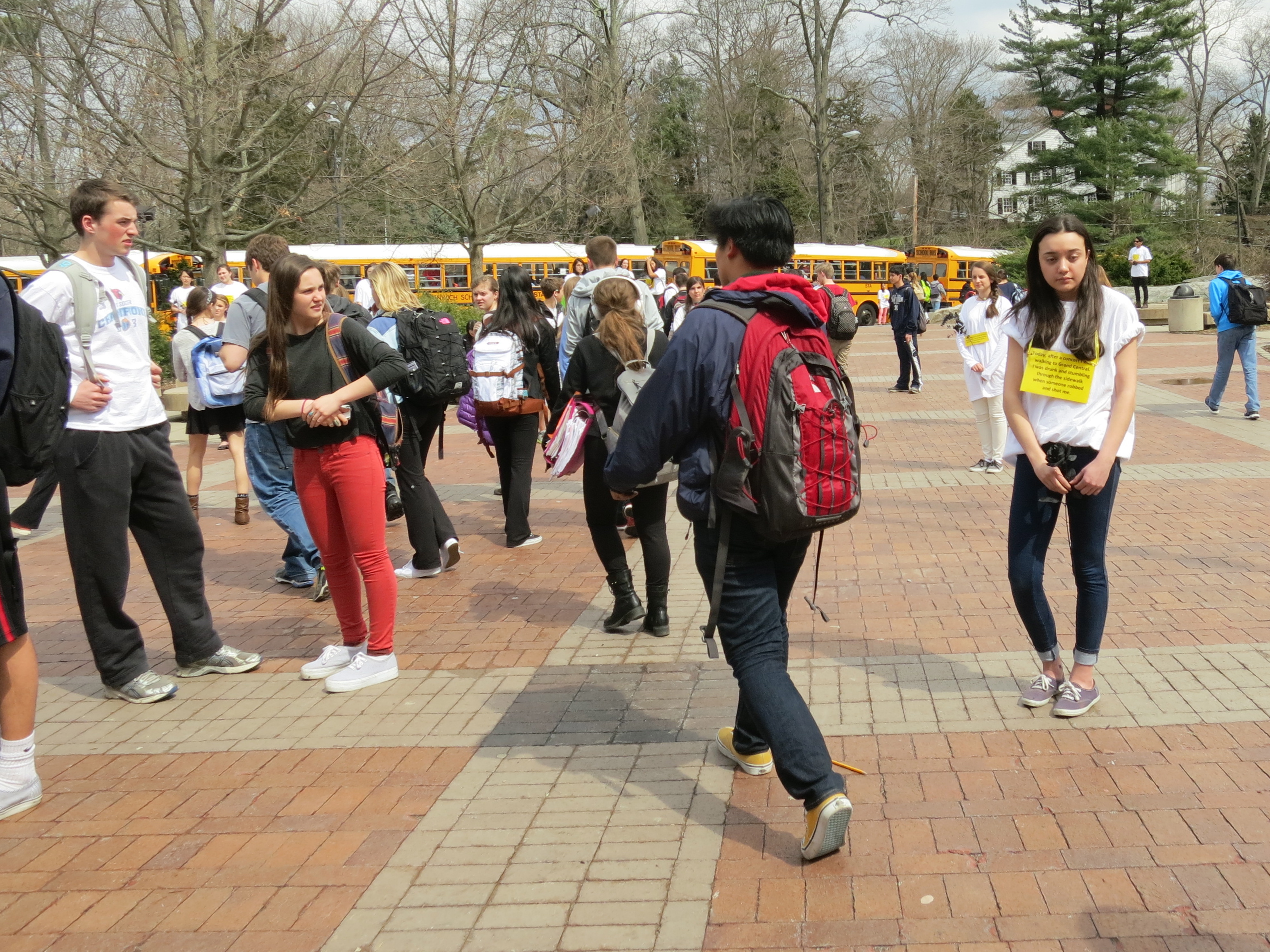 “It could make a difference,” said Hyden.

“It caught people’s attention,” Rivera said. “It wasn’t like just another poster.”

“People will forget by the weekend,” Pastore said. “They really should have done it on a Friday.” 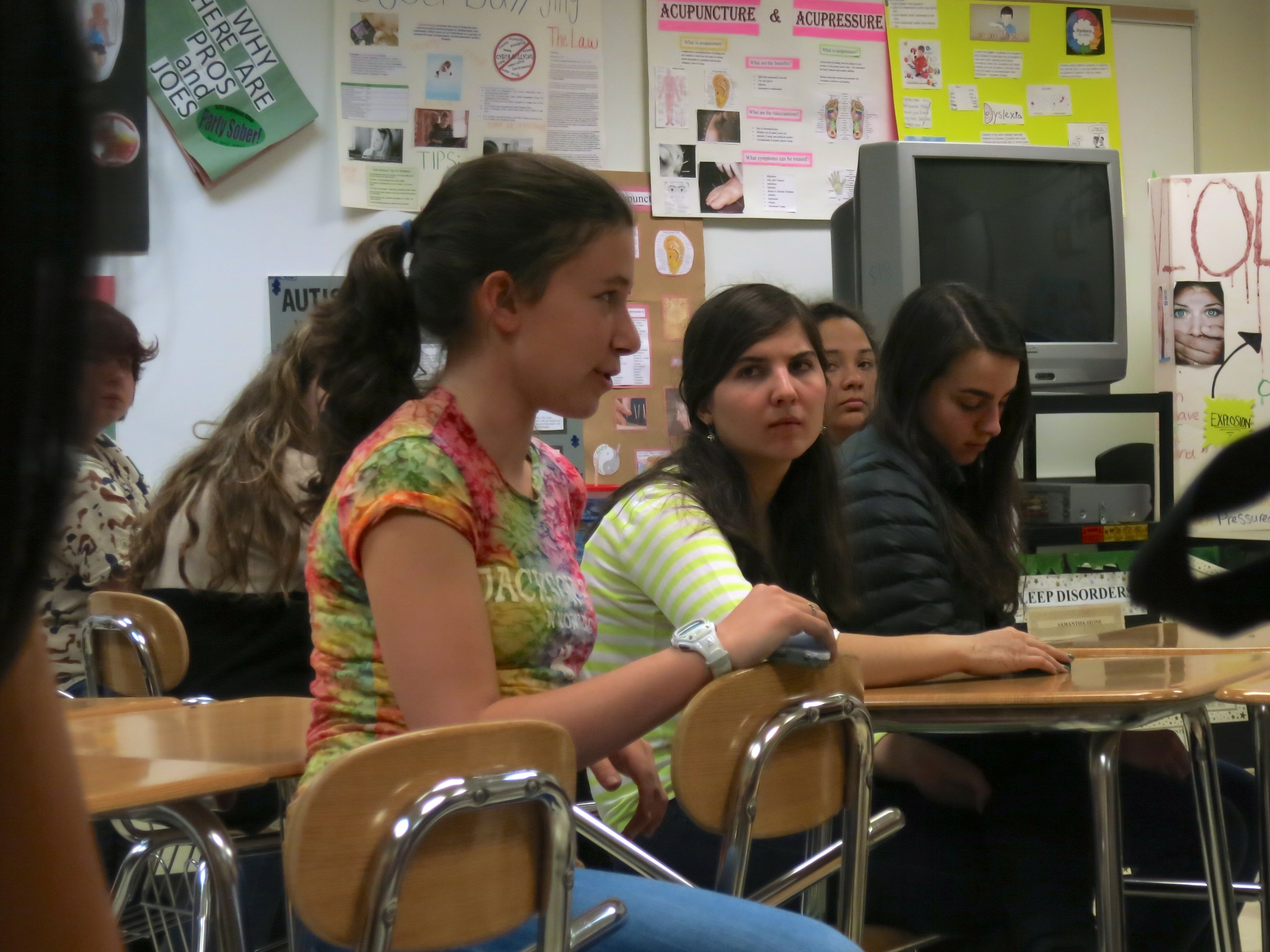 After dismissal, the 42 ghosts headed back to the classroom for a debrief with Health and Wellness teacher Kathy Steiner and Dept. Chair Lil Perone.

Junior Grace Barber joined the de-brief even though she had not been a ghost. Her friend Millie Donnely had been a ghost. “It was very hard to imagine world without Millie,” said Donnely.

Millie Donnely, GHS junior, wore a placard that stated, “Today my friends and I went to a music festival. We were all drunk and I passed out in the middle of a huge crowd. I was trampled to death.”

Another ghost attributed behavior patterns to peer pressure. “Peer influence can be the reason you start drinking. But it can also be the reason why people stop.”

“I did this for me,” said Rebecca Powell, a sophomore. “I am not invincible. The silence made me stop and think all day.”

Another non-ghost said that she sat in the student center with four “ghosts” at lunch and reported that a friend passing by asked her, ‘Why you sitting alone?’ which she observed was symbolic of what happens to those who lose loved ones.

The consensus during the de-brief was that reactions had been polarized, with many students going out of their way to avoid the “ghosts.” Others were reportedly visibly moved. 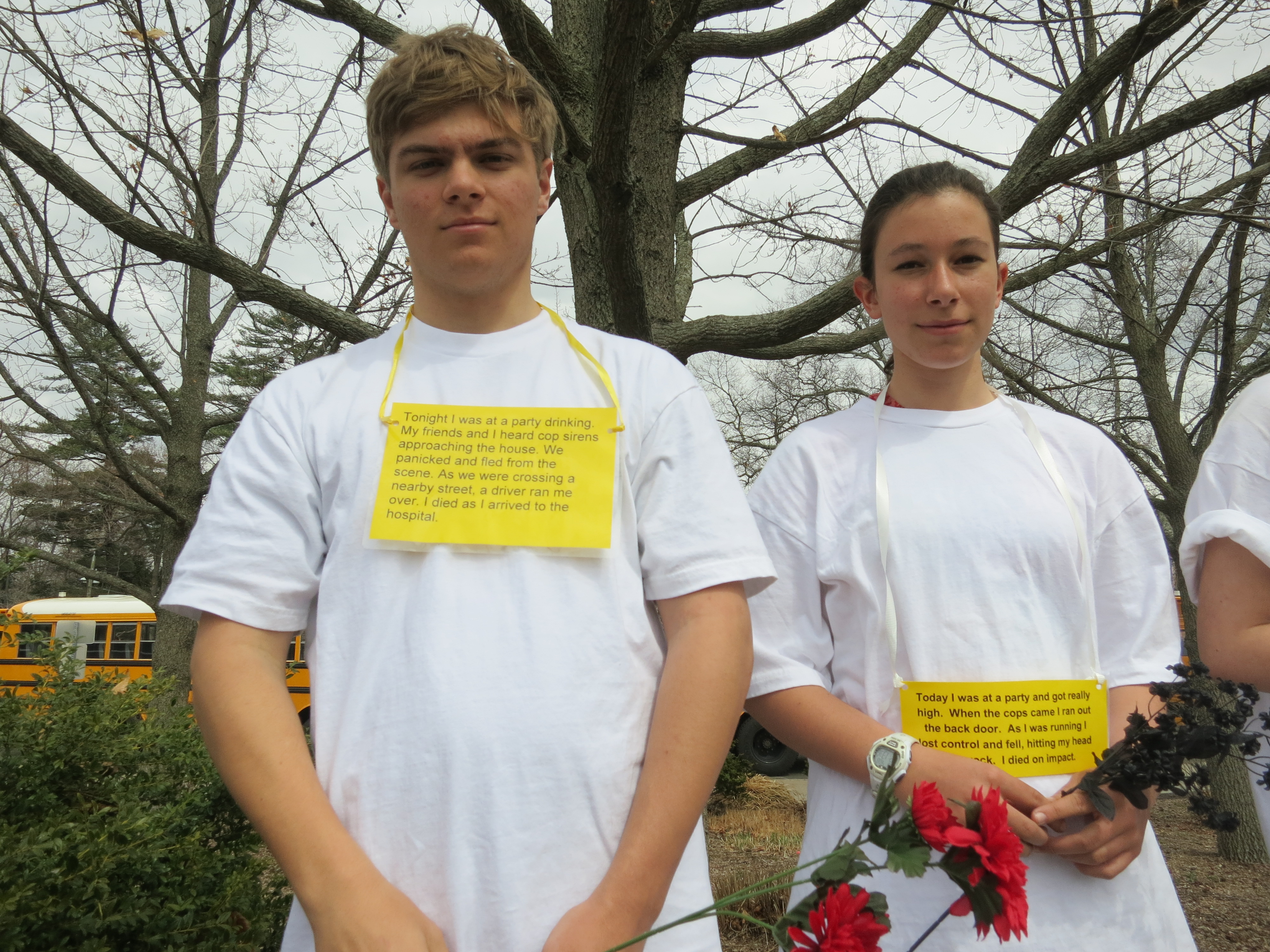 When Grim Reaper Day was originally conceptualized at GHS the program involved someone dressed in black as the Grim Reaper, arriving at classrooms in session and “pulling” a student out of the room, and reporting back how they died. Students in the de-brief agreed to make the goal of restoring that aspect of the program, which they said had been “watered down” by Dr. Winters after complaints of discomfort from parents whose teens had died soon after graduating GHS.

One ghost described her fellow students approaching her with smiles, but subsequently changing their expressions after reading the story of her ghost’s death. “I could see them considering whether smoking is a good decision,” she said.

Contemplating the polarized reactions on the part of both students and teachers — some dismissive, some sympathetic — the ghosts hypothesized that maybe only be those who have personally experienced these situations displayed a sense of seriousness.

What are your thoughts about Grim Reaper Day? Feel free to tell us in the comments or email the editor.