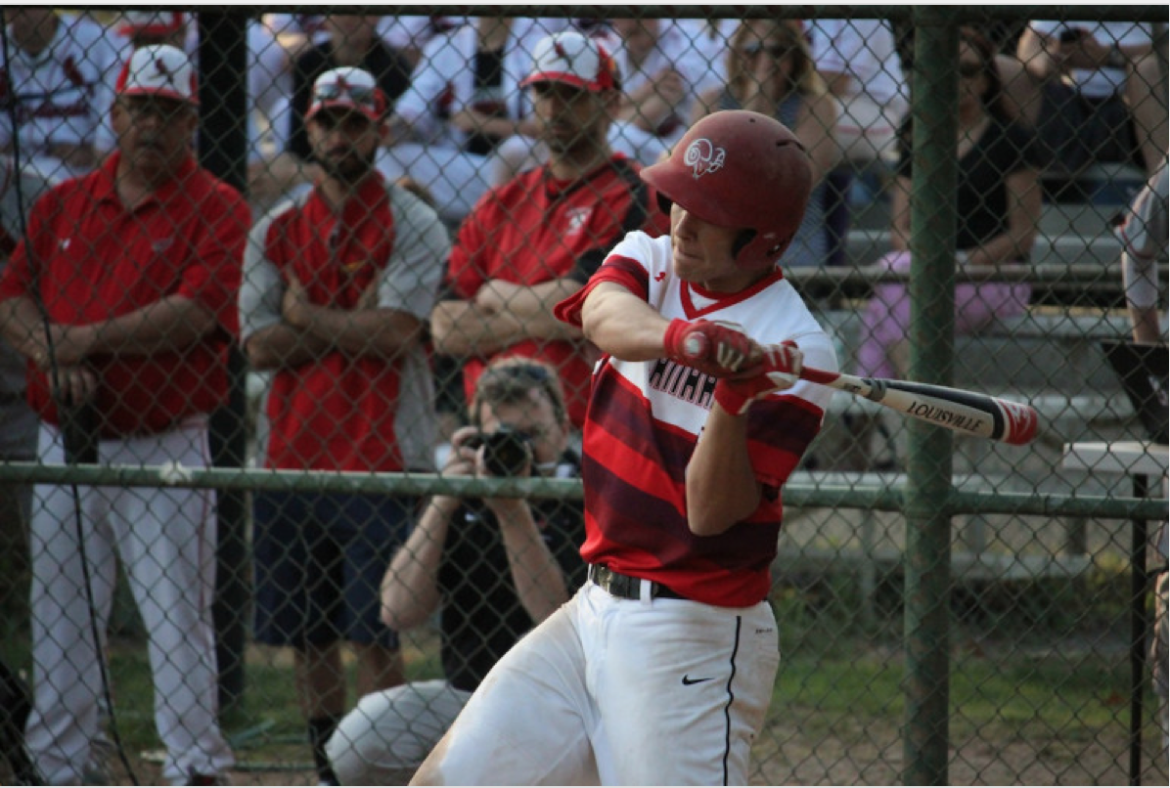 New Canaan sophomore Robbie Jones began the game on the mound for his first start there in his high school career. He finished the game watching the ball sail off his bat and over the right field wall to cap off an extra inning, come-from-behind, 8-7 Rams victory over the Greenwich Cardinals.

“In the beginning of the at-bat, I can’t lie, I was a little nervous being in that spot,” Jones told NewCanaanite.com. “But I was still really confident. When I hit that ball I was so pumped.”

Also pumped were Jones’ teammates, who mobbed the hero at home plate.

“I couldn’t believe it,” said Jones. “It was insane. And when I rounded third base and I saw my coach give me a high five, seeing my teammates fired up—that just really meant a lot.” 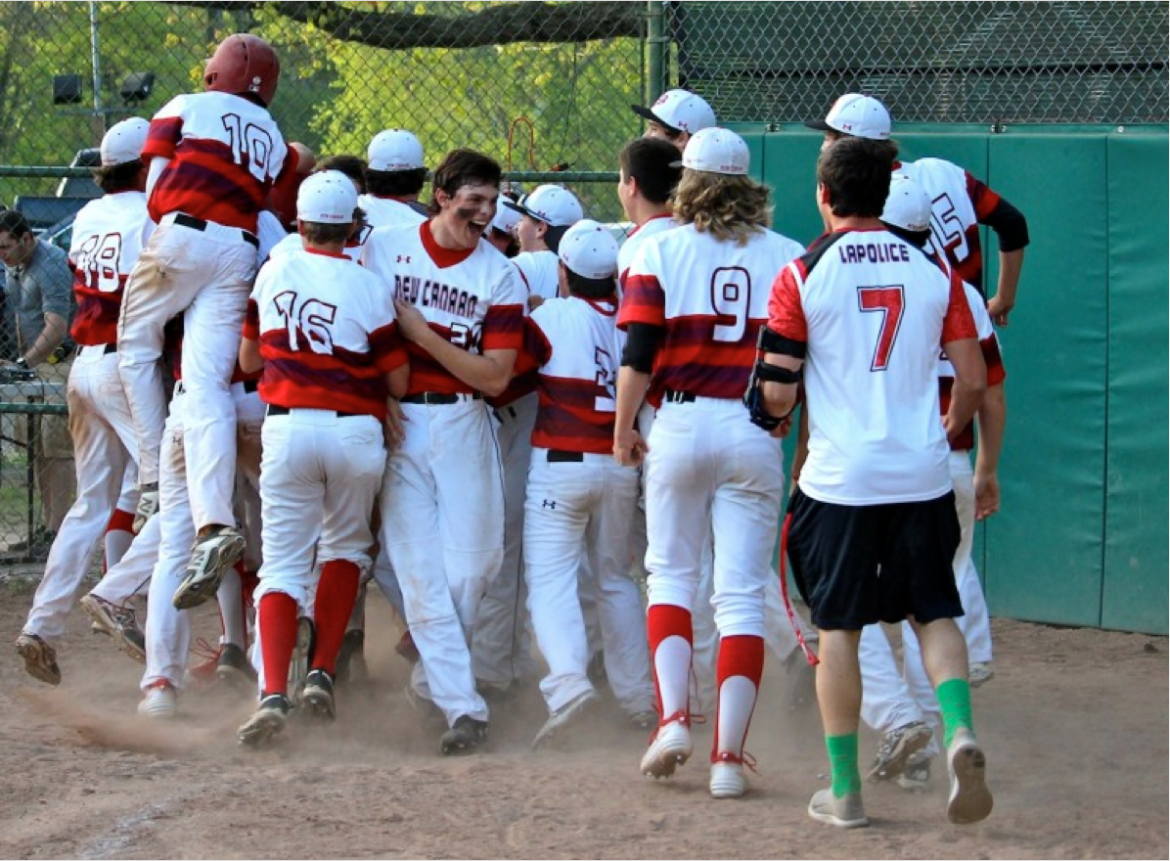 The Rams mob Robbie Jones at home after the New Canaan sophomore hit a walk-off home run to beat Greenwich 8-7 at Mead Park on May 11, 2015. Credit: Terry Dinan

The game didn’t get off to the start Jones and New Canaan were hoping for. After Greenwich’s first batter, second baseman Alex Loparco got on base because of the benefit of an infield error, Jones was immediately put into the stretch. Jones was able to strike out the next two batters, Greenwich first baseman Kevin Woodring drove Loparco home on an RBI double for an early 1-0 lead. Greenwich added two runs in the top of the third, aided by another New Canaan defensive miscue, to make it 3-0 Cardinals.

Meanwhile, Greenwich starter Michael Genaro was sailing along, allowing only two singles over the first four innings. Mixing speeds and hitting spots, the Cardinals’ lefty kept New Canaan off-balance for most of the contest.

The Rams kept things close as steady reliever Clark Newlove came in to pitch in the fifth. And while three runners got on base for Greenwich, two of them were negated on separate steal attempts when senior co-captain Zach Smith gunned down both at third, giving the Rams some momentum as the game moved to the bottom half of the inning.

The Rams broke Genaro’s shutout with a run in the fifth to narrow their deficit to 3-1. Newlove reached on a two-out walk and advanced to third on a David Giusti single. Jones then followed with an RBI single to drive Newlove home.

In the top of the seventh, Greenwich added what looked to be some simple insurance runs. Colin Kelly led off with a walk then stole second. Anthony Ferraro then delivered a pinch-hit single to score Kelly and extend the Greenwich lead to 4-1. New Canaan’s Matt Burger was able to gun down a potential scorer in Woodring with the infield drawn in, but Newlove walked the next two batters for another Cardinal run to make it 5-1 heading into the bottom of the seventh.

With a four-run lead and Genaro showing little sign of wear, Greenwich coach Phil Tarantino sent out his horse to finish the complete game. And though little offense was mustered through the first six innings, New Canaan finally broke through.

Matt Burger got the inning going with a leadoff double that one-hopped the left field fence. Recent JV callup Mike Pelli followed that with a productive groundout, advancing to Burger to third. Next up was Giusti, who beat out a groundball to first for an infield RBI single, making it 5-2. Robbie Jones followed that with his second consecutive single, this time with a sharp grounder past the third baseman and on into left field. Third baseman Kyle Levasseur kept the train moving as he lined a single to right, scoring Giusti and hustling to get to second on the right fielder’s throw home to cut the Greenwich lead to 5-3.

With runners on second and third and still one out, Smith knocked Genaro out of the game after roping a single to center, plating both Jones and Levasseur. Smith also moved to second on the ensuing throw home, putting himself in scoring position as the potential winning run.

Greenwich Reliever Connor Langan was brought in by Tarantino, in what was still a very big spot—one out and winning run on second. But after an automatic intentional walk to New Canaan shortstop Brandon Abate, Langan got the double play he needed on a groundball from Kane Curtin, shortstop-to-second-to-first, and send the game on into extra innings.

After using three pitchers already (Jones, Newlove, and Jack Havard for the final out in the 7th), and on the heels of the news that co-captain Alex LaPolice is done for the season (at least pitching-wise) with a tear in the ulnar collateral ligament of his elbow, New Canaan coach Mitch Hoffman called upon the fresh-faced Pelli in a big spot.

Greenwich’s momentum gained from that inning-ending double play continued into the eighth. Loparco outlasted Pelli as on the thirteenth pitch of the at-bat he drove it to deep centerfield, landing at the base of tree, 365 feet from home plate, for a leadoff triple.

The next batter, Kelly, drove him in with a sacrifice fly to left as Greenwich regained the lead, 6-5. Hoffman then called upon reliever Thomas Williams, who walked the first batter he faced, centerfielder Devin McGrath. McGrath stole both second and third before his teammate Woodring plated him on a sac fly to center increasing the lead to 7-5.

Langan was back on the hill for Greenwich in the bottom of the eighth, and the aforementioned Williams was up first for the Rams. Williams got the inning going by lining a single to center, which was followed by a grounder through the hole into right by Burger. Thomas Reynolds drew a full count walk to load the bases with nobody out for New Canaan.

Langan got another crucial double play as David Giusti grounded into a 4-6-3 that scored Williams to make it 7-6 Greenwich, moving Burger to third and leaving the game hanging in the very capable hands and bat of Robbie Jones.

Down to his last strike, Jones crushed a 1-2 high fastball from Langan over the right field fence for a the most dramatic win of the season for the Rams who improved to 12-3 overall and 11-2 in the FCIAC. The loss dropped Greenwich’s overall record to 7-8  and 6-7 in conference play.

“There’s a lot of positives,” Hoffman told NewCanaanite.com. “But what we just talked to them is we have positive goals. The positive side is that we did win the game. A sophomore started it, [and] a sophomore ended it in Robbie Jones. But he even says, ‘Guys, this is not what we’re all about.’ It’s definitely a positive to see ourselves fight for this and do it. We used the whole bench. But when we want to go after our goals, it’s going to be very hard [for us] to play like that the entire season.”

It’s a tone-setting win for New Canaan as they continue on what’s a very daunting final five games of the regular season: at Wilton, home vs. Trinity Catholic, home vs. (undefeated) Darien, home vs. St. Joe’s and concluding at Stamford.

“There’s no let downs,” said Hoffman. “And that’s the big difference between this and any other sport in the entire FCIAC—there’s no weak guys.”