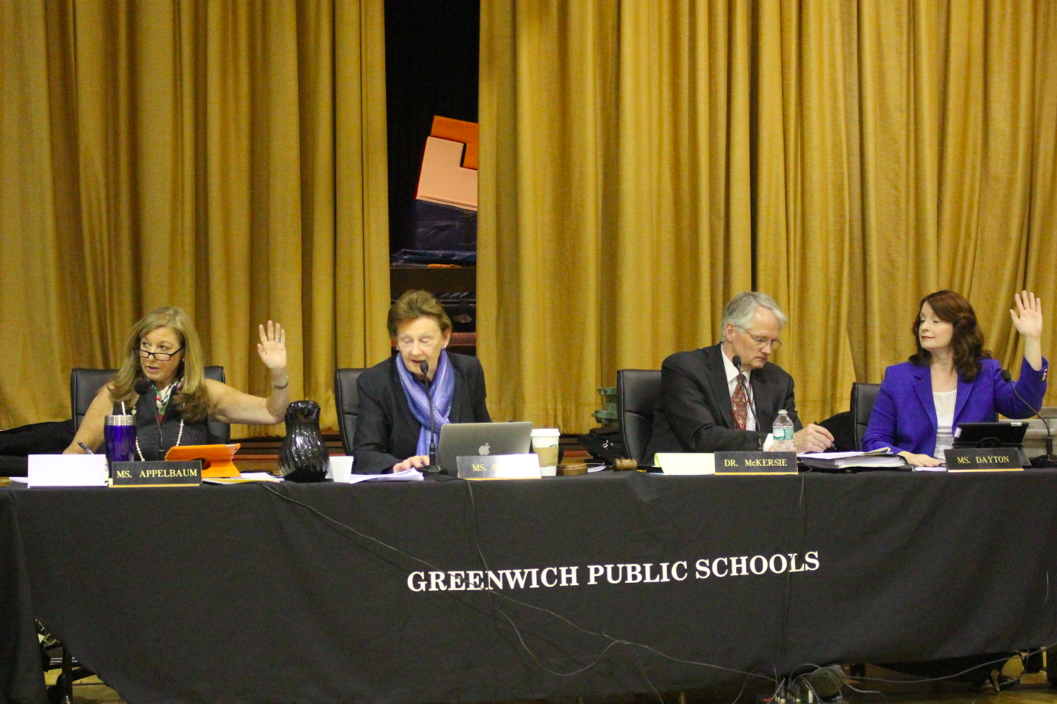 At Thursday’s Board of Education meeting, the topic of an additional, advanced section of GHS freshman English-Social studies was discussed at length.

There were two schools of thought in the debate over piloting a 3rd section “113A” in addition to 112 and 113.

GHS senior, Andrew Ma, who was recognized as an Intel science winner earlier in the meeting, spoke during the public hearing to say he was strongly in favor of 113A.

“There are many students who are really passionate and very advanced in their freshman year of high school,” Ma said. “I know one student who got perfect SAT scores on the verbal section while still in middle school, adding that a student like that, as well as himself, would have benefited from a class like 113A.

Unlike Ma, most other speakers ranged from dubious to having minor reservations, including GHS student government leaders, parents, PTA leaders and the GEA president.

And, still, the Board of Ed voted six to 1 in favor of a one-year 113A honors pilot. 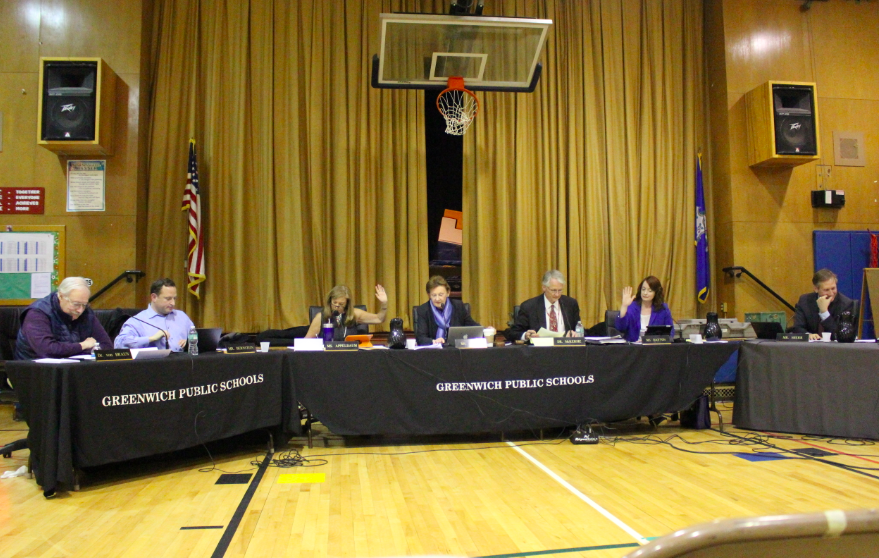 In order to identify 15% of next year’s 9th graders to enroll in 113A, Chris Winters said GHS had a team of 3 English and 3 Social Studies teachers who had been working about 6 weeks to come up with an essay test to mimic work students would do in the course.

“It’s a documents-based approach where they would be reviewing two or three documents and writing a response,” Winters said. “Ultimately it will be the middle school principals who pull this off. No one would be denied the opportunity to take the test for 113A.”

Asked by Mrs. Dayton if diversity would be a factor in identifying students, Winters said he hadn’t anticipated that question. “The score is going to determine who is in the course. The background, economic status, would not be taken into consideration.”

Dr. Winters said the 15% cutoff reflected the new course being taught as a pilot program, and expected 100 to 125 students would enroll, or roughly the same number that enrolls in sophomore year AP US History. He said he anticipated a natural break between the top 15% of scorers and the remainder.

Winters indicated he was prepared to send out letters to all parents about the 113A opportunity and could complete testing and identifying current 8th graders within 2 weeks.  “I think we can get this done,” the headmaster said.

Mrs. O’Neill asked if there would be a disadvantage to students in 113 when applying for AP US History for sophomore year, to which Mr. Winters replied, “No, but their own perception of themself as a learner may be at a disadvantage.”

Superintendent McKersie said the district’s goal is to have as many students in AP classes as possible.”We’re in the top 3-4% of North America,” he said. “We want that to continue.”

Dr. Winters said he expects many more students will be recommended for 113A than will be accepted. He said the test will be team-scored on a blind basis, for an accurate score.

Mr. Sherr asked whether 113A and 113 would have the same curriculum. Mr. Winters said that the difference would be greater rigor, depth and faster pace. “The goal is not to give them an extra 25 minutes of homework, or give them four more tests, write five more essays, have them read 3 more books,” Winters said.

Mrs. Appelbaum asked how likely it would be for middle school ALP students to be identified for 113A in 9th grade. 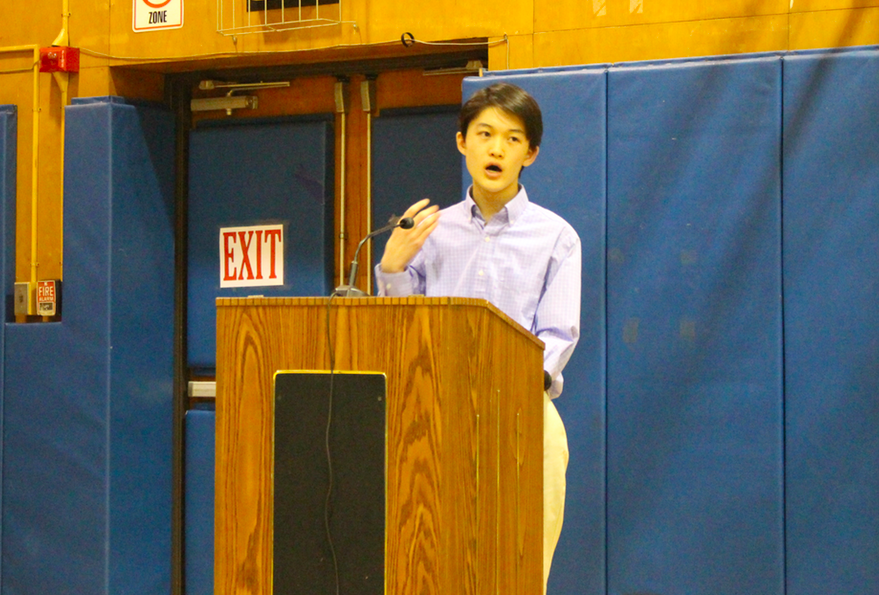 “Not all of them should necessarily qualify,” Dr. Winters said of middle school ALP students and 113A. “A lot of them got in very early and stayed there. Other students matured later, or came into the district later. There is opportunity for movement and that may be difficult for them to swallow – that my child has always been in ALP and now they may not.”

Harvard-bound senior Julia Bunte-Mein said, “I truly do believe this is the best option to satisfy  the academic needs of the advanced students.” But, she said, “I worry the pressure to succeed starting so young will go higher and higher and we don’t know how far is too far.”

And while Bunte-Mein’s support for 113A was tepid, student body president Blake Reinken didn’t mince words.

“I firmly believe that an additional advanced level is the wrong course of action for GHS. Some parents argue that the lack of tracking in 9th grade is a detriment,” Reinken said, adding that he believed that to be untrue. 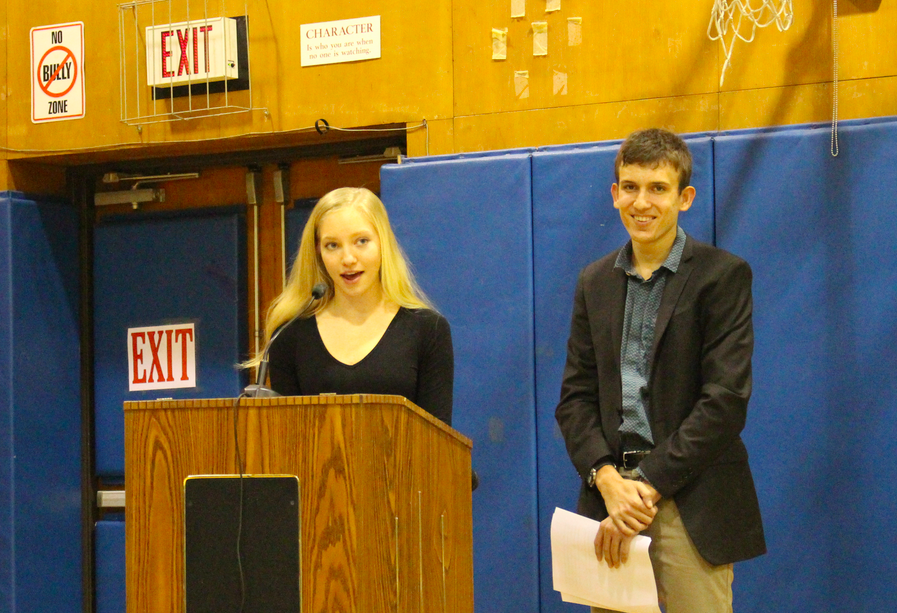 “Advanced 113 will stratify the highest group of 8th graders in English and Social Studies and set them apart from their peers,” Reinken said. “Advanced 113 will discourage kids who do not qualify from taking AP Us History, AP Language and Composition and AP Government later in high school even if they are immensely qualified.”

“The Board of Education is supposed to support all students, not just those with the most vocal advocates,” Reinken said. “In attempting to advance our course offerings we may rob students of an education.”

Relaying the sentiments of other GHS staff, Sutton quoted a GHS teacher, who said, “I had one of the Intel finalists in 113. As you can imagine, he was in class with students from a range of abilities, and some of these students were his best friends, but probably would not have qualified for the proposed honors section, and they all made the difficult transition to high school. Even the most brilliant 9th graders can be very immature…The 9th grade year is a time to learn real world lessons like work ethic, patience, self-advocacy and more!”

“GHS students have performed and are performing exceedingly well under the current model,” Sutton said.

Kim Blank, the PTA ALP rep for CMS said, “I don’t want the perfect to get in the way of the good.” She said she worried an arbitrary 15% cap would be unnecessarily restrictive, creating “unnecessary consternation” among middle school parents and students.

In the Board’s discussion on a motion to approve the proposal, just two Board members expressed reluctance. Mrs. Appelbaum wondered how moving to three levels would effect the college process, and how it would impact those rejected for 113A.  She said she was also concerned about the social-emotional aspect of 8th graders suddenly separated from their academic peer group.

Laura Erickson said, “It is not clear to me at all that there is consensus….These kids don’t get a do over. I don’t want any particular group of kids to be guinea pigs… I am not there yet.”

“We’re not creating a whole new course from new cloth,” Mr. Bernstein said, adding, “Unlike Laura, I view this like the Innovation Lab, which we’re doing as a pilot. This is a self-selecting program. Students and parents can make the choice if they’re going to take the exams and do the process.”

Mr. Scherr described himself as having been a fish in a hot pan this week, having gone from in favor, to opposed and, again to favoring the proposal. “I worry a lot about middle pack kids,” he said, but ultimately threw his support behind a one-year pilot of 113A.

With a 30-year perspective on the debate, Barbara O’Neill, who previously was head of the Town’s ALP program, previously named the Talented and Gifted Program, said, “The same issues were raised when we changed from an enrichment program in grades 3-5 to an academic program. We had the same debate on picking 2nd graders for ALP. Then we had the same problem in middle school when we tried to do it for advanced language arts.”

“Teachers were very unhappy at first, but later, remarked, ‘My God, I had no idea those kids could think like that or do that level of work,'” O’Neill said, adding that by removing the kids who always have their hands up in class, the remaining kids had a chance “to shine.”

In a vote of 6 to 1 in favor of adding 113A as a one-year pilot, just Mrs. Erickson voted against the proposal.