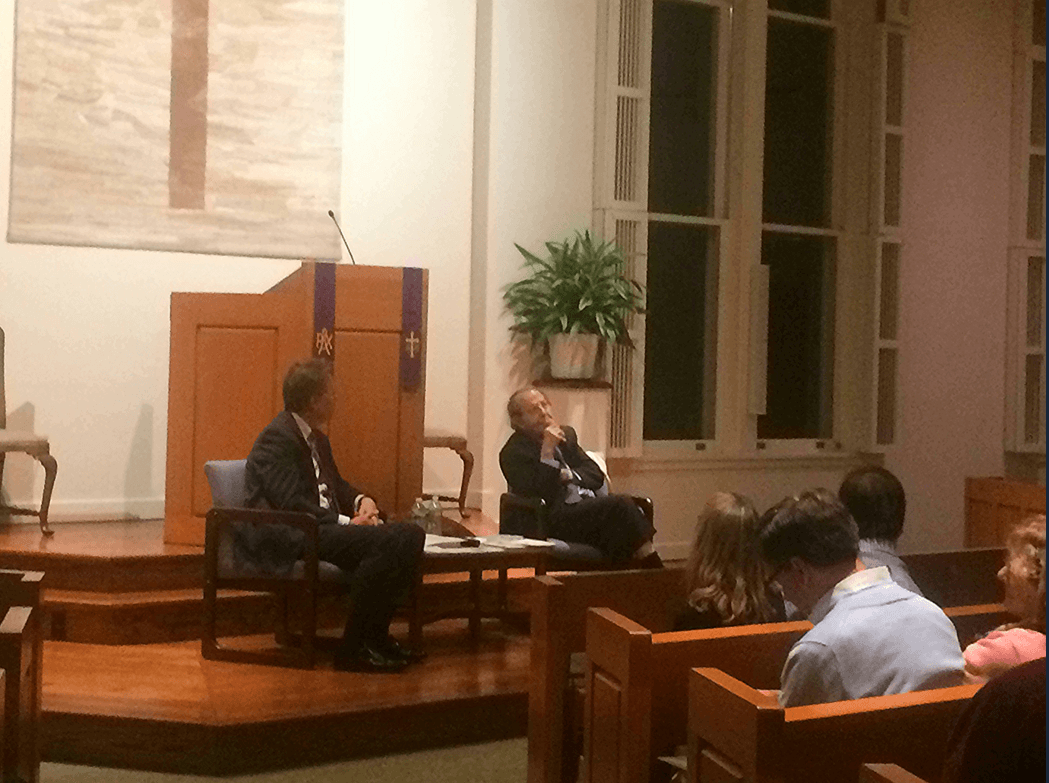 At Round Hill Community Church, Jonathan Kozol engaged in a Q&A lead by Reverend Horstman and a book signing.

Kozol is a widely read education writer whose first book Death at an Early Age, an account of his first year as a teacher, received the National Book Award.

In his answers, Kozol drew from his experiences writing in Paris with Richard Wright and William Styron, teaching in a poor Boston neighborhood, and listening to elementary school students across the country.

His transition from a writer to a teacher required learning to listen.

“When I started teaching, I wasn’t a great listener. I had gone to Harvard. I was convinced I knew the answer to everything,” he said.

“It’s important to not be afraid of silence,” he added. “Teachers often freak out when people don’t answer the question and fill the silence themselves. I try as much as I can to draw the dialogue out of the children.”

It is clear from Kozol’s books that he is easily able to form friendships with students.

“A teacher had to be someone austere, flavorless when I started out – the human version of an eggplant,” he said. “I wasn’t afraid to let them know me as a human being. Children seem to sense that they can open up to me.”

This ability to connect with others contributed to his journalism as well.

“All writers feel to some degree that we’re exploiting the trust people give us,” he said. “That’s why I try to stick it out with some people. Yes, they give me their stories, but I try to provide emotional support in return.”

Kozol hopes the stories he tells will illuminate the great disparities between the quality of education in wealthy and poor areas. He believes that the funding system is part of this problem.

“Education funding is largely based on local property wealth,” he said. “This made sense in the colonial times when people stayed for their whole lives in one town. But now we don’t just serve the interest of one town but the entire country. Most developed nations don’t have this funding system.”

“My wealthy friends ask ‘Can you really solve problems by throwing money at them?’” he continued. “And I always say, ‘Yes.’”

Another policy he advocates for is the diversion of funding from standardized testing to universal pre-school. “What happens in these first five years is far more important than anything that ever happens after,” he said.

Kozol believes that rigid test preparation takes the joy out of learning, especially in poor areas where it is more difficult to meet testing standards.

“We’re placing so much emphasis on utilitarianism. I don’t think schools should exist primarily for future productivity,” he said. ”I think it should be to provide a happy childhood. The best schools hold a high premium for things that can’t be taught.”

Kozol understands that he is asking for big changes to the education system. “I don’t want to drown in despair while waiting for these transformations. I look for battles big enough to matter, but small enough to win,” he said.

His books have not only influenced education policy, but the way individuals interact with education. One question from the audience started with, “I am a better teacher because of you.”

Another audience member, Raymond Rodriguez, grew up in one of the poor communities Kozol describes in his books.

“I really appreciate what Kozol is doing and the words he has said,” he said. “His work paves the way for young advocates like myself.”