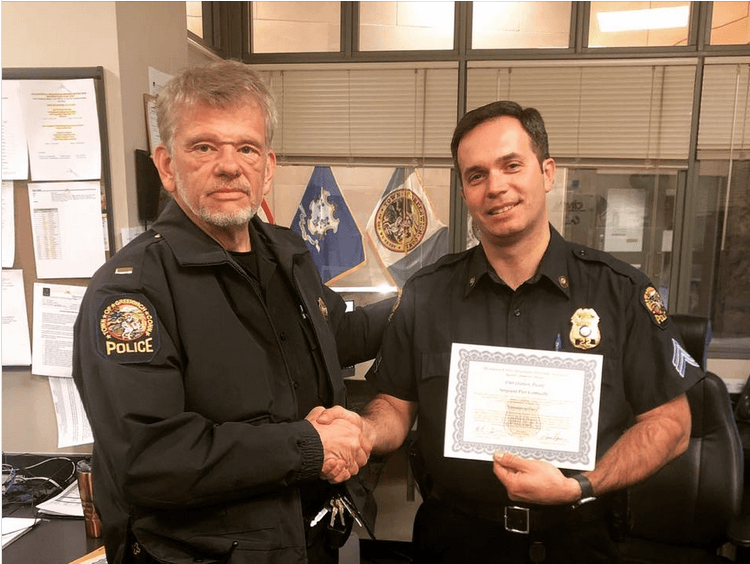 Greenwich Police commended Sergeant Pierangelo Corticelli, Supervisor of the Forensics Division, for his around-the-clock dedication and on-scene involvement in a recent homicide investigation.

The body of Valerie Reyes who was found inside a suitcase in a wooded area along Glenville Rd on Feb 5.

On Tuesday, Feb 12 Javier Enrique Da Silva Rojas was charged by complaint with the kidnapping of Ms. Reyes in New Rochelle, New York, and unlawfully transporting her to Greenwich.

According to Lt Slusarz, Sergeant Corticelli is a recognized expert in the field of forensics.

“He is very good at it, and so is his team,” Slusarz said, adding that Corticelli has a team of three detectives working with him.

Slusarz said Corticelli was also involved in the investigation of the dragging death of Meghan Beebe, 21 in 2013. Ms. Beebe was hit and dragged through a municipal parking lot in Byram.

Vyacheslav Cherepov, of Ridgefield, who was a waiter in Byram, later pleaded guilty to leaving the scene of an accident that resulted in the Ms Beebe’s death. She was dragged for 900 feet and died from her injuries.

“There were a lot of broken car pieces,” Slusarz said. “Sgt Corticelli meticulously collected them and put them back together in the case of the woman who was hit and dragged in Byram.”