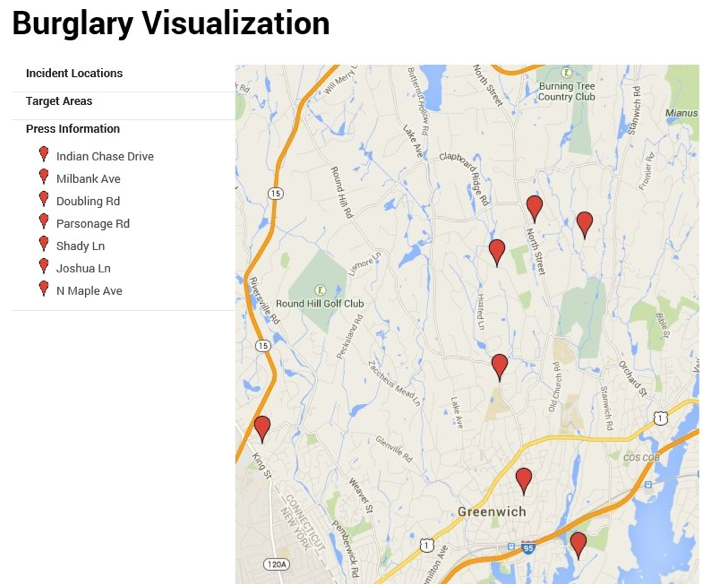 According to Lt. Gray, although there aren’t always patterns — some burglars target secluded homes, others target homes of people they know — residents can minimize the likelihood of becoming targets. Gray said residents should activate their alarm systems, even when they are home.

“You’re in the house on the second floor, put your alarm on,” Gray advises. “Right now this group is organized and professional. They are practiced at what they do and have a good idea how to do it successfully. That means you have to take every precaution you can.”

Gray said precautions include using motion sensors, and that having dogs can help deter burglars, but so will neighbors who see something suspicious and look out for each other.

Gray reminds residents that recently an alert neighbor in central Greenwich saw what he suspected were thieves who had been going through cars, and a quick call to police resulted in their apprehending the culprit.

Greenwich Police are taking the holiday weekend burglaries very seriously and have stepped up both uniformed and plainclothes patrols around Town and made some adjustments to their patrol response and staffing.

Police are asking residents to be aware of activity in their neighborhood as no one knows their areas better.

Anyone observing a crime in progress should dial 911 and report immediately. Anyone who observes a suspicious person in their neighborhood should call the non-emergency dispatch number at (203) 622-8001.

According to Lt. Kraig Gray, the burglaries, four completed and one attempted during this past weekend, occurred all over town and most likely during the hours of darkness.

Four additional burglaries also occurred in the past month. The suspects entered the homes by various methods. The thieves used force to open doors and smash windows for access and on at least one occasion used an unlocked second floor balcony door to gain entry.

Investigators located a neighbor of one of the burglarized homes who actually observed a suspicious subject in the area but did not contact police. According to Lt. Gray, it is absolutely critical that suspicious activity be immediately reported to the police in order to identify and apprehend suspects.

Gray said Greenwich Police believe that the homes were targeted by an organized group and that these were not simple crimes of opportunity.

The homes seem to have been targeted based upon the likelihood that they were unoccupied, but in one instance the victimized home was occupied. In that instance the suspects left once they realized that someone was home. Typically thieves are looking to steal portable high value items, quickly and without conflict.