Even the machines on the train station platforms have been rigged by greedy criminals eager to access credit card information.

Detective Solomon who is a member of the Connecticut Financial Task Force – which includes the IRS, the Postal Service, State Police and local agencies – said it’s a challenge to keep on top of the ingenious strategies that target credit card and bank account information. He said residents should be extra vigilant over the weekends when banks are closed but ATMs in their lobbies are open – especially holiday weekends, which give criminals an extra day to get their work done.

“Europe is a crystal ball for the future,” Solomon said. He also explained that criminal gangs often use juveniles to install skimming devices because they will not be charged as adults if caught. Children as young as 13, 14, and 15 are often accomplices in these crimes.

When caught the charges for these skimming activities include Bank Fraud and Aggravated Identity Theft which are sentenced consecutively for a total of several years. Both are federal offenses.

Residents are advised to use one card to gain access to an ATM lobby and use a different card at the actual ATM machine.

Skimmers ideally seek both sets of card information. They even sometimes install cameras inside smoke detectors in ATM foyers to see customers’ information.

There are other strategies to foil these criminals, who often use an “overlay” over a PIN pad.

Thieves literally lay a replica over the authentic one and secure it with double sided tape.

Detective Solomon said wary residents should check to see if a PIN pad on an ATM, or even a gas pump or store point-of-sale device, is firmly in place. “Wiggle it and make sure nothing moves,” Solomon advised.

GAS PUMP SKIMMING   Criminals connect to the Bluetooth device inside a gas pump. They capture magnetic strip data and store it. Then they use the their Bluetooth device to transmit and receive the data from the gas pump. There is nothing on the outside visible to the customer or gas station employee.

Often thieves install their skimming devices after midnight or after hours over a weekend. Then they will drive up in a U-Haul and block the employees’ view of the pump. From there, the skimming device can be installed in as little as 45 seconds. 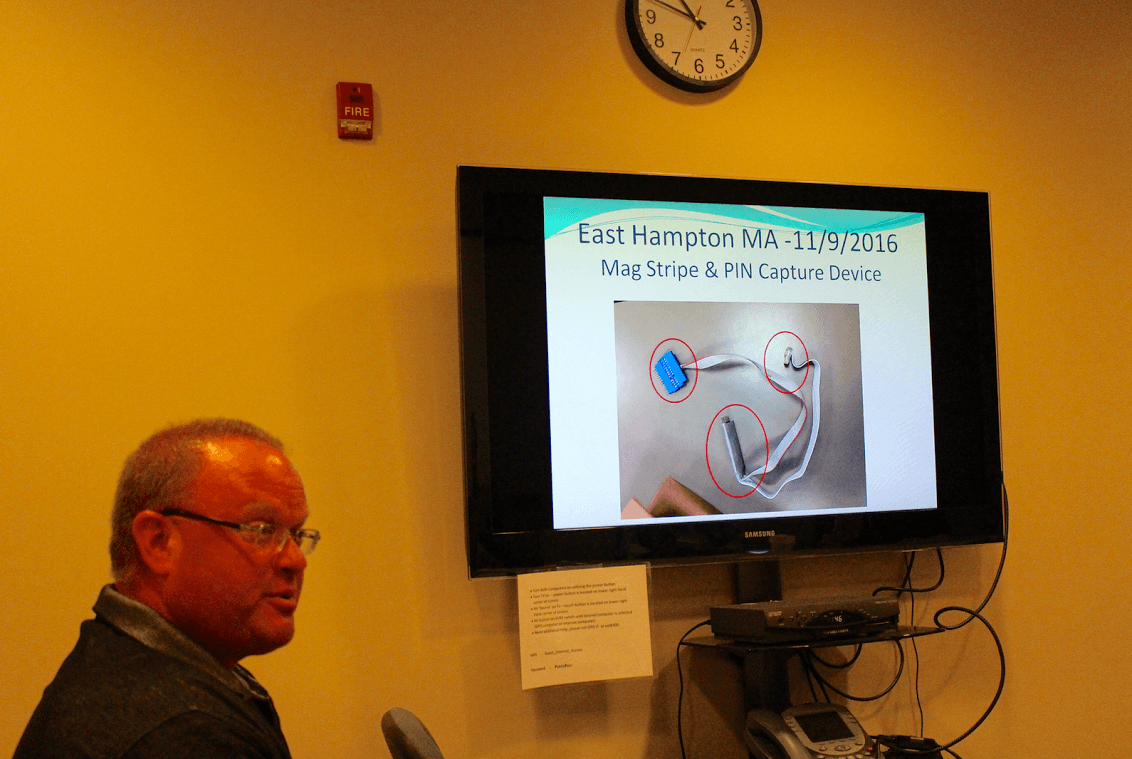 “It’s a cat and mouse game,” Solomon said, adding that the technique originated in California and made its way to the east coast.

Gas pumps are kept locked, but many are locked with generic keys.

This will eventually change, but for now is an invitation to criminals who then access customer’s PIN number and card data, and go straight to the ATM and withdraw cash.

Detective Solomon said these techniques are even taught online via YouTube.

However, the good news is there are some prevention measures for gas stations, including “secure seals” which are placed over the lock mechanisms. And, fortunately gas stations are moving away from generic keys and seals that are easily counterfeited.

Some seals will say “void” if they have been tampered with. Also, the Dept of Consumer Protection has emailed gas stations with information about how to ensure that  seals are not counterfeited.

Solomon said that if employees at a gas station detect a skimmer they are advised not to touch it, and call law enforcement immediately.

POINT OF SALE SKIMMING   This takes place when a customer uses a card in a store where a criminal has slipped a card reader “overlay” over the device.

Solomon said this is common among criminals from Eastern Europe who distract the cashier or teller and put their overlay over the device.

“You are actually putting your PIN number into the counterfeit PIN pad,” Solomon aid.

This technique is happening more and more often. Solomon said often the thieves use 3D printing technology here in the US to make the overlays.

PROTECTING YOUR PIN.   Detective Solomon said it’s not enough to put your hand over a PIN pad while you key in your password.

He said it’s important to have your free hand hover very low over the hand that is keying in the password. He said thieves install tiny cameras very low to the PIN pad.

In addition to holding your free hand over the PIN pad, Solomon says to wiggle the pad to make sure it is not loose. If it is loose, that is a sign that there may be a counterfeit overlay.

PRIVATE ATM’s at RESTAURANTS AND CONVENIENCE STORES.  Detective Solomon said there are ATM’s in addition to  financial institutions, and residents are vulnerable because ATM machines in restaurants and convenience stores typically do not have surveillance cameras.

Again, the bad guys are inserting skimmers to the ATMs and they are undetectable from the outside of the machine.