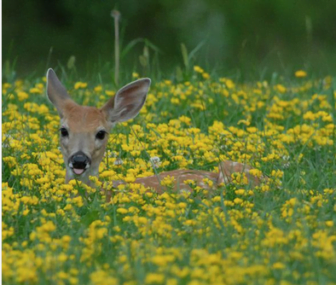 Carlin said that recently Animal Control has been received one to three calls about fawns on a daily basis.

“People think they’re abandoned, but the mother  has to go and feed herself and can’t stand guard,” Carlin continued, adding that people see the baby alone and get worried. “Moms do not stay with the fawns all day long, as they do not want to attract predators to their babies. Please do not assume they are abandoned.”

“People often step in and move the fawn,” she added. “The mom won’t be happy and will come running.”

Lt Nemecek’s advise is, “If you see a fawn leave it alone.”

However, if the fawn remains alone for days, or has flies on it, that could be a sign that it is injured, so call Animal Control.

“Wait at least 24 hours,” Carlin said. “We’ll get a wildlife rehabber if need be. If it walks around cries – it’s a goat like bleeting – and the mom hasn’t been there in a while, you can call us but don’t step in and pick them up and move them somewhere else. You’re essentially separating them from their mother.”

Last Wednesday officer Carlin said the department had to euthanize a doe that had been hit by a car and broken all her legs.

“We saw she had been lactating, so we checked the area for babies. Two days later, a person at a music store in Old Greenwich said they’d seen her and the babies walking around. They had to be down-and-out enough. We had enough people to corral both of and we brought them to Wildlife in Crisis in Weston.”

Wildlife in Crisis is a non profit organization licensed by the Connecticut Department of Environmental Protection and the United States Fish & Wildlife Service, that cares for injured and orphaned wildlife.

Officer Carlin said the two fawns will be rehabbed in Weston with minimal human contact and released in the fall.

“When people take in fawns, maybe bottle feed them, they cannot be released,” Carlin said. “It’s a death sentence.”

Check out these sites for further information.