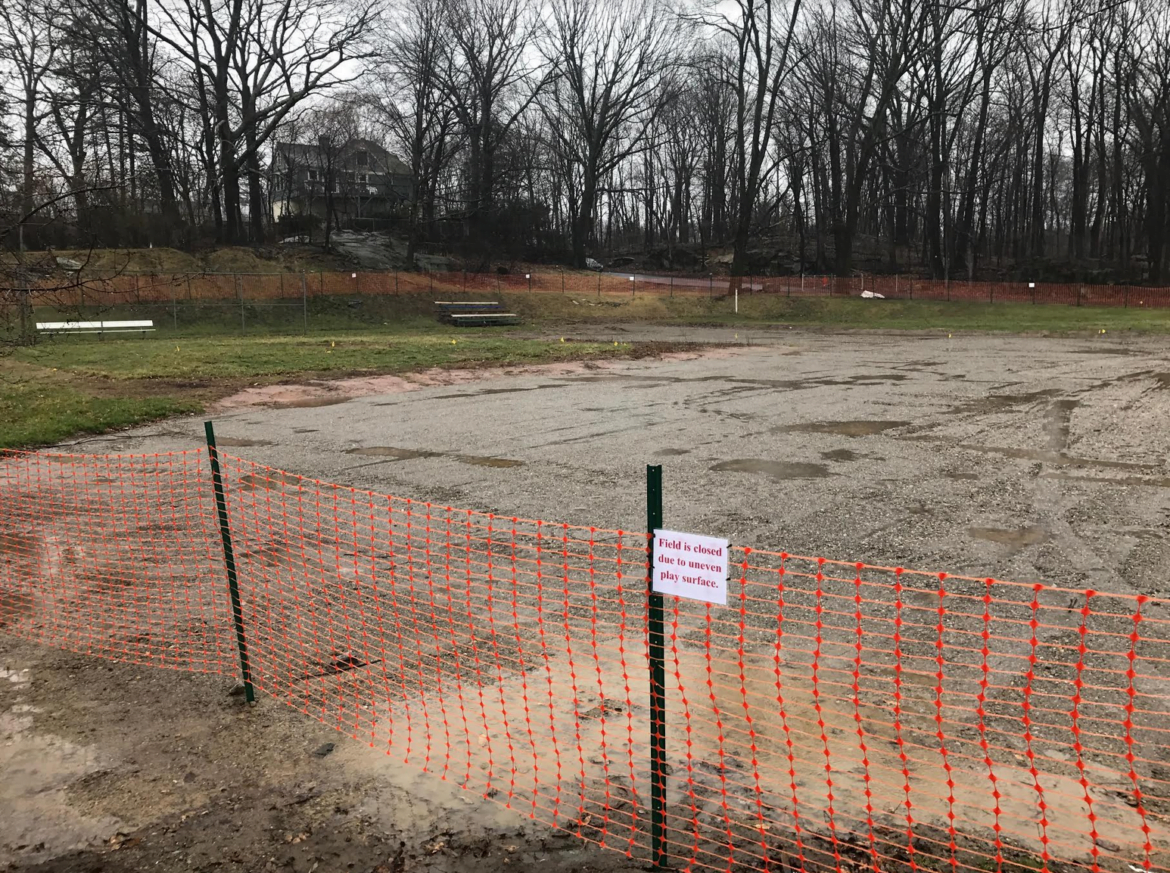 On WGCH’s “Ask the First Selectman” show March 31, the current condition of the William St field in Byram, what passes for the Village Green, was raised as an on-going community issue due to orange safety fencing excluding all use of this newly re-opened field.  The first Selectman speculated that the field was possibly awaiting hydro-seeding or final preparation for baseball.

Since I had just passed the field I called in to explain that the remediation contractor working under a DPW permit had not replaced the topsoil, leaving cuts to subsoil where material had been removed.

Later in the day, Mr. Tesei responded with this explanation:

“The Public Works Department supervised the external contractors remediation of the William Street Field. With the remediation complete, the custody of the William Street Field was returned to the Board of Education. The contractor did its best to tapper the evacuated area.  The Schools Facilities Director, Ron Matten, in consult with the Town’s Risk Manager erected the “snow fencing” because they felt the play surface was uneven and presented trip hazards.”

To justify not returning the field to a safe condition for casual walking use, far less baseball, he continued:

“The school construction is anticipated to begin in June of 2017. Any topsoil and grass that is seeded in March/April will likely be destroyed.”

The New Lebanon School Building Committee has given the community assurances that no tree cutting and no construction will begin until the funding package is in place.

This will depend upon a resolution of issues with the State and approval by the State of its possible $25 million payment.

The replacement of topsoil was part and parcel of taking the field out of use for remediation due to toxic elements in the playing surfaces.

A change in use of this field required a “Municipal Improvement” resolution by the RTM.

In the absence of a receipt of the money for school construction, no part of Town government has or had authority to turn the field back to the Byram community in an un-safe and un-usable condition.

The denial of use for a Village Green or a play field is another spring season of neglect by an administration more focused on its “branding” campaign,  papering over the black marks of dysfunctional Town governance with slick PR.   Is this election politics?