According to the Assessor’s office at Greenwich Town Hall, the 14,330 sq ft structure was built in 2014. 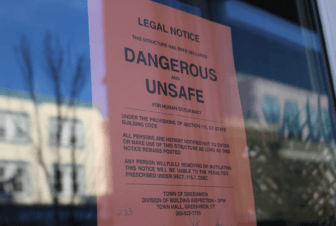 A sign declared the building that houses The National Unsafe for Human Occupancy following a fire on Sunday. February 5, 2017

In February 2017 there was a fire in the cooking area at The National Restaurant that extended up into the chimney and hood duct system. For a time there was a sign in the window that said the space was being renovated and they looked forward to reopening.

Today the website of The National restaurant has the following message:

“Unfortunately due to a fire, The National Greenwich is closed and will not be reopening. We loved serving the Greenwich Avenue neighborhood and thank the community for their support since opening.”