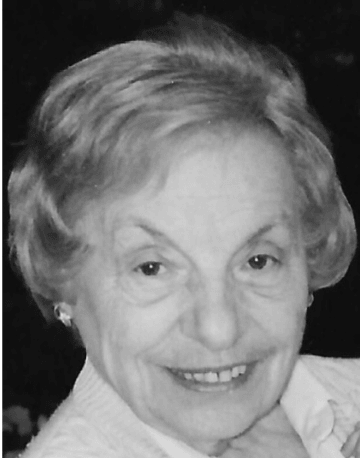 Vincentz Cianci of Greenwich passed away at home on April 23, 2017 at the age of 103. Vin was born in Castelgrande, Italy and came to the United States with her parents in 1920.

She was pre-deceased by her beloved nephew Bill Gasparrini and is survived by his wife Sue of Biloxi, Mississippi.

Her first professional position was as a teacher of developmentally disabled boys in New Jersey. This was the beginning of her life-long passion for educating special needs children and teaching parents how to take an active role in their child’s education.

During her 42-year career with the New Jersey Dept of Education she held various positions including Home Training Supervisor, Child Study Supervisor, and Coordinator of Pre-school Programs for the Handicapped.

She was also a college professor of Special Education. Vin wrote and published many articles on the education of disabled children which she presented at conferences and meetings.

Vin was a delegate to the World Conference on Mental Health in Geneva, Switzerland and the Pan-American Conference on Mental Deficiencies in New Orleans. Vin was called an “innovator” and a “pioneer” in the field of Special Education and her work was featured in an article in the Saturday Evening Post in 1960 in which Vin was described as a “one woman rescue squad” for parents of disabled children.

During her busy career, Vin always made time for family. She spent weekends and holidays visiting her sister’s family in Greenwich. She shared her love of travel and interest in the world by taking her niece and nephews on many vacations, including cross-country trips and multiple European excursions, travelling on trains, planes and ships.

Upon her retirement in 1980, Vin moved to Greenwich to be close to her family and became involved in many religious and community organizations. She served on the board of the Greenwich Council of Catholic Women and the Saint Mary’s Ladies Guild. She was an active member of the Greenwich Women’s Club and the American Association of University Women. She was also a dedicated volunteer for the American Red Cross, the Bruce Museum, and taught English as a second language.

Vin’s greatest joy was participating in the lives of her nieces and nephews and encouraging them to follow their passions and become life-long learners. She loved reading and in later years read on her Kindle and listened to news on National Public Radio. She always enjoyed discussing current events, preparing delicious meals for her family, and gardening. She inspired family and friends by telling them, “Happiness first and all else follows.”

A funeral mass will be held at Saint Mary Church, Greenwich, on Saturday, April 29th at 10:00am followed by interment at St Mary’s Cemetery, Greenwich.

In lieu of flowers donations may be made to either of Vin’s favorite charities, World Vision, please visit WorldVision  or The Amalia and Nicola Giuliani Foundation for Religion & the Arts, 45 Dorethy Road, Redding, CT 06896.