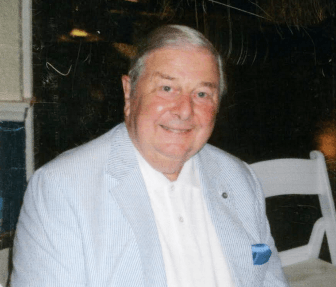 Richard C. “Dick” Johann of Greenwich, CT passed away at the Greenwich Hospital on April 23, 2020 succumbing to the insidious Covid-19 virus after a valiant struggle.

Born on August 10, 1932 to the late Anne C. Johann and Otto G. Johann, “Dick” was a lifelong resident of Greenwich. He was educated in the local schools, graduating from Greenwich High School where he established many lifelong friends.

He received a Bachelor of Science degree in Business Administration from the University of Bridgeport which prepared him for a long illustrious career in international industry.

Before embarking on his professional career, Dick proudly served his country during the Korean conflict as a seaman in the United States Navy aboard the USS Darby DE-218.

Upon his return to Greenwich, Dick started his family and entered the realm of the corporate world. Mentored by the late Theodore Greeff of Greenwich, Dick became national Sales Manager and then succeeded Mr. Greeff as President of the then renowned luxury fabric company, Greeff Fabrics. Dick’s tenure was marked with many awards and high accolades from his peers. He served in that capacity for twenty years after which time he became President and Chief Operating Officer of the British fabric company Osborne & Little. After 10 years Dick retired from the company but couldn’t stay retired long. He was asked to serve as the United States Managing Director for the venerable German luxury fabric company Zimmer &Rohde.

Dick finally retired at the age of 80 after over 40 years in the industry, a true legend in his profession.

Dick was a former co-owner of Hoagland’s of Greenwich, active in many civic and community activities in and around Greenwich, always willing to give of his time or resources. He is a proud and unabashed Catholic and a lifelong communicant at St. Marys Church.

More importantly than his professional accomplishments, Dick most wished to be remembered for his love and devotion to all his family.

Dick is survived by his loving and caring wife of 43 years, Barbara (McGrath) of Greenwich, his “rock;” his daughter Deborah (Kevin) Blanchette of Byfield, MA; daughter Susan (Richard) Coates of Katy, TX; son Richard (Jon) of Ft. Lauderdale, FL; seven grandchildren and seven great grandchildren and many nieces and nephews and grand nieces and nephews. He is also survived by his brother and best friend, John “Jack” Johann and wife Jane of Victor, Montana. In addition to his parents, Dick was predeceased by his son, James J. “Jimmy” Johann; sister Betty Anne Marciniak; and sister Edwinna Dittmar.

The family extends its deepest appreciation to the doctors, especially Dr. Marcus Mayus, nurses and staff at Greenwich Hospital for their care in this terrible pandemic.

A memorial Mass in celebration of Dick’s wonderful life will be held at a later date when the world returns to normal.