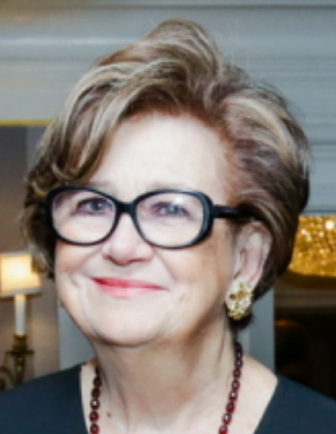 Margaret Hayes Adame passed away at her home in Greenwich on February 28, 2019 after a battle with metastatic breast cancer. She was 79.

Born on August 9, 1939 in Queens, NY. to Ruth Hayes (nee Signer) and Francis X. Hayes, she attended Queens College, graduating with a degree in History. After entering the Bloomingdales Executive Training Program, she became a cosmetic buyer. Recruited by Saks’ Fifth Avenue in 1976, she rose to become Senior Vice President, General Merchandise Manager, overseeing seven divisions, at a time when there were few top level female executives.

In 1994 she became President and CEO  of The Fashion Group International, a non-profit, professional organization established in 1930 by and for women (men were welcomed to  join in 1997), founded in part by industry luminaries such as Edith Head, Dorothy Shaver, Claire McCardell, Elizabeth Arden, Helena Rubinstein, and Eleanor Roosevelt. At FGI, she oversaw a membership of 5000 men and women engaged in the fashion and design-related industries, spread over twenty six regions around the United States and internationally.

She has been the recipient of numerous humanitarian and business leadership honors awarded by The American Cancer Society, The American Jewish Committee, the City of Hope, Queens College, The Samuel Waxman Cancer Center, Cosmetic Executive Women, The Children’s Hospital at Montefiore, and the prestigious La Medaillè de la Ville de Paris, among others. Margaret also served on a number of corporate and non-profit boards including International Flavors and Fragrances, The Movado Group Inc., LIM Fashion Education Foundation, and The Mosholu Preservation Corporation. An avid traveler and lover of history and art, she was admired for her steadfast determination, her straight-talking ability to get to the point, and above all, her generosity of spirit.

She was predeceased by her husband of 42 years, Omar Adame. The family is very grateful to Dr. Lee, and also the GeriCare staff who took such good care of her.

Donations in her honor may be made to the Michael J. Fox Foundation for Parkinson’s Research.  For more information or to place an online condolence, www.coxeandgraziano.com.