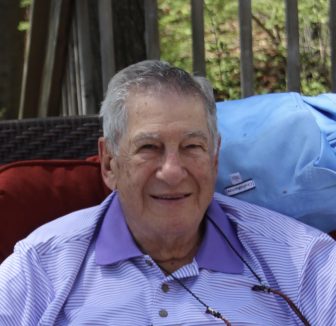 Lou Caravella, a lifelong resident of Cos Cob, died on Thursday, surrounded by family and friends. He was 93.

Lou, known fondly as “The Mayor of Cos Cob” or “That Tax Guy,” was born in Greenwich in 1926 to Patsy and Elisa (DeBenedittis).

He leaves behind his wife Judy. They would have celebrated their 66th anniversary on Feb 7.

Lou attended Greenwich Public Schools and graduated Greenwich High School in 1944. He served in the Air Force from 1944 to 1946.

An avid bowler, he began his first family business at the Elm Street Bowling Alley after being discharged from the service.

Later he was a sales representative for a Stamford wholesaler that sold candy, tobacco and sundries.

Though he served as the Town of Greenwich Tax Collector from 1998 to 2009, yet it was Lou’s constant presence at Post Stationery in Cos Cob that made his face familiar to so many families.

He knew the faces of the many children who came to his store, noses pressed against the candy display, salivating over a favorite piece of candy.

His family joked that if a resident didn’t know Lou from the shop, they learned his name when their tax bill arrived in the mail.

Despite working long hours in the shop, Lou found time to volunteer in the community and was a member of the Byram-Cos Cob Rotary Club for 41 years. He was a member of RTM District 8 for 10 years. He also served on the Town’s Board of Assessment Appeals.

Lou was a dedicated member of the Greenwich Old Timers Athletic Association, where he served as president in 1996.

Additionally he was Justice of the Peace in Greenwich and served as chair of the Democratic Town Committee.

While Lou was an aficionado of many sports, his true love was bowling, an interest that stemmed back to 1946, when he was introduced to the game by Bob Allis. In the early 1960s, he was a bowling instructor with John Petise for the Greenwich Recreation Board’s Junior League, teaching many youngsters the game.

In 1960 Lou, Larry Lamoreux and a number of local bowlers organized the Lower Fairfield County Bowling Association, which became one of the elite bowling organizations in the area.

For ten years, Lou and Bob Allis were teammates on various bowling teams and before forming the LFCBA, they were members of the New York Bowling Association, traveling to many association tournaments throughout New York State.

Although he never bowled a 700 series, Lou came close, recording a score of 698.

His work with the Rotarians is also exemplary, and in 1979, he was the recipient of the Donald A. Adams Outstanding Award for Rotary District 798. This prestigious Rotary honor is presented to a member who best represents all-around contributions to the Four Avenues of Rotary Service. Consideration is given to the candidate’s exceptional service to both his or her club and District.

Lou was also proud of his service as a member of the Youth Exchange Programs for the Northeast Region of the Rotary Clubs of America. Over the years he and Judy hosted a total of 14 students who hailed from Argentina, Mexico, Belguim, Japan, Bolivia, Brazil and Australia.

“Like thousands of other kids who grew up in Cos Cob over the many decades, Lou and his store were always a part of our lives,” Camillo said. “If you were a student at Cos Cob School, you spent time in that store, before and after each school day.”