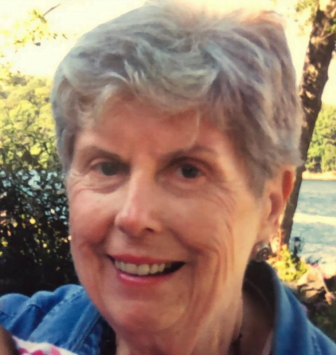 Janet Post Vojt “Mama” passed away March 3 at the age of 89 peacefully at her home in Greenwich, CT. She was born on January 17, 1931, and was raised in Danbury until attending nursing school at Mt. Sinai Hospital.

While working as an emergency room nurse at Greenwich Hospital she met her future husband George Vojt, a Greenwich Police Officer.

Together they settled and remained in Greenwich for the rest of their lives. Janet worked as a nurse her entire career including Greenwich Laurelton, Electrolux, and Byram shore. She also served as the neighborhood nurse attending to several family members and neighbors and even their pets.

Her most important role however was as mother, grandmother and great grandmother. Affectionately known to everyone as “Mama” she encompassed all that a grandmother had to offer. Shuttling her three grand children to extra curricular’s and attending every concert and activity they were involved in was the norm. Her love for them was immeasurable and it showed in her every day presence in their lives.

Janet is also great grandmother to Eliza and Isabelle Cornelius. The special bond she formed with “her girls” was in itself a rare and cherished accomplishment. Mama’s favorite place was always the lake house on Candlewood Lake and it is a love she has passed down to each generation. She also loved painting, gardening and her love of animals.

She was predeceased by her husband George Vojt, and grandson-in-law Joseph J. Cornelius.  She is survived by her daughter Georgianne Ingraham (Danny), grandchildren Ali Cornelius, Daniel and Gillian (Greg) and great grandchildren Eliza and Isabelle. She is also survived by her brother Roger (Lucy) Post and sister-in-law Millie Vojt and many nieces, nephews, and extended family.

Visitation will be held on Friday, March 6, 2020 from 4:00pm to 8:00pm at Castiglione Funeral Home, 544 Old Post Rd #3, Greenwich. A funeral service will be held on Saturday, March 7, 2020 at 10:00am at St. Paul Lutheran Church, 286 Delavan Ave, Greenwich. Burial to follow at Greenwood Union Cemetery, Rye, NY.
To leave an online condolence please visit www.castiglionefh.com