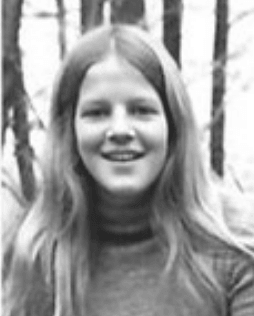 Dorothy Jo (Dede) Rogers died instantly when she was struck by a car in Huntington Beach, Cal. on March 9, 2019. She was born July 8, 1958 in Greenwich to Dorothy Dannemiller Rogers-Abbey, Santa Fe artist, gallerist, and writer, and the late Robert D. Rogers, Pres. of Rogers and Rogers, Inc., New York financial consultants, and Greenwich State Legislator, 1969 to 1973.

Tragically, Dede was mentally ill and homeless. She received extensive treatment, with little success. Her illness became graphically evident when she burned our family home to the ground on September 6, 1980 at age 22.

After the fire, as her mother, I met with Dr. Robert Daly, Bridgeport, (The Deinstitutionalization of Mental Hospitals in the United States). He said that Dede’s future life would be most difficult because of the closure of mental hospitals, inadequate replacement facilities and prohibitively expensive private hospitals. Dede was diagnosed as bi-polar with schizophrenic tendencies.

Travelers Insurance covered a year’s stay at Highland Hospital, Asheville, NC. Unfortunately, after this intensive therapy, Dede was released to the wide, wide world with no halfway house or transition plan. She had spent a year in jail for the arson prior to her hospitalization. Thus began a life of homelessness and jail. She married and Troy was born, 1983. Divorce followed. Troy was raised by his paternal aunt and uncle, Sharon and Jim Coffey. A second marriage to Charles Mickey ended in divorce. As a young teenager, Dede loved animals: her Icelandic pony, Jude; cat, Tuxy and the family dogs, Lucy and Augie. She was the anchor kid on a relay swim team that set county records. She loved reading and art. Her huge “Leopard with Yellow Spots” hung in our kitchen gallery.

Typically of the mentally ill, Dede self-medicated with alcohol and drugs. As a mother and responsible citizen, I write this obituary to make mental illness a reality in all of our lives, and advocate for an expansive treatment program, now sadly inadequate. The mentally ill person and loved ones tragically have to deal with stigma: individuals are “crazy” as well as their family having “crazy” genes. Mental illness is as real as diabetes or heart disease. It is a disease of the brain that can be treated with public awareness, understanding, and proven medical practice. Mental illness, in one form or another, affects 1 in 5 Americans.

After a robust mental health plan under President Carter in 1980, President Reagan closed almost all mental hospitals, creating our homeless. They were on the streets in droves to fend for themselves as they are doing today.

“Jails have become society’s primary mental institutions, though few have the funding or expertise to carry out that role properly,” New York author and columnist Heather MacDonald wrote in the City Journal. By 2010, there were “43,000 psychiatric beds in the United States, or about 14 beds per 100,000 people—the same ratio as in 1850,” wrote Deanna Pan in Mother Jones.

A July 20th Memorial is planned. If you wish, gifts may be sent to NAMI Santa Fe (National Alliance on Mental Illness) P.O. Box 6423, Santa Fe, NM 87502, https://namisantafe.org/donate_now/ or to your charity of choice