Republican Heather Smeriglio announced this week she seeks the RTC’s endorsement in July to run against Democratic incumbent Howard Richman in the race for Tax Collector. The election in on November 5, 2019.

Smeriglio worked in the Tax Collector’s office under Tod Laudonia for four years beginning in 2013.

But, as she explained on Thursday night at the St. Lawrence Club during a well attended kick-off party, when the department’s budget was cut, her time in that office came to an end.

“It was last one in, so I was the first one out,” she explained. “The BET cut the budget for tax collector and I was out.”

Since then, Smeriglio has been working in the Parking Services Department as a clerk.

Prior to joining the tax collector’s office, she worked in banking for 33 years, working her way up from teller to VP/branch manager, working at many different banks around town. 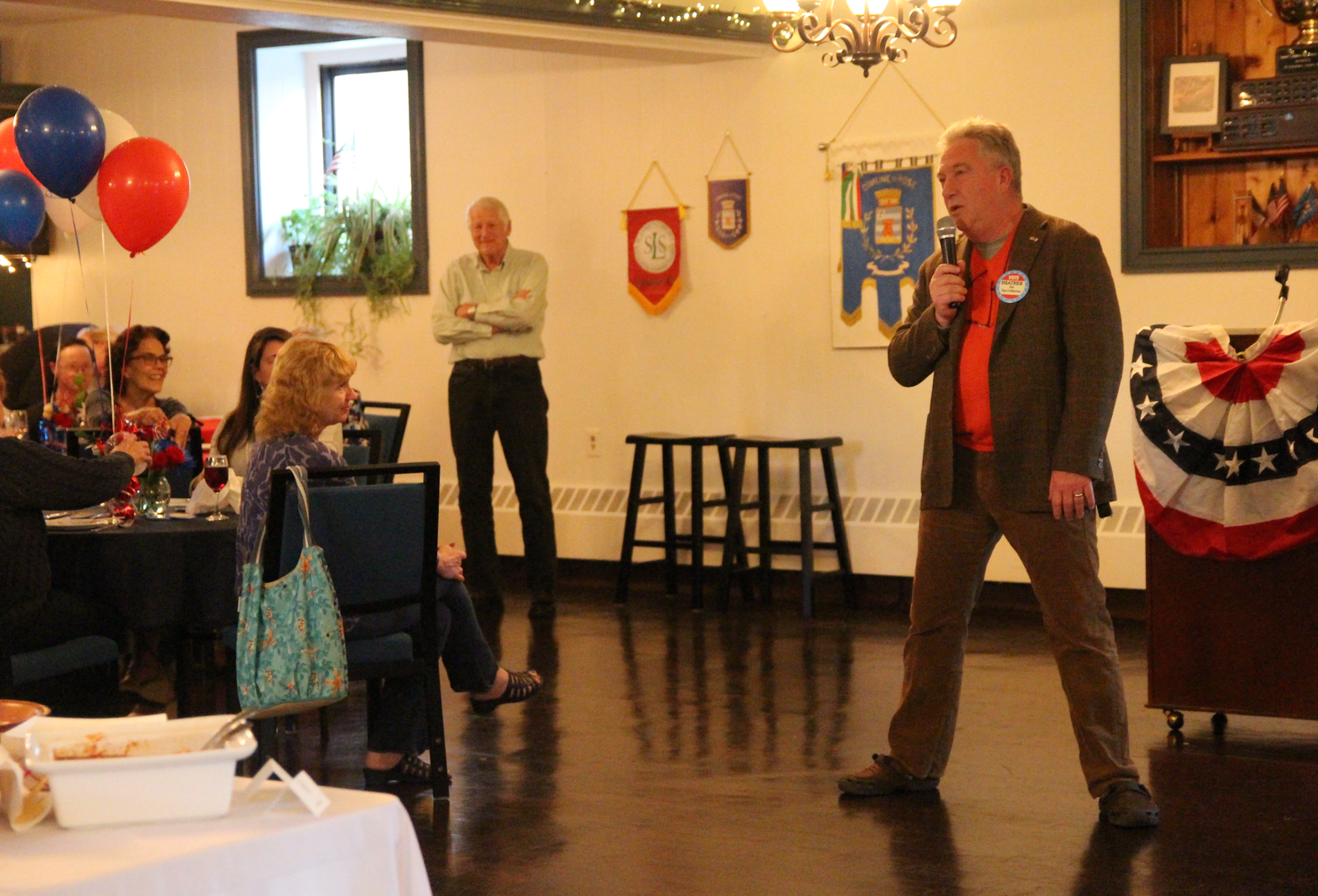 Former Tax Collector, Republican, Tod Laudonia, who lost by a narrow margin to Mr. Richman in November 2017, gave Smeriglio his resounding endorsement. He said he had approached Smeriglio about eight years earlier about working in his office.

At that point I told her, “Do what you have to do because one day you will be tax collector,” he said. “She is probably one of the most qualified candidates for tax collector that’s ever run for office.”

“As she stands here, she is one of three people in the Town of Greenwich who are certified to be tax collector. She’s one. I’m one. And there is one other – but it is not the tax collector,” Laudonia said, referring to Richman.

Mr. Richman has completed three of the four required courses to become certified, though the certification is not a requirement for the job. 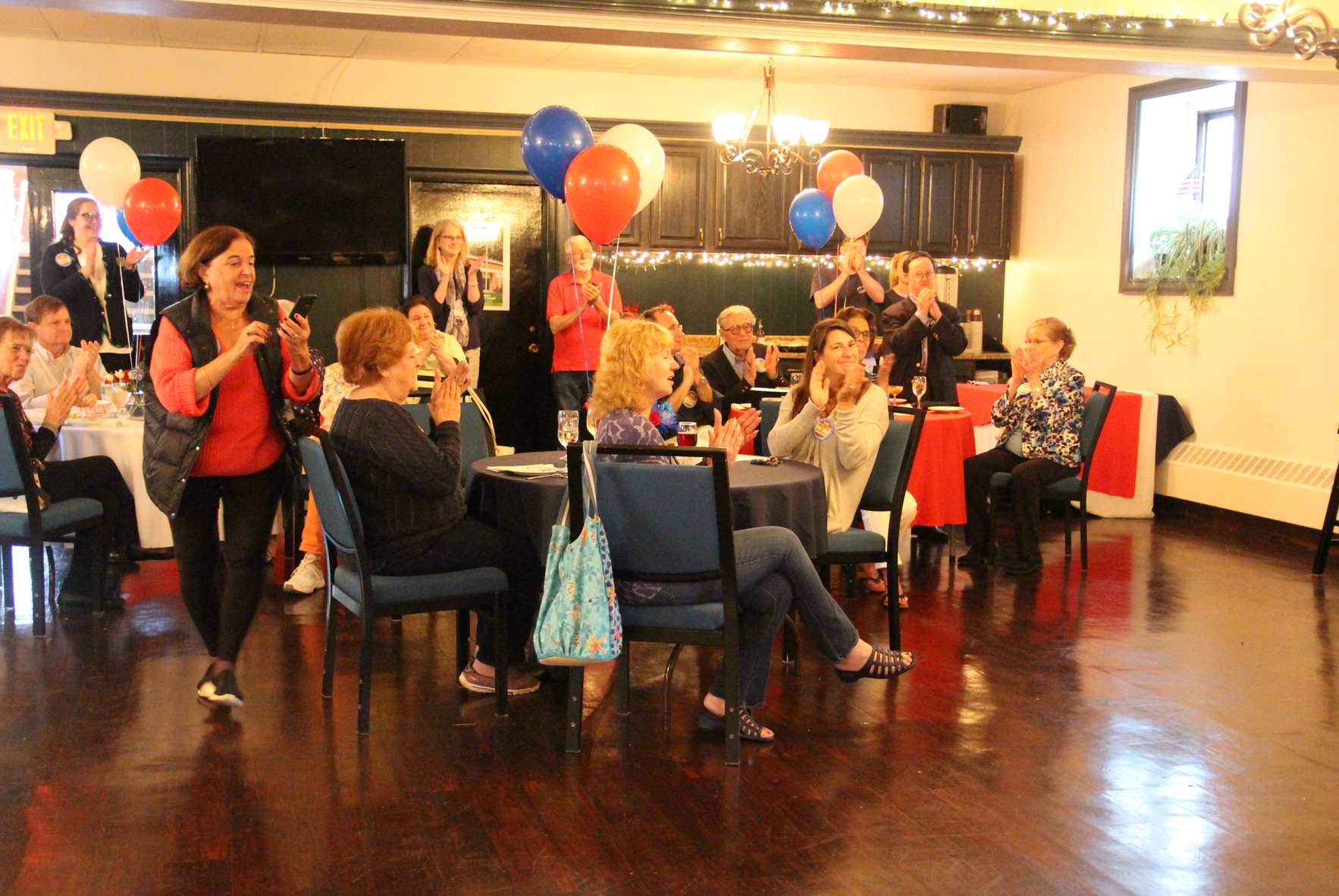 “Heather has the people skills and a great personality. She listens to people. That’s what the key in the whole office is,” he said. “Everyone thinks of Greenwich in one way until they live here and find out what a diverse group of people we are.”

Laudonia said residents who come to the tax collector want to be listened to.

“Everybody just wants you to hear their story and believe what they’re saying. Everyone is very sincere,” he said. “People in the tax collector’s office deal with tax payers usually at the worst point in their lives. They are in a situation they never dreamed they’d be in. A person like Heather will listen to them and help them.”

On his part, Mr. Richman announced he intends to run for a second term back in January. In March he mailed about 100 letters to property owners who are delinquent to the tune of roughly $5 million.

“If we don’t hear from them by March 15th we have the opportunity to take action,” Richman told GFP back in March. For tax payers who do not pay on time, interest accrues at 1.5% a month which equals 18% a year.

The ability to hold the tax sale is spelled out in CT General statutes section 12-155.

Richman said he hoped the letters would result in residents settling their tax bills. If there were to be a tax sale, the properties would be posted and bids made in an auction.

Asked about Richman’s potential tax sale, Smeriglio replied, “I’m not really sure if it’s necessary,” adding simply, “I look forward to working with the Town and BET.”

In her remarks to the crowd at St. Lawrence Club, Smeriglio said it took her several weeks to decide to run.

She said recently during Saturday errands in town with her husband John she told him she was waiting for clear instruction from God.

Just then she spotted a car with bumper stickers supporting Fred Camillo and Tod Laudonia.

“I remember turning to my husband and saying, ‘That’s a Republican in that car.'”

“So as we pulled up to the traffic light I turned and looked, and there was Linda Moshier and Irene Dietrich. I waved happily and said, ‘There’s my sign from God.’ That was the first of several signs he gave me. First and foremost, I want to thank him and give him all the glory for this chance to serve my town.”

Smeriglio said she and her husband are third generation Greenwich residents. She grew up in Byram and has also lived in Chickahominy and Cos Cob.

“Our two oldest boys have had the honor and privilege of serving in the Marine Corps. One is in currently deployed and serving in Spain,” she said to applause.

“In closing,” she said. “I would like to borrow the motto of my former high school, St. Mary’s, which I hold dear to my heart: Service above self.”