During Greenwich’s September 17 RTM meeting, the nomination of Jeffrey Medina for the Town’s board of Human Services hit a snag.

Mr. Medina, who has served on the board of Human Services since 2016, was nominated unanimously by the Board of Selectmen for another term.

A second 3-year term would extend his tenure through June 2021.

Medina got in some trouble for remarks made on social media. Mr. Medina made his remarks, which he has since deleted, on the Greenwich Free Press Facebook page.

Until the Nov 2017 election, Greenwich Free Press allowed comments on its home page through a widget called Disqus.

Unfortunately, the policy requiring commenters to use their real names was unenforceable.

Nasty comments and threats were left under aliases.

On Nov 7, the day of the election, Greenwich Free Press deactivated the commenting feature permanently.

The decision to disallow comments on the home page, announced publicly in a post on Greenwich Free Press, was met with approval from readers, and days later an invitation from NPR to come on the radio and talk about online civility.

“It seems like your readers are getting what you’re going for here, trying to encourage a little more civility, a little more accountability,” NPR interviewer Davis Dunavin said to the GFP editor during the interview.

The Greenwich Free Press decision wasn’t the only response to lack of civility online.

The day before the election, Greenwich Schools then superintendent Jill Gildea wrote written to parents urging civility, begging them to model good behavior for their children.

“Every single time you take to social media and comment, you’re sending your child a message about the kind of person you expect him or her to be,” she wrote. “Many of us have seen or have been the target of absolutely vicious personal attacks on social media. Cruelty is the lowest form of human behavior…”

On Facebook people often disagree, but conversations are typically civil and people call each other out when someone behaves badly.

That was the case with Jeffrey Medina.

Some of Mr. Medina’s comments were in response to news that Green & Clean would no longer raise funds for holiday lights on Greenwich Avenue. Medina said that the loss of holiday lights was the fault of “liberals destroying tradition.”

In response to a comment about the plastic bag ordinance and a commenter’s suggestion that Greenwich also ban crumb rubber artificial turf, Medina wrote, “Because they aren’t toxic. Jesus Christ. You people are nuts….”

In November, Medina posted a list of RTM candidates he said were “Who Not to Vote For” on the same day local blogger Christopher Fountain did likewise. This was around the time Fountain made his now infamous comment about female candidates being “shrieking banshees.”

Fountain’s blog post made national news. Medina’s did not. 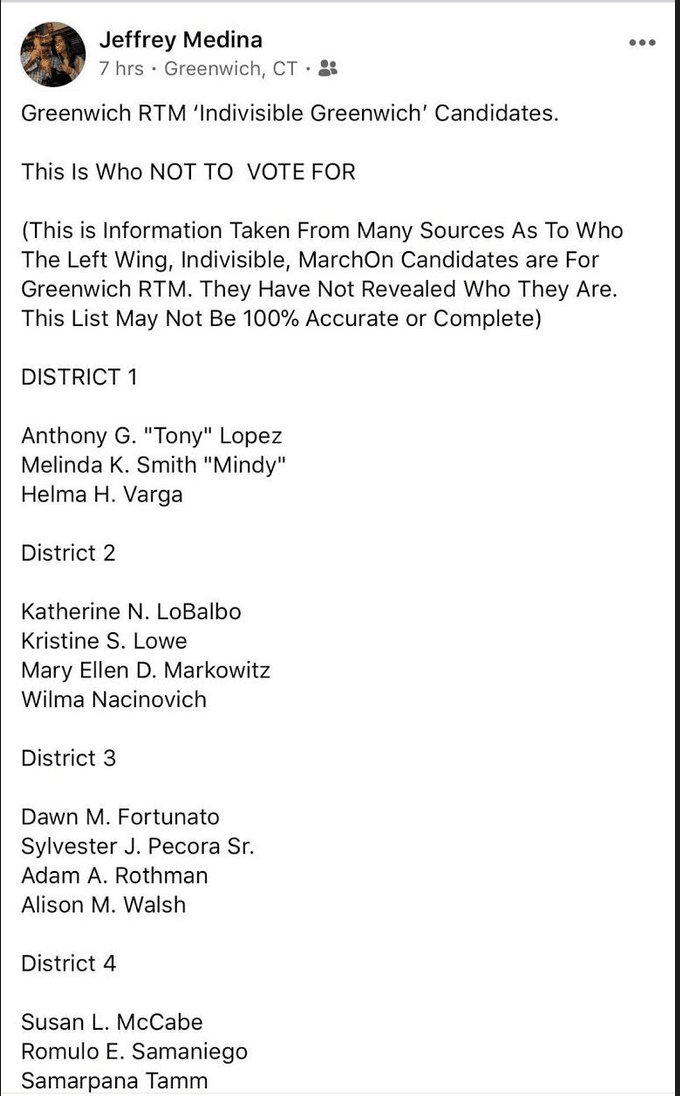 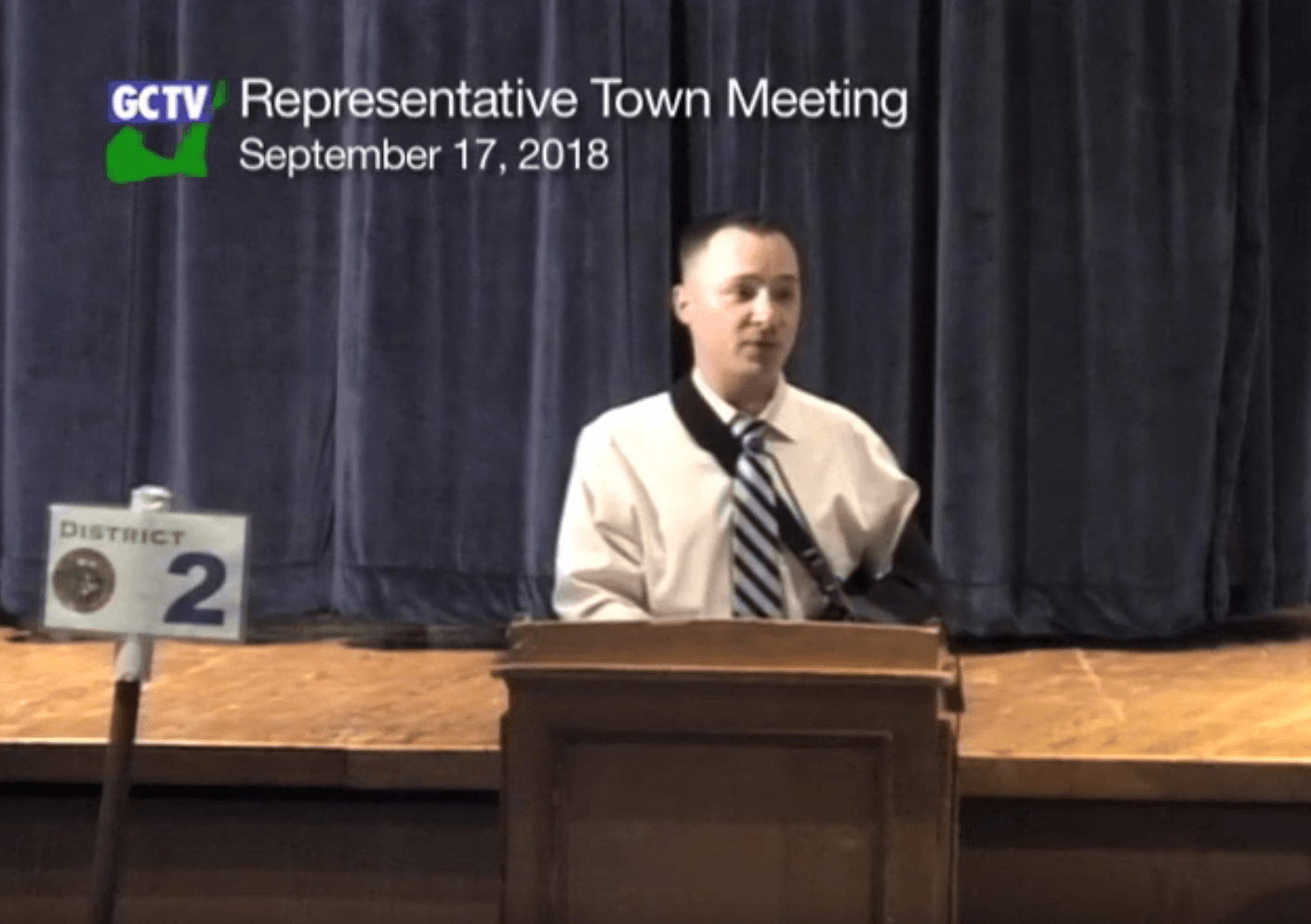 “I take responsibility for the comments on social media,” Medina said. “I am very passionate about the things that I believe in, but I understand the words I used in this instance were insensitive and offended some people. For that I apologize. I will use this as a learning experience,” he said.

Medina added that he would try to be more diplomatic and cognizant of his choice words.

“My comments, while insensitive, are not an accurate representation of who I am as a person, nor will they prevent me from making decisions that will better the lives of all people regardless of their political persuasion,” he said, adding that his background makes him empathetic.

Medina said he is half Puerto Rican and his wife is Hispanic, and this his single mother worked hard to bring him and his brother to Byram. Medina said shortly after arriving in Byram he realized there was a great need for support services.

“That’s why I was so excited when Peter Tesei asked me to join this board,” he said, adding that board works with community partners to address domestic abuse. He said in the last year they have a new partner, New Covenant House, who works with undocumented residents to help them become citizens. Also, he said the board works with the Prevention Council. He then listed volunteer jobs he has had including working at the YMCA after school program during college.

“Serving on the board is not just volunteer opportunity for me,” Medina said. “This is something I believe in, feel deeply about and deeply in my soul.”

Medina said the board works collaboratively regardless of members’ individual political persuasions.

“I believe I’m not only uniquely qualified for this appointment, but I’ve also proven by my service over the last two years that I’m capable of performing the duties you are entrusting me to do,” Medina said.

First Selectman Peter Tesei, a Republican, referred to the incident as a teachable moment, and said Medina’s mistake doesn’t take away from his overall body of his work.

“We want to create a culture in Greenwich that’s different from the rest of American and the rest of the state,” Tesei said.

Selectman Sandy Litvack, a Democrat, said he was very disturbed by Medina’s comments.

Litvack said he was pleasantly surprised to learn how young Medina is, “Because he has a lot to learn,” he said.

Litvack said Medina had called him earlier in the day.

Litvack said that at the end of the day he agreed the incident was a teachable moment. “He’s a young man. He’s done a lot of good.”

Next to comment was Laura Kostin, RTM member in district 8, and Democratic candidate for State Rep against Republican Fred Camillo.

Kostin said that although she was the one to raise the issue of Medina’s comments in the first place, “I did not go looking for it. It found me. All I did was click on a Greenwich Free Press article.”

She said the RTM should not be a rubber stamp on appointments, and questioned the vetting process.

“If you come before this body for a vote, it would be wise to refrain from inflammatory discourse,” she continued. “If you’re going to be serving the neediest in our community, you should strive to create an atmosphere of tolerance and inclusion, regardless of political affiliation. And if you are going to represent our town you would do well to avoid alienating the public and refrain from needlessly divisive commentary in public forums.”

Dawn Fortunato, RTM district 3, said she shares 40 mutual Facebook friends with Mr. Medina, including family members, and that she would not forget Medina’s post listing names of candidates who he thought were Democrats affiliated with March On Greenwich or Indivisible Greenwich, and saying in comments they should not be voted for.

She asked whether constituents would feel comfortable reaching out to Medina for help if they knew about his inflammatory comments, even though they were deleted.

Samarpana Tamm defended Medina. She insisted the RTM is not a rubber stamp and that Mr. Medina had been thoroughly interviewed by multiple groups. She said she’d known Medina since he was 12 years old and that he was always kind and polite. “We do not share the same political values,” she said.

Peter Berg from District 8 said he’d learned about Medina’s comments from Ms. Kostin who had been originally motivated to run for RTM in response to actions and language from another district  8 member.

Berg said John Eddy who leads the appointments committee was not aware of the comments when they considered Medina. Nor was  Alexis Vulgaris’s Health and Human Services committee when they interviewed the nominee.

Berg suggested the item be referred back to the appointments committee.

He said he’d met Medina a year earlier at a town meeting, and been taken under Medina’s wing.

“Since then Jeff has contributed to the growth of the GHS Young Republicans Club.” Fernandez said Medina should not be judged on “a couple of Facebook posts that could have been worded better.”

Ed Dadakis also defended Medina. “He’s young, intelligent, personable and is exactly the type of person who should be engaged in the town. “It would be a mistake for Greenwich not to have his commitment and dedication on the board of Human Services.”

Anthony Lopez, RTM district 1, who described himself as bleeding all kinds of blue, said Medina’s comments were “beyond the pale and divisive.”

“It is my distinct hope that Mr. Medina will think about what comes out of his mouth, either in a private conversation or in a public forum like Facebook,” he said. “I think we should give him a chance.

Final Vote for Medina was 135 in favor 47 against 9 Abstentions.