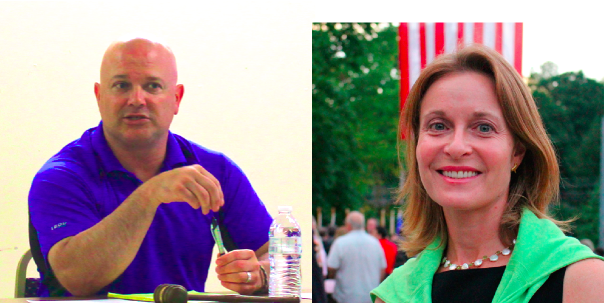 On Wednesday, October 15, Old Greenwich residents will have the opportunity to hear directly from the two candidates vying for the open 150th state legislature seat this fall. As one of only two in-town debates scheduled, this dialogue is guaranteed to take on a very local tone.

“The questions that will be asked are being culled from letters, phone calls, conversations and questions that residents have been asking of our Board,” according to David Rafferty, president of the Old Greenwich Association. “They say ‘all politics is local,’ and what we intend to do during the debate is boil larger state issues down to a local level.”

For Democrat Jill Oberlander, a lawyer and consultant, this is not her first election, having served on the Greenwich RTM for three terms. Republican Michael Bocchino is seeking his first elected office having recently served as chairman of the Byram Neighborhood Association and New Lebanon Elementary School PTA president.

“The candidates bring very differing backgrounds to the table, and our residents deserve every opportunity to determine who they believe will serve them better in Hartford,” says Rafferty. The debate is scheduled to begin around 8:15pm at the First Congregational Church in Old Greenwich, and will be moderated by award-winning News 12 reporter Courtney Kane.

In addition to the debate, Greenwich’s newly promoted Director of Planning & Zoning, Katie DeLuca will be on hand to present an update on the development of the Old Greenwich/Riverside Neighborhood Plan. The plan is intended to help guide future development instead of simply reacting to it. Through public input and working closely with local stakeholders, the goal is to come up with a holistic vision for the future for the eastern side of Greenwich.

The Old Greenwich Association annual meeting will be held at First Congregational Church, 108 Sound Beach Avenue, starting with coffee and conversation at 7:00 p.m. The business meeting and Neighborhood Plan presentation will kick off at 7:30 p.m. All are invited to attend and admission is free.

The Old Greenwich Association is a local-residents association with a volunteer board whose key objective is to monitor quality of life issues in Old Greenwich. The association has been involved in community activities for over 40 years.