On Thursday DPW Engineering Division civil Engineer Sean Cardwell and Deputy Commissioner James Michel presented the reasoning for a proposed removal of 21 trees surrounding the stone bridge at Pomerance, as well as in the downstream area.

Though the hearing was convened by the Tree Warden and was ostensibly about trees, residents in the packed Parks & Rec conference room were surprised to learn the reason for removing the trees is for a large upgrade of the dam.

Most were caught unawares that the bridge  is in fact integrated into a dam that falls under the auspices of the DEEP who want it upgraded.

Mr. Michel said dams come in a variety of forms.

“A dam isn’t always just like the Hoover Dam with a concrete structure,” he said. “In this case it’s the entire embankment.”

Mr. Michael said there are a hundred different dams in Town, and are all regulated through DEEP. 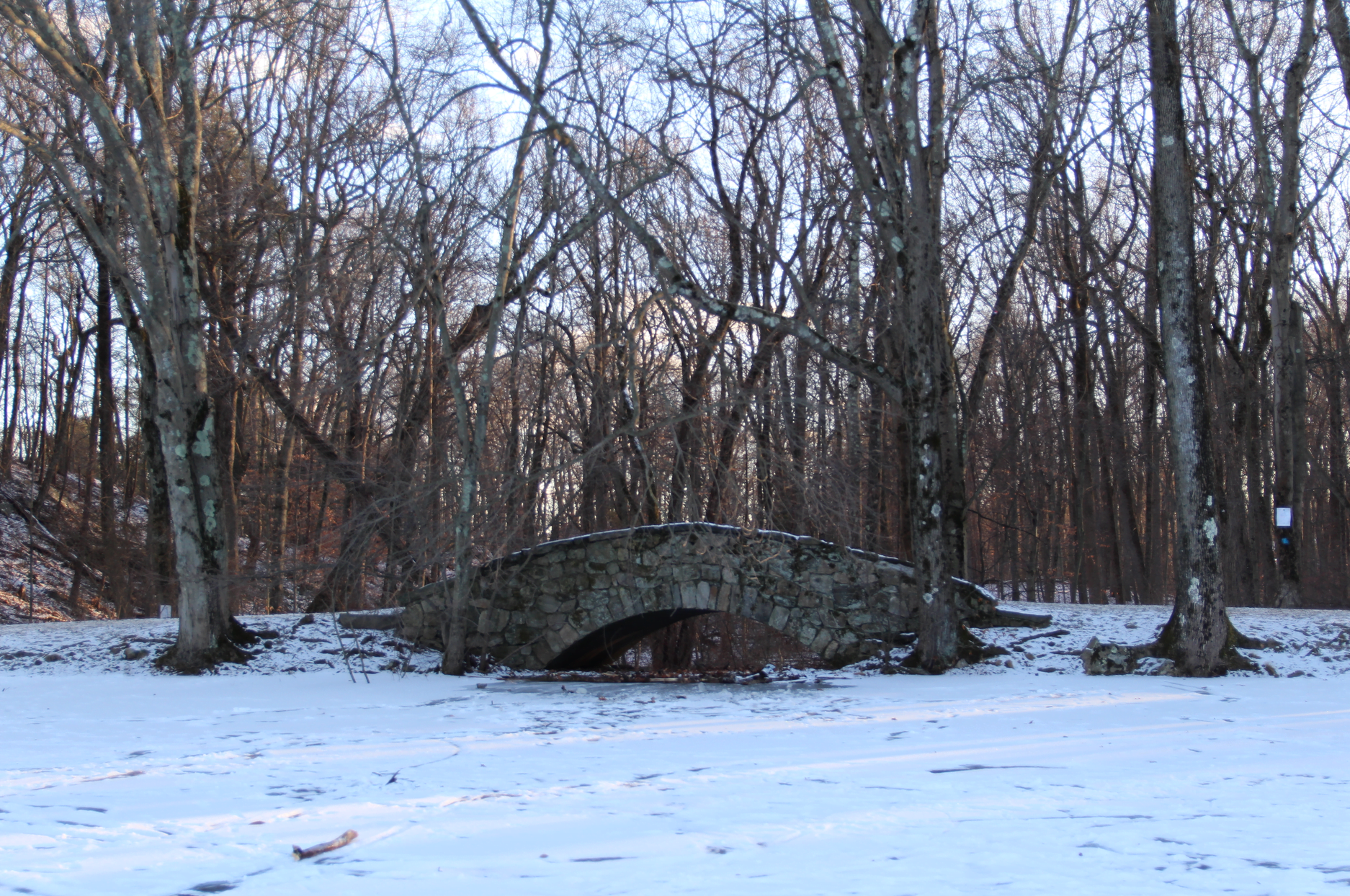 For example, up on North Street by the reservoir, from the Merritt and up the hill past the fire house, he said, the entire embankment is considered a dam for the reservoir. “It’s all a regulated dam through DEEP,” he said.

The proposal for Pomerance includes building a concrete basin and replacing the dirt edge and back slope of the pond with industrial rip rap.

Mr. Cardwell said the idea is to prepare for a 100 year storm.

In 2007, water from the dam spilled over. “That’s why we’re going so far with the articulated blocks filled with gravel,” Cardwell said. “When the trees are removed, we’ll put in a retaining wall and rip rap. We’re putting in concrete, but will make it naturalistic and the bridge will look much like it does today.”

John Eddy, RTM district 8 in Cos Cob said he appreciated that if one tree comes down in a storm it could take out the whole dam, but that environmental and aesthetic issues were valid.

Tree Warden Bruce Spaman said he had issues with the industrial look proposed.

Environmental attorney Betsy Burleson, who walks the park herself frequently, was alarmed the by proposal for a variety of reasons.

She suggested that the Federal Endangered Species Act might supercede the CT DEEP. She mentioned Bog Turtles and Spotted Salamanders specifically.  The DPW engineers said the plan is to “replant” at the end of the project, but Burleson said it will be very difficult to get anything to grow in that area.

Mr. Cardwell said DEEP insists the town  has to take the trees down. “We will restore the area the best that we can,”he said. “We’d go to Wetlands to determine what goes back in.”

Ms. Burleson questioned a plan to replant with native grasses. “This is inland woodlands. There is a real need for a more comprehensive study as opposed to thinking that slapping some seed down that would regrow properly,” she said. “I just don’t think you’re going to get much to regrow. There’s a lot of bogland in there. It is the default perspective: all trees have to go on all dams.”

Local attorney Alex White who also walks the park frequently, said the park is already being “beaten down” due to its increased popularity. He expressed concern that unforeseen consequences might result in the bridge needing to be replaced.

“The bridge as much as the trees defines the character of the park,” White said. If you change the bridge, the neighborhood will go berserk because that is a landmark. Whatever you do, that bridge can’t change.”

In response, Mr. Michel said that the bridge/dam structure protects all of Cos Cob south of the pond. “We have to do our maintenance on our existing infrastructure,” he said, likening the dam to roads and bridges. “It’s a liability issue.”

Andy Chapin, chair of the RTM parks & Rec committee described Pomerance as the keystone of the passive parks in Greenwich.

Elizabeth Dempsey, a resident of central Greenwich, said the proposed changes for the dam and the removal of trees will actually change how residents use the pond. She suggested covering over the rip rap and plant on top of it.

Francia Alvarez of the Greenwich Tree Conservancy pointed out that the DPW’s diagram indicated the trees to be removed, but not the trees to remain.

“The map is inadequate for the regulations of the town of Greenwich. Five years out, the other trees that have their roots disturbed will die,” Alvarez warned.

Ms. Burleson, the environmental scientist, said there might be toxic fill in the area. “That is an unstudied issue,” she warned.

Mr. Cardwell said the DPW hopes to be able to leave the bridge open for access to the park “as much as possible.” Mr. Michael said in terms of equipment people should anticipate seeing an excavator like a typical backhoe.

As for a timeline, he said they hope to start in summer or fall of 2018 and finish within three to six months.

Tree Warden Mr. Spaman said he will prepare a written final decision within 3 days allowed by statute. He said anyone aggrieved by his decision can appeal to Stamford Superior Court. 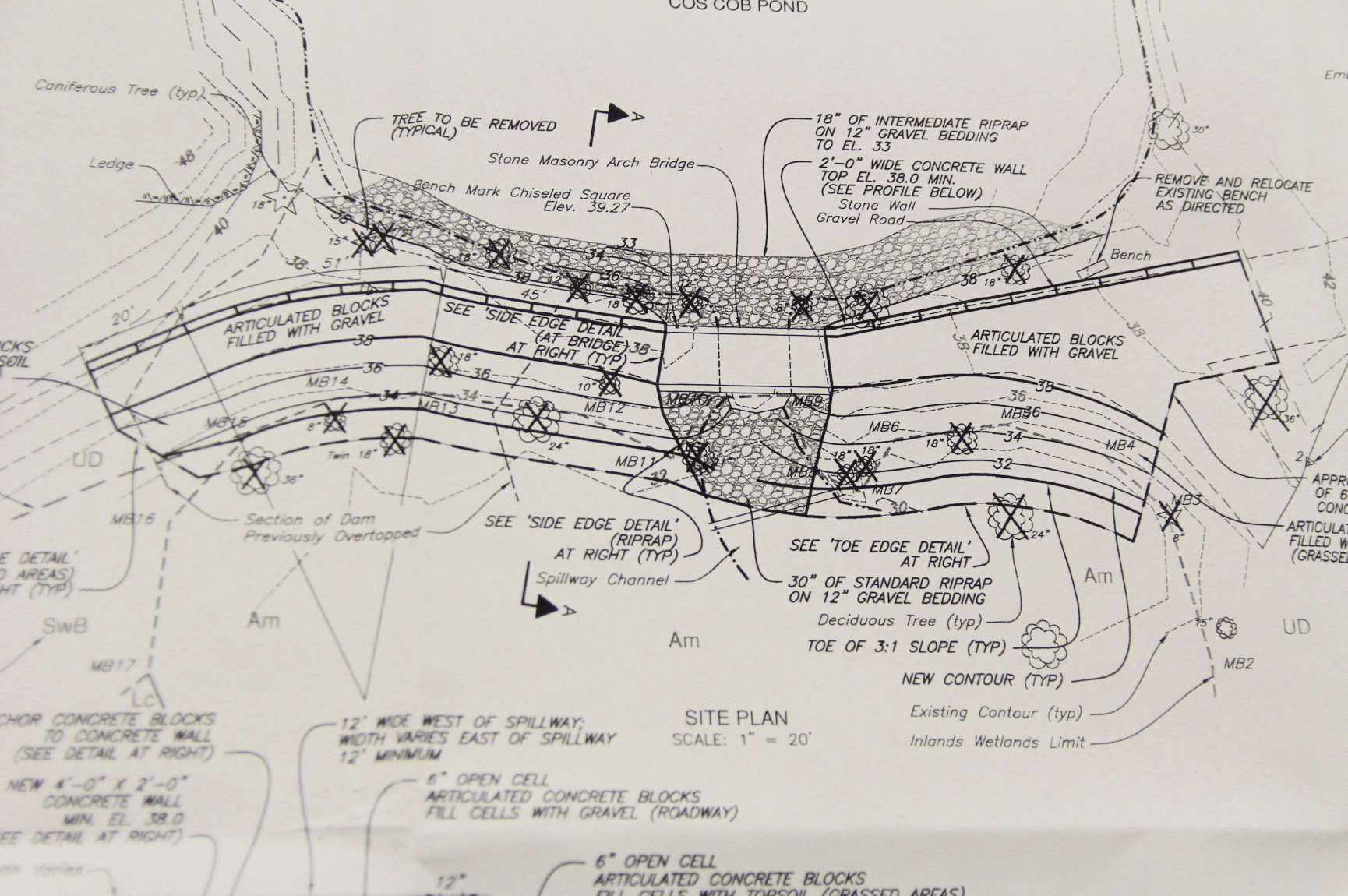 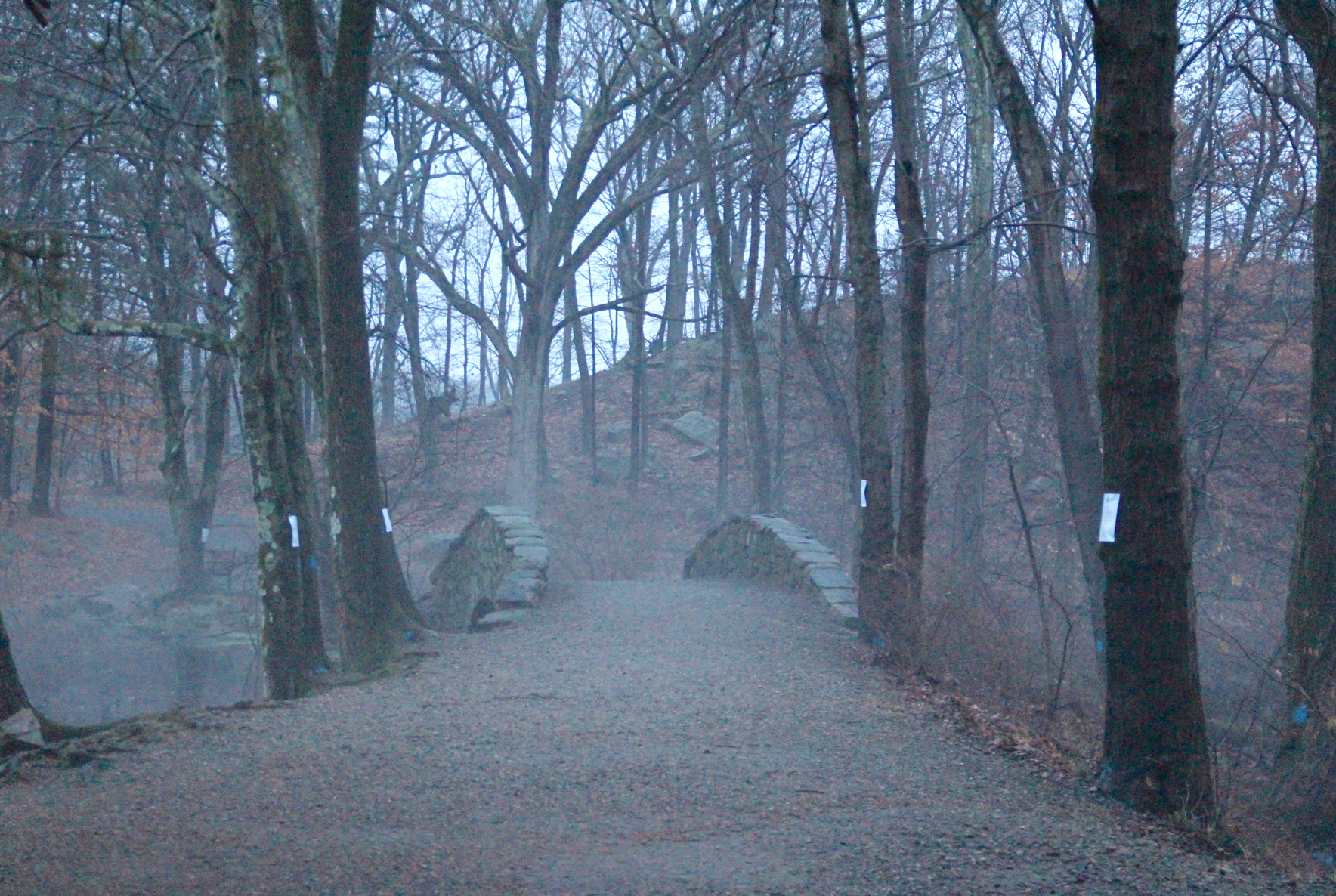 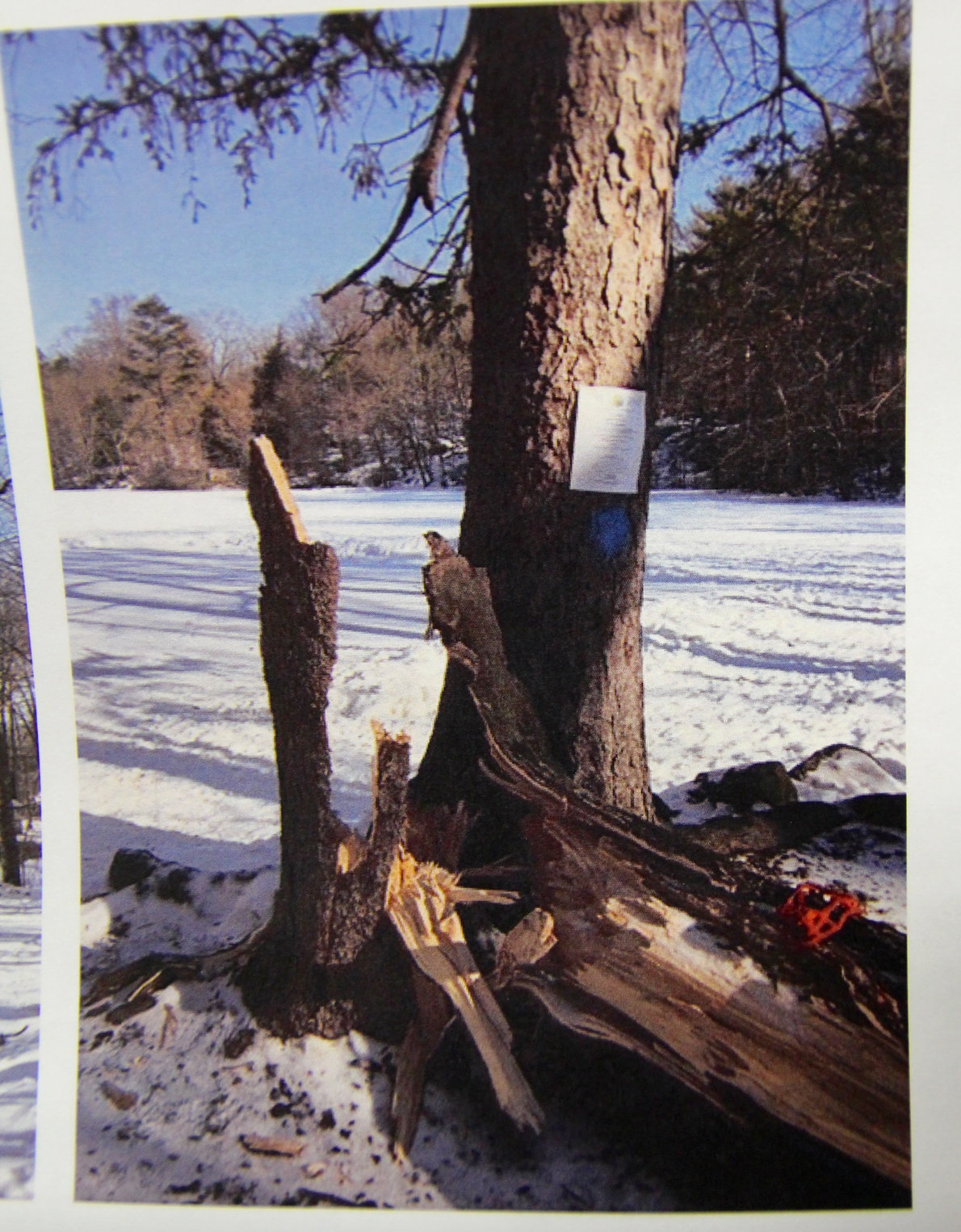 Photo of a tree at Pomerance that came down during the severe wind and cold in early January 2018. The tree was one of the 21 proposed to be removed by the Town in a project to upgrade the dam. The project to comply with DEP, and is to be funded by Greenwich.