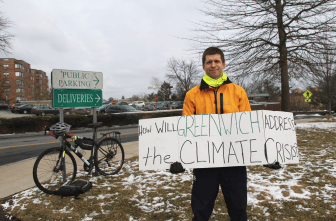 Students and teachers from the Greenwich Country Day School are organizing a march from the GCDS fields on Fairfield Rd to the Greenwich Town Hall on Friday morning, March 15.

The goal is to raise awareness and show support for actions to address climate change. GCDS teachers and staff will accompany 6th-9th grade students along a 2.5 mile sidewalk route from the school to the Greenwich Town Hall.

This Greenwich march is part of a global “Fridays For Future” movement that began last August when Swedish 9th grader, Greta Thunberg, inspired by the Parkland High School students’ March for Our Lives, sat in front of the Swedish parliament building on a “School Strike for Climate.” “I was inspired that Greta made a difference, even though she is only one person,” said Bridget Brockelman, GCDS 8th grader.

The movement has taken off with marches around the world. Student demonstrations have occurred in 270 cities in Australia, Austria, Belgium, Canada, Colombia, Denmark, Finland, France, Germany, Ireland, Italy, Japan, the Netherlands, Norway, Switzerland, Uganda, the UK and the US. The largest coordinated student march to date occurred on February 2nd when an estimated 65,000 students demonstrated across Switzerland. The Fridays For Future website lists 716 marches in 72 countries planned for March 15th, including 86 marches in the United States. Students, primarily middle- and high-schoolers, are demonstrating for action to reduce emissions, such as 100% clean energy by 2030.

Student activists at the United Nations meeting in Poland last December cited the recently released Intergovernmental Panel on Climate Change report as an urgent call for governments to act. The IPCC report forecasts that the impacts on people and nature will be extreme, and that we risk runaway warming, beyond a 2.7°F rise in average annual global temperature. It also states that at current emissions levels we will pass this threshold in approximately 12 years. Notable scientists have expressed support for the international student marchers. In January, 3,400 Belgian scientists signed an open letter addressed to their government, while last month 350 Dutch scientists and 224 British academics did the same in their countries.

At GCDS, a team of teachers and eleven 8th graders are organizing the Greenwich march. “We are putting together this march to raise awareness about what is going on in our world, and we hope to make an impact on our representatives so that they can help us help the world,” explained Evie Offit, 8th grade team member.

The team has reached out to Republican and Democratic elected leaders inviting them to appear with the marchers at the Town Hall at 10:00 a.m. on March 15. First Selectman Peter Tesei, State Senator Alex Bergstein, and State Representative Livvy Floren have accepted invitations and applauded the students’ engagement.

“Everyone we speak to says they are excited that the kids are taking action for an issue they care about,” said GCDS Community Service program director Jen Donnalley.

Students from Greenwich public and independent schools are invited to join the march.

The student organizers anticipate an enthusiastic and purposeful atmosphere for the march.

As student team member Tessa Pascarella put it, “We are responsible for our future. I have seen the effects of our behaviors, and now is the time to change. Adults in power are not doing enough. I hope that kids and adults in our Fridays for Future march realize that they have a powerful voice which they can, and should, use.”

“Even if only 10 people come march with us, I will still be happy because I will know that we will have made a difference,” concluded GCDS eighth grader Evie Offit.