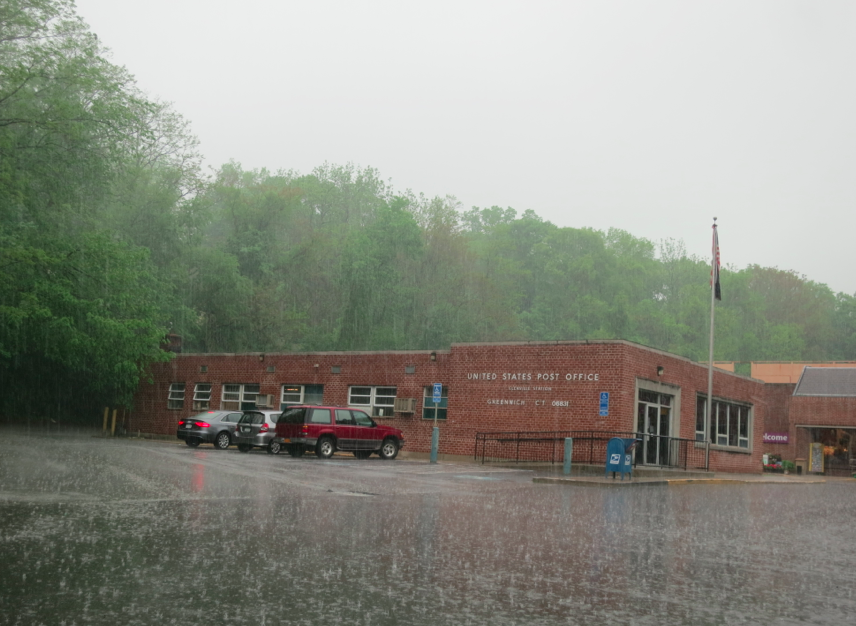 By Leslie Yager
The USPS may relocate from its longtime Glenville location at 25 Glen Ridge Rd as of October 2014.

The announcement was made by a representative of the US Postal Service, Joseph Mulvey at the May 22 Board of Selectmen meeting.

Mulvey, a real estate specialist for the US Postal Service, said the USPS has been at 25 Glen Ridge Rd since the early 1960s.

“But regrettably, our landlord informed us it has other plans for the building. We are here to discuss that process. However, the landlord has, this week offered us a proposal to stay in the existing building,” Mulvey said.

“While we are discussing that possibility, without a signed agreement in hand, we must explore the possibility of moving,” Mulvey said.

Mulvey said if the Post Office moves, they will seek 1,000 square feet of space and that the building would need two entrances — one for mail to come and go out, and a separate customer entrance. “We would look for a slab on grade with a scissors lift or dock for mail to come in from trucks,” he added.

“It is our intent to keep a post office in the Glenville area,” Mulvey said. “We received a proposal from our landlord this week and we will follow both processes simultaneously.”

Mulvey said the current lease expires at the end of October 2014.

Landlord’s offer to reconfigure the space for a smaller post office
On April 8, a final application for alterations to the building submitted to Planning & Zoning from John Heagney, authorized agent for Sutton Properties, LLC, states, “Applicant proposes to reconfigure existing post office building at 21 Glenville Street into four retail spaces, one of which will be occupied by the post office.”

An Affidavit of notification of final site plan notification reads, in part: “…to reconfigure the existing post office space into a new, smaller post office, along with three additional retail stores has been filed with Greenwich Planning & Zoning Commission.”

The site plan application for alterations to the building at 21 Glenville Street does not include an increase in lot coverage or floor area. Nor do they include change to the number of stories or building height. The proposal includes re-striping of the parking lot to add six new parking spaces for a total of 114 + 5 handicapped parking spaces. It currently has: 108 + 5 handicapped spaces. The architect for the alteration project is Rudy Ridberg of Ridberg & Associates.

Sutton Properties, also owns the building that houses Stop & Shop as well as a row of businesses including Glenville Photo.