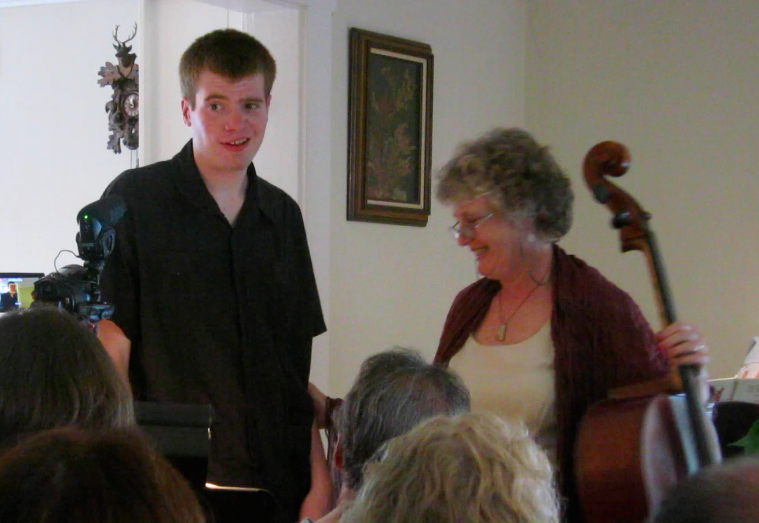 The Arezzinis of Cos Cob have touched the lives of hundreds if not thousands of Greenwich students.

The married Julian Curtiss School teachers have taught in Greenwich Public Schools for decades. The couple’s autistic son Karl, 23, a gifted cellist, has entertained residents and even played at Carnegie Hall. His sister Rose, a college student who, plans to make a career of music therapy. 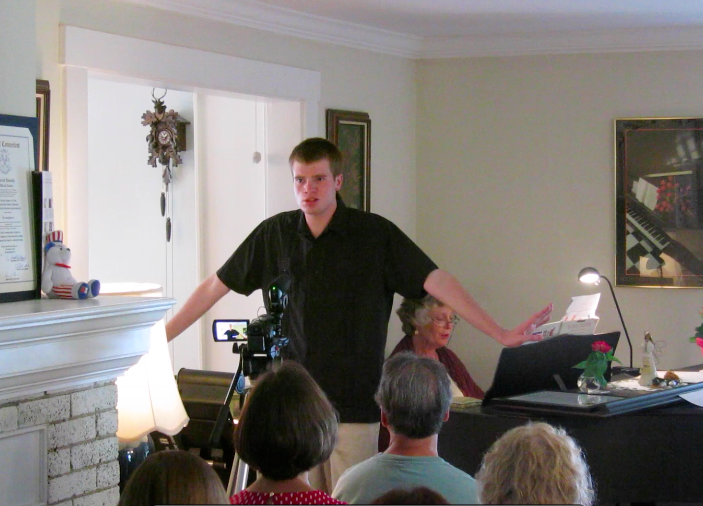 Known  by JC students as “Mizz Arndt” and Mr. Arezzini, the teachers have taught countless children, and in turn, Greenwich families have watched Karl and his sister Rose grow into young adults.

On Saturday June 26, parents and their adult children with disabilities gathered at the Arezzinis’ Orchard Street home in Cos Cob to share personal stories with the media and elected officials. The stories illustrated the impacts of funding cuts at the state Dept. of Developmental Services (DDS).

Parent after parent described how even modest assistance makes an immeasurable difference in quality of life and the ability to live independently.

For one adult child, the assistance that made the difference was simple help balancing a check book.

Arndt said that Karl has a cello teacher who comes to his apartment. “That’s what he uses some of his SSI money for,” she said, as her son prepared to perform on his cello and sing for the crowd gathered on Saturday. 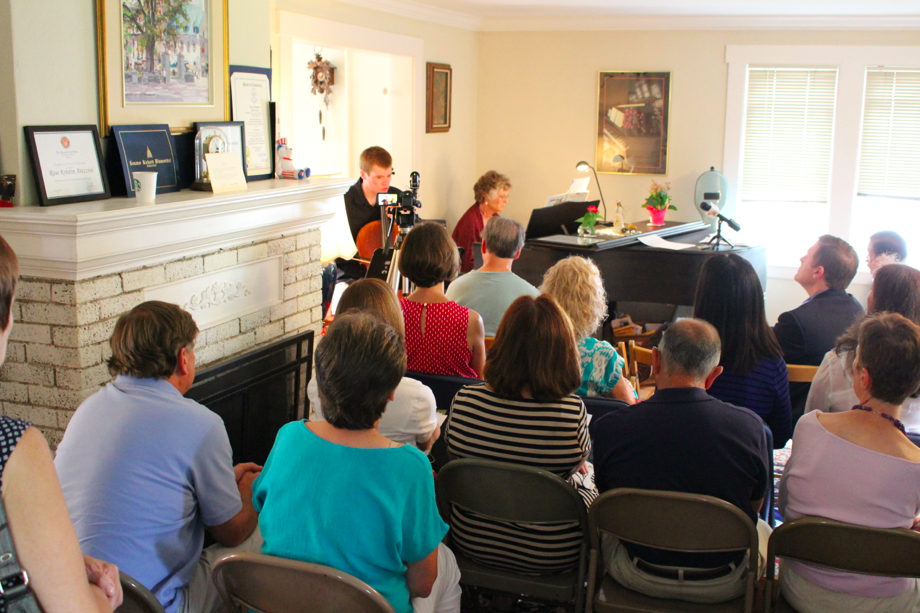 “Bringing adults with disabilities home after they have been successfully living in the community is not only cruel, it is a huge waste of the investments the public schools, DDS and families have made in these individuals over the years,” Arndt said.

The Arezzinis’ son, Karl, may have to leave Chapel Haven in New Haven and return home to Cos Cob if funding for the program isn’t re-established. Currently his school teacher parents are running down their savings to pay out of pocket for his services.

Chapel Haven residents receive training to use the local bank, laundromat and supermarket, according to Arndt. “It’s a win-win,” she said of benefits to residents and local businesses. 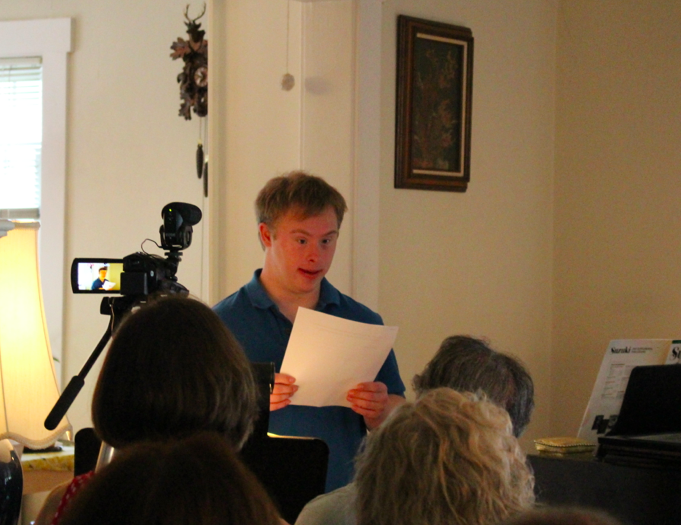 Justin Lewis said he may have to move back home, but doesn’t want to. Credit: Leslie Yager

Justin Lewis, 23, has Down Syndrome. He addressed dozens of families gathered at the Arezzinis on Saturday and said he had represented his peers in a rally in Washington to restore Dept of Developmental Services cuts.

“I have a new life in New Haven, I have a lot of friends…I know how to get around. But even with everything I can do, I still need help,” he said. “DDS wanted me to move back home,” he said referring to the result of the cuts. “This is not something. I want to do. My life is in New Haven.”

Justin’s mother, Lauralyn Lewis introduced herself as a single parent whose husband died of cancer.

“I need to prepare him for life should something happen to me,” Lewis said. She described Justin is the product of Birth-to-Three and the federal program IDEA, and Chapel Haven in New Haven where Justin has lived for three years.

“The problem is he has money allocated for vocational, but he does not need it,” Lewis said adding that the system doesn’t allow that funding to be moved to where her needs it. “It’s dollar for dollar what he needs for that oversight. If something happens to me, there is nobody to step in and take care of him.”

“Why are we spending money to educate these individuals? Why do we have special ed budgets if when they graduate, age out of the system, they go off the cliff because DDS is not set up to do what they are supposed to do.

Why do we have government if not for helping the least in our society? We presently spend more money helping prisoners in the state of CT, and they get a lot of perks our kids don’t even get. And they have chosen to commit crimes. Our children were born with disabilities. They have worked very hard to reach whatever level they can. The parents have supported them.”

– Lauralyn Lewis, single parent of 23-year-old Justin who has Down Syndrome 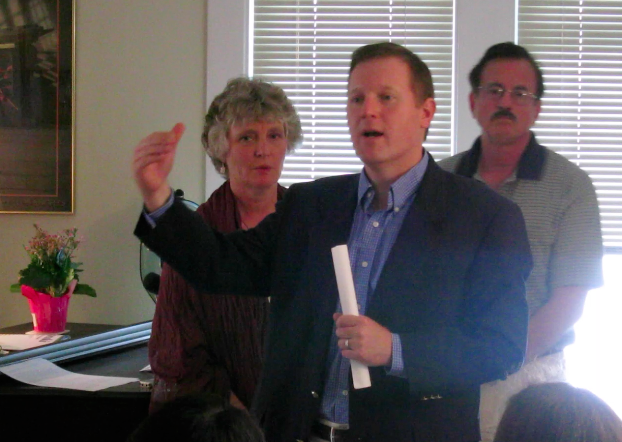 Steve Walko (R-Dist 150) said he objected to Republicans being labelled as strictly out to cut spending.

“Our spending is out of line in Connecticut,” he said, but he added that being a fiscal conservative makes him think harder about services provided.

“You have to take a look at this from a holistic point of view, and certainly you have made your case,” he said to the parents and their adult children with disabilities.

“Our job is to show the government not only where to save money, but where to prioritize the money.” – Steve Walko (R-Dist 150) 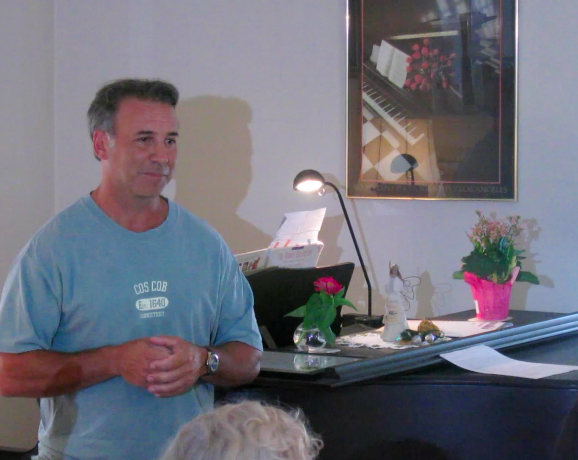 “The one thing government should do is protect the most vulnerable people, and animals that can’t protect themselves,” State Rep Fred Camillo (R-Dist 151) said.  I am a member of two caucuses up there, and now it will be three,” he said. “I look forward to it in January, God willing.”

After State Rep. Livvy Floren (R-DIst. 149) said she would join the caucus, Arndt threw her arms up in the air. “What a birthday present for the ADA!” she said. 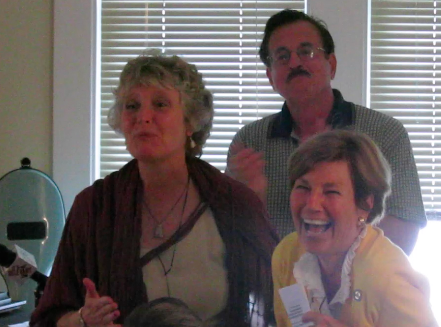 Saturday was indeed the 23rd anniversary of the Americans with Disabilities Act, the law aimed at eliminating discrimination against people with disabilities and ensuring equal opportunity in employment, government services, public accommodations, commercial facilities and transportation.

Floren said part of the challenge is that there are “so many acronyms,” and agencies with overlapping responsibilities. “We’ve been spending a whole lot of money the technology to help us with coordination, lack of duplication and following our most vulnerable citizens so they get the services they need.”

Several parents lamented that in 2012, $30 million was cut from the state DDS budget, and though this year $5 million was added back, they said they are still plowing through their savings to keep their adult children with independent living.

Navigate to Advocate
Lolly Ross of Abilis in Greenwich and Lara Shepard-Blue  of Our Families Can’t Wait said there is a family  forum scheduled for Saturday, Oct. 4 in the community room at Cos Cob Library from 10:00am – 12:00 noon. Our Families Can’t Wait is organizing for housing and support for people with intellectual and developmental disabilities. According to the group, “A fully funded DDS system will ensure a sustainable future, not an endless wait list and a race to the bottom.”

Ross said that funding cuts have happened precisely because  there hasn’t been an organized group of families speaking out. “This legislative session we had more families at the capital than has ever happened and we want to build on that,” Ross said.

“We really believe there needs to be a full spectrum of services to meet the needs of everybody who has intellectual and developmental disabilities in the state. That will only happen by people making their case to legislators, telling your own stories.” – Lolly Ross of Our Families Can’t Wait

On Wednesday, Sept. 10 there is a parent forum hosted by Abilis and The Arc Connecticut at Stamford JCC. The forum will help families understand the legislative process and contact legislators.

Chapel Haven offers transition programs for adults 18+ on the autism spectrum and those with developmental and social disabilities. More information on Chapel Haven is available on their website.