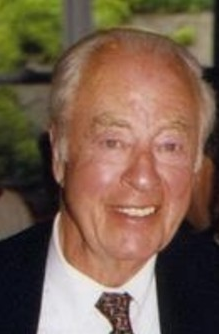 Rowland D. “Mike” Harris, age 91, a life-long resident of Greenwich, died peacefully at Greenwich Hospital on Friday, July 25, 2014, after a brief illness. He was surrounded by all of his loving family.

Mike was born on April 19, 1923 in Greenwich, Ct., to Sam and Edith Harris. He attended Cos Cob School and Greenwich High School, graduating in 1940.

In 1942, at the age of nineteen, he volunteered and enlisted in the US Army.  He was a proud patriot and served in World War II with the 96th Signal Battalion in the China-Burma-India (CBI) theatre of war.

Mike worked as an electrician for the former Electrolux Co. in Old Greenwich, as an insurance agent with the former Metropolitan Life Insurance Co, and then with his late brother, Griff, at the Griffith E. Harris Insurance Co.

He is best known, most recently, to many people as the former Town Clerk of the Town of Greenwich, and also as far and away, the top vote getter on the Republican ticket each of the six times he ran for office.

Mike was an avid volunteer in numerous church, civic and charitable organizations for many years: an usher at the St. Catherine of Siena 9:00am Sunday Mass for over 60 years, 50 plus years including Past President, with the Cos Cob Fire Police Patrol.

A most active member of the Retired Men’s Association (RMA), a Red Baron escorting patients and serving the coffee cart at Greenwich Hospital, Meals on Wheels, Cos Cob Republican Club, Republican Town Committee, Harpoon Club, Melody Men, Glenville Seniors, Social Seniors, American Legion and the veterans of WW II CBI group.
The most important thing in Mike’s life was spending time with his family. He also enjoyed golf and he loved to sing. In fact, any chance he had, he would grab a microphone and sing his renditions of “Hello Dolly”, “I Left My Heart in San Francisco” and “The Wind Beneath My Wings”.

Arrangements are being made by Knapp Funeral Home, 267 Greenwich Ave. where the family will receive friends on Wednesday, July 30, 2014 from 3:00pm to 8:00pm.

In Lieu of flowers, the family suggests donations to The Nathaniel Witherell, 70 Parsonage Rd, Greenwich, CT  06830