The athletic playing field at Cos Cob Park was dedicated to former State Representative Emil “Bennie” Benvenuto on Wednesday morning, and an enthusiastic crowd gathered under blue skies and puffy white clouds to recognize Mr. Benvenuto’s contributions to the Town of Greenwich, and reminisce a bit about a humble, self-made man.

Mr. Benvenuto who died in 2011 at the age of 80, served six terms as State Rep for District 151, the seat currently held by Fred Camillo.

Mr. Camillo said Mr. Benvenuto was key in the process of Greenwich acquiring the property that is now Cos Cob Park, as well as the pump house and Mianus Pond, the current location of Greenwich Adult Day Care, and that the town’s purchase of the Cos Cob Power Plant site was controversial at the time because the 13+ acres, which had a value of $40 million at the time, were known to be contaminated. 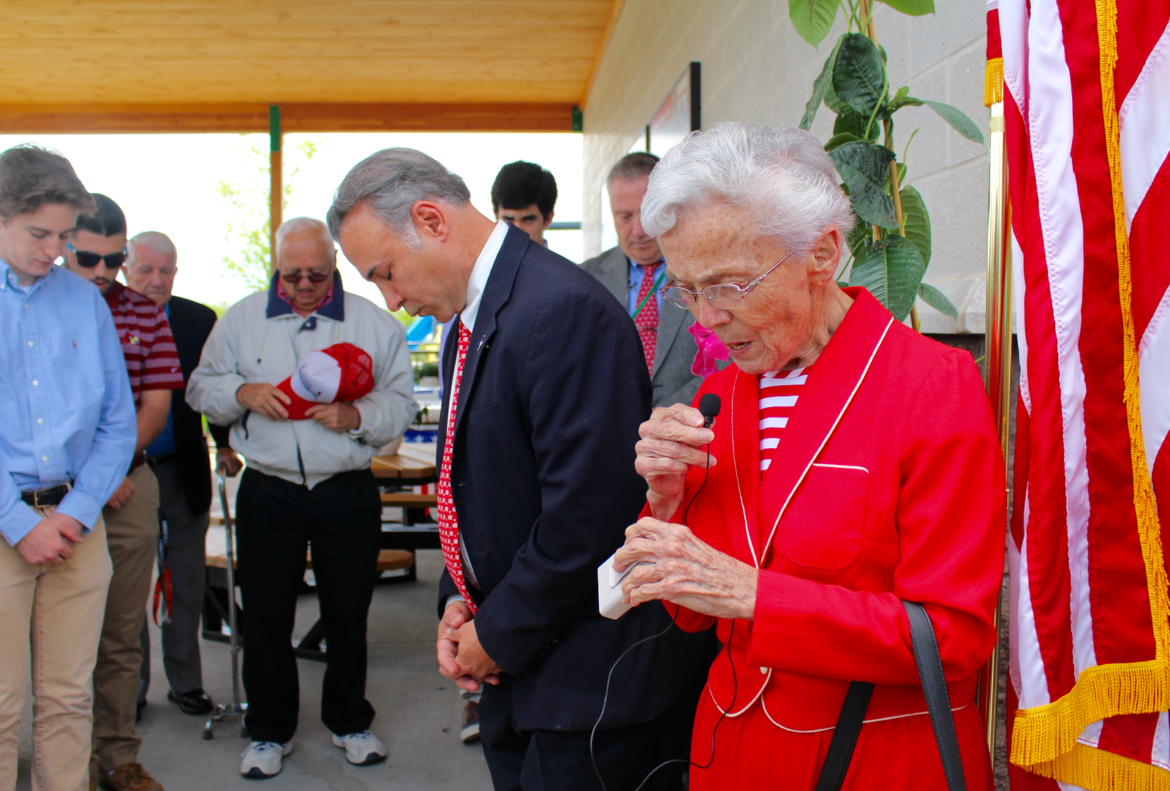 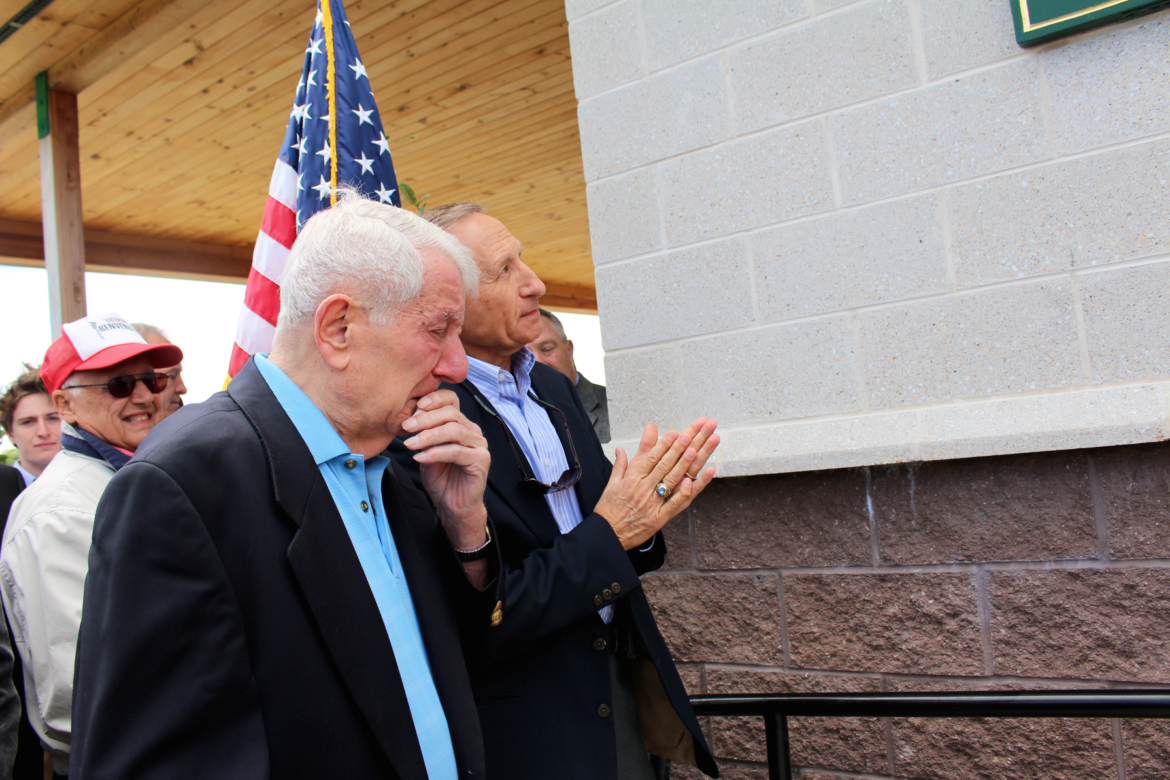 Camillo described Mr. Benvenuto as a great example of the American Dream. Having begun his working life as a door-to-door salesman for Fuller Brush. He then went on to start a wood refinishing business that was successful until he developed knee problems. Later, Mr. Benvenuto opened an independent liquor store, “Bennie Sez,” which he ran for many years. 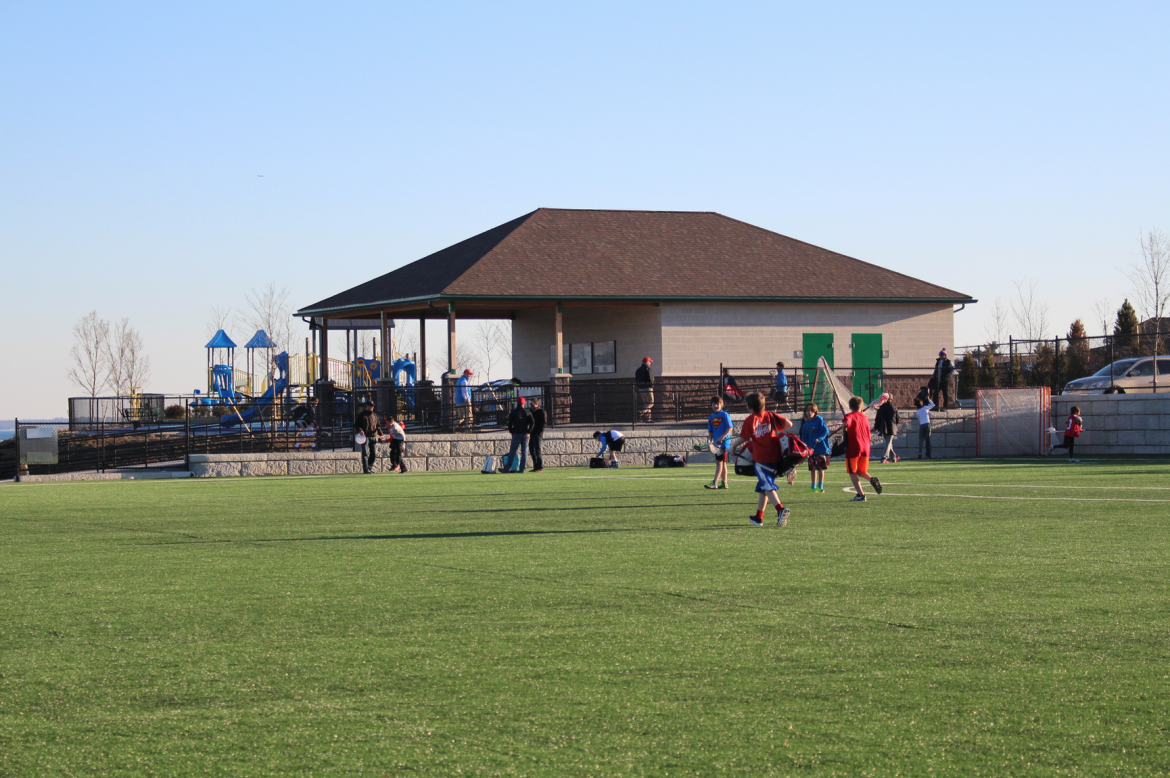 The turf field at Cos Cob Park was dedicated to Emil “Benny” Benvenuto on May 18, 2016 Credit: Leslie Yager 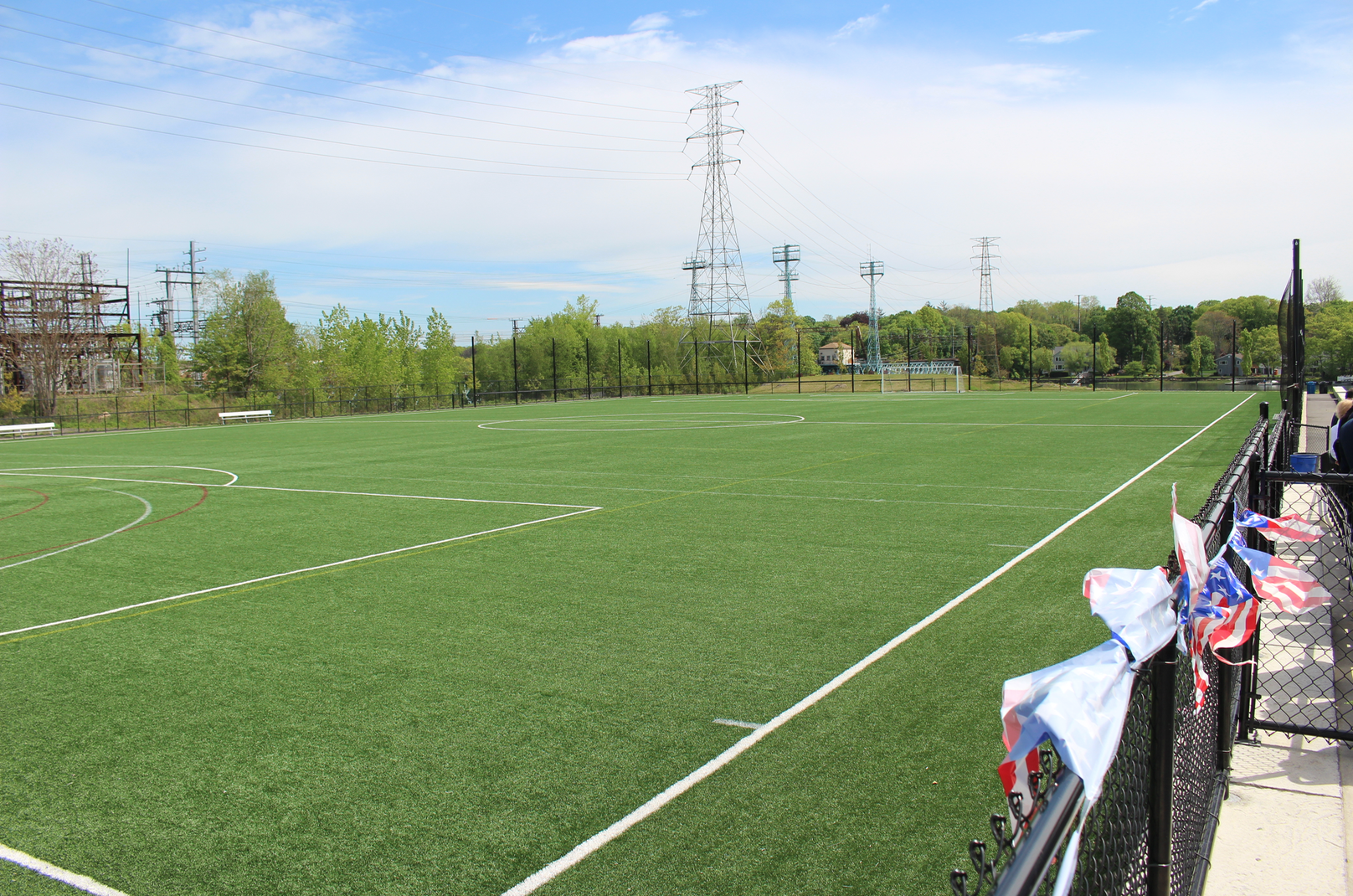 View of the “Benny” Benvenuto Field at Cos Cob Park on May 18, 2016 Credit: Leslie Yager

“Benny has the foresight, courage and determination to see it through, and for that we will always be forever grateful to Benny Benvenuto,” Camillo said.

Gus Bruno recalled arriving from Italy in New York Harbor as a first generation immigrant 58 years ago. “The first person  I met at the harbor was Benny Benvenuto, my first cousin,” he said.

“And the first thing Benny did – because it was a rainy, dreary, cold day – was take me and my sister to a store on Greenwich Avenue for a yellow slicker,” he said. “That’s Benny’s generosity. He never forgot where he came from.”

Mr. Bruno recalled how Benny got him a job at Lou Singer’s restaurant. “For one summer I washed dishes there thanks to Benny,” he said. “This is a great honor.”

Sam Romeo described Mr. Benvenuto as a renaissance man who had a vision for the 13+ acres of land at the Cos Cob Power Plant, plus pump house and Mianus pond.

“Without his vision and foresight, none of this would be possible. Benny was the kind of guy who never asked for anything in return and never wanted recognition,” Mr. Romeo said. “He’d just quietly go about the business of the state and helping people.”

Marion Robertson Benvenuto led a crowd of about 50 in prayer on Wednesday, during the dedication ceremony of the field at Cos Cob Park in honor of her late husband. May 18, 2016 Credit: Leslie Yager 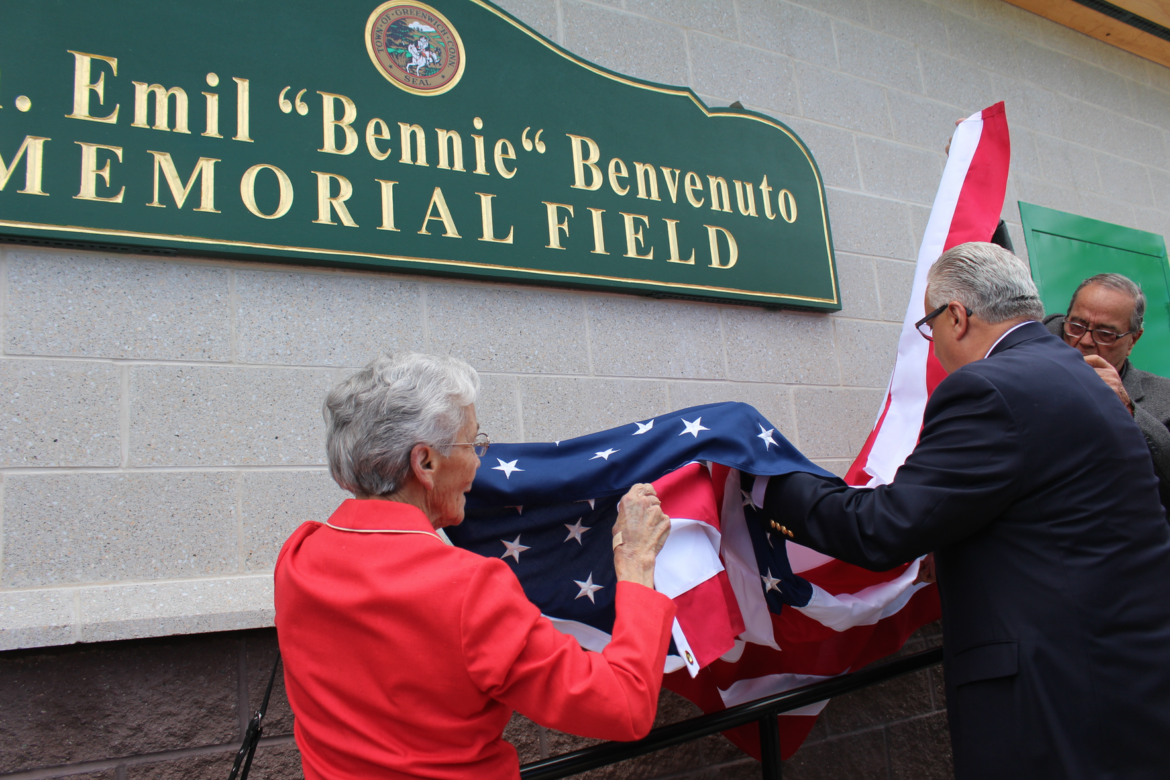 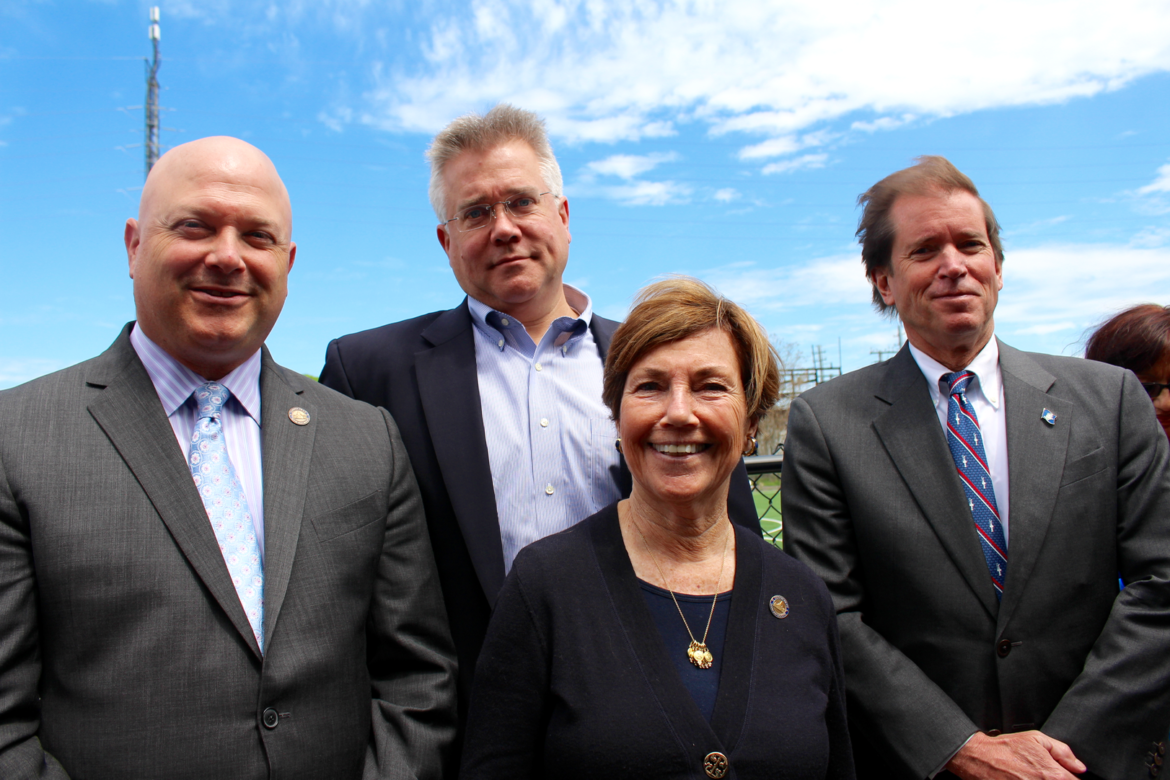