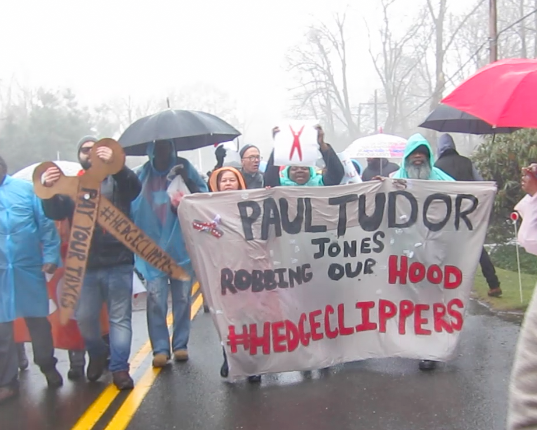 Three buses full of protesters arrived around 1:00pm at the Belle Haven gatehouse on Saturday. After gathering at Greenwich Library and walking down Greenwich Avenue in the pouring rain, the buses brought the group to the entrance of the private waterfront community.

While small rivers of rainwater gathered momentum along the curbs, engulfing sneakered feet, the enthusiasm of the protesters was not dampened. The bus loads of protesters traveled from New York City to voice anger over what they say is a rigged tax structure that has exacerbated income inequality and altered the political landscape in New York.

“We’re here to call out the hedge fund billionaires who have taken over New York state politics, and they’ve exploded inequality around the country,” said Michael Kink, of Strong Economy for All Coalition, who was organizing the crowd as they prepared to march down Field Point Rd to Paul Tudor Jones home on Field Point Circle. 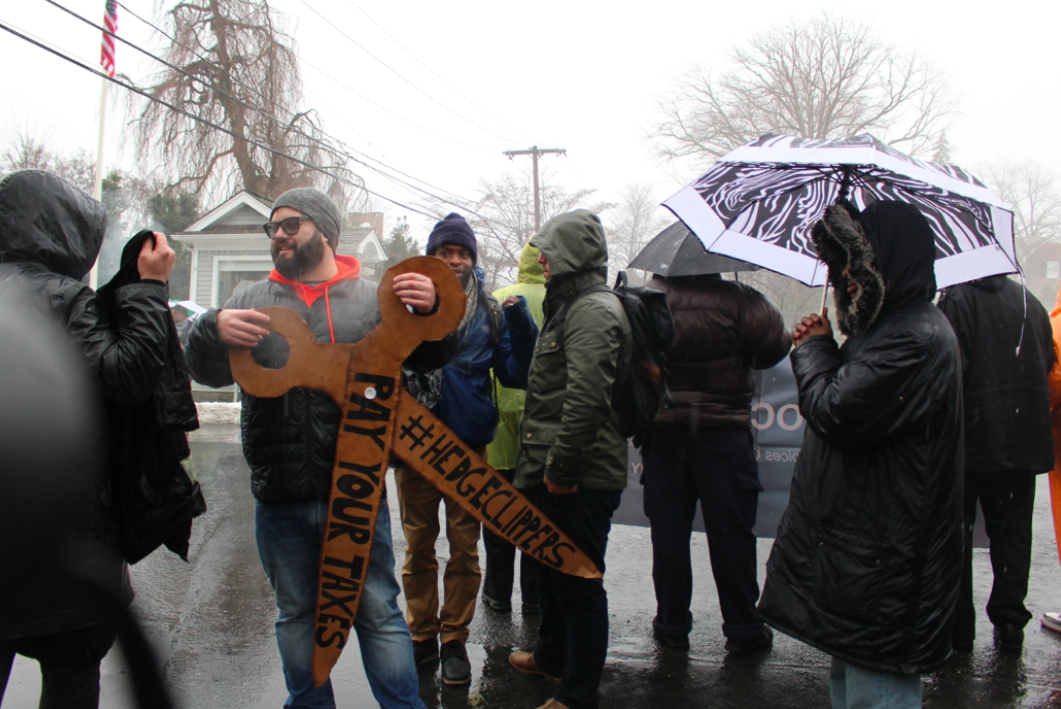 “The hedge funds are inequality on steroids,” Kink said.

“People are making fortune after fortune off of other people’s misery,” Kink continued, contrasting Bill Ackman who he said has made serial fortunes with Burger King, McDonald’s and Wendy’s while fast food workers and their families struggle to survive, often winding up in homeless shelters. 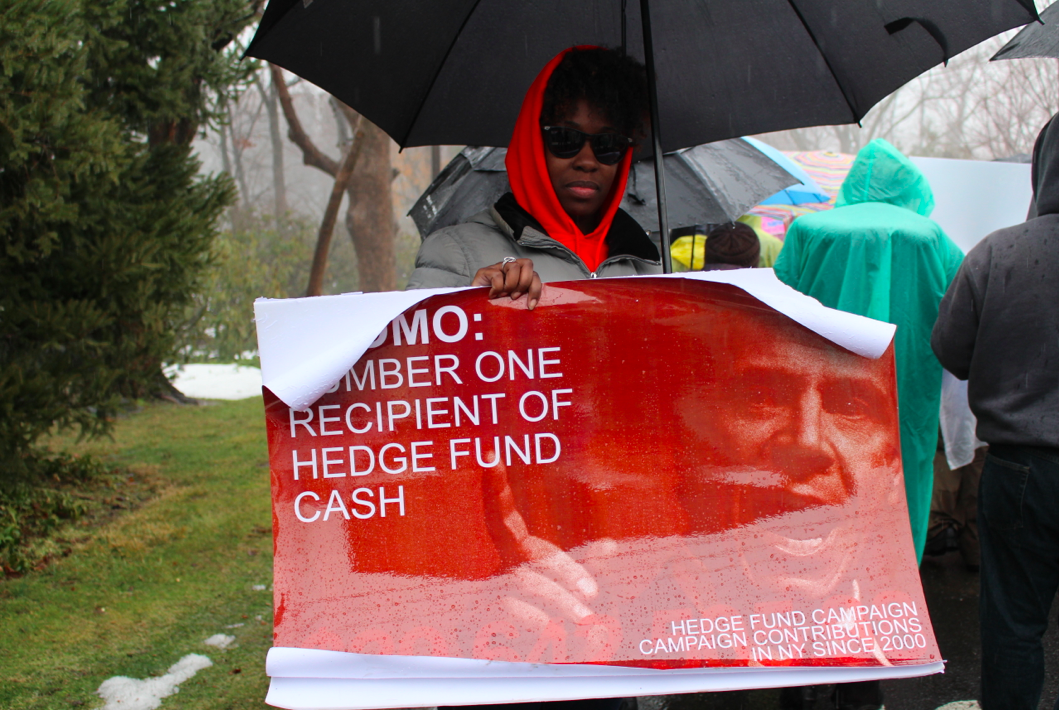 Kink said the  protesters were from several groups whose messages dovetail. “We’re advocating fair share taxes on those who can afford to pay, better wages for workers and funding for public schools,” he said.

Asked why the protesters were targeting Paul Tudor Jones on Saturday, Kink said, “Paul Tudor Jones specifically led the donors, the super PACs, the PACS that have piled $40 million in campaign cash into New York politics. Our governor, Gov. Andrew Cuomo, got $4.2 million himself and and another $2.6 to committees he controls.” 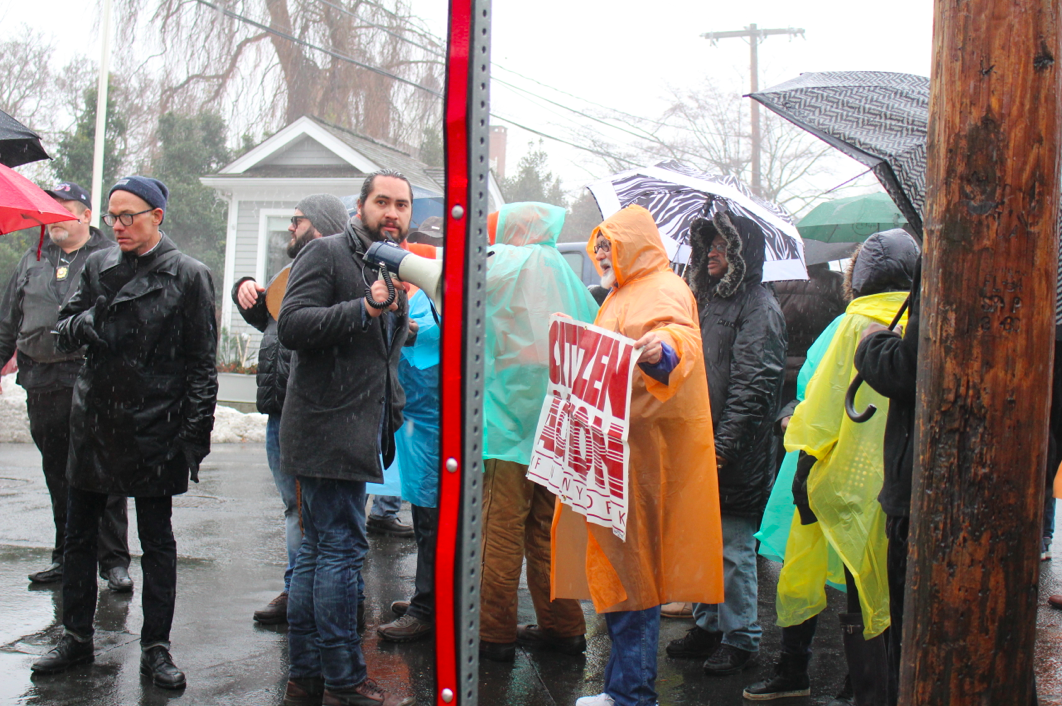 Kink said Tudor Jones was one of ten billionaires who created “New Yorkers for a Balanced Albany,” and along with Paul Singer, Dan Loeb and Louis Bacon raised $4.2 million in just 10 days.

“They swung control of the state Senate over to the Republicans, so they have low taxes, loopholes and no fair share taxes on the rich,” Kink said. “They are destroying the public school system with their latest policy preference for charter schools,” he said, adding that 97% of New York students do not go to charter schools. “They’ve hijacked the entire education agenda for their personal predilections.”

As protesters shouted, “Hey there billionaires, pay your fair share,” a woman said she’d gotten up 2:30am to make the trip from Canarsie to Greenwich. “Hey, hey, ho ho, these billionaires have got to go,” she chanted along with the group. 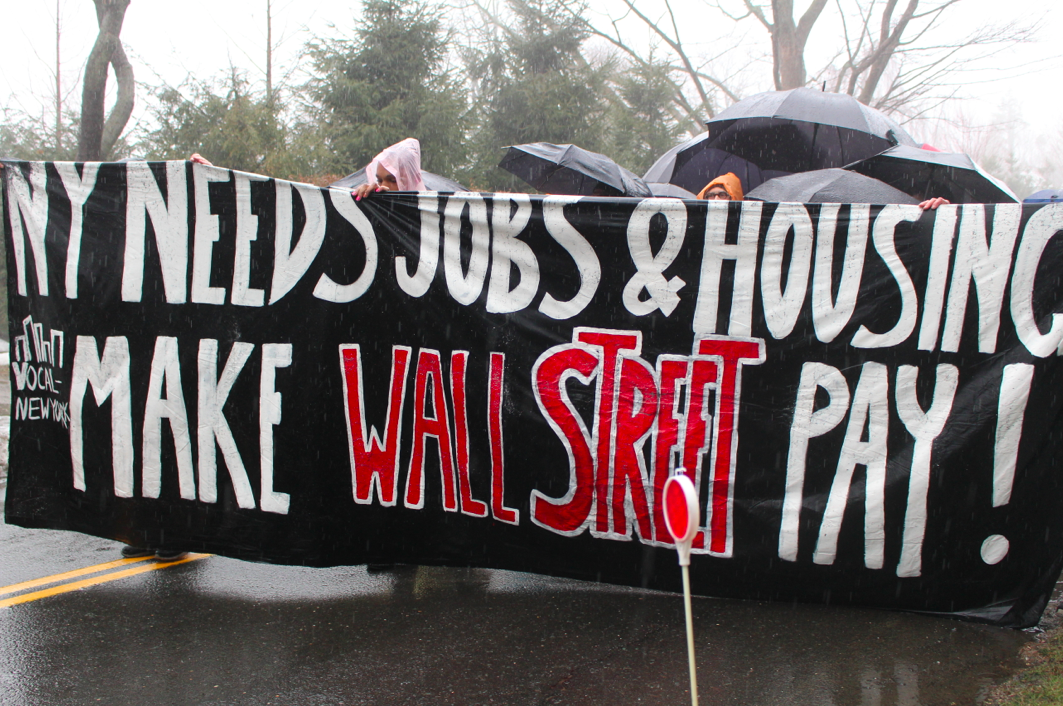 Zakiyah Ansari, of The Alliance for Quality Education blasted Tudor Jones. “He has a foundation called Robinhood Foundation. How ironic. How hypocritical that he fights for immigrants, and yet on the personal side, he uses his same dollars to fund a Senate majority that doesn’t care about the DREAM Act, doesn’t support a living wage or support public education.”

Ansari had to raise her voice over loud chants of the other protesters. “It’s ridiculous that we have to stand in the rain for a man who pushes policies that result in classes with 35 students, that don’t have art or music, that don’t encourage critical thinking. It’s disgusting,” she said, just as the crowd prepared to march south on Field Point Rd.

Kink, who took a break from leading the crowd in chants with the help of a megaphone, described the situation as a new Gilded Age. “We oppose the way our democracy has been taken over by these modern day robber barons,” he said.

“We think that democracy demands people pay attention to the way these people use their wealth  to get even wealthier and control politicians in New York and around the world,” Kink said. 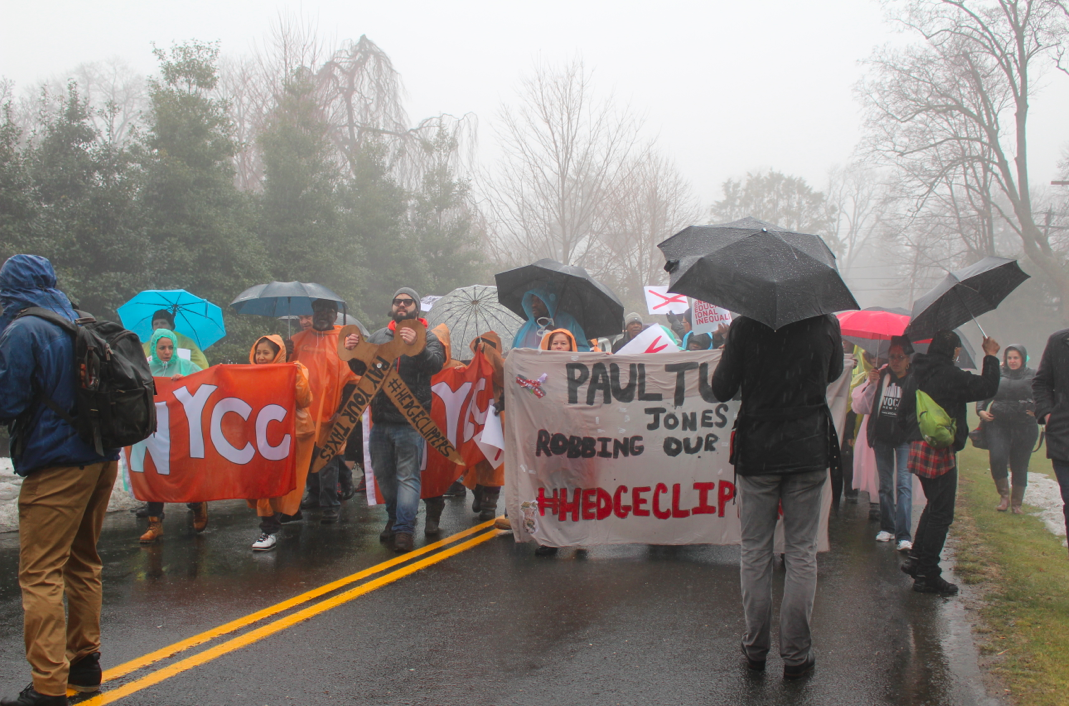 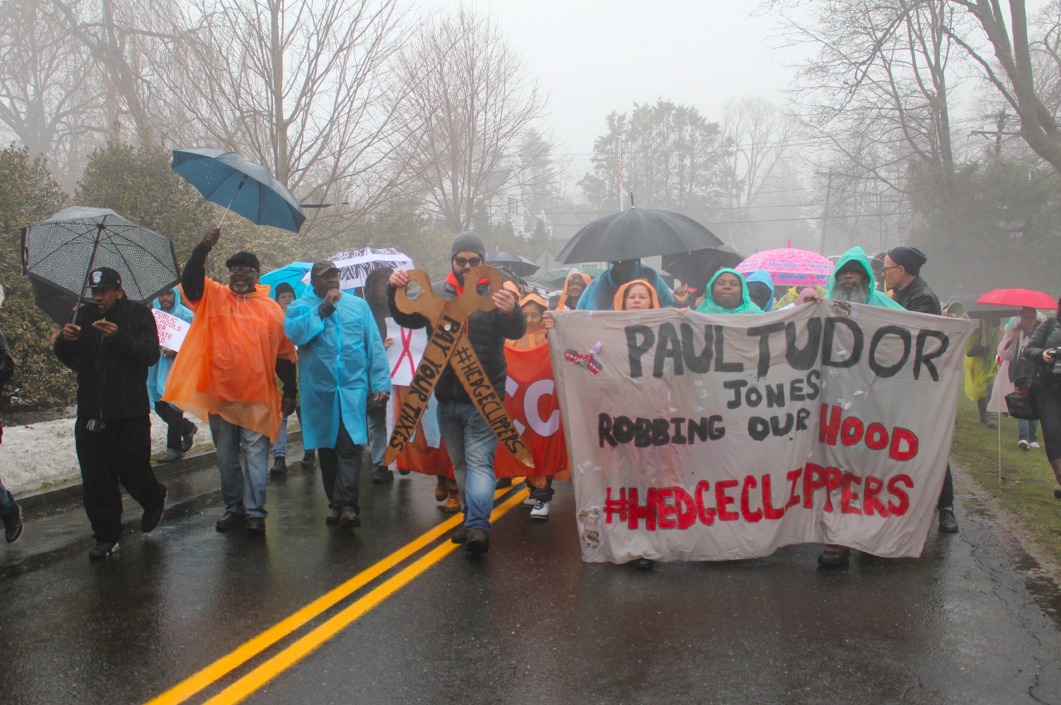