So… where’d you hide Nonna? That was our first question to Anthony Crudele, Bella Nonna owner and Chickahominy native, who always knew he wanted to be an entrepreneur. 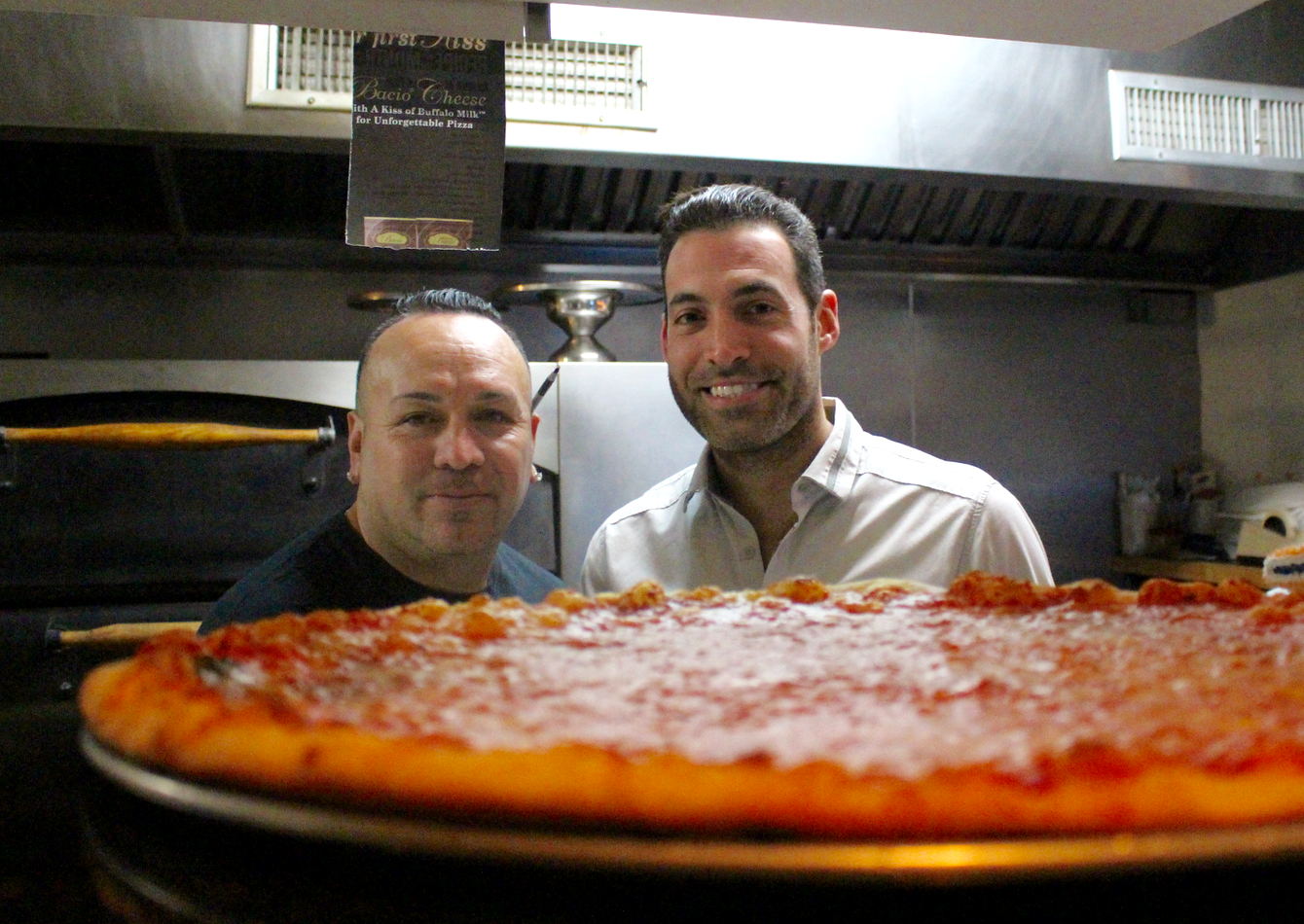 Nonna? No, not your “Nonna,” which is what Anthony calls his grandmother. The life size figure, who stood sentry outside the old Bella Nonna’s former location for years is in a safe place in the yard behind the restaurant, which is located at 280 Railroad Ave.

And while Nonna made the trip from Cos Cob to central Greenwich with Crudele, chef Lou Palma and his 30 years experience cooking Italian food, other aspects of the restaurants have changed indeed.

While the former Bella Nonna was a destination for big families, these days the restaurant’s typical party, according to Crudele, is a foursome – often a double-date, or adult children with their parents.

Also, the restaurant is a destination for an early crowd, which Crudele said mystifies him. He points out that while many people in Greenwich eat dinner closer to 8pm, Bella Nonna is busiest around 6 or 7pm. 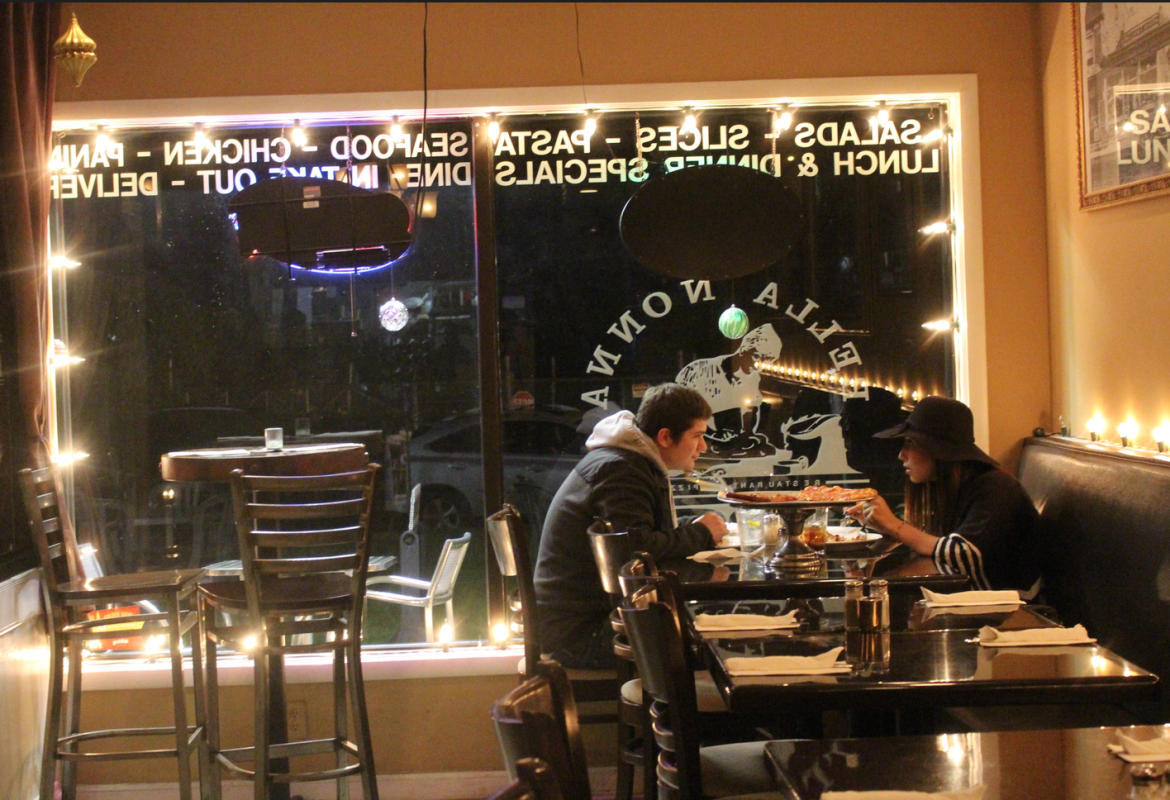 The Railroad Ave location was previously home to a string of ethic restaurants and a BBQ rib type restaurant. During the extensive renovation, Crudele removed expanses of black and white tile to create an exposed brick look, with generous moldings for a cozy, upscale atmosphere. Specials are posted on chalkboards and strands of small white lights add a warm glow.

And while many restaurants become associated with misbehaving children, Crudele said that is not the case at the new Bella Nonna. He said that children rise to the occasion and behave far better than maybe they did back at the Cos Cob location, which Crudele said was previously both a Pizza Hut and then DaVinci’s. Way back in 1964 the building originally featured a Dairy Queen.

“I’ve seen a nine-year-old tuck into a huge bowl of linguini an seafood and quietly just devour every bite,” Crudele said. 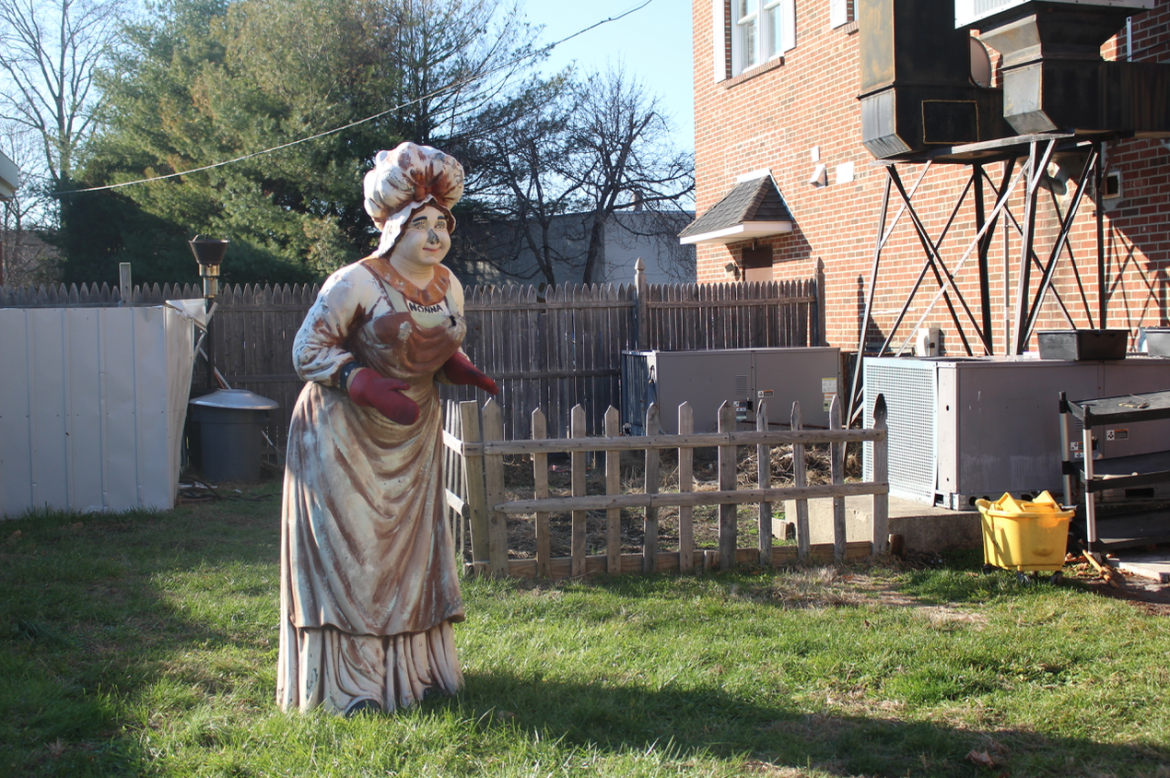 Growing up in Greenwich, Crudele, who attended Hamilton Avenue School, Western Middle School and Greenwich High School, said he was always the kid who organized the lunch order for his friends when they ventured off campus.

In his family, where he is forever considered the baby, as he is the youngest of three, Crudele said a traditional Italian lunch is mandatory on Sundays at 2:00pm.

And while the former Cos Cob location seated 100, and the Railroad Ave spot seats 40. But there is always parking. In fact the parking lot behind the building is huge, but many don’t know there is also an entire underground lot (the ramp is at the side of the building).

Crudele said that after he graduated from UConn, he went to work in finance, and then went to work for Joe Sandolo, who was the owner of Bella Nonna in Cos Cob. 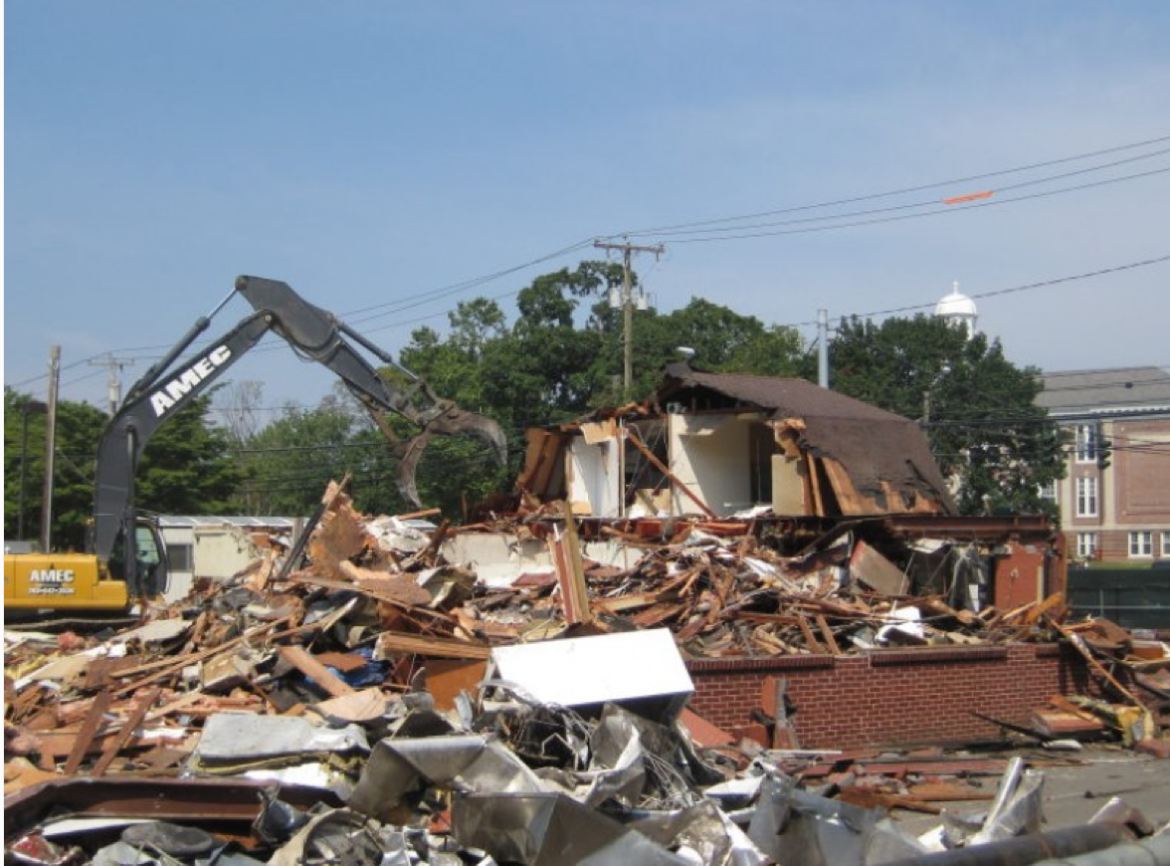 It was a sad day that the old Bella Nonna restaurant was demolished in 2009. Credit: Leslie Yager

“He knew I was a frustrated entrepreneur and was looking for something,” Crudele recalled. “Joe said, ‘Give it a try.'”

After Belle Nonna ended its run on East Putnam Ave in 2011, and the building was demolished and later resurrected as a bank branch, Crudele said there was a gap before the restaurant reopened in 2012 on Railroad Ave.

Crudele said that even they’ve been at the current location for three years, every week at least one former customer “discovers” the restaurant at its Railroad Ave location.

And though “Nonna” the apron clad, bonnet wearing statue is no longer an icon of East Putnam Ave, she is well taken care of, and is currently spending her days in the yard and garden behind the restaurant. 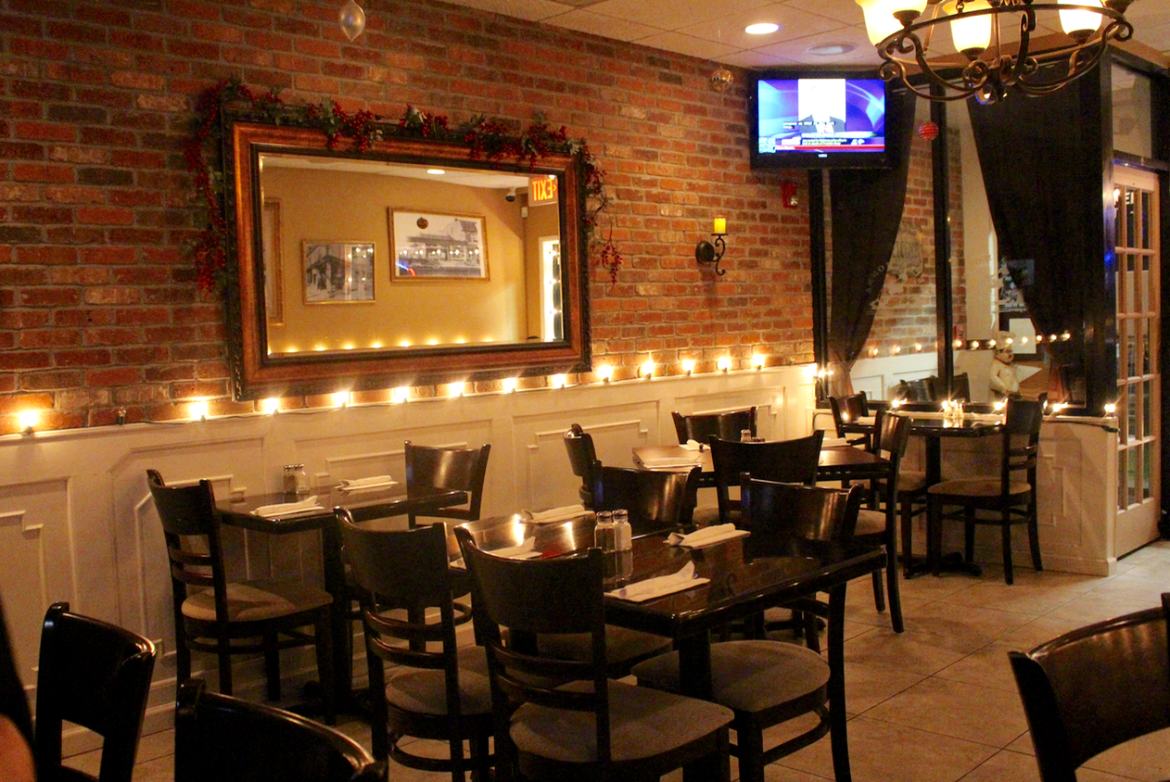 Eat in, Carry out, Delivery, Catering
Crudele said that while dining-in is popular, Bella Nonna does a brisk lunch business in both carry-out and delivery, with many local businesses including hedge funds and luxury car dealerships who set their speed dial to Bella Nonna.

They also offer catering. This Thanksgiving, Bella Nonna did all the cooking for several families in Greenwich. “We got  great feedback on that,” he said, adding that there’s not a catering menu per se. “A menu limits you. We can do anything. Just ask.”

What’s popular? the Arthur Ave Pizza with sausage, sautéed broccoli rabe, cherry tomatoes, olives and mozzarella. For those who like it hot, there is the “Pizza on Fire” with red hot peppers, hot sausage, pepperoni and strips of hot cherry peppers. 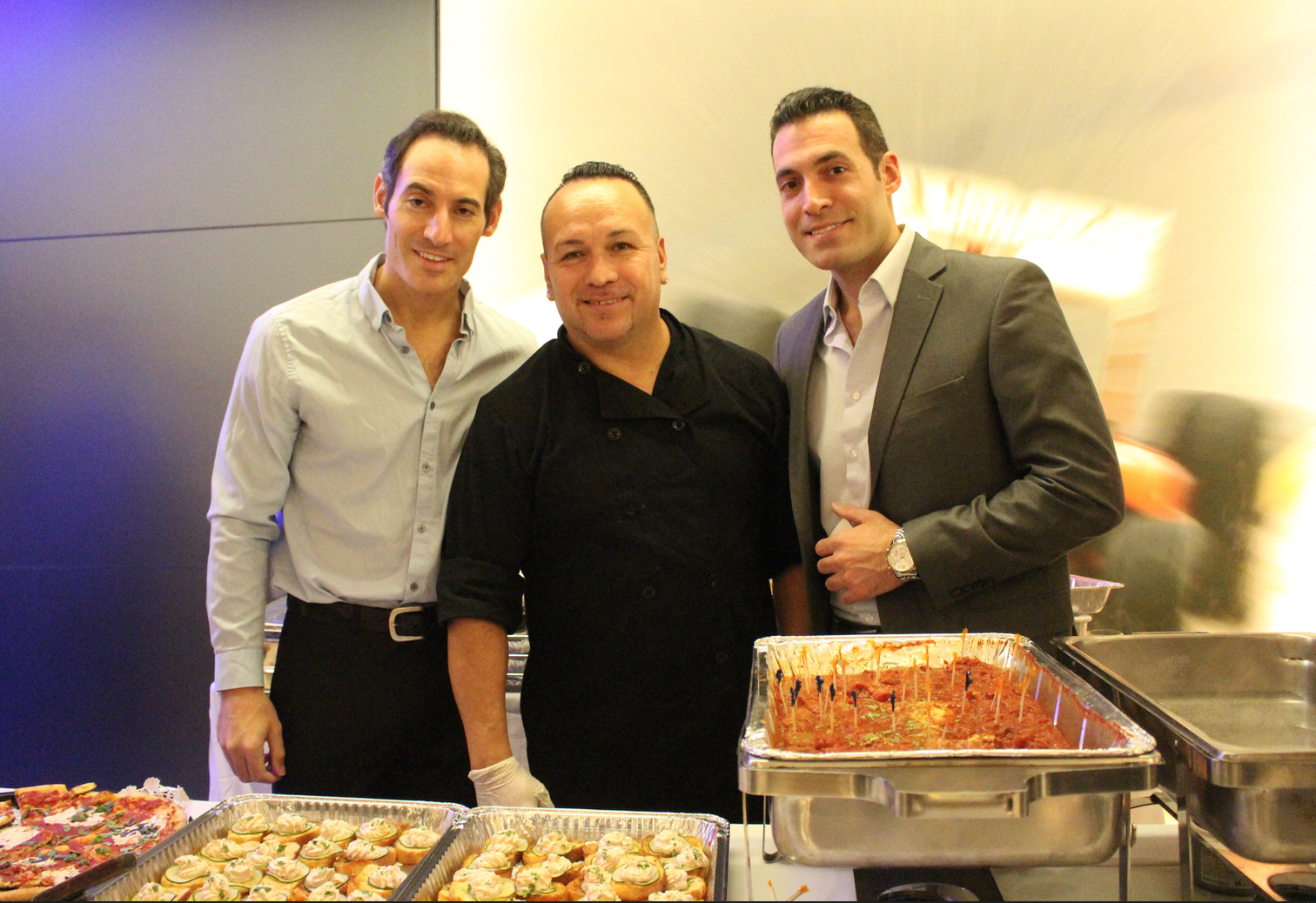 Popular entrees include Chicken Scarpariello, Pasta Bolognese and Chicken Paillard. Crudele said the Lamb Oso Buco, which is a dish served on the bone is also a popular menu special.  “I can sell a dozen on a Friday night,” Crudele said, adding that the dish, which takes six hours to cook, is the most expensive item on the menu, but it priced at just $24.

“No one has ever complained about our portions or our prices,” Crudele said.

If your dinner is not complete without dessert, Crudele said they serve a home made crème brûlée, tiramisu and cheese cake. “We always have cheese cake. Right now we have a special pumpkin cheese cake,” he said.