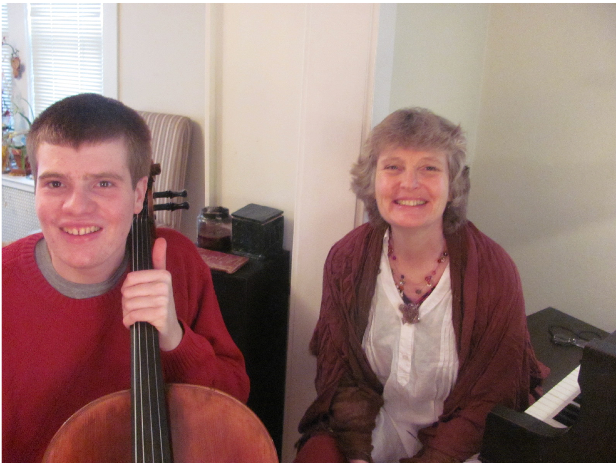 The following was submitted by Lynn and David Arezzini, Parents of Karl Arezzini

Our son Karl is a gifted 24-year-old cellist and singer who has autism. Some of Karl’s musical accomplishments include performing twice at Carnegie Hall, singing for CT state legislators, being featured in the Tribeca Film Festival’s award winning film, “Lost and Found Childhood” and being the subject of numerous articles in local and national publications.

The irony of Karl’s life is that he can play Bach suites on the cello but has had enormous difficulty brushing his teeth, dressing himself, crossing the street and living an independent life.   However, with the help of programs like Abilis and Chapel Haven in New Haven, Karl is closing the gap between his great music abilities and his daily living and independence skills. In spite of all Karl’s amazing progress, he may have to leave Chapel Haven in June 2015 and return home due to lack of state residential funding.

Bringing adults with disabilities home after they have been successfully living in the community is not only cruel, it is a huge waste of the investments that the public schools, DDS (Department of Developmental Disabilities) and families have made in these individuals over the years.

Why have 15 years of public special education, and transition training if an adult with disabilities’ future is to live home with elderly parents? This is morally wrong and a huge waste of taxpayer dollars!

This is a fight for disabled adults’ civil rights.  No other group has ever been told that they must live with their parents until their parents die.  Our adult children need laws to protect their rights to live in the community with the supports they need to be as independent and productive as possible.

I have to ask why DDS is spending much time and effort inventing new programs when there are many existing programs that are serving disabled adults very well right now?  Why are expensive regional centers and Southbury Training School not being closed so adults with disabilities can live integrated in the community with the savings from closing Connecticut state institutions?  This summer when I spoke to DDS Commissioner Macy, he agreed with me that Chapel Haven, where Karl attends is one such excellent program.

Chapel Haven has been teaching adults with disabilities to live independent lives for over 40 years and is also a fraction of the cost of group homes and regional settings.

We are also confused about why the new CMS (Centers for Medicare and Medicaid Services) settings rule is being interpreted to mean that peers with disabilities living in Chapel Haven’s SAIL program is restrictive and is no longer being funded by DDS.

The elephant in the room is the question “What happens after we die?”

Wouldn’t it be better for our 24-year-old son to be living independently now so that he doesn’t become an expensive burden to society as an emergency placement?  Wouldn’t it be a better use of funding to allow Karl to become more independent and productive, rather that let his independent skills regress until the traumatic day when he becomes an emergency placement following our deaths? Karl’s needs are immediate and can not wait until we die.  He needs residential supports now!

Related: Families Share Stories in Greenwich with Legislators: Life after Cuts to Dept. of Developmental Services