As a leader in Long Island Sound and ocean conservation, The Maritime Aquarium at Norwalk is doing its part for the environment by significantly reducing its employ of single-use plastics.

Gone from the Aquarium’s cafeteria and theater concessions stand are all drinking straws. Guests now have the option of boxed water or beverages in glass and aluminum containers, instead of in plastic bottles.

— an announcement from the Maritime Aquarium

In the Aquarium’s gift shop, plush animals no longer are stuffed with plastic beads, toys no longer have cellophane wrapping, and purchases no longer go into plastic bags. 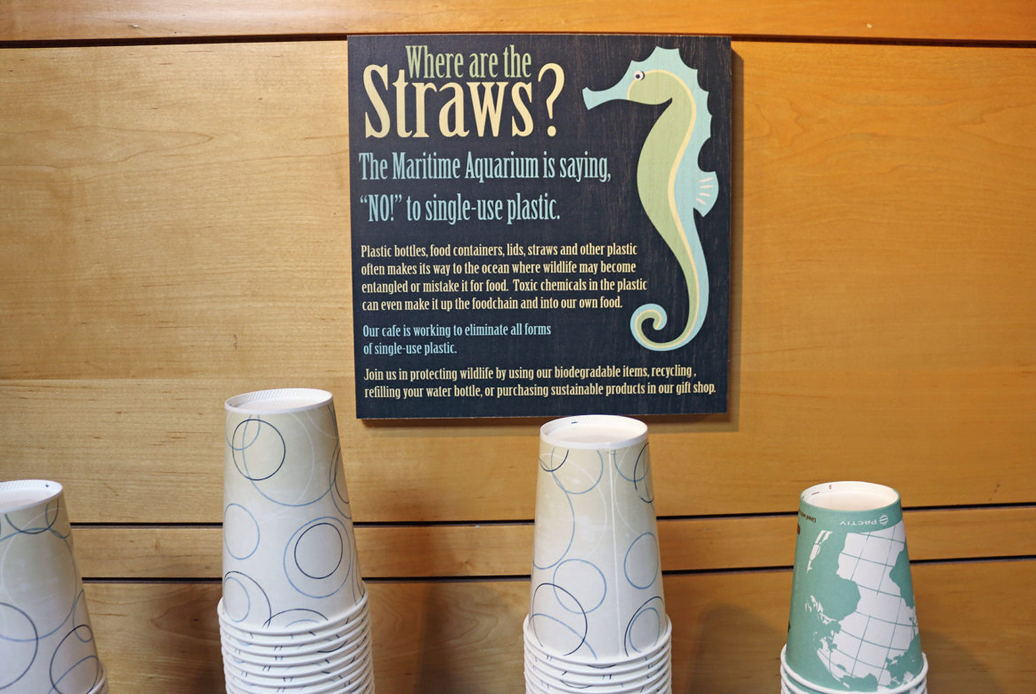 “Plastics are pervasive in the consumer world, and — by going through this process —we understand first-hand how hard it is to divest of its use,” said Dr. Brian Davis, president of The Maritime Aquarium.

“However, the issue of plastics in the environment is a serious concern. Recycling is not enough. I am proud of the lengths that our staff — and the staffs of CulinArt, our on-site catering company, and Event Network, our gift-shop operator — have gone through to help in our elimination of single-use plastics from The Maritime Aquarium.”

Certainly, statistics about plastics are frightening and motivating. They include:

• Americans used about 50 billion plastic bottles of water last year. Less than one-third to one-fourth of those bottles were recycled. The rest ended up in landfills or as litter in the environment.1, 2

• Because of their small sizes, toxic microplastics in aquatic environments blend with plankton at the base of the food web. These microplastics are consumed and work their way up into larger and larger consumers, including humans.3

• An estimated 9 million tons of plastic enter the oceans every year.4

• Plastics in the oceans are so pervasive that a plastic bag, like those offered at grocery stores, has even been found even at the deepest point in any ocean: the Mariana Trench, 36,000 feet below the surface of the Pacific.5

• A recent study in Ireland reportedly found microplastics in 3 of every 4 deep-water fish sampled in the northwestern Atlantic. Those fish are eaten by tuna, dolphin, swordfish and seals, as the contamination moves up the food chain.7

• Another study found that 267 species worldwide – including 44 percent of sea birds and 43 percent of marine mammal species – are impacted by marine debris. Sea turtles are known to swallow plastic bags, mistaking them for jellyfish.8

• The U.S. National Oceanic and Atmospheric Association (NOAA) estimates that plastic in our oceans kills at least 1 million sea birds and 100,000 mammals each year.9

“Plastics will be difficult to remove from their use in durable goods, like auto parts, plumbing pipes and electronics,” said Dr. David Hudson, research scientist for The Maritime Aquarium. “But what we can easily fix now is our reliance on single-use plastics, which allow for quick consumer conveniences but with long-term environmental consequences.”

In the Cascade Café, the Aquarium’s onsite catering company, CulinArt, has removed nearly all of its single-use plastic. Changes include:

• All straws and plastic soda-cup lids are eliminated. Even paper straws are not offered.

• Water is now sold in paper boxes, instead of in plastic bottles.

• Sodas in the Café, and also in the IMAX Theater concessions stand, are sold in aluminum cans. Juices and teas now are sold as boxed drinks and in glass bottles.

• Coffee cups and soup cups are now made out of a paper coated with polylactic acid (PLA), which is produced from renewable resources such as corn and sugarcane, instead of petroleum.

• Plates and the containers for hamburgers all made of a sugar-based paper.

• Ketchup, mustard and other condiments are available only in large pump containers, for adding into small biodegradable paper cups. Gone are little plastic squeeze packets.

About the only things still sold in plastic are yogurts, juice boxes and Uncrustables sandwiches. But the Aquarium is actively seeking alternatives for those items as well. 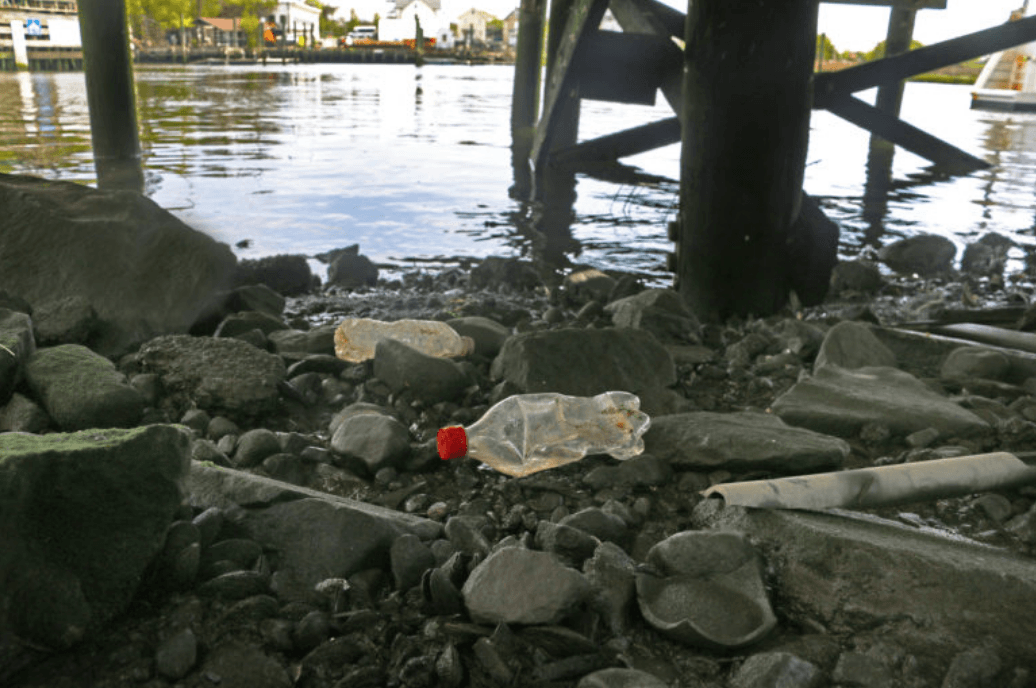 “We are happy to support The Maritime Aquarium’s efforts to shape public behavior around conservation and the harmful use of plastics,” said Darren Zaldo, director of dining services for CulinArt. “We have heard nothing but positive responses from guests when we explain, for example, why they can’t have a straw or a lid for their soda.”

In the Aquarium gift shop, changes include:

• Guests’ purchases no longer are placed in a plastic bag. Instead, guests are invited to purchase a reusable tote made from recycled plastic.

• Plush animals no longer are stuffed with plastic beads. Some plush creatures are made entirely from post-consumer plastic bottles.

• Toys, such as dolls and animal figures, no longer come in boxes covered in cellophane.

• Acrylic (plastic) sign holders are being replaced with recycled or reusable materials.

• “Green” products are now emphasized, such as reusable water bottles, eco-jewelry and toys made from materials like post-consumer recycled plastic, metal and sustainably harvested wood.

“We are holding ourselves accountable to making significant progress in our merchandising and operations when it comes to sustainability. The goal is to intelligently and efficiently help educate and inspire guests to make a difference through the choices they make in everyday life, while continuing to present the most appealing retail offering possible.”

In addition to the changes in the Café and gift shop, The Maritime Aquarium has created displays about Americans’ excessive use of plastic water bottles and the larger problems of plastic pollution in the ocean. Also, a water fountain was repurposed to become a bottle-filling station, so that guests can easily refill reusable water bottles they bring during their visit.