The YWCA’s signature event, the Stand Against Racism, drew a record crowd on Friday at Greenwich Town Hall.

The YWCA’s mission is to empower women and eliminate racism, and the Stand Against Racism raises awareness about the negative impact of institutional and structural racism. 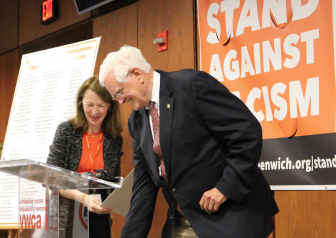 The guest speaker, Claudia Connor, President and CEO of Connecticut Institute for Refugees and Immigrants, “CIRI,” delivered a powerful speech for which she received a standing ovation.

The goal is for them to become self-sufficient, integrated and contributing members of the community. 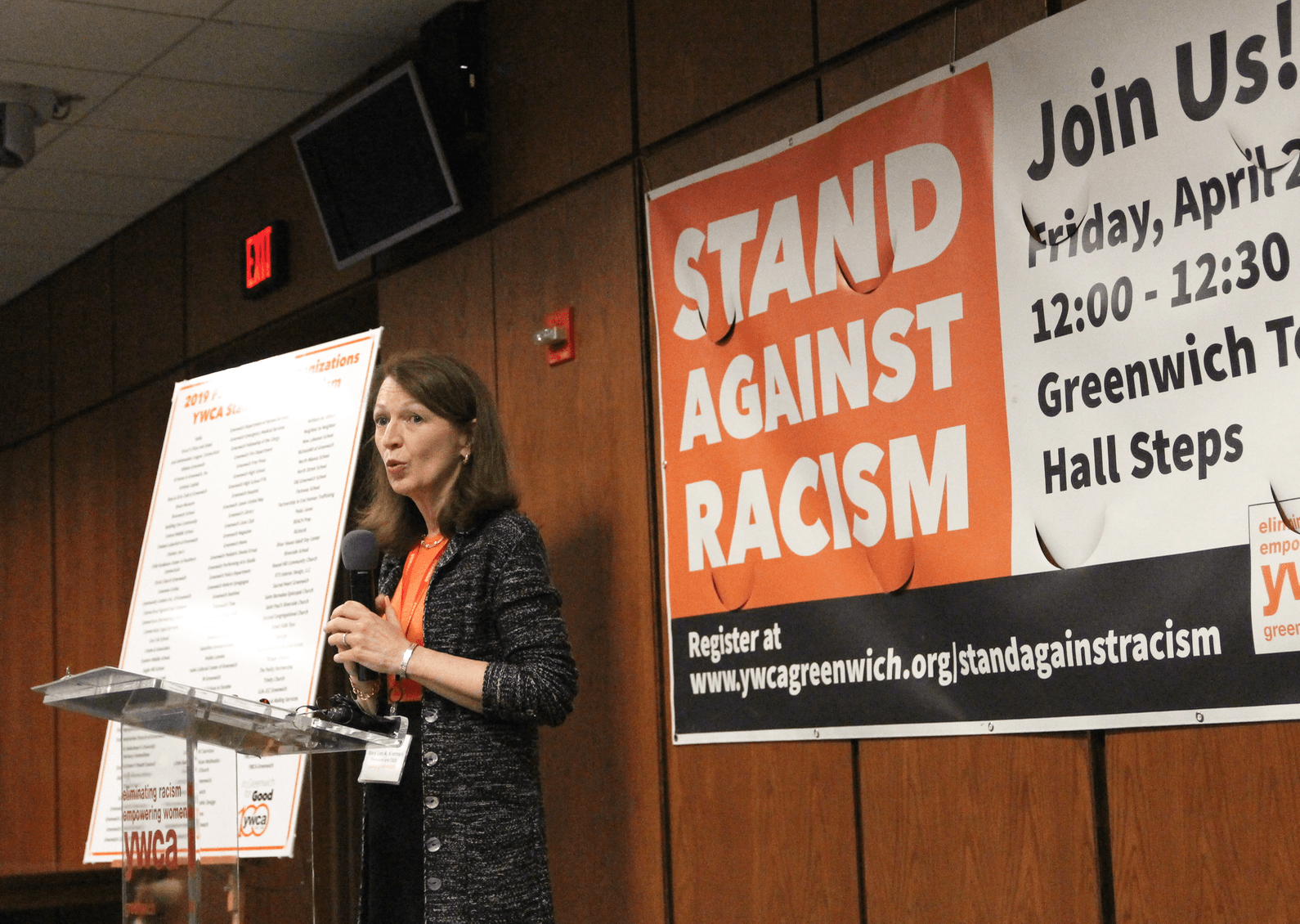 “In our work, every day we see how racism, ethnic discrimination, fear and hatred impact the people we serve,” Connor said, adding that the history of immigration legislation is revealing.

“It is immediately obvious that racism is not new to immigration law and policy. From the earliest articulation of immigration policy, deeply-held racist views were incorporated into legal structures – trying to ensuring that not all people are created equal – only some people are created equal, and that they have the power to determine who else is allowed into our country,” she said.

In 1790, the first Congress enacted the first naturalization law in the US, providing citizenship to any “free white person . . . of good moral character.”

“Ever since, our immigration laws attempted to exclude the disfavored groups of the time, often defining those groups in racial terms,” she said. 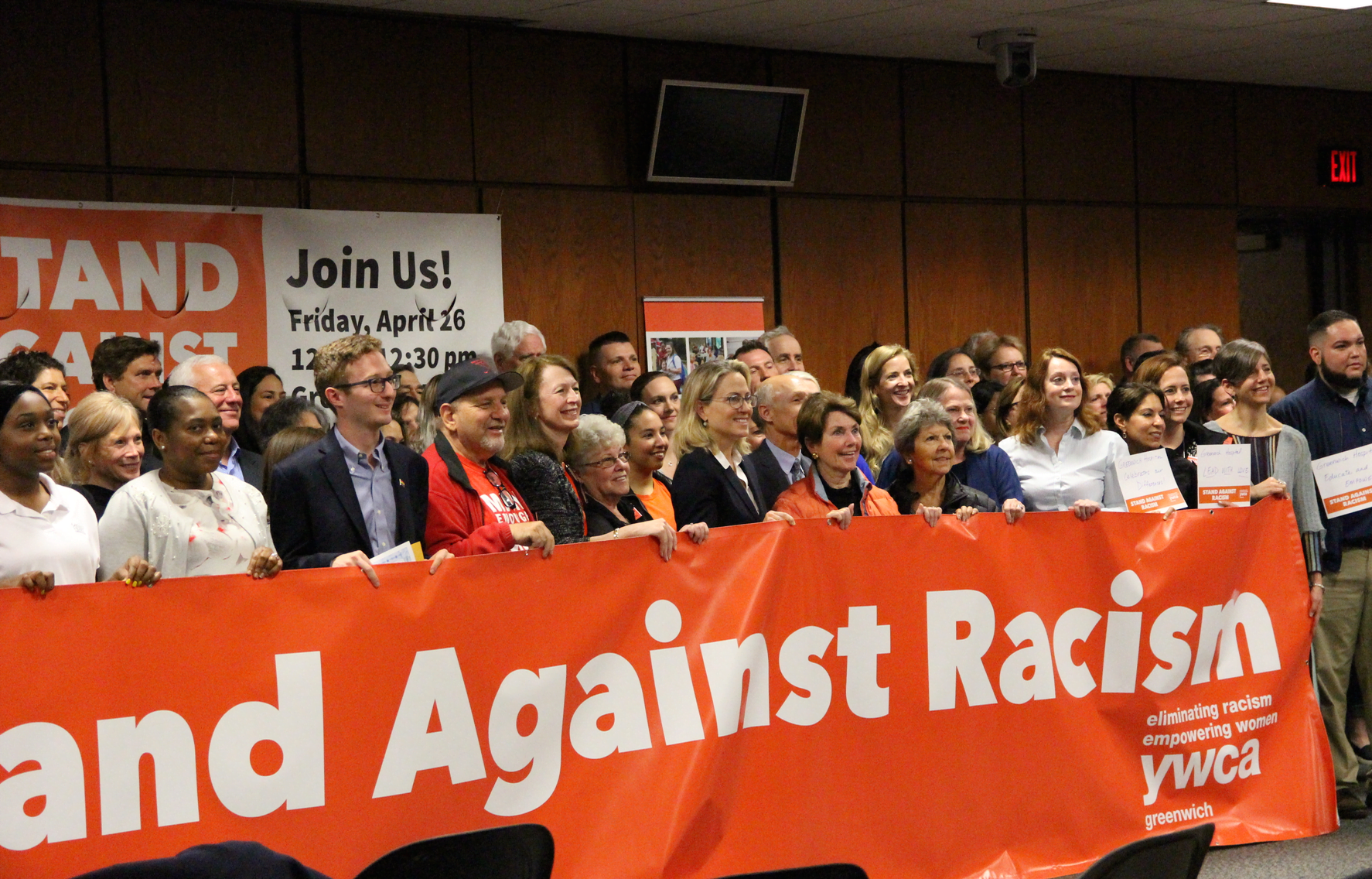 All attendees took part in a group photo at Greenwich Town Hall on Friday to demonstrate their Stand Against Racism. April 26, 2019 Photo: Leslie Yager

A few other examples:

• In 1870, The Naturalization Act was revised, so that naturalization was limited to white persons and persons of African descent, effectively excluding Chinese and other Asian immigrants from becoming citizens.

• The Chinese Exclusion Act of 1882 specifically and explicitly excluded a single group – Chinese laborers – because of race and class – setting the stage for explicit and implicit racial and class bias in our immigration laws and policies.

• In 1942, President Roosevelt signed an Executive Order that ordered the mass incarceration of 120,000 persons of Japanese ancestry living on the West Coast, most of whom were U.S. citizens or documented immigrants. The Supreme Court later held that the exclusion order leading to Japanese American internment was not unconstitutional.

• In 1965, the Immigration and Naturalization Act brought some reform, repealing quotas that had impacted negatively peoples of Asian, Latin American, and African descent. This immigration act started to recognize the positive impact of changing demographics and, the increasing racial, ethnic, and religious diversity of the US.

Connor said that today anti-immigrant and anti-refugee sentiment are at an unparalleled high and policies reflect that.

“One of the many Executive Orders of 2017 banned nationals from eight mostly majority Muslim countries – this travel ban remains in place over two years later,” she said, adding that reduced refugee admissions are the lowest they have been in decades – and that is with an unprecedented 25.5 million refugees in the world.”

“And we have weakened asylum protections, particularly for women and children fleeing domestic violence and gangs,” she said. “The crisis is not the people seeking safety and protection, it is the human rights catastrophe unfolding on the border and in detention centers across the country.”

Immigration enforcement is not about keeping us safe, or upholding the rule of law, or protecting children.

Put simply, the immigration policies implemented today are designed to be exclusionary and have an undeniable disproportionate impact on immigrants of color.

We are witnessing racism revealed – within an environment that seemingly gives license to people to act hatefully with impunity. – Claudia Connor, President and CEO, Connecticut Institute for Refugees and Immigrants

Connor said that in order to effectively address immigration rights, it must be seen as a civil rights issue and a racial justice issue.

“No successful civil rights or social justice movement has succeeded in isolation,” she said. “This intersectionality is vital.”

“We must counter the belief of ‘supremacy’ – that my nationality or my skin color or my faith is better than yours,” she said. “All people are created equal. We must be vigilant in fighting against the normalizing of racism.”

Connor said that a week earlier,  at a CIRI event in Hartford, Attorney General William Tong reminded the audience of a moment in the presidential campaign when Jeb Bush used the term “anchor babies” in an interview.

“He was widely criticized for doing so. As a defense, he first said, ‘Nothing about what I’ve said should be viewed as derogatory towards immigrants at all … this is how politics plays,’ and then went on to say, ‘Frankly, it is more related to Asian people.'”

Connor decried the myths and false narratives about immigrants.

She said it is a fact that refugees undergo extensive and extreme vetting processes, and that coming to the US as a refugee is by far the hardest way to enter this country.

Also she said, it is a fact that all refugees are fully documented. They receive social security cards and work authorizations.

“The pain and fear that the federal government’s deportation agenda is wreaking on immigrant communities is undeniable and indefensible,” she said. “At CIRI, we feel a sense of responsibility to be the keeper of the facts and to set the record straight – over and over and over.” 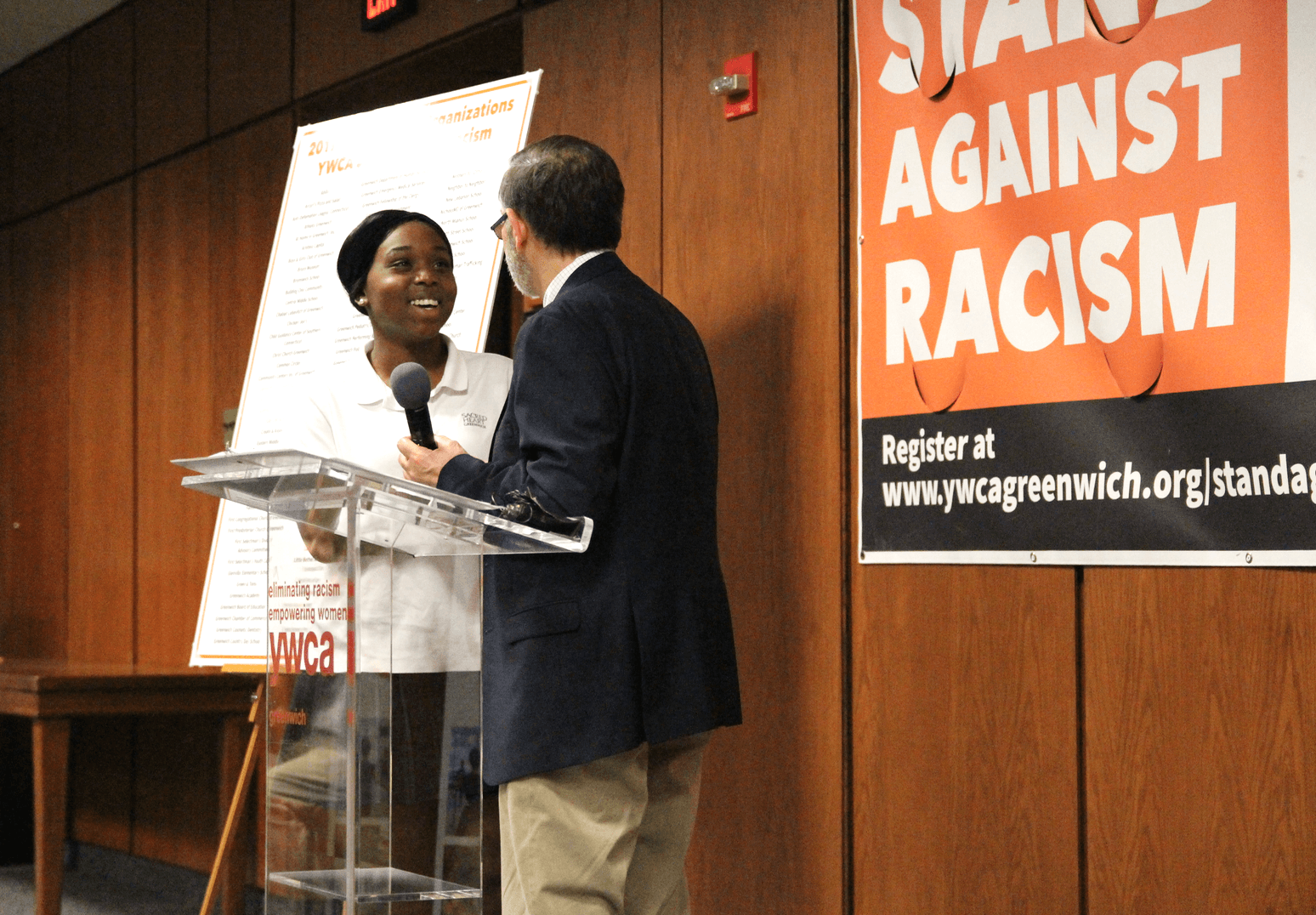 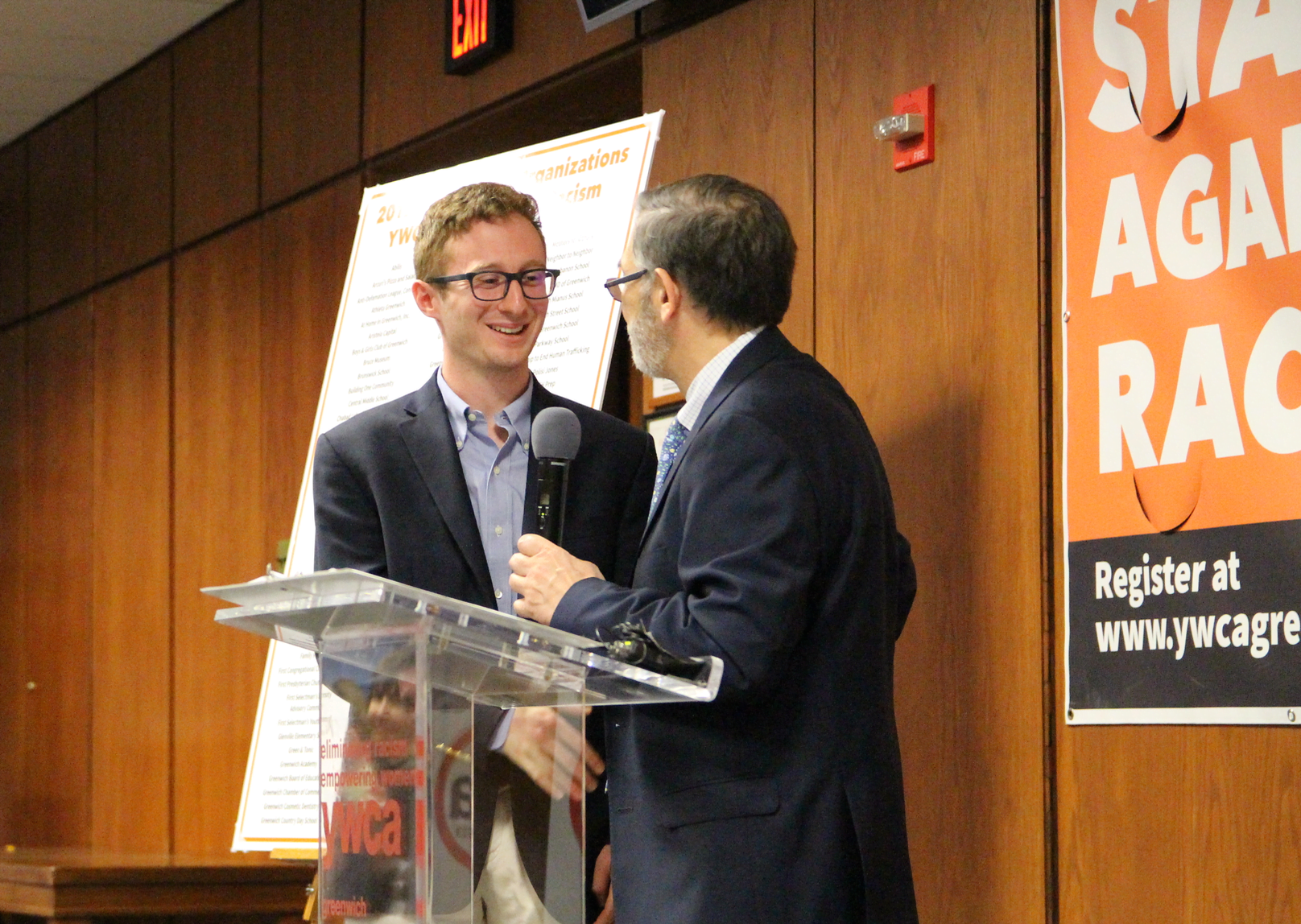