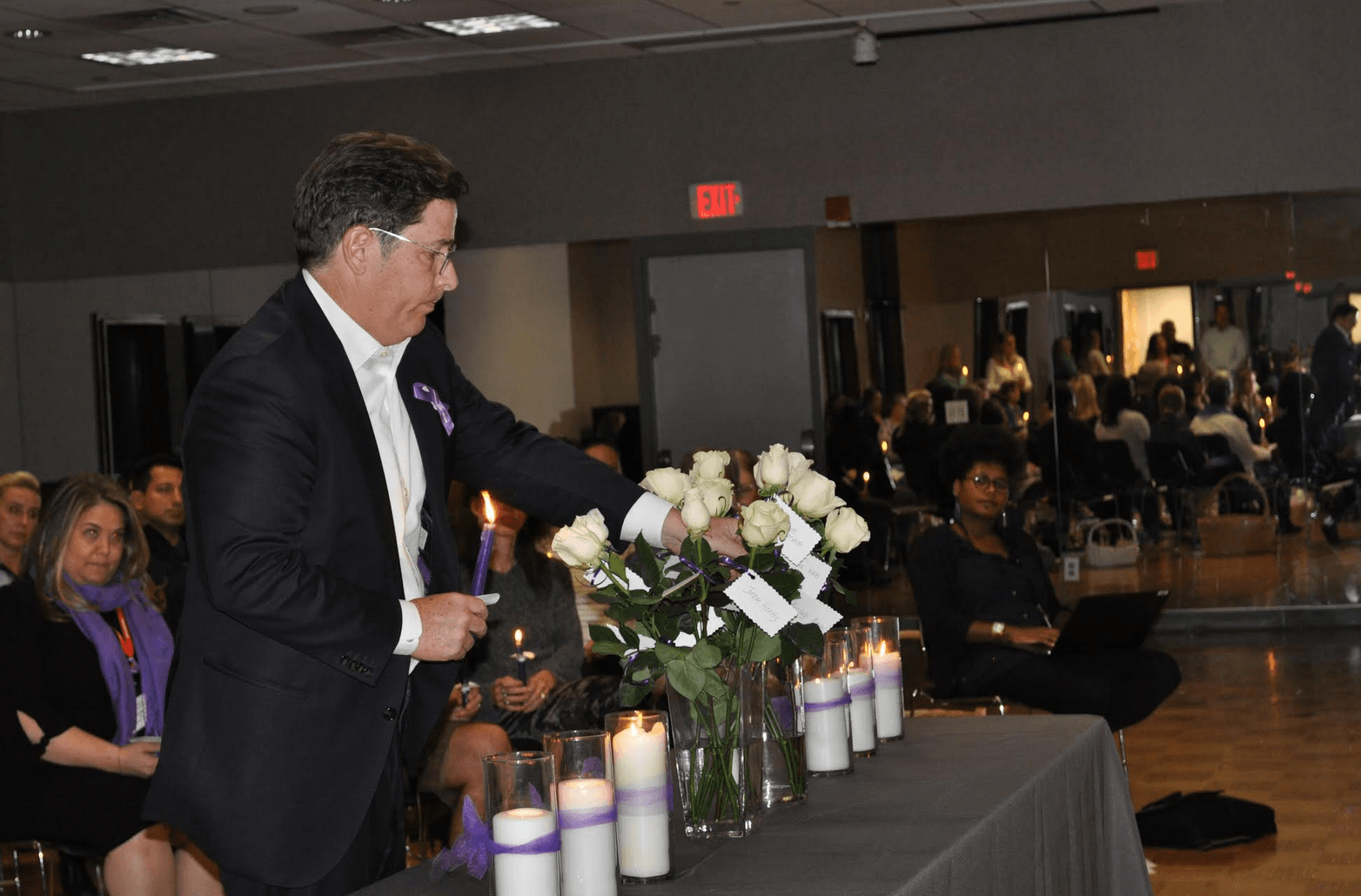 October is National Domestic Violence Awareness and Prevention Month. Since 2004, YWCA Greenwich has held a candlelight vigil to pay tribute to survivors of domestic abuse, remember those who have lost their lives, honor the volunteers who give their time and talent to help survivors, and bring people together for a “call to action” to join the fight to end domestic violence in our community.

“Since 1981, YWCA Greenwich has helped thousands of women, children, and men who are victims of domestic violence,” said Mary Lee Kiernan, President and CEO, YWCA Greenwich. “Last year alone our staff responded to more than 3,700 calls to our hotline, and nearly every day, someone came through our doors seeking help.”

Today, YWCA Greenwich is the only state designated provider of domestic abuse services in Greenwich. No one is ever turned away and all services are provided free of charge.

At the emotional event, a victim of domestic violence bravely told her story of endless court hearings with her abuser who used the family court system to continue the abuse long after their divorce was final. She was also a client of YWCA Domestic Abuse Services and thanked the YWCA for helping her to see that there is a path forward and for “giving her the tools to pave it.”

These services, provided to clients of YWCA Domestic Abuse Services, are giving victims of abuse the knowledge and guidance that will help them lead productive lives free of their abusers.

To honor the 23 victims who lost their lives last year at the hands of their abusers, candles were lit, names were read and a rose for each victim was placed in vases by members of the audience, some of whom were survivors themselves.

“It is the most courageous thing in the world to feel fear and keep going anyway,” said Meredith Gold, Director of Domestic Abuse Services. “Tonight, we remember those we’ve lost to domestic violence, and we also honor all the survivors and their astonishing courage.”

Guests were also invited to the YWCA Greenwich Gertrude White Gallery to view this year’s art show. Sorry / Not Sorry is a powerful series of writings produced by clients of YWCA Greenwich Domestic Abuse Services. The art show will be open to the public throughout the month of October.

During this month, YWCA Greenwich sponsors activities to raise awareness about this public health and criminal problem in our community. On Sunday, October 6, more than 250 members of the Greenwich community joined YWCA Greenwich for its inaugural Walk the Walk Against Domestic Violence. The family-friendly event included dogs and brought the community together in a unique way to show victims of domestic violence that they are not alone. The funds raised directly support YWCA Greenwich Domestic Abuse Services.

Members of the community can still donate by going to www.ywcagrn.org/walkthewalk.
October 14-18 is designated by YWCA USA, as the national Week Without Violence. Week Without Violence is part of a global YWCA movement to end violence against women and girls across our country and around the world.

On Tuesday, October 15, YWCA Greenwich will host: DV Today: A Conversation with Professor
Susan Sorenson, Executive Director of the Ortner Center on Violence and Abuse at the University of Pennsylvania. She will join Meredith Gold, Director of Domestic Abuse Services for a conversation and Q&A.

Professor Sorenson has done extensive research on the issue of domestic violence and the societal changes that affect violence against women and girls. She helped establish violence against women as a public health issue and furthered the study of firearms as a consumer product. A primary focus of her work is the social context in which violence occurs, specifically, the norms that shape whether and how violence is tolerated.

The event is free and open to the public. Registration is recommended at
www.ywcagrn.org/dvtoday.