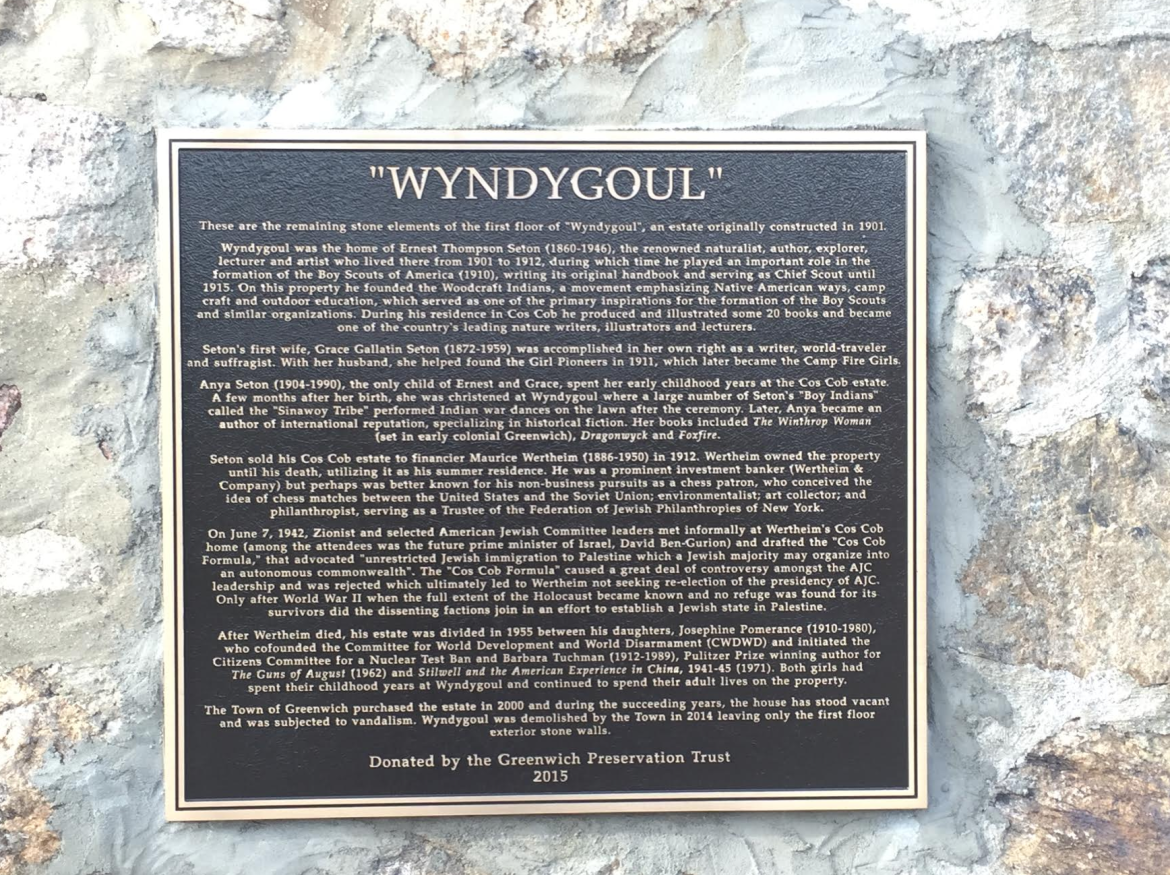 Last December, the Greenwich Preservation Trust celebrated that Wyndygoul was placed on the Register of Historic Places. They commemorated the event and the preservation of some of the mansion’s foundation by underwriting  a large plaque, which was placed on the remains of Ernest Seton’s mansion.

This week, readers alerted GFP that the commemorative plaque is gone.

A call to Jo Conboy, Chairman of the Greenwich Preservation Trust cleared up a blossoming rumor that the plaque was stolen. Rather, she said, her group took it down after disagreements among the family over what the plaque should say. 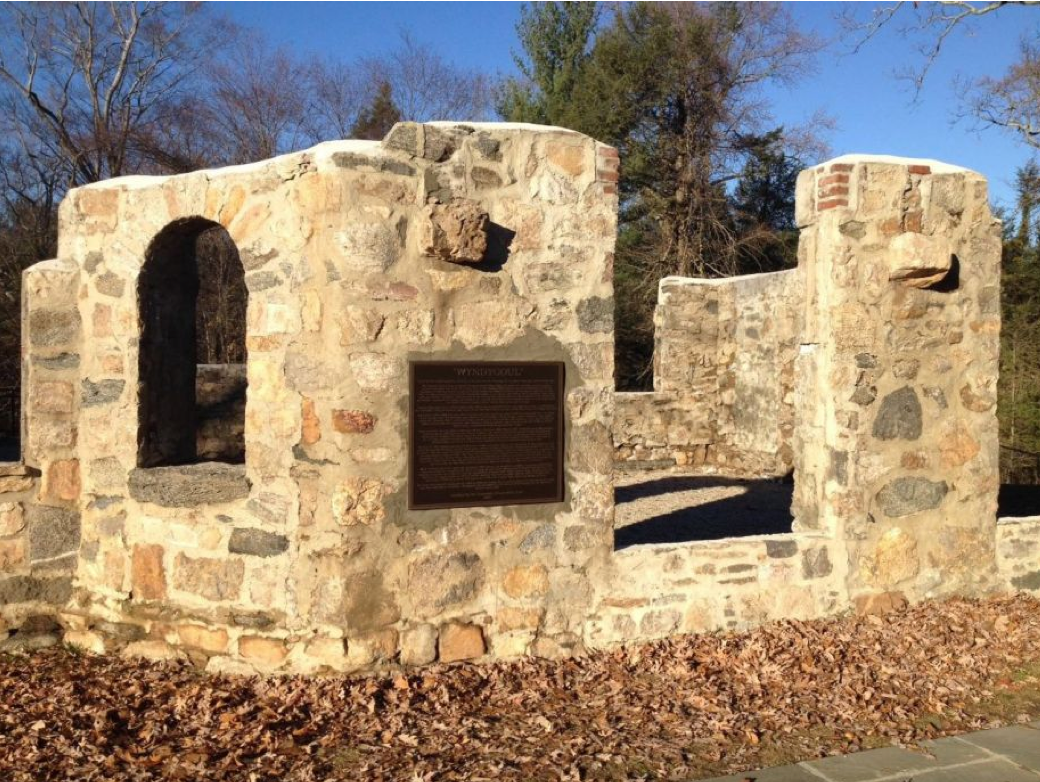 The plaque detailed Seton’s connection to the Boy Scouts. It also listed achievements of the Wertheim family, including Josephine Pomerance and Barbara Tuchman. It read:

These are the remaining stone elements of the first floor of “Wyndygoul,” an estate originally constructed in 1901.

Wyndygoul was the home of Ernest Thompson Seton (1860-1946), the renowned naturalist, author, explorer, lecturer and artist who lived there from 1901 to 1912, during which time he played an important role in the formation of the Boy Scouts of America (1910), writing its original handbook and serving as Chief Scout until 1915. On this property he founded the Woodcraft Indians, a movement emphasizing Native American ways, camp craft and outdoor education, which served as one of the primary inspirations for the formation of the Boy Scouts and similar organizations. During his residence in Cos Cob he produced and illustrated some 20 books and became one of the country’s leading nature writers, illustrators and lecturers.

Seton’s first wife, Grace Gallatin Seton (1872-1959) was accomplished in her own right as a writer, world-traveler and suffragist. With her husband, she helped found the Girl Pioneers in 1911, which later became the Camp Fire Girls.

Anya Seton (1904-1990), the only child of Ernest and Grace, spent her early childhood years at the Cos Cob estate. A few months after her birth, she was christened at Wyndygoul where a large number of Seton’s “Boy Indians” called the “Sinawoy Tribe” performed Indian war dances on the lawn after the ceremony. Later, Anya became an author of international reputation, specializing in historical fiction. Her books included The Winthrop Woman (set in early colonial Greenwich), Dragonwyck and Foxfire.

Seton sold his Cos Cob estate to financier Maurice Wertheim (1886-1950) in 1912. Wertheim owned the property until his death, utilizing it as his summer residence. He was a prominent investment banker (Wertheim & Company) but perhaps was better known for his non-business pursuits as a chess patron, who conceived the idea of chess matches between the United States and the Soviet Union; environmentalist; art collector; and philanthropist, serving as a Trustee of the Federation of Jewish Philanthropies of New York.

On June 7, 1942, Zionist and selected American Jewish Committee leaders met informally at Wertheim’s Cos Cob home (among the attendees was the future prime minister of Israel, David Ben-Gurion) and drafted the “Cos Cob Formula,” that advocated “unrestricted Jewish immigration to Palestine which a Jewish majority may organize into an autonomous commonwealth.” The “Cos Cob Formula” caused a great deal of controversy amongst the AJC leadership and was rejected, which ultimately led to Wertheim not seeking re-election of the presidency of AJC. Only after World War II when the full extent of the Holocaust became known and no refuge was found for its survivors did the dissenting factions join in an effort to establish a Jewish state in Palestine.

After Wertheim died, his estate was divided in 1955 between his daughters, Josephine Pomerance (1910-1980), who cofounded the Committee for World Development and World Disarmament (CWDWD) and initiated the Citizens Committee for a Nuclear Test Ban and Barbara Tuchman (1912-1989), Pulitzer Prize winning author of The Guns of August (1962) and Stilwell and the American Experience in China, 1941-45 (1971). Both girls had spent their childhood years at Wyndygoul and continued to spend their adult lives on the property.

The Town of Greenwich purchased the estate in 2000 and during the succeeding years, the house has stood vacant and was subjected to vandalism. Wyndygoul was demolished by the Town in 2014, leaving only the first floor exterior stone walls.

Donated by the Greenwich Preservation Trust 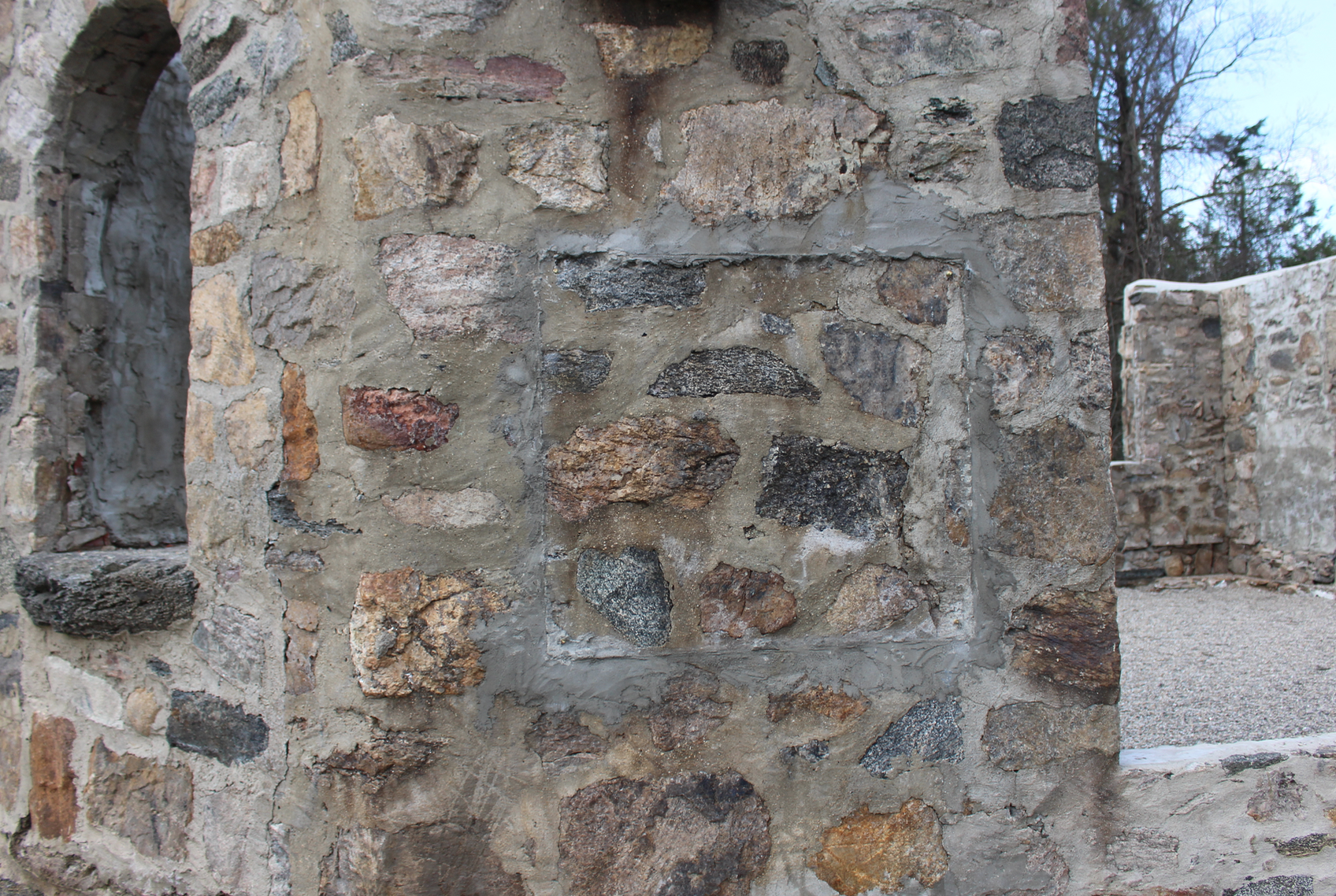 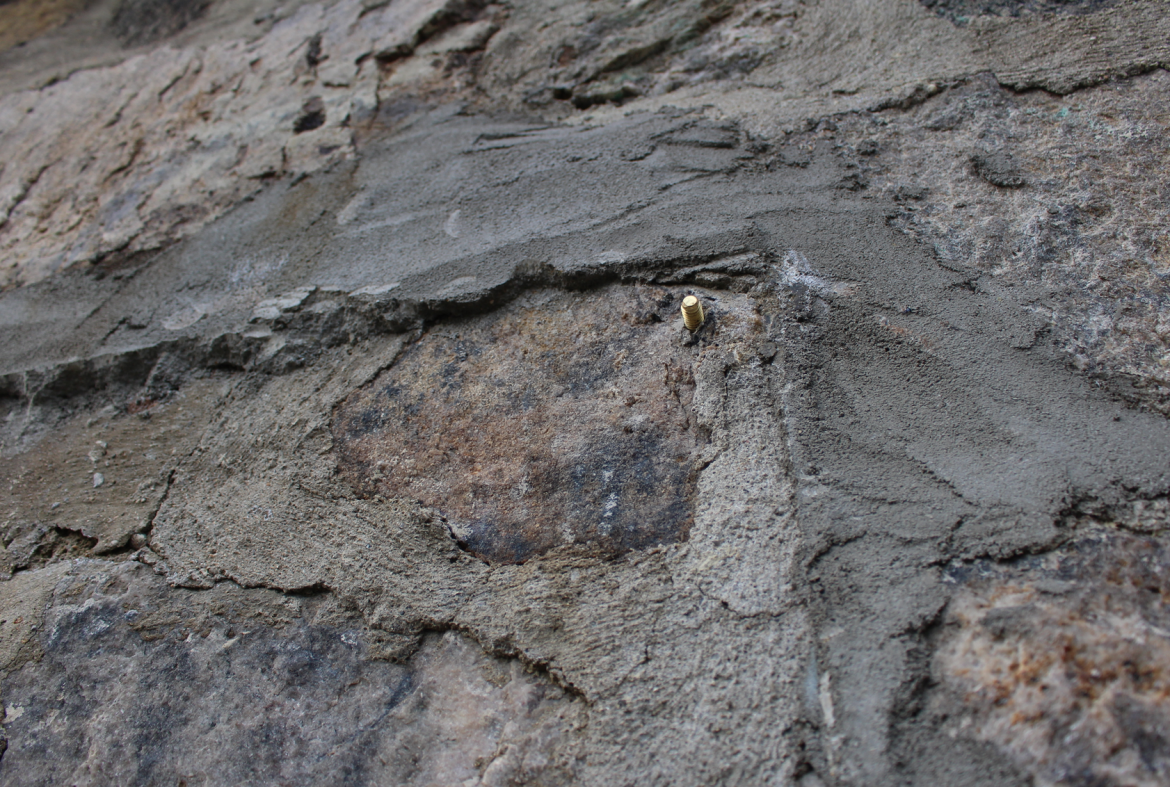 Last year, GFP reporter James Finn chronicled the history of the site, and what he described as a “sensitive demolition alternative.” He wrote that Ernest Seton’s connection to today’s Boy Scouts stemmed back to 1902 when he established a popular boy’s camp. Mr. Seton had surrounded his estate with a tall fence to prevent trespassers. This did not stop local boys from drawing lewd pictures and obscenities on the gate. According to the 1975 Greenwich Library oral history interview with Leonard Clark – one of the original members of Seton’s “League of Woodcraft Indians” – instead of going to the authorities, Mr. Seton had another plan in mind for the suspects. He walked into Cos Cob School, where the boys were enrolled, and invited the older boys to his home to do outdoor activities.

The abandoned mansion, which overlooked the Cos Cob Pond in the Pomerance, became an attractive nuisance. Graffiti and ivy covered the exterior walls. Beer cans, cigarette butts, soda bottles, and debris littered the grounds. The rich history of the home didn’t stop teens from partying or vandalizing the grounds – leaving Town officials with constant headaches. 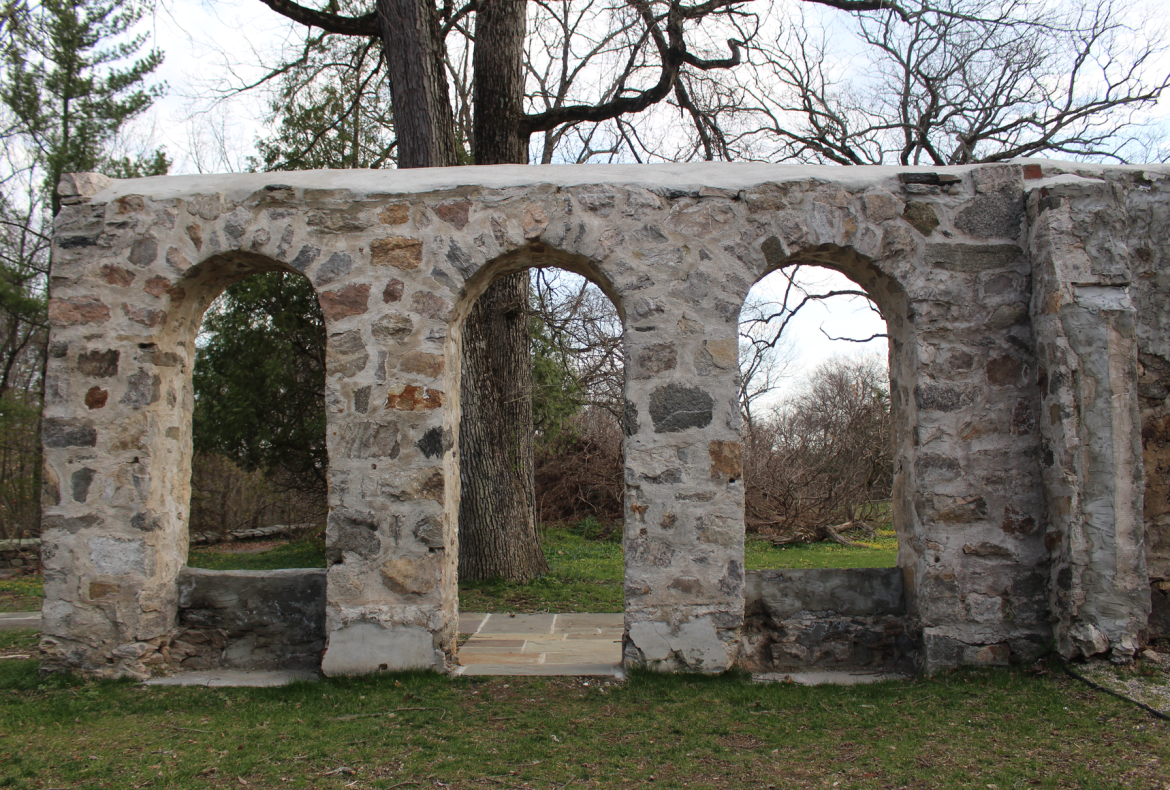 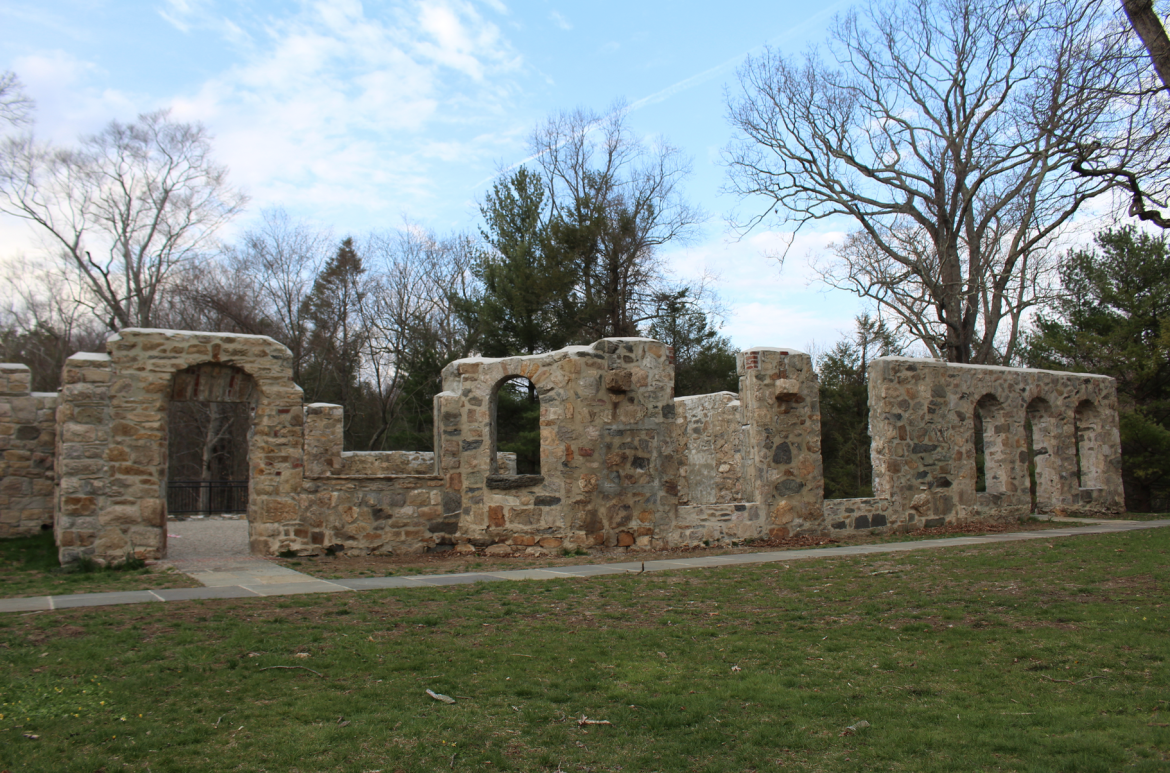 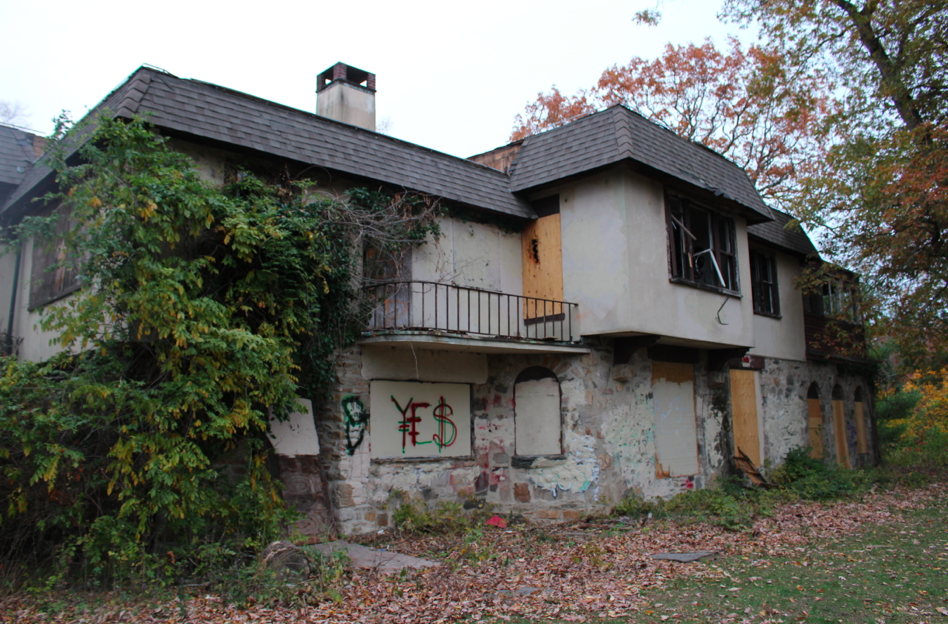 Before demolition, the mansion was frequented by vandals. Nov. 2014