On the grounds of the former Byram School, which closed in 1978 and later reopened as senior housing known as “McKinney Terrace,” there are 13 memorial plaques honoring alumni of Byram School, “Byram Boys” who lost their lives in the service of their country. 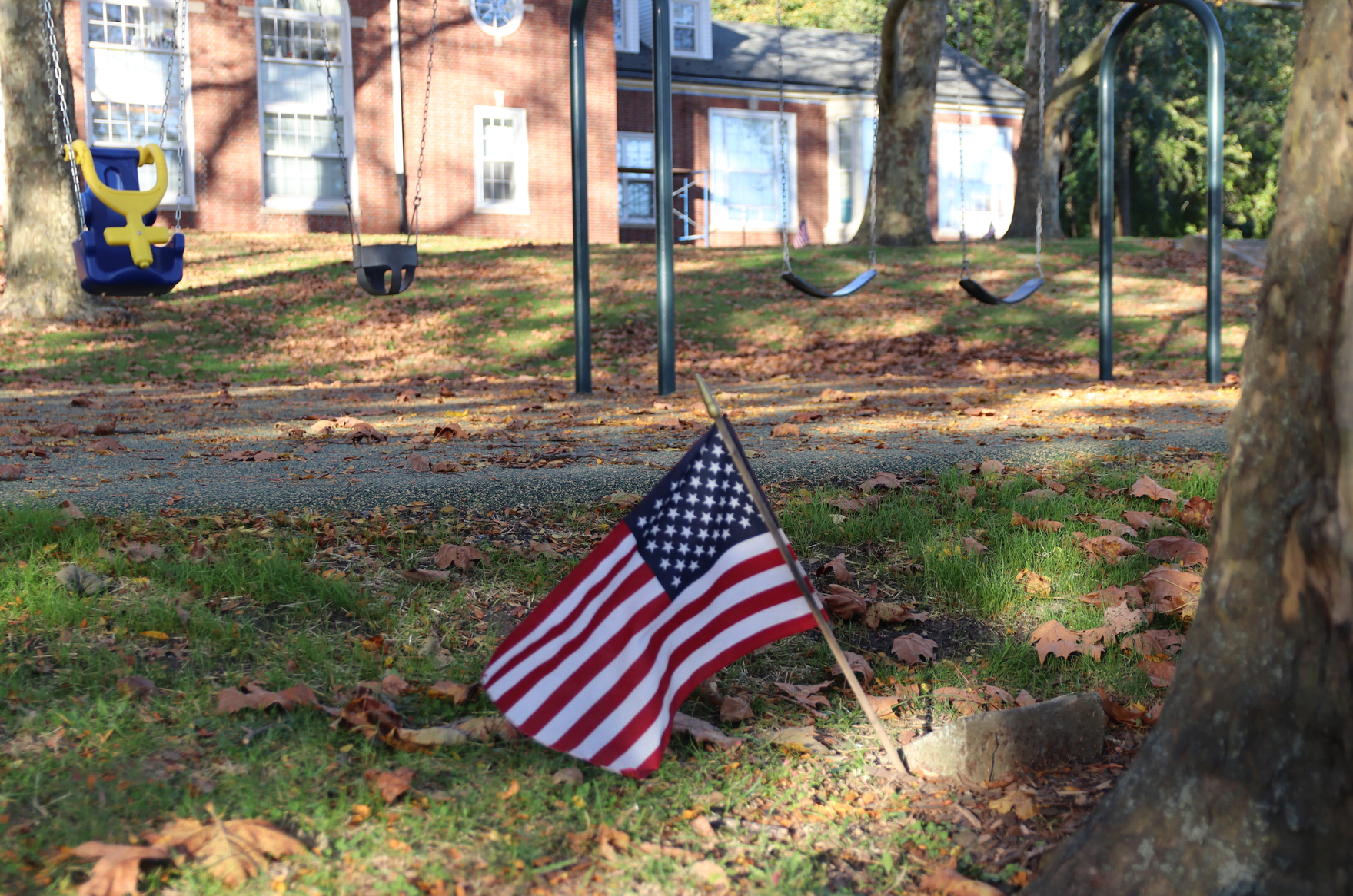 A memorial marker for an alumni of Byram School who gave his life in service for his country is inches away from the rubber mat underneath a new swing set. Oct 28, 2019 Photo: Leslie Yager 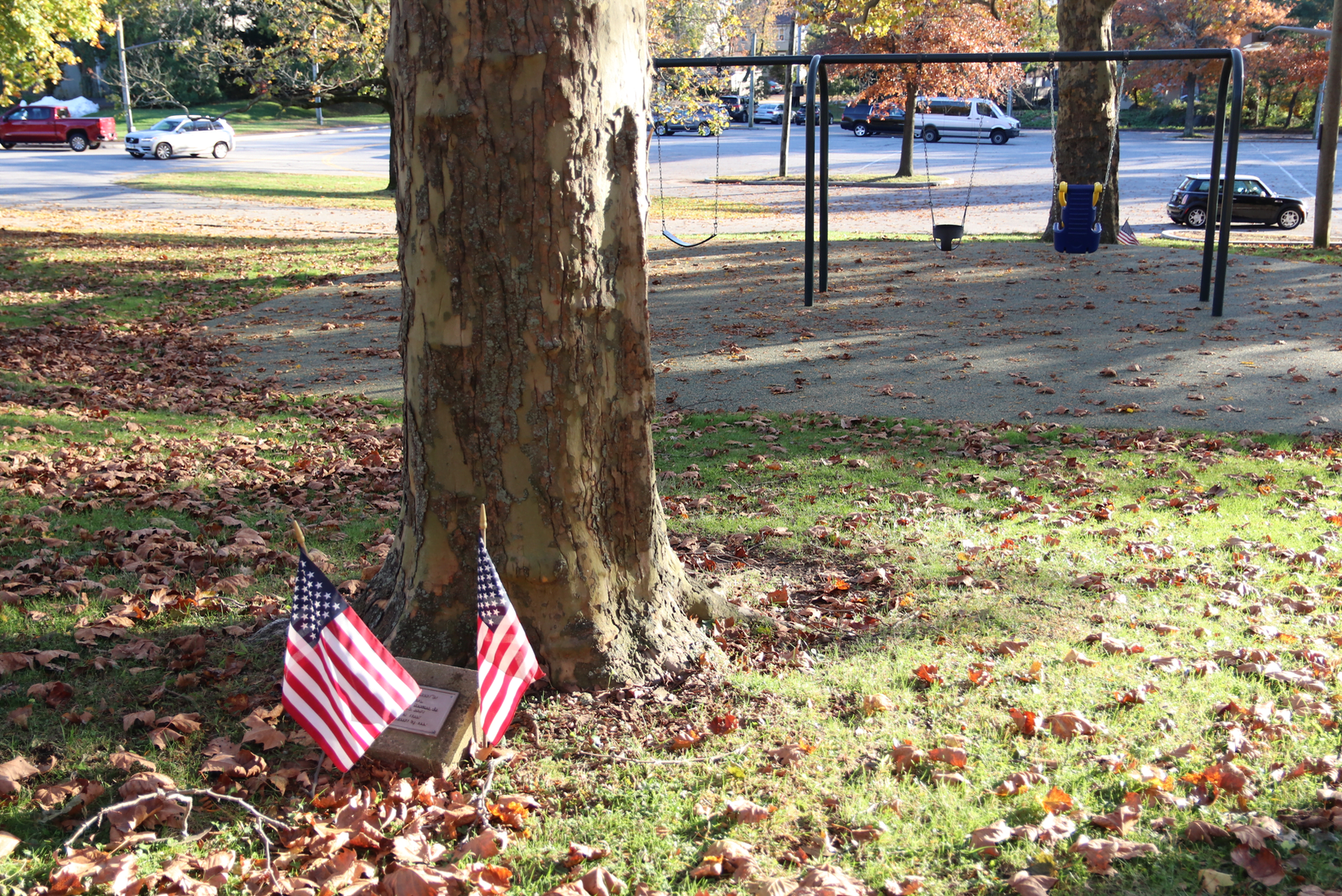 At the former Byram School a swing set and rubber mat adjacent to 13 memorial markers that honor men who served their country in World War II, Korea and Vietnam. Photo: Leslie Yager

Back in 1986, when the plaques were removed by the Town, and proposed to be returned a single marble plaque, local activist Anne M Kristoff led a charge to have the markers returned to their spots under the majestic Sycamores.

Every Memorial Day relatives of the fallen gather for a solemn ceremony, each family standing in the shade of the Sycamore trees by the marker for their loved one.

This week a veteran, David Wold, who visits the markers daily and makes sure there is a pair of American flags beside each marker, said he was shocked to see a brand new children’s swing set had been installed amid the markers.

“Local veterans visit the memorials on Veterans Day to remember the fallen,” Wold said, adding that he expects they will be surprised to see the swing set in their midst, especially considering there is a brand new fenced-in playground down the hill. 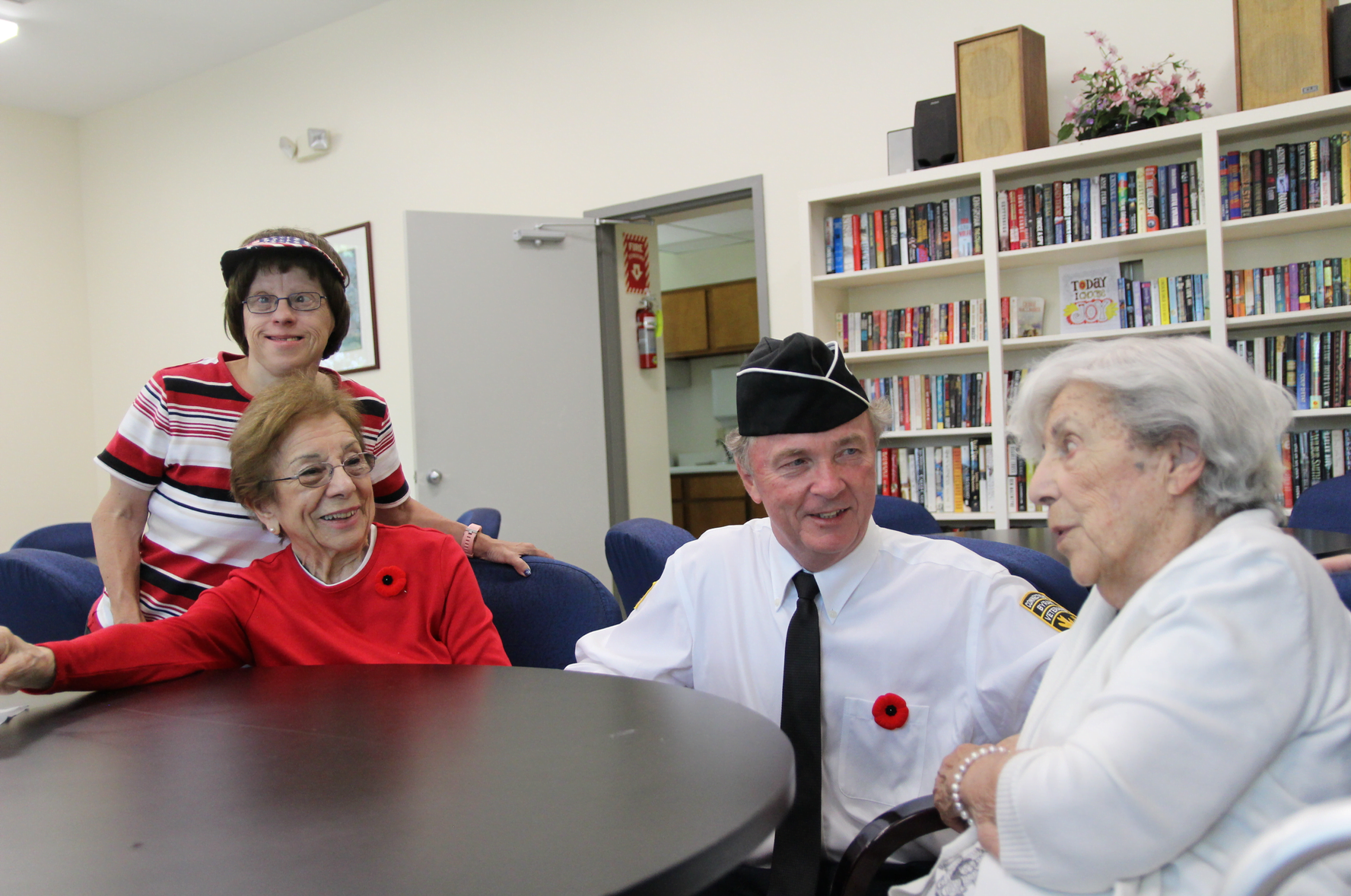 On Memorial Day Lisa Larusso, Millie Tiriolo Popp, David Wold and Grace Tiriolo LaRusso enjoyed refreshments provided by the Pecora family inside the former Byram School. On the grounds of the former school 13 trees are paired with markers for Byram residents who gave their lives in service. May 27, 2019 Photo: Leslie Yager 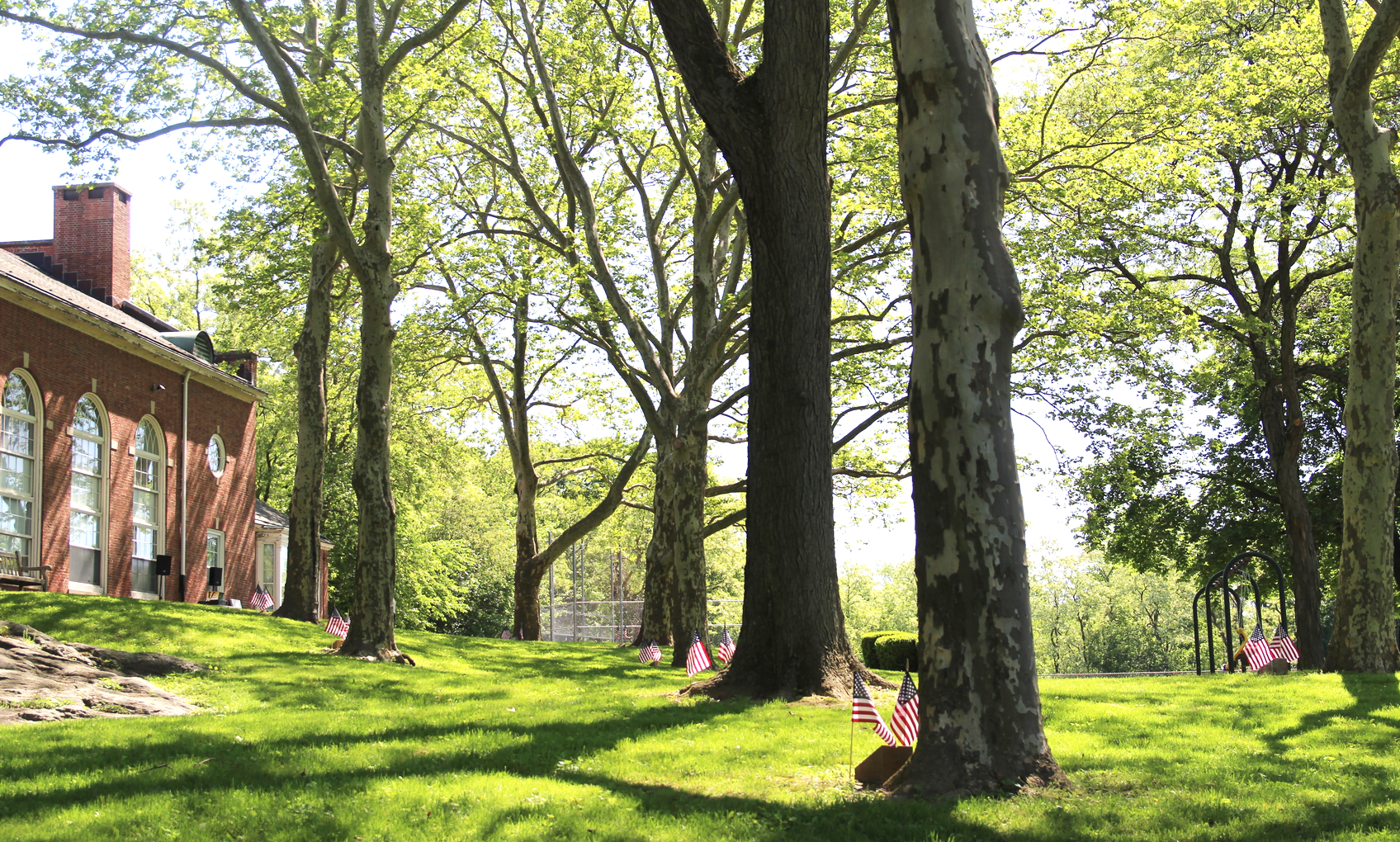 In the memorial grove 13 markers by 13 trees, each dedicated to a service person who lost his life for this country. May 27, 2019 Photo: Leslie Yager

On one corner the mat nearly touches one of the memorial markers.

“Why wouldn’t they install the new swing set in a more suitable space next to the fenced playground?” Wold asked. “This is sacred ground.”

“It is impossible for a single parent with two children to cover or see both swing set and playground.  On morning walks with my dogs I’ve walked by and straightened up the flags. Last Saturday I had to replace six of the flags closest to the swing set that had been pulled up,” he added.

The new swing set and rubber mat are inches from a memorial plaque honoring a Byram School alumni who gave his life in the service of his country. October 2019 Photo: Leslie Yager

“There were candy wrapping papers all over the mat under the swing set,” Wold continued. “The area with the swing set was never intended to be a potential playground, and with good reason.”

Kramer, who was appointed in March 2019, said he had done some research and learned that a swing set had been installed in the same location back in 2005.

At the time he said the town placed engineered wood fiber under the swing set.

“That wood fiber was removed late this summer and replaced with a permeable rubber surface,” Kramer explained. “It allows water to go through and there are no negative effects to the tree roots.”

Asked about the juxtaposition of the swing set and the memorial markers, and Mr. Wold’s complaint that the flags are being disturbed by children at play, Dr. Kramer said he believed it was more likely the result of the wind.

“I’ve been there and picked up flags. It’s the wind mostly,” he said, adding that he didn’t think it was inappropriate or disrespectful to have the swings amid the memorial markers. 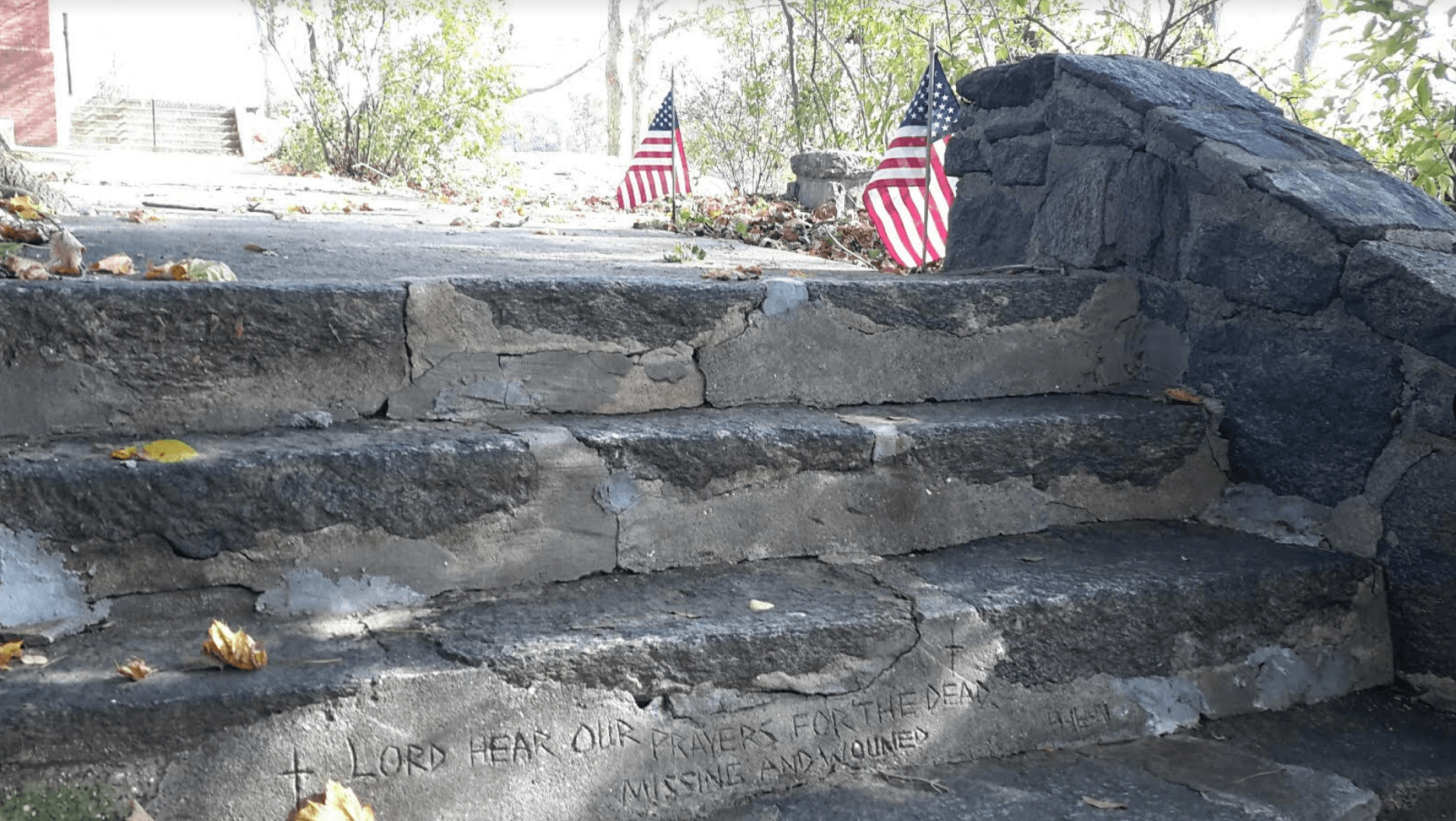 Inscription on repair work of steps at former Byram School say “Lord hear our prayers for the dead, missing and wounded.” Contributed

“It might be good that children are learning there are people who served their country,” he said.

Back in April residents visiting the memorial marker for Donald Repaci, who gave his life in Vietnam at the age of 20, were shocked to see the mature Oak tree at his memorial had been cut down by the Town.

Facebook was abuzz with outrage until Deputy Tree Warden Steve Gospodinoff jumped into the thread and explained that the Oak tree came down in a storm and he regretted it could not be saved.

“I was born and raised in Greenwich my uncles were war hero’s in WW2 as well as my dad a WW2 and Korean War vet. I hold this ground SACRED!” Gospodinoff wrote in his post. “Unfortunately this tree broke in half during one of our winter storms. We are going to replant another Oak Tree in that same spot.”

“In the future, if any other Tree is damaged in this area as a result of a storm. I will communicate with the Byram Vets,” he added.

In May the tree was replaced and the Town organized a ceremony which was attended by the Repaci family and friends. 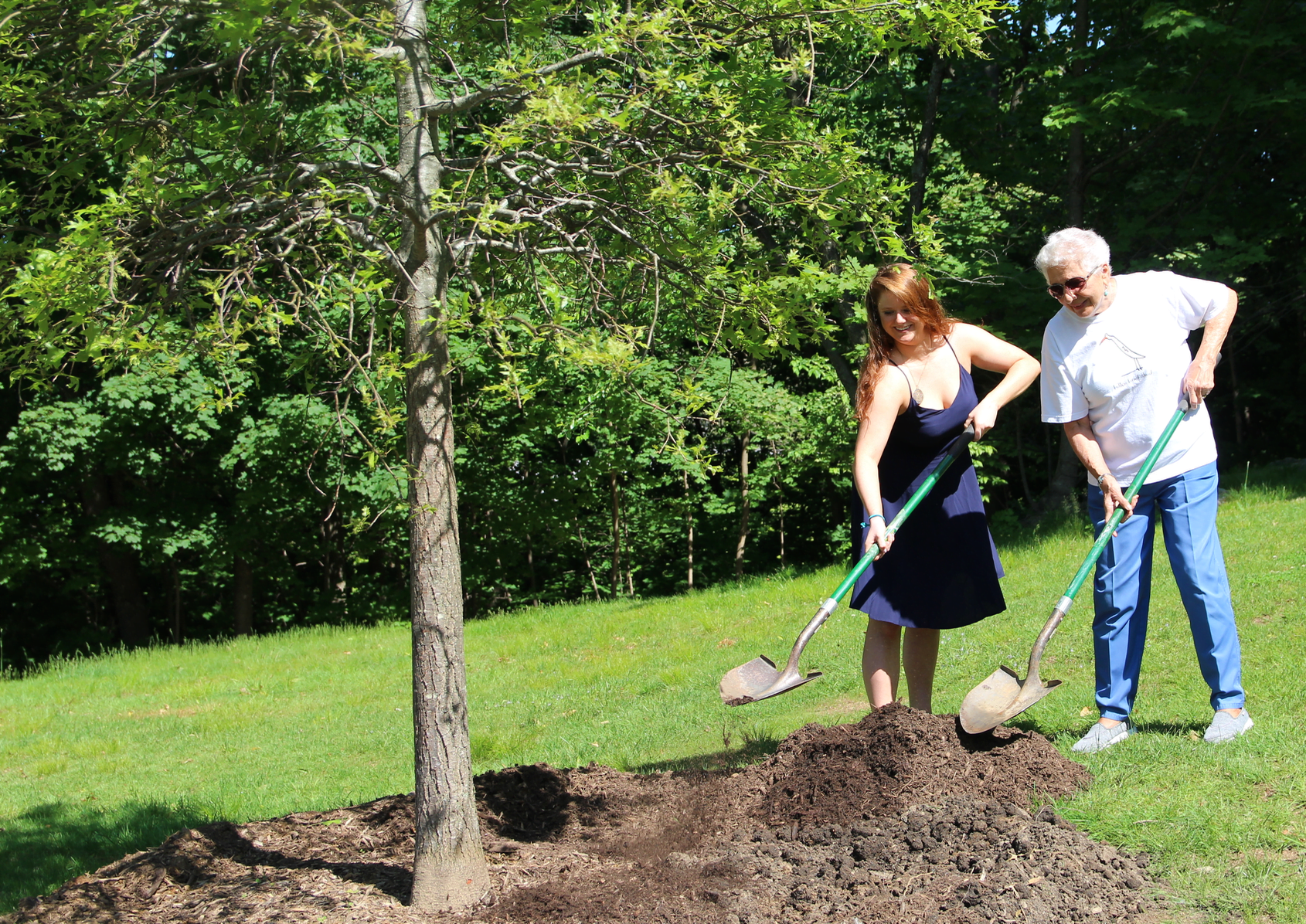